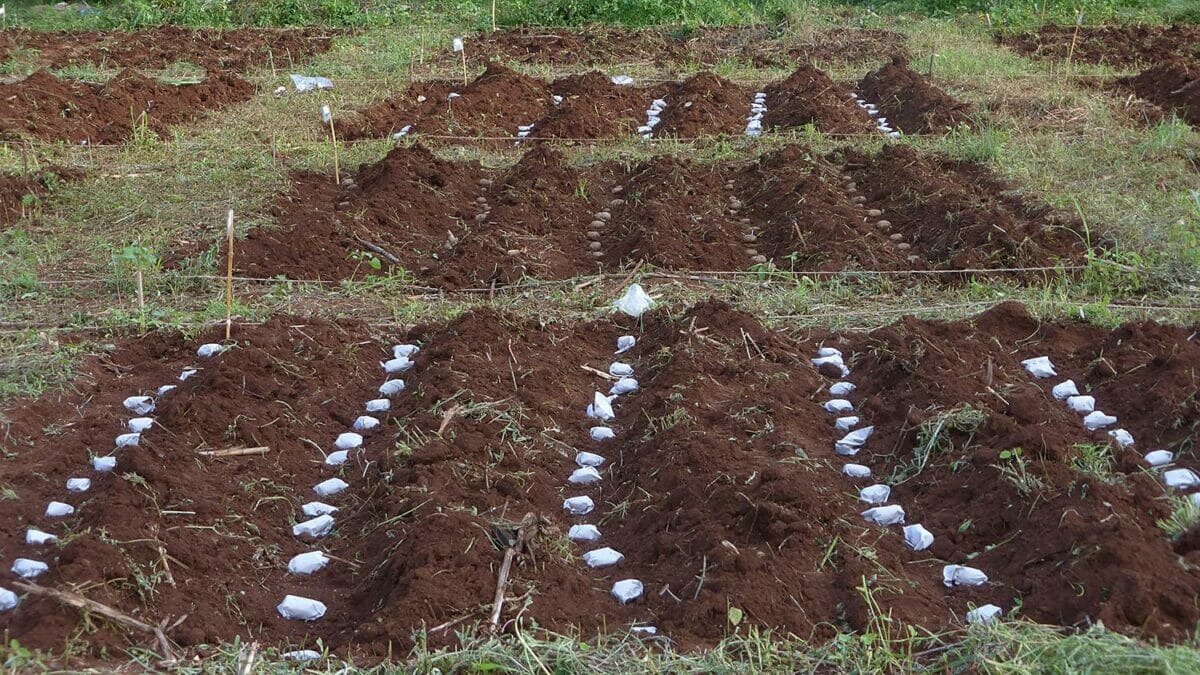 For a potato farmer, there are few moments as discouraging as a run-in with the potato cyst nematode, which causes yellowing leaves and stunted spuds to be covered in legions. The pest has been identified in 58 countries, where it has seeped into the soil and caused infection, diminishing crop yields.

Potato cyst nematodes are microscopic worms that latch on and burrow into the tuber’s roots, causing as much as 70 percent in yield losses. They can stay dormant inside mature cysts before migrating to potato roots,  causing irreparable damage.

Previous attempts to manage these worms involved alternating potatoes with other crops, spraying the soil with pesticides or planting disease-resistant varieties. However, agricultural areas with smallholder farmers often don’t have the means to afford those options or are in a situation where they don’t make sense to implement. Instead, certain farmers, like those in sub-Saharan Africa, have resorted to unsustainable clearing of forests as a method to rid their fields from parasitic nematodes.

But researchers have recently discovered a new approach to combat potato cyst nematodes. The low-cost, feasible and eco-friendly solution is…bananas.

Called “wrap and plant,” the method was published in Nature Sustainability. It utilizes paper created from banana tree fibers that would normally go unused. In their report, researchers, who worked with farmers in Kenya, were able to demonstrate how wrapping potato seed in the biodegradable material reduces the infestation and damage to the crop while also increasing yields as much as fivefold.

[RELATED: Why a New Potato Variety Could Be a Game-Changer for Farmers in East Africa]

A number of field tests were conducted to measure the paper’s effectiveness against the nematodes in Kenya, where the pest has been documented as a problem since 2015. These test groups involved seeds wrapped in banana paper dosed with low doses of abamectin (a pesticide that kills nematodes); seeds wrapped in paper without abamectin; seeds planted without any banana paper but in fields sprayed with abamectin; and seeds without banana paper wraps or chemical treatment.

Results showed that the banana paper, with or without the pesticide, prevented potato infestation in the field and increased potato yields and potato size. Potato root systems were denser when paper was used, too.

Additional lab studies were conducted that exposed the nematode to the chemicals released from young potato plants’ roots with and without the banana paper. “Nematodes love these chemicals; they stimulate the nematode’s growing process and inform the nematode about the best locations to infect the plant,” says Juliet Ochola, the study’s lead author.

In the published paper, researchers note the banana paper adsorbed 94 percent of these chemicals, such as alpha-chaconine, for example. “The banana paper—with or without doses of abamectin—disrupts the signaling between the potato and the nematode,” Ochola says. “ The nematode can’t detect those compounds, so it doesn’t grow and it doesn’t know where to infect the plant.”

As the banana paper reduced nematode hatching by 85 percent, researchers believe this tactic could dramatically reduce the need for pesticides in the future.

[RELATED: How California Crops Fought Off a Pest Without Using Pesticide]

In eastern Africa—not only Kenya, but also Rwanda and Uganda—this method could benefit millions of producers who rely on potatoes as a cash crop but have been grappling with the potato cyst nematode and can’t afford pesticides. In Kenya alone, the potato sector in agriculture is valued at $500 million (USD) annually, with 800,000 people directly benefiting from potato production and 2.5 million people receiving income from potatoes across the supply chain.

The potato has also been singled out as a crop that can play a vital role in achieving food security amid a growing population due to its adaptability, yielding capacity and nutritional value. According to the International Potato Center, a research organization focused on enhancing affordable nutritious food and related sustainable business opportunities, the potato is the third most important food crop in the world after rice and wheat in terms of human consumption. More than a billion people worldwide eat potatoes, and global total crop production exceeds 300 million metric tons.

Researchers are looking to commercialize the technology, which could further drive economic development in Africa and allow its farmers to produce plentiful yields. As wrapping each seed will be a laborious task, they hope a machine can be engineered to take on this part of the process. It’s possible, they say, that the approach could be more feasible on larger farms that use mechanical planters. They also plan to do further studies implementing the method on other vegetable crops.

Would wrapping a potato in a banana leaf reap the same benefits as banana paper? Where can banana paper be purchased or how can it be manufactured?

The paper system works by absorbing certain chemicals. Is this somehow specific to the banana plant paper, or could other materials be used instead? (Of course it is good to use the banana tree fibers that would otherwise go to waste, but in many places where potatoes are grown, banana anything will never be a locally produced item.)

where do I buy these banana wraps? Think wrapping in banana skins will do the same?