This Organic Mill is Helping Transform a Regional Economy

In Ohio, Shagbark Seed & Mill is trying to make local, organic grains the rule rather than the exception.

When Michelle Ajamian and Brandon Jaeger opened Shagbark Seed & Mill in Athens, Ohio, nearly a decade ago, there weren’t more than a handful of local mills in operation across the country.

In many towns, Athens included, signposts for Mill Street are the only reminders of the gristmills that once kept local economies self-sustainable and well fed for centuries. When Shagbark opened for business in 2010, it became the city’s first functioning mill since the 1970s. Its aim? “Make access to local organic grains and beans the rule rather than the exception.”

Shagbark was initially born out of their mutual frustration that beans and grains had fallen by the wayside of the farm-to-table movement. If heirloom tomatoes, pastured eggs and grass-fed beef could be purchased at nearly every farmers’ market, why not age-old nourishment like dry beans, wheat cereals and flour?

“We like to say that local staples are much more important than local kale because you can’t live on kale,” says Ajamian. “But we all know how so many people on the planet live on a combination of beans and rice.” 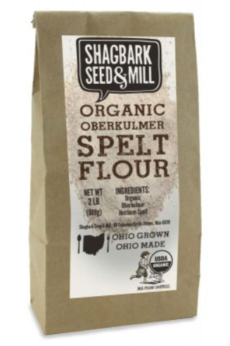 With the help of a grant from the United States Department of Agriculture (USDA) in 2007, they spent two seasons growing test plots of various bean and grain varieties, such as quinoa and adzuki beans, to glean whether they would thrive in southeastern Ohio. They launched the Appalachian Staple Foods Collaborative the following year and, with additional funding from the Sociological Initiatives Foundation and USDA, set out to build a scalable farm-to-table model with beans and grains at its core.

Ajamian and Jaeger taught themselves the ropes of certified-organic seed cleaning and milling and how to process and store grain. While they relied on trial and error to launch Shagbark, the Appalachian Staple Foods Collaborative is currently creating a website to better connect the expertise of millers, farmers, bakers and brewers across the country.

Shagbark processed 15,000 pounds of beans and spelt its first year. By 2017, the mill processed 300,000 pounds, including dry black and pinto beans (once an Appalachian staple), heirloom popcorn and cereal, and pasta and flour made with Oberkülmer spelt, all organically grown by regional farmers. 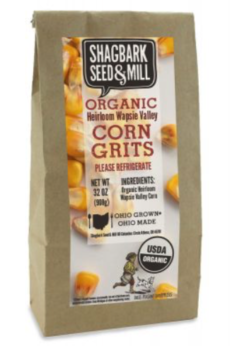 Wapsie Valley corn (an heirloom variety that dates back to mid-1800s Iowa) is milled for Shagbark’s grits, cornmeal and polenta, while a hybrid variety (better suited to the ancient practice of nixtamalization) is used for fresh corn tortillas, masa, tortilla chips and cornbread crackers. They’re also developing ready-to-heat beans for school cafeterias across Athens, hoping to expand beyond nearly 300 locations in the Midwest and on the East Coast that carry their products. As well, they’re considering testing small plots of upland rice (a dry-land variety that doesn’t require a paddy) in the years to come.

“What’s really amazing is that we’ve had farmers tell us something we never would have imagined: They say they’ve never tasted what they’ve grown before because it was grown on such a big scale,” says Ajamian, picking up a bag of Shagbark’s Corn-Maize Tortilla Chips. “Now they can go home with these chips and have the corn they grew in their fields.”

Yes! Support your own fellowmen is the new rule!

Related
MTMF
Could Caged Oysters Be the Future of the Industry?Michael Patrick Welch
MTMF
This Billboard Indie Folk Musician is Also Farm FolkAmanda McCracken
MTMF
This Santa Fe Restaurateur Combines Her Love of Food, Farming and DesignRobin Babb
MTMF
Meet the Winemaker Who Left California to Grow Grapes in VermontJulia Clancy
wpDiscuz
We use cookies on our website to give you the most relevant experience by remembering your preferences and repeat visits. By clicking “Accept”, you consent to the use of ALL the cookies.
Cookie settings ACCEPT
Privacy & Cookies Policy