This Santa Fe Restaurateur Combines Her Love of Food, Farming and Design

Erin Wade’s success with her Vinaigrette restaurant chain began with her experience as a farmer.

Becoming a farmer and restaurateur was a kind of career left turn for Erin Wade, owner and operator of Vinaigrette, the Santa Fe–based restaurant chain, and Los Portales, the farm that supplies greens and flowers for the restaurants. In 2002, she was working in fashion editorial in New York and about to start a semester at Istituto Marangoni, a fashion school in Milan. Just when it seemed like her fashion career was on track, she spent a summer in Santa Fe and fell hopelessly in love with it. “Santa Fe just kind of called me back,” she says.

Wade’s family had long owned the 10 acres of land in Nambe, just north of Santa Fe, where she landed in 2003 after a year of studying in Italy, but the house and land were in total disarray. That gave Wade plenty of work to do while she was contemplating what to do with her life. Little did she know that the land would become a long-term project and a key element in her wellness-focused restaurant chain. Walking around her farm now, more than 10 years later, you can see the endless hours she has poured into it: dozens of rows of raised beds, a greenhouse, a 10,000-gallon rainwater tank, two chicken coops (with dozens of Barred Plymouth Rock chickens) and a handful of charismatic goats and potbellied pigs.

“This was where I started planting,” says Wade, as we walk by the rows directly behind the main house. “I tested the soil in 2005 and it all sucked, but this sucked the least, so we started planting cover crops.” Now, this part of the farm grows lettuce and other salad greens using French intensive raised beds, which allow for more root space per square foot. “We harvest about 25 pounds of lettuce per bed,” says Wade. “They’re shockingly productive.” The rows are already seeded for spring, with sheets covering them to keep seeds from flying away in the strong New Mexico winds. 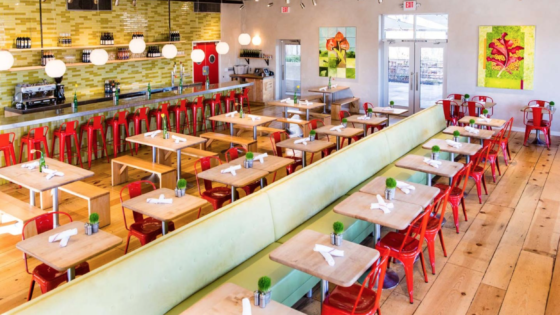 On another acre, Wade grows tomatoes and chili peppers, and there are some vermiculture beds that are helping to improve the dry soil. About an acre of raised beds is dedicated to growing flowers that also go to the restaurants for decoration.

“In this field, I want to plant some things that take less water, like lavender or maybe some wine grapes,” says Wade, as we walk across a fallow field. Not every acre of the farm has been reclaimed yet, but Wade is perpetually trying new things. She hopes that the farmer/restaurateur business model will become more common in the future, as it guarantees transparency and ingredient quality on the restaurant side and ensures a steady demand on the farm side.

In her headlong rush into success in the restaurant world, Wade says that the farm has taught her a lot about slowing down and observing before she acts. “When I first got here, I did everything wrong,” she says. “I was coming to find answers on the land in a way, but I brought this very American attitude of ‘We’re going to fix this up and do this right away,’ which isn’t very New Mexican. These are old, funky properties, you know. You can’t do that ‘conqueror’ thing here.”

Related
MTMF
This English Farmer Grows Yorkshire Rhubarb in the Dark and Harvests by...Mónica R. Goya
MTMF
Russia Just Got Its First CSAStephan Sveshnikov
MTMF
This is One of the First Farms in the Pacific Northwest to...Lauren Turner
MTMF
This Spirulina is Straight from the Farm and Ready for Your SmoothiesJeff Spurrier
wpDiscuz
We use cookies on our website to give you the most relevant experience by remembering your preferences and repeat visits. By clicking “Accept”, you consent to the use of ALL the cookies.
Cookie settings ACCEPT
Privacy & Cookies Policy