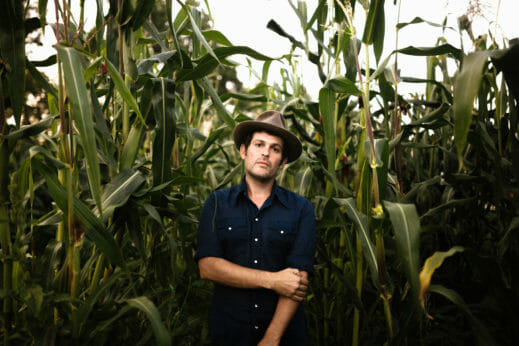 Indie folk musician and farmer Gregory Alan Isakov might be the only top 10–ranked Billboard musician, watering his garden beds while touring the road via Bluetooth sprinkler system. On an average day in May (once touring has ended), Isakov is working in his sucrene lettuce bed on a four-acre farm in Boulder, Colorado. Come twilight, he is writing lyrics or recording music with bandmates in his soundproofed barn. It’s no surprise that the title of his latest and fourth full-length album is titled Evening Machines, composed of songs like “Dark, Dark, Dark” and lyrics like “I’m a ghost to you/You’re a ghost to me.” His connection with the land echoes through the songs that have drawn crowds on his sold-out North American tour.

As for his two passions of farming and music, one rhythm nurtures the other. Farming provides experience to feed Isakov’s music. “A lot of musicians struggle when their whole life is touring all the time, staring out the window of a van,” he says. “There’s not a lot of experience there to draw from.” 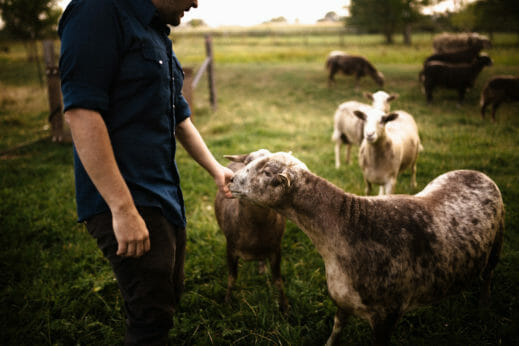 One of the reasons why farming is so satisfying for the soft-spoken musician is being able to see progress. “I’ll work 10 hours and I can see what I did: Eight beds are prepped, and three are planted,” says Isakov. “With music, a month will go by with constant work and you don’t know what you’re going to keep. You don’t know what’s going to make you feel anything later.”

Farming has given Isakov two of the most important things in songwriting: a sense of space and time. “Songs are a lot like farming,” he says. “There is a natural time you need to give things, and it’s really important to have that time away to really let things breathe a bit.”

When Isakov gets stuck on a piece of music, he says he’ll work in the gardens and the song will take care of itself. “There have been songs I’ve slaved over and written crazy arrangements for,” he says. “I’ll go away from a song for a while and come back and think, This doesn’t make me feel anything. I think that’s because I didn’t give the song the time it wanted.”

The constant planning ahead in farming gives his left brain the workout it doesn’t get much with music making. Isakov sells garden produce, such as turnips, beets, carrots and lettuce, to six local chefs and a small market. “My cold storage is really limited,” he says, “so I can’t harvest too many days in advance. I need to have everything dialed.”

Isakov also sells three varieties of heirloom seeds and is on his fifth generation of Chihuahua blue corn. “It gets better each year because it knows my soil,” says Isakov. Entering his sixth season on the farm, Isakov finally feels like he knows his own soil. The life of a musician can be a transient one, and the farm is keeping him rooted. 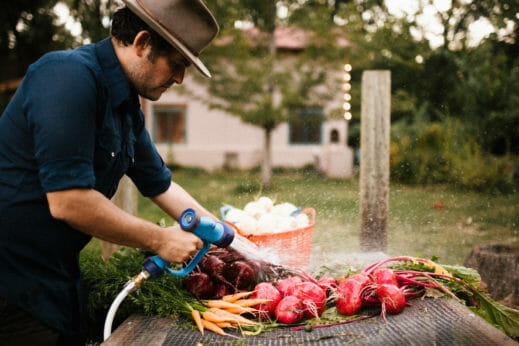 Born in South Africa and raised in Philadelphia, Isakov studied soil science at Naropa University in Colorado and gathered more experience while working for a year at Findhorn Foundation Gardens in Scotland. Place has always informed his music, and now Isakov draws inspiration and knowledge from visiting other farms while touring around the world in the winter months. He also finds peace knowing that he can stare south out his window at any time and have a sense of what’s happening on the farm. “That sort of familiarity has a profound effect on me,” he says. And he knows how to harness that familiarity. Despite playing dozens of times in sold-out venues, Isakov admits that he still gets nervous when performing in front of a group of people. The solution: place and time. “I picture the place where I wrote the piece of music when I’m playing it so that I can really make sure my body remembers all the lyrics,” he says. “I’ll go to the edge of my driveway on my farm, where I finished a song, and everything else falls away.”

Hello Amanda, I read your article. It is amazing and easy to understanding. And your writing skill is excellent. I got lots of knowledge..Keep it. Thank you.

Love the musical work of Gregory, glad to know he’s a farmer and man of the land as well.

What is the bluetooth sprinkler system he uses while on the road? (referenced in Modern Farmer Weekly Digest email)
Thank you!

I had no idea! I like his music and am a gardener. It’s all coming together!

Can you fall in love with someone without ever actually meeting them?

Related
MTMF
This Santa Fe Restaurateur Combines Her Love of Food, Farming and DesignRobin Babb
MTMF
This English Farmer Grows Yorkshire Rhubarb in the Dark and Harvests by...Mónica R. Goya
MTMF
Meet the Winemaker Who Left California to Grow Grapes in VermontJulia Clancy
MTMF
Russia Just Got Its First CSAStephan Sveshnikov
wpDiscuz
We use cookies on our website to give you the most relevant experience by remembering your preferences and repeat visits. By clicking “Accept”, you consent to the use of ALL the cookies.
Cookie settings ACCEPT
Privacy & Cookies Policy