Could Caged Oysters Be the Future of the Industry? - Modern Farmer
MTMF

Could Caged Oysters Be the Future of the Industry?

Cage farming costs less than the traditional method of purchasing and dumping large rocks on an oyster lease, spreading some seed and hoping for the best.

During times when traditional farmers can be found working their soil, Brandi Shelley and her father and brothers are out on the water on Bayou Hertesa, near Port Sulphur, Louisiana, tending to dripping wet cages full of growing oysters. 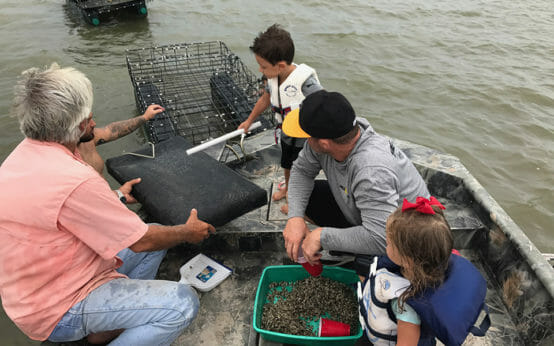 “The summer is the busiest season for us,” says Shelley of the new business her father started in 2017 after many years of traditional oyster farming. “In the summer here, the algae grows so fast, you have to clean the cages a few times a week to keep the water and nutrients flowing through.”

But Shelley is happy to report that Shelley Farms stays relatively busy all the time because the cage technology allows them to harvest oysters all year round.

Fans of the Gulf’s seafood are familiar with the warning “Eat raw oysters only in months that contain an R!” As Shelley explains, “That’s because during the summer, wild oysters spawn and, when they spawn, they shrivel up and get milky.” Cage-farmed oysters, on the other hand, begin as triploid seeds. “Triploid oysters are genetically designed to not breed,” says Shelley, “so they retain a nice size, shape and texture all year round.” Cage farming also costs less than the traditional method of purchasing and dumping large rocks on an oyster lease, spreading some seed and hoping for the best.

Following an initial permit process that lasted almost three years, Shelley and her family began buying two-millimeter-long triploid seeds in sacks of 5,000. Traditional oyster farming involves laying tons of big rocks down in a leased plot of water and then spreading seed on those rocks and hoping for the best. Oyster larvae generally face predators and other challenges, so most never make it to a restaurant.

Protected in cages, almost all of Shelley’s oysters peacefully mature in eight to 10 months. “Whenever we have an order, we’re able to just go out and harvest it,” she says.

Oysters are now cage grown all over the United States. Louisiana State University even runs a giant lab dedicated to growing triploids for its oyster farms in Grand Isle’s Caminada Bay. As such, plenty of companies now make the gear. The Shelleys use the OysterGro system’s thick, rubber-coated metal cages. Instead of a tractor, the family steers a boat equipped with winches to haul up cages that grow heavier by the week.

To be labeled with the coveted “white tag” status by the U.S. Food and Drug Administration (which means that they’re safe to eat raw), Shelley’s Delta Pearl brand bivalves must be refrigerated within an hour of leaving the water during the summer and 36 hours during the winter. “Once back on land,” explains Shelley, “we tumble them in a machine, clean them, box and weigh them and send them to the restaurants.”

The Shelleys still keep leases on land where they harvest wild oysters, but Shelley’s father doesn’t see much of a future in traditional ways. “My dad has been in the oyster business for 40 years, and he has seen how the environment and Mother Nature aren’t reproducing oysters like in years past,” reports Shelley. “Cage-farmed oysters are the wave of the future.”

The Shelley family is my brother and daughter. I’m so proud of them the way they’ve learned what is best to make their business more profitable. After 40 years harvesting wild oysters, it’s time for Mr. Shelley to take the easy road. I wish y’all much success in your new business. I’m so proud of my niece for taking on this new journey along side of her dad. I know you will be the talk of the BAYOU!

Related
Animals, Lifestyle, MTMF
Meet Modern Farmer’s Guest Instagrammer: Forty North Oyster FarmsAndrew Amelinckx
Animals, Food & Drink, Plants
Oysters With a Day JobAdrian Shirk
Environment, Food & Drink
The Gulf Oyster Situation Is Very Bad, But There’s HopeDan Nosowitz
Small Ocean “Hot Spots” Could Provide All the Seafood We NeedDan Nosowitz
wpDiscuz
We use cookies on our website to give you the most relevant experience by remembering your preferences and repeat visits. By clicking “Accept”, you consent to the use of ALL the cookies.
Cookie settings ACCEPT
Privacy & Cookies Policy