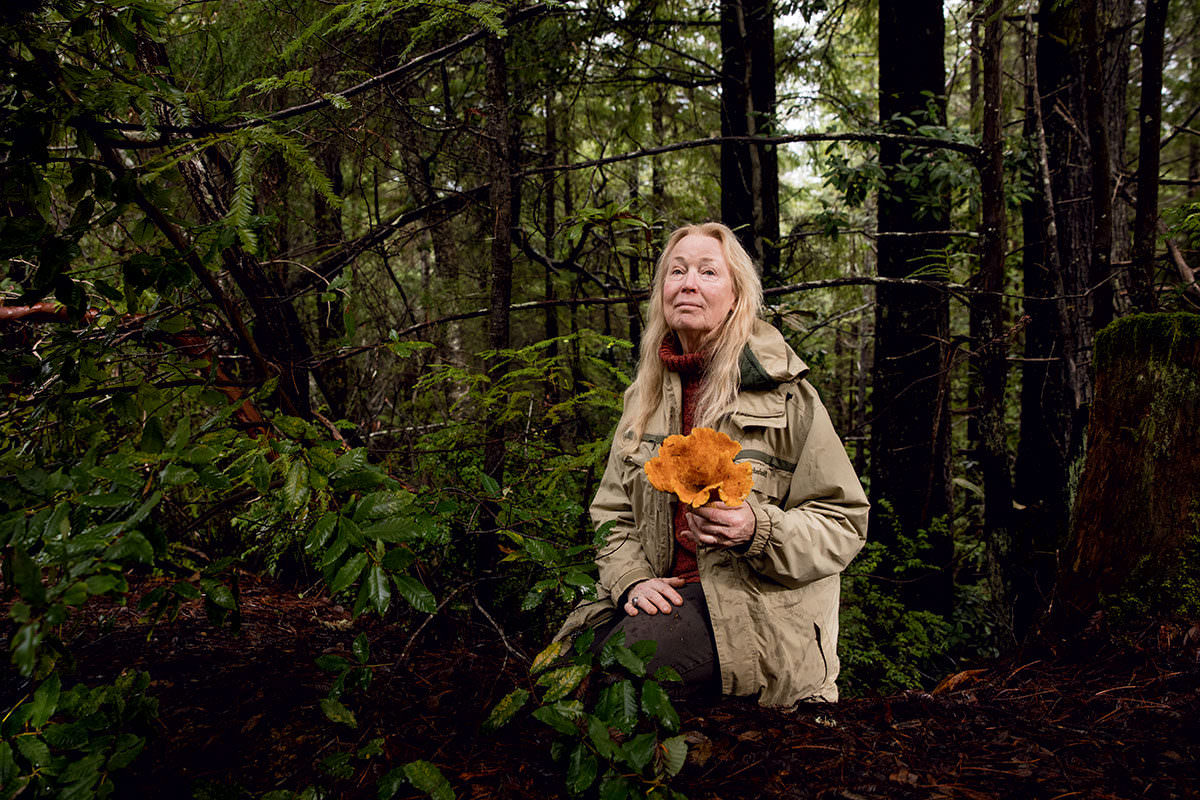 Connie Green, of Wine Forest Wild Foods in Northern California, relies on the region's Jackson State Forest for many of the wild mushrooms she sells to top-notch chefs, including Thomas Keller and Michael Chiarello. (Alas, this particular scaly chanterelle, though beautiful, is not edible.)
Share
Tweet
Pin
Email
3K Shares

Each autumn, as heavy rains bring chanterelles and porcini out of dormancy, small signs reading “mushroom buyer” begin to dot the Redwood Highway leading into Willits, a Northern California town known equally for its trade in redwood lumber, marijuana, and wild mushrooms. Across the highway from Taco Bell sits a shady-looking motel, where Connie Green has set up shop at a folding table cluttered with plastic baskets, a scale, and a cash box, plus a plate of fine cheese to share. “I’m part of the slick, slick food world, New York and San Francisco and all that,” says Green, owner of Napa’s Wine Forest Wild Foods, which supplies mushrooms to chefs Thomas Keller and Masaharu Morimoto. Green’s long, sun-bleached locks and perpetually dreamy expression give her a fairy-godmother aura, though the fat stub of a cigar in the 66-year-old’s hand when I arrived in Willits last winter suggested other sides to this character’s character.

Green brokers mycorrhizal species, which depend on certain trees, in certain habitats, and thus can’t be cultivated like grocery-store buttons or shiitake. Her fungi require foraging, often on government land. And the Jackson State Forest near Willits proves a prime hunting ground for wild mushrooms both popular and rare, including sweet candy caps, enormous lobsters, and homely matsutake – with a scent that noted mycologist David Arora has described as “a provocative compromise between Red Hots and dirty socks.”

Green, who moves roughly 5,000 pounds of mushrooms each week, pays top dollar, making her a real fairy godmother to the transient populations of Willits and other towns along the West Coast’s commercial foraging circuit, which stretches north to Alaska. The United States Forest Service demands that mushroom pickers secure permits and regulates when, where, and how much can be harvested on public acreage, but the agency doesn’t ask for Social Security numbers.

Many pickers lead semi-nomadic lives, sleeping in cars or camping in the woods.

Many pickers, says Green, lead semi-nomadic lives, sleeping in cars or camping in the woods, because they’re unable to hold down normal jobs due to substance abuse, mental illness, or legal trouble with the IRS or INS. Some have been hiding out here since returning from the Vietnam War with the kind of deep psychological scars that stunt social reintegration. “This profession offers a sense of freedom. We’re an odd, spread-out family,” she explains of the vets, burned-out hippies, disaffected loggers, Mexican immigrants, and Cambodian and Laotian refugees who comprise the underground industry.

These folks have no desire to be interviewed. Green did introduce me to her longtime Willits buyer, a soft-spoken, chain-smoking man who requested that his name not be published. She also took me to hunt hedgehog mushrooms alongside a picker I’ll call “Joan.” Pigtailed, with a Harley-Davidson cap pulled low over her face, Joan discovered a huge, potentially valuable cauliflower mushroom. While we loaded an SUV with crates bound for Napa, Green turned to Joan – clearly an old friend – and asked, “How much vegetation do I have in my hair? I hate when I walk into a restaurant and don’t realize I’m carrying half the forest with me.” 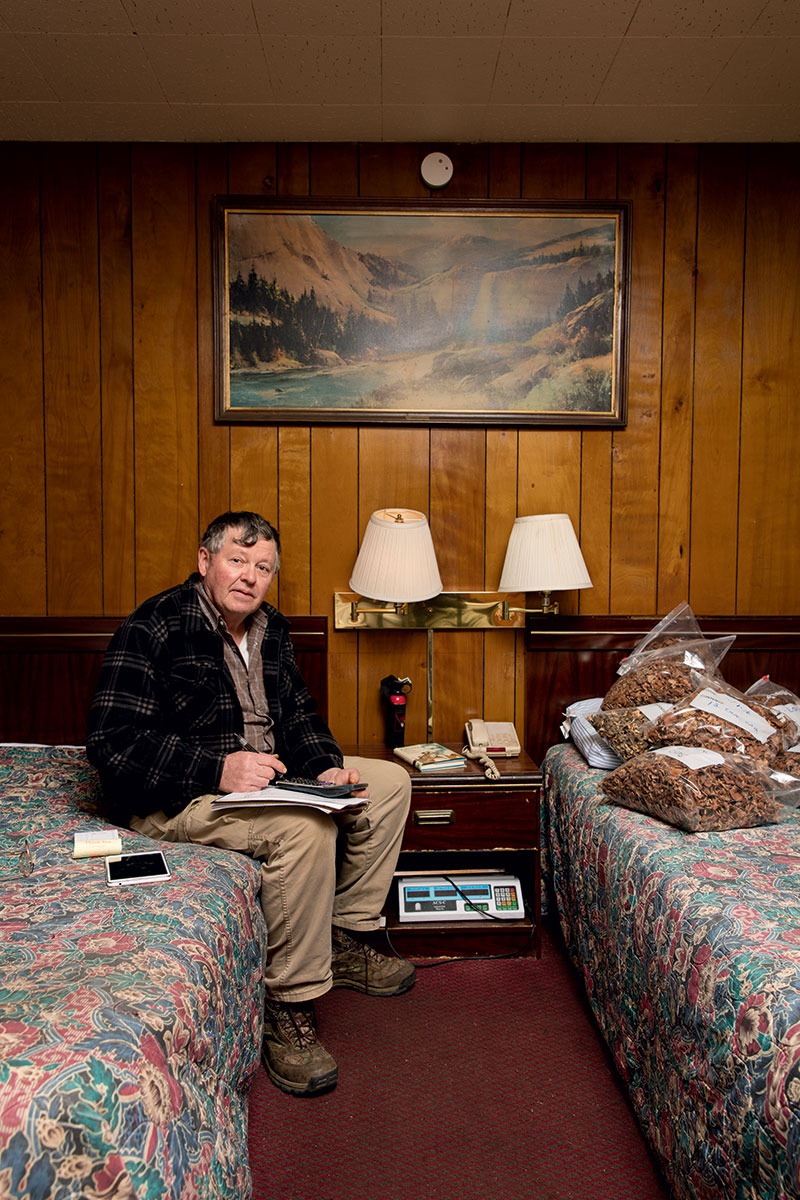 Green’s longtime Willits buyer (who prefers to remain nameless, like most people in this industry) balances the day’s haul against the books. 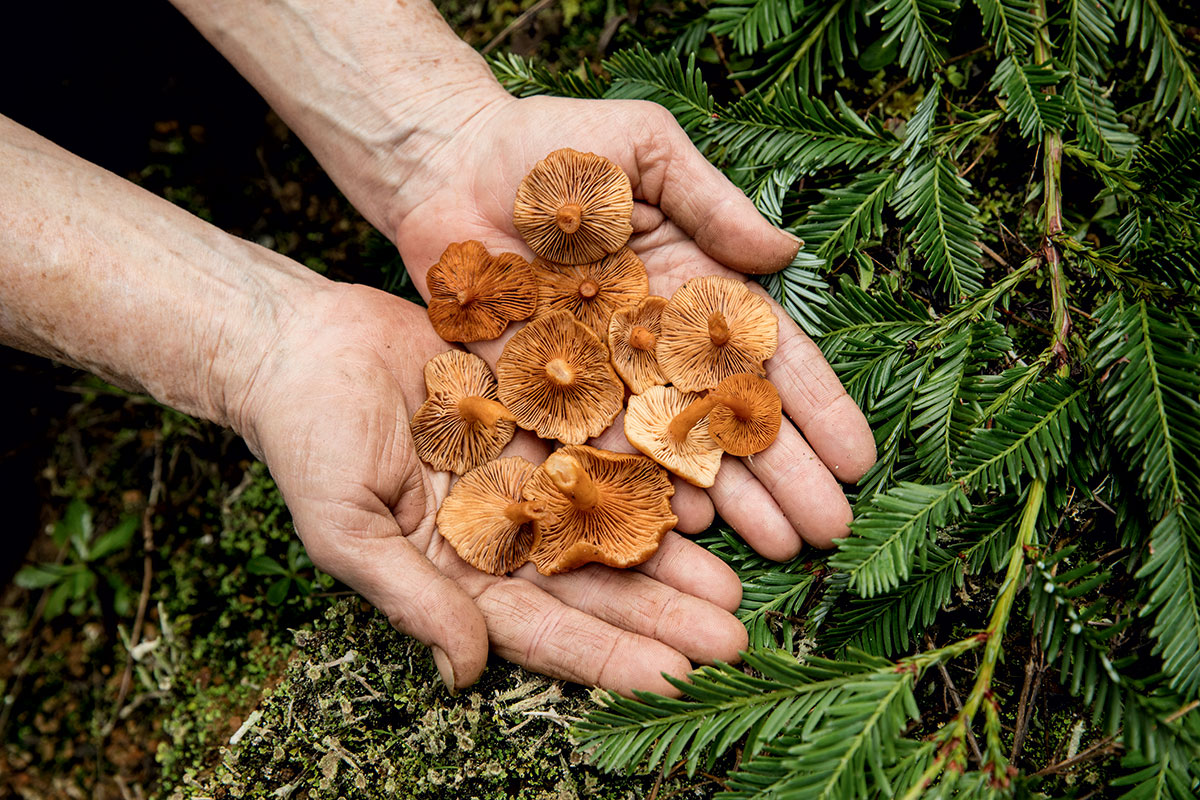 Green shows off a cache of candy cap mushrooms, which boast a velvety texture and a maple syrup”“like flavor. 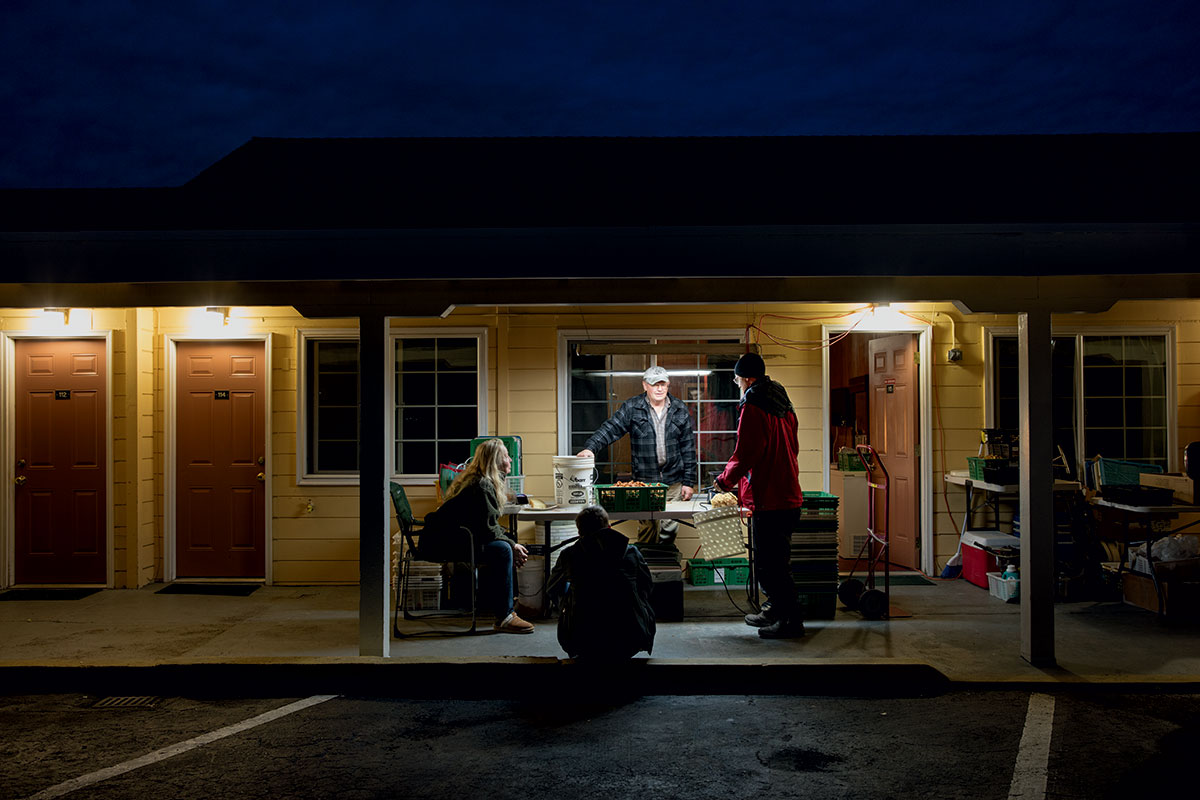 Green (far left) presides over a makeshift buying station at a motel in Willits, CA.

The mushroom-foraging landscape has become increasingly crowded – and complicated – in recent years. Some of the older pickers I spoke with seemed openly resentful of newcomers. Etiquette dictates that young fungi are left alone until mature enough to deserve harvesting, but inexperienced and overzealous foragers tend to grab the little guys. “We call that baby rape,” declares Green. She encourages pickers to spread the spore-holding bits of mushrooms from the bottom of their buckets as a way to seed future crops.

Her Wine Forest Wild Foods is far from the only high-profile mushroom-brokerage firm on the scene these days. Some 35 miles west of Willits, Eric Schramm’s Mendocino Mushrooms (whose clients include that town’s renowned MacCallum House restaurant) operates out of a trailer parked near a scuba shop. According to Schramm, one of Green’s chief rivals, the high value of the product, coupled with remarkably scant regulatory oversight, creates a cutthroat business environment: “The whole game is to have something nobody else does. It’s like any commodity driven by supply and demand. You’ve got to understand the market.”

On the afternoon I visited Schramm’s buying station, foragers arrived around 4 p.m., pants soaked, knees and palms muddy from a day spent in the woods. A glut of yellow foot mushrooms drove the price paid to pickers down to around $2 per pound; another, more elusive, chanterelle, the black trumpet, brought upwards of $10 per pound. “There’s usually an adversarial relationship amongst companies like mine and the local buyers and pickers,” admits Schramm, 65, referring to one of his nemeses as “Dollar-More-a-Pound Mike.”

Schramm recalls the closure of an enormous expanse of national forest near Yosemite Valley following the Rim Fire in 2013, the third-largest burn in California history. Such disasters leave an easy, and lucrative, harvest for pickers. “That fire produced about $20 million in morels, and we couldn’t touch them,” he says. “That’s $20 million that would’ve gone back into the local economy.” Green agrees: “It was wacko. And I mean wacko. They had helicopters looking for pickers and were giving out $1,500 fines. The Forest Service treats us like a tribe of gypsies trying to steal from them.” 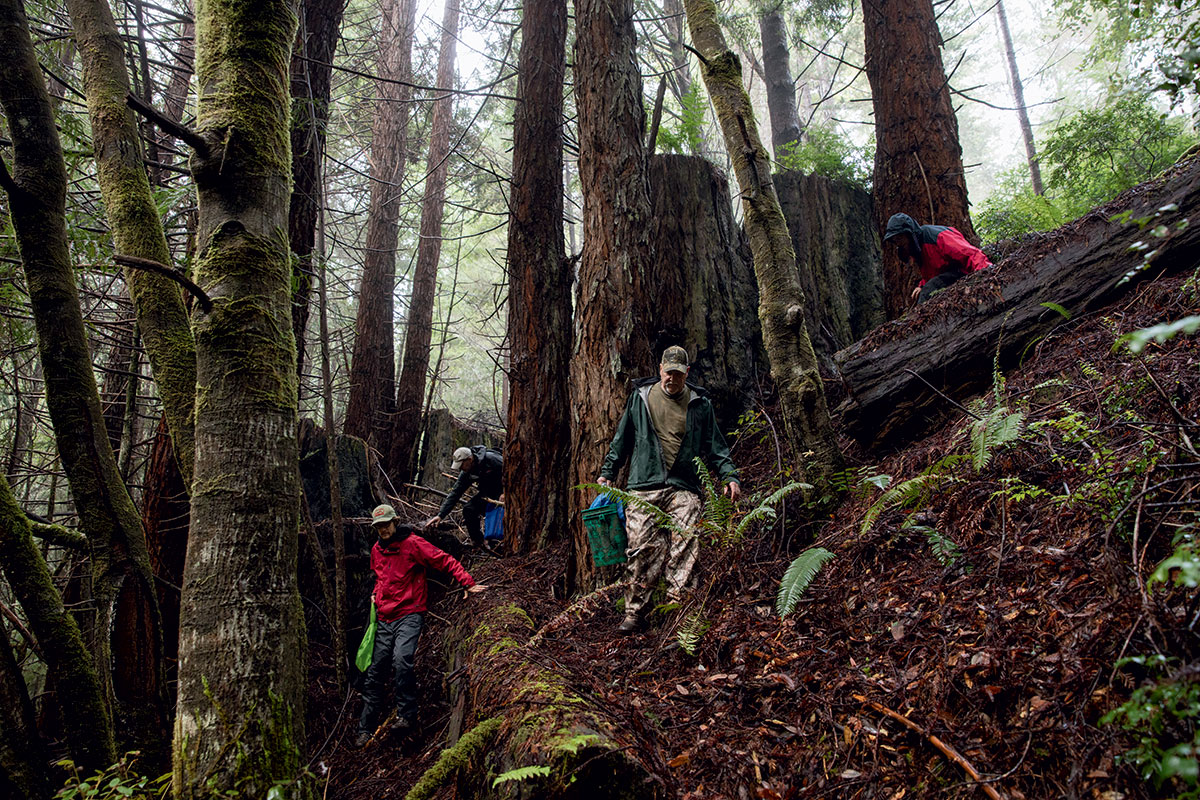 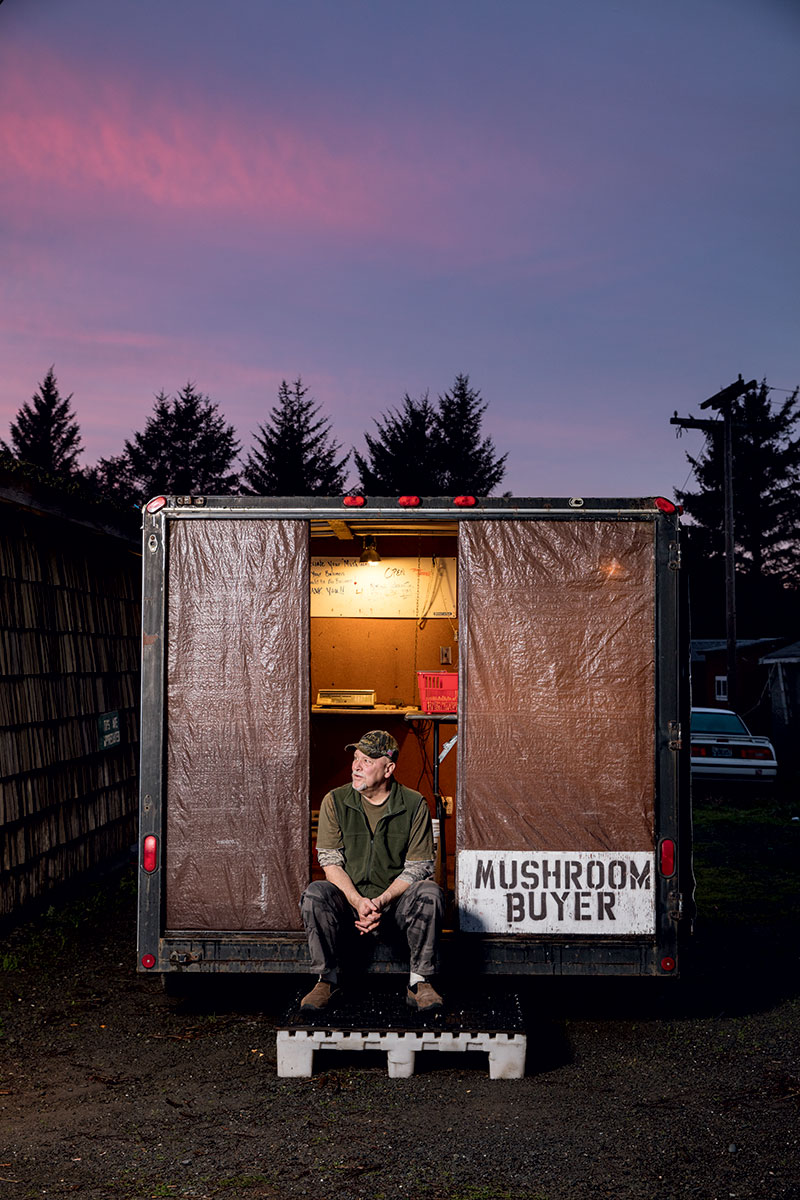 Schramm refuses to abandon his temporary scuba-shop headquarters until after the sun has set. 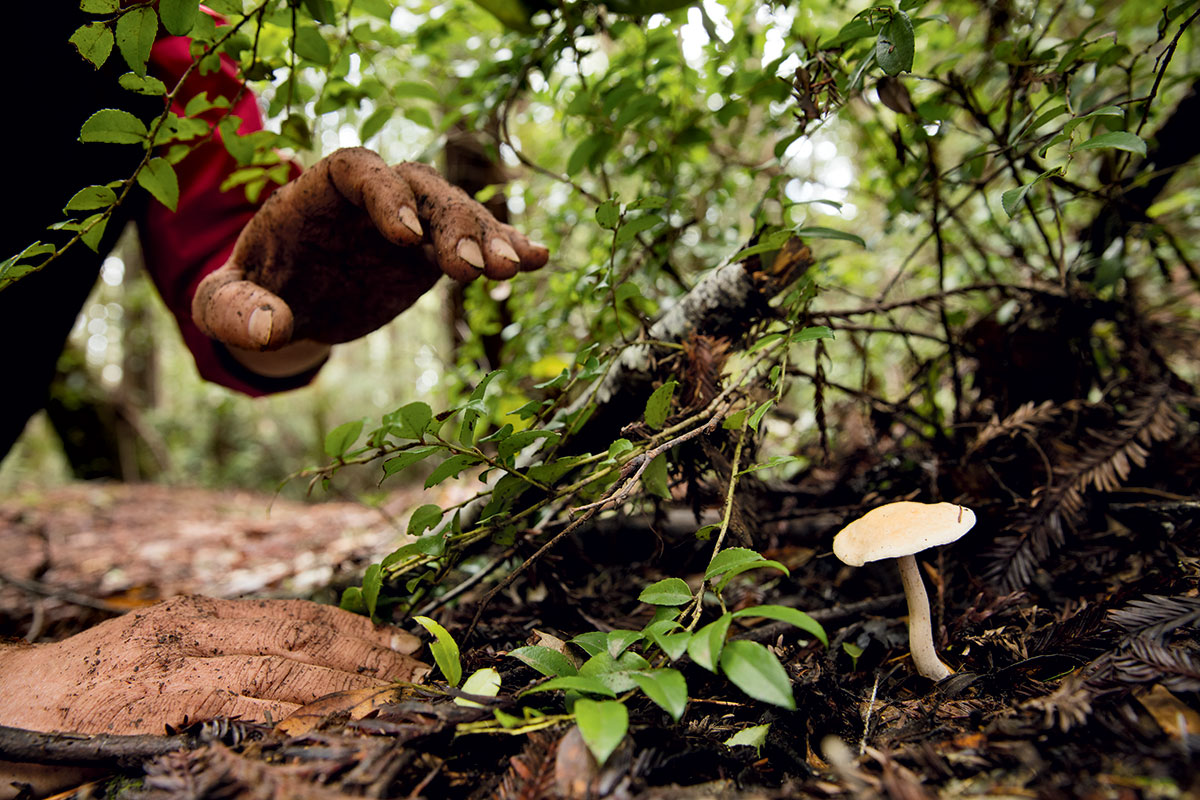 Some mushroom pickers carry guns for protection from bears and mountain lions. Problem is, backwoods marijuana farmers pack heat, too, primarily to protect their crops. According to Green, these pot growers used to slash the tires of mushroom pickers, but an unspoken compromise has emerged, based on differing harvest seasons: From roughly November until the end of March, pickers rule the forest; otherwise, pot presides. “There’s still an overlap in early spring,” she adds. “The pot people are like, ‘You’ve had it all winter, now you don’t get to come in here anymore.’ A curtain drops.”

According to Eric Schramm, the high value of the product, coupled with remarkably scan regulatory oversight, creates a cutthroat business environment.

Beyond gunfire, what else might one encounter in the woods? Old cars, a whole lot of beer cans, a few antlers, some scat, and other signs of animal and human wildlife. Schramm once came across a prosthetic leg. Olivier Matthon (the sole forager who said I could use his real name) remembers an outing a few years back: “A friend and I were checking one last spot, because you always find the best patches at the end of the day.” They did unearth an impressive bed of matsutake – amid human remains. The pair called the sheriff and waited in the dark. “We were close to the road, in a well-known spot. Hundreds of pickers must have seen the body,” says Matthon, blaming the unreported corpse on widespread mistrust of law enforcement. “The Forest Service people don’t like the mushroom pickers.”

Quebec-born, French-speaking Matthon doesn’t fit any ethnic profile associated with the wild mushroom industry. After stints working on organic farms and fishing boats for paltry wages, he found himself lured by the prospect of being his own boss, not to mention stories of mushroom hunters making hundreds of dollars a day. During one of his first forays into the forest, the 39-year-old met a refugee from Laos who – despite the notoriously insular reputation of Southeast Asian pickers – struck up a conversation and invited the Canadian to camp with his family. Matthon still counts these Laotians as his mentors and picking partners. 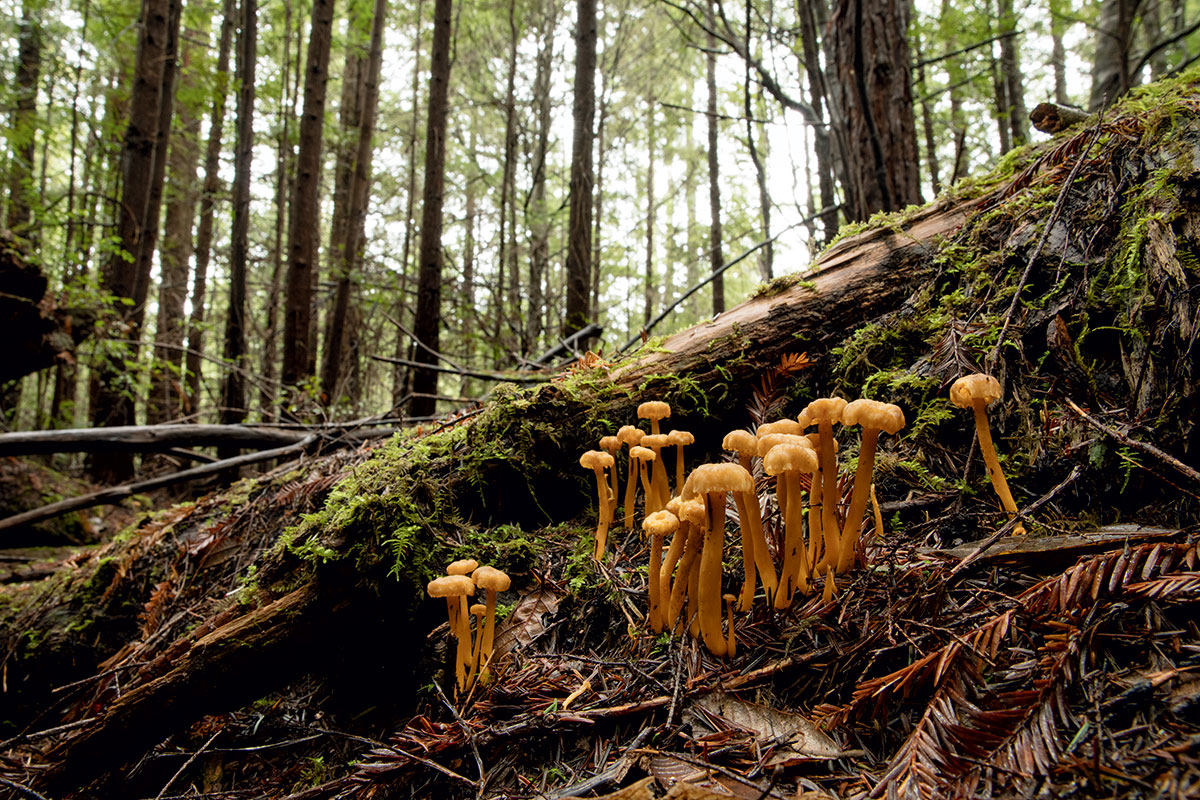 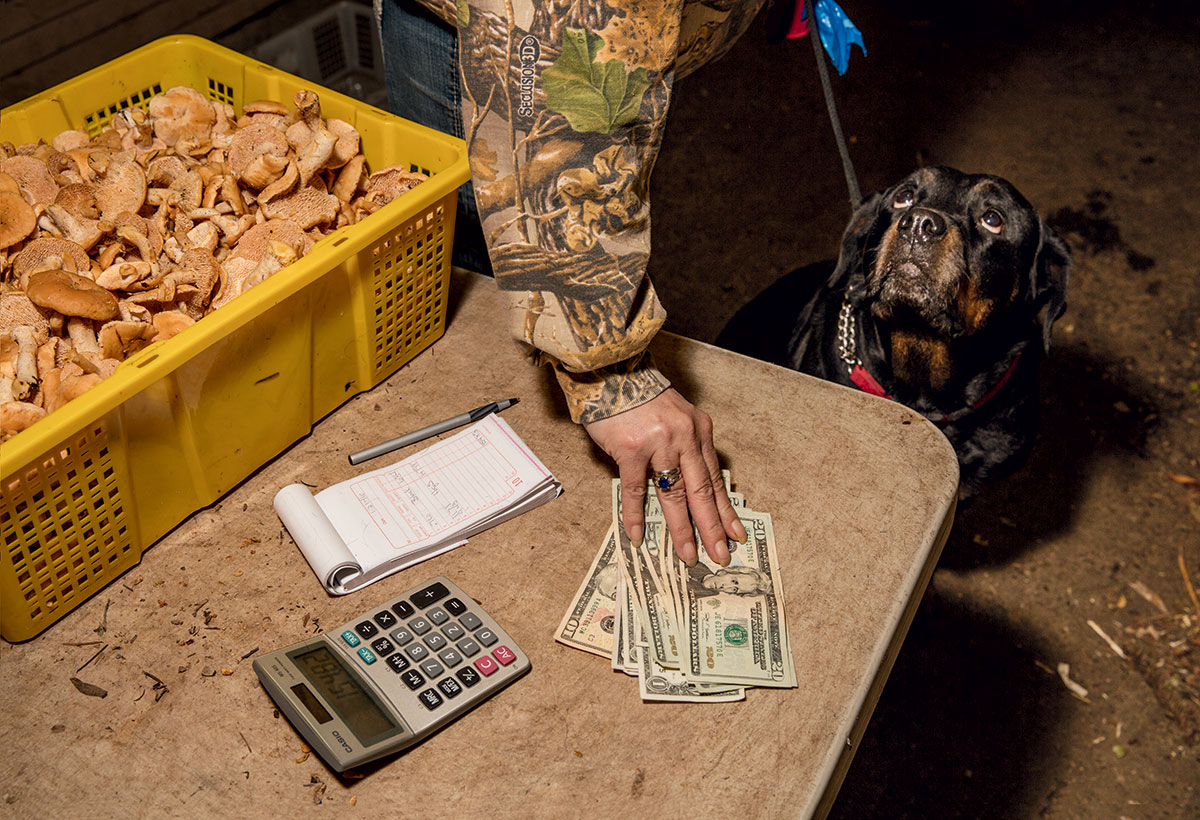 The wild mushroom trade is a low-tech, cash-based, dog-eat-dog business.

That’s the thing about the West Coast’s wild mushroom scene. The moment you think you’ve figured out how to dodge conflict, some strange soul shocks you with a warm welcome. And suddenly, you’re in. Back at the motor lodge in Willits, as buying and selling devolves into beer drinking and banter, Connie Green’s ragtag gang of rebels often resembles an old-fashioned family reunion. Everybody has a tale to tell – about the day they scored $1,000 in matsutake or the night they passed out among the trees, shivering under a tarp, too stoned to find the car.

When I joined Green last winter, she had just received her third Good Food Award at a San Francisco gala hosted by Carlo Petrini, founder of the Slow Food movement. Why, I asked, after all the culinary acclaim, does she still go out into the woods? “Mushroom hunters are the most optimistic people on earth,” Green replies. “We believe there’s rain around every corner.”