Look, Ma, No Hands! The AgBot Challenge Showcases the Autonomous Future of Agriculture

Welcome to a world of seeding remotely - if these inventions make it to market. 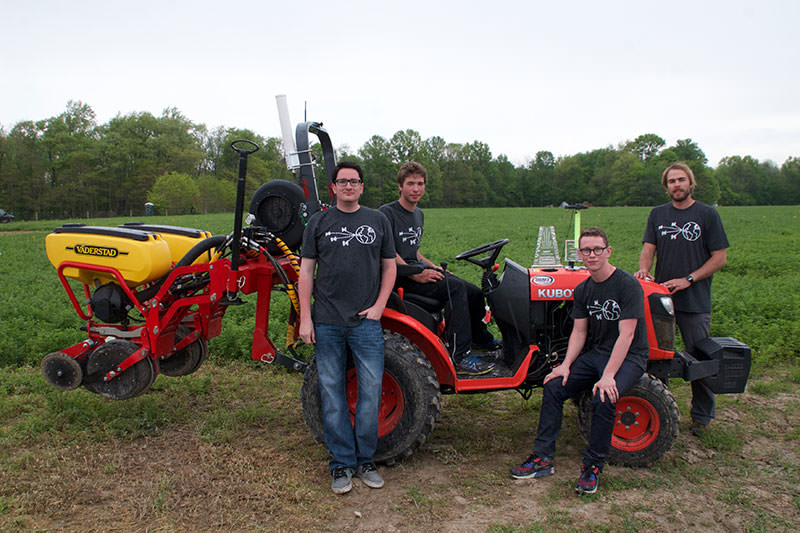 The University of Regina team poses with their winning robot at the 2016 AgBot challenge.
Share
Tweet
Pin
Email
318 Shares

The farming robots we’ll see in the not-too-distant future may look quite a bit like the equipment we already see in the fields – but tricked out with smart, Internet-connected augmentations that allow the machines to operate completely on their own.

That’s our takeaway, at least, from the inaugural AgBot Challenge at Gerrish Farms last weekend, as hundreds of interested people – students, engineers, industry partners, and robotics enthusiasts – descended upon Rockville, Indiana, to watch teams demonstrate their homemade inventions. The specific challenge, which they all chose to accept: develop an unmanned seeding robot that could autonomously plant two seed types in half-mile-long rows, all while being constantly tracked from a remote computer.

This was the first event in a planned three-year series, each one targeting a different farm management need that the student teams and entrepreneurs have to solve. There’s money in it, with cash prizes awarded to the top three teams, but also potential opportunity: with sponsors like Yamaha, AGCO, John Deere, and others in attendance, it’s clear that industry leaders have an eye on what’s coming and could tap into some of that young talent.

Speaker Mark Young, chief technology officer of The Climate Corporation, kicked off the event by drawing parallels between the 1960s space race and the current push to bring reliable data and robotics into farming. He suspects that data science will be the norm in agriculture within five years, and believes that young people “have no bias” against it, because, “They’ve never been told that it’s not possible.”

He left some parting words for the competitors, too: “If everything goes right for you today, you probably didn’t try hard enough.”

Everyone must have tried plenty hard, because nearly all the teams encountered setbacks large and small. It’s important to note that these are small groups working with limited resources – but boundless talent, it seems – in a segment of the robotics industry that’s still very new. That teams produced functional prototypes at all seemed an impressive feat.

Ultimately, of the 10 teams entered, just five had robots appear – and only two of those were fully functional and able to complete the task in the fields.

A couple of teams suffered mishaps in the hours leading up to the event. Indiana University – Purdue University Indianapolis had the smallest robot at the Challenge – no larger than a toddler’s tricycle – and it was envisioned as part of a team of robots that could patrol a farmer’s fields and relay data. However, the controller blew the night before, leaving them with no way to guide its movements. 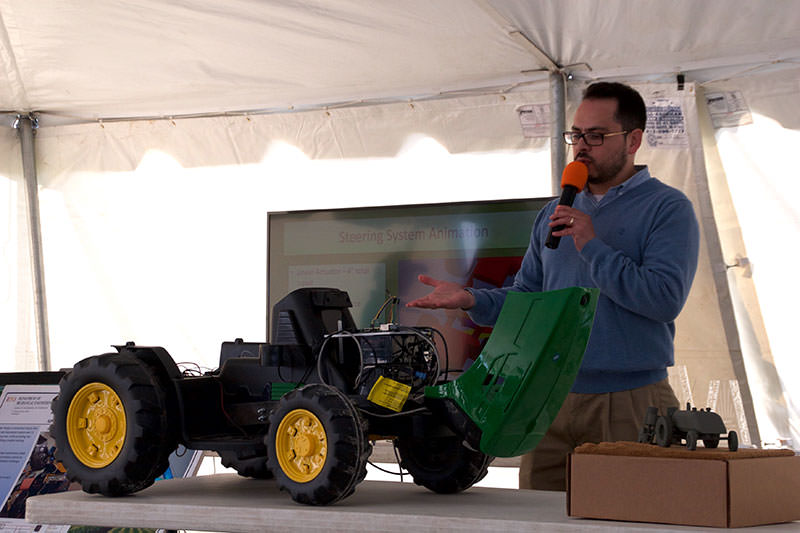 The Indiana University-Purdue University Indianapolis team envisioned a squad of these smaller robots seeding the land, but the controller broke before the event.

Another non-functional prototype came from engineer Nathan Muchowski, who came down from Muchowski Farms up in Odessa, Saskatchewan, Canada. His robot, an automated hybrid electric cart, was self-built and programmed within the last few months – but the design, which put the wheels inside of the frame, helped lead to a broken axle the night before the event. Still, Muchowski’s concept resonated with judges and tied for third place with another team, Pee Dee Precision from South Carolina, and will share the $20,000 prize. 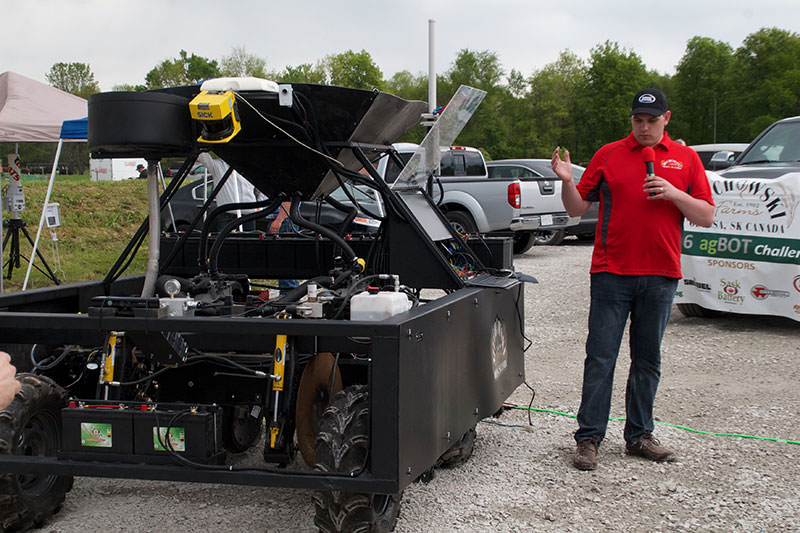 Muchowski Farms’ agbot had a lot of eager onlookers, but a broken axle prevented it from attempting the challenge. 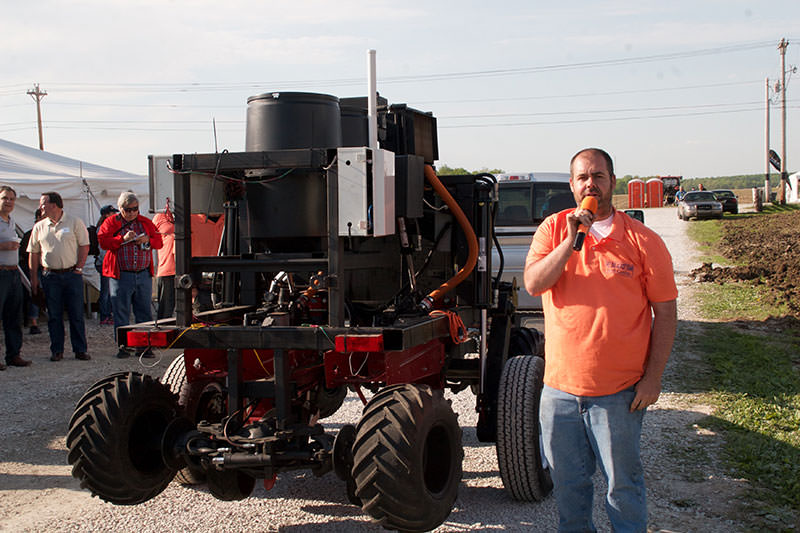 Luckily, the two teams with working agbots impressed both judges and attendees alike. Purdue University’s team won the second-place $30,000 prize with the largest solution on hand: a loader modified and augmented with connected technology. Loads of cables and even a common home router were visible from the open cab door, and when set out into the fields, the loader completed the job and provided remote camera views to the operator via computer. 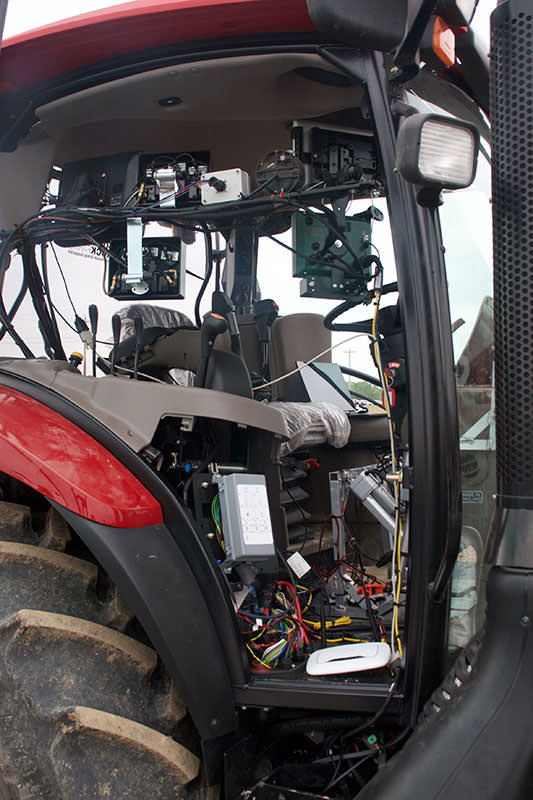 Inside Purdue’s agbot cab: lots and lots of wires – and a router, too. 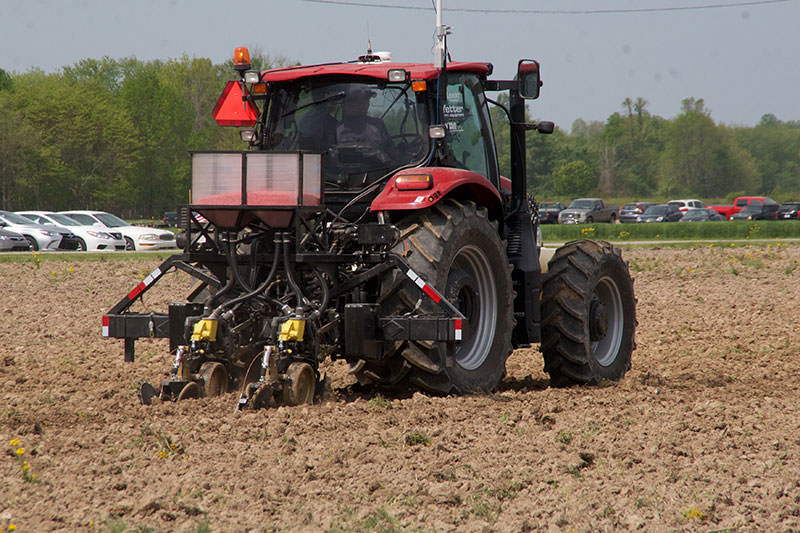 Purdue’s converted loader had one caveat: Despite being autonomous, the school required they have passengers for liability reasons.

The project was a collaboration between Purdue Agriculture and students from South Newton high school in Kentland, Indiana, and the team suggested that its setup would allow farmers to be “proactive instead of reactive on a daily basis.” Benefits would include increased productivity and 24/7 farming capabilities with only one operator overseeing multiple robots from afar, as well as seed and inventory tracking capabilities.

Any three-point loader attachment could work with Purdue’s machine, and the team planned to expand the number of rows it could simultaneously plant following the event.

Ultimately, the winning invention came all the way from the University of Regina in Saskatchewan, Canada, as a trio of industrial systems engineering students – with help from an alumnus – turned their capstone project into an AgBot Challenge victory. Like other teams, the Regina squad had some issues to contend with: After their robot made its way into the field, the communication link between it and the laptop failed, and movement stopped for a couple minutes as bystanders anxiously awaited. 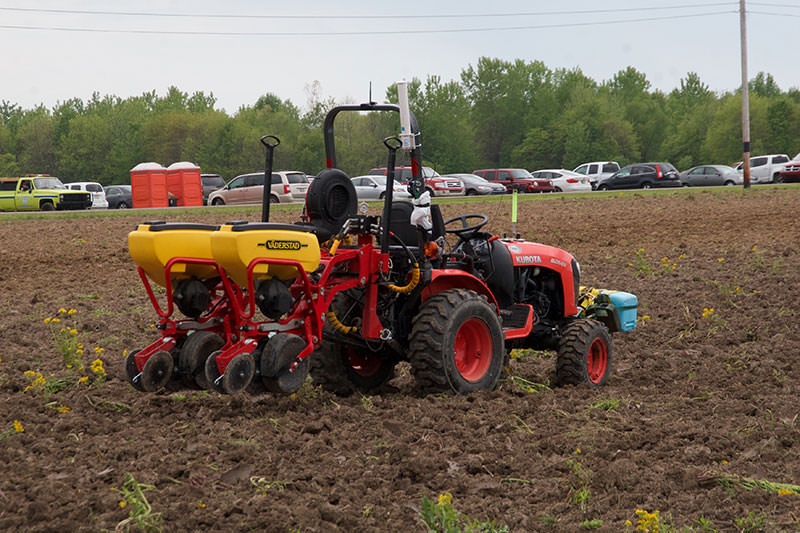 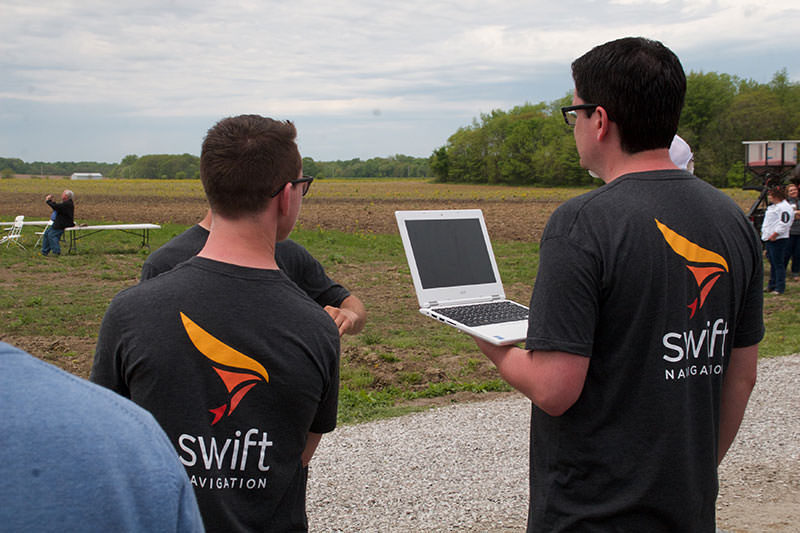 University of Regina team members are seen viewing the live feedback while their drone seeds the nearby field.

It was only a temporary hurdle, however, and the modified tractor completed several rows of seed planting in the field without human control or even a person onboard. What really seemed to impress attendees was the accuracy of its movements and the polished remote user interface, which used GPS coordinates and map overlays to show the robot’s movements. The path it followed was nearly perfectly matched up with the projection.

The team – comprised of students Sam Dietrich with Caleb and Joshua Friedrick, along with civil engineering technologist Dean Kentai – was praised for its round-the-clock work ethic in the days leading up to the event. In fact, the members couldn’t be found at the start of the awards ceremony, as they were off tinkering with the robot again. That hard work and the long nights paid off as the team won $50,000 with the top prize.

It might be years before more polished, professional autonomous robots are roaming America’s fields, but the event aims to, ahem, plant the seeds in the young, creative minds that could ultimately drive that revolution.

Next year, the AgBot Challenge will turn its attention towards weed and pest identification and removal; challenge specifications will be released on May 23. And in 2018, the Challenge will focus on autonomous harvesting. All told, the three-year plan hopes to produce a wide array of concepts to help realize future of agriculture robotics.

Given the enthusiasm around this year’s showdown, the organizers have decided to extend the seeding phase of the competition into 2017, as well. That will allow teams to learn from this year’s successes and missteps alike, and further develop the technology for another 12 months – and the overseers expect that interest will skyrocket after this first stage, bringing even more teams and industry observers into the fray.

“I do see this growing quite rapidly,” admits Rachel Gerrish, director of operations at AirBridge, which provided the mobile tracking antennas. “I hope and also see a lot of people in the ag industry starting to embrace robotics.”