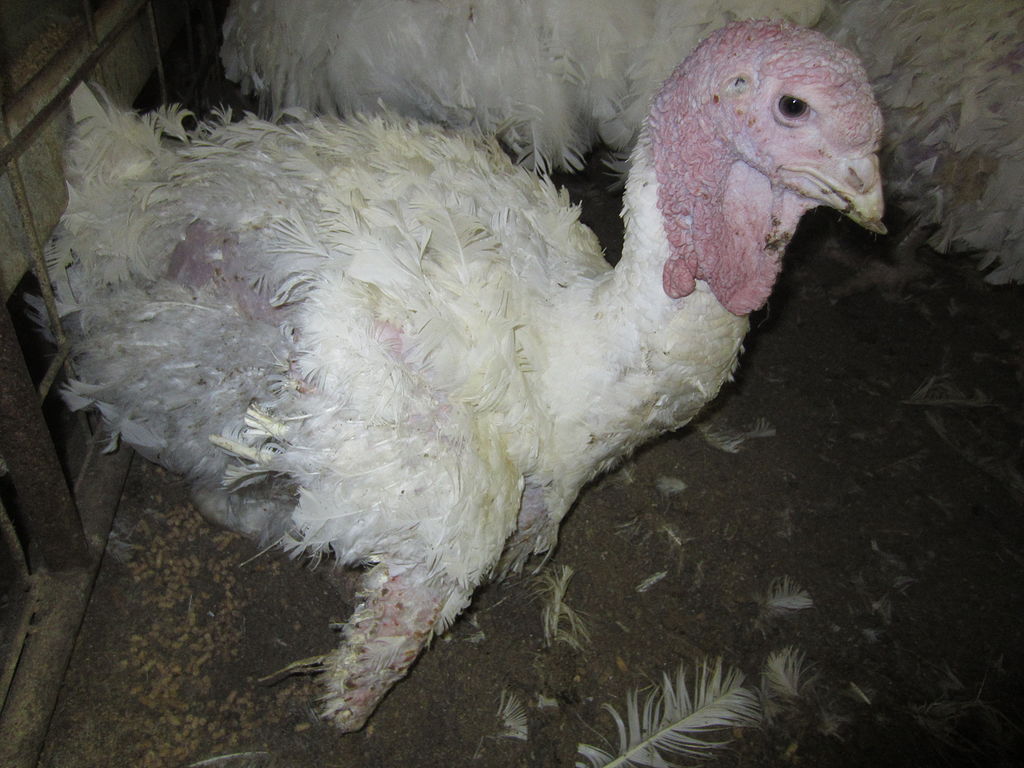 A photograph taken during an undercover investigation of a turkey farm in North Carolina by the animal advocacy organization Mercy for Animals.
Photography Mercy for Animals via Wikipedia Commons
Share
Tweet
Pin
Email
594 Shares

“Awareness of ag-gag laws erodes trust in farmers and increases support for animal welfare regulations,” published in the latest edition of the journal Food Policy, found that there was a measurable reduction in trust in farmers by respondents in a nationally diverse sample of 716 U.S. adults who learned about ag-gag legislation. The drop in trust – dropping from “slightly trusting” to “slightly distrusting” farmers – was just as pronounced among the most initially trusting demographic categories (rural, conservative, omnivores) as it was among those least trusting (urban, liberal, vegetarians).

Ag-gag laws first sprang up in several U.S. Great Plains states in the early 1990s and then spread across the country beginning in 2011. Legislators who have penned the laws say it’s about protecting privacy rights for an important industry. Opponents say the laws criminalize investigative journalism resulting in jail time for whistleblowers who expose unsafe or inhumane farming practices. Currently, eight states – Montana, Wyoming, Utah, Kansas, Iowa, Missouri, North Dakota, and North Carolina – have ag-gag laws on the books.

A number of organizations – including those involved in animal protection, consumer rights, food safety, and whistleblower protection like the Humane Society and the Center for Food Safety – have sued several states in regard to these laws, which tend to criminalize actions like getting hired at an animal facility under false pretenses and recording inside animal facilities without permission. The laws typically force people to turn over to law enforcement any footage of alleged animal abuse within 24 to 48 hours or face prosecution. This new study from the University of British Columbia, led by PhD candidate Jesse Robbins, shows that these laws actually have the opposite effect of what legislators and industry representatives intend.

“You may think you’re stopping your antagonist but you’re really doing precisely what [the activists] want, which is that the [farming sector] is being perceived very poorly,” says Robbins. “People who had read about the ag-gag laws were much more likely to believe that we need more laws and greater laws governing how farm animals are raised. That should be an eye-opener to farmers and their representatives.”

Robbins is in the Animal Welfare Program at UBC. The group is not made up of animal activists; they are scientists who, among other things, study ways to provide better care for farm animals, which can help farmers’ bottom lines. Robbins, who grew up on a small farm in Iowa, worked for a trade association for the dairy industry in Washington state before entering the PhD program where he applies social-science and psychological methodology to controversial questions in agriculture.

He tells Modern Farmer in a phone interview that the agricultural industry is “fairly divided” on whether ag-gag laws are a good thing. He points to a 2012 poll in the prominent cattle industry publication BEEF Magazine that found 60 percent of the 500 readers surveyed did not think ag-gag laws were a good idea for the livestock industry to pursue.

Robbins and his team were surprised by the results and jokingly wanted to title the paper “How to turn a rural Republican meat eater into an urban Democrat vegetarian.”

The more than 700 people in the new UBC study represented a broad cross-section of Americans based on education, income, age, political affiliation, living environments, and gender. It used a seven-point scale, with seven being complete trust and one being complete distrust. Two-thirds of the respondents, after reading about ag-gag laws, reported a slight distrust of farmers. The respondents were also more likely to support tougher animal welfare legislation after being exposed to the information about ag-gag laws.

Also unexpected: Respondents who learned about ag-gag legislation and then received a questionnaire on other agricultural issues such as food safety, workers rights, GMOs, and environmental problems, had more negative perceptions of how well farmers are taking care of the environment. “It suggests that the reduction in trust wasn’t specific only to animal issues,” says Robbins. “The ag-gag laws can also lead to a more general distrust of farmers.”

He explains that because this is an experimental study, the researchers are not suggesting that participants’ responses are representative of the American population in general, although the sample size does fall within the range of representative samples used in other polls that had similar results to Robbins’ study.

Robbins says he often wonders that if there are a lot of farmers who don’t support ag-gag laws why legislators and agricultural trade groups continue to push for them.

“I think that discrepancy is worth pointing out. I understand why the Humane Society doesn’t like these laws, and they still go forward, but it’s kind of weird when a lot of farmers are saying they don’t like them and then a month later their trade groups are pushing for them,” he says.