Why Do French and Italian Tomatoes Taste So Damn Good?

The main reason I love to travel to France and Italy is for food, specifically the tomatoes you find in these countries.

The combination of tomatoes and olive oil is my favorite breakfast—just sliced tomato on toast with a pinch of salt and a drizzle of extra virgin olive oil. It’s what I ate every single morning on a recent two-week trip to France and Italy.

I would do the same more often at home in North America, but it’s not the same experience. Tomatoes here just don’t have nearly the same flavor as their European counterparts. Ask anyone that has tried European tomatoes and you will find a very consistent response: They are heaven. And once you have tasted European tomatoes, it’s hard to go back.

Many years ago, I tried to recreate the flavor of Italian vegetables by buying Italian seeds and planting them at my farm near Vancouver. Most of the vegetables tasted superior to local varieties and were a hit at our local farmers market. But much to my disappointment, the tomatoes, although good, still didn’t stack up when compared in flavor to what I remembered tasting in Italy.

I thought it might come down to different soil, water and sun. I was briefly tempted to ship containers of Tuscan soil to Vancouver but was reminded that it would be somewhat illegal. But as I researched further, I learned that perhaps the larger issue simply was preference. Europeans insist on taste first and foremost, whereas North American growers have succumbed to market pressure for bigger, perfectly shaped fruit. Harry Klee, a horticulture professor at the University of Florida, told Julia Belluz, of Vox, that industrial tomatoes “have been bred for yield, production, disease resistance. The growers are not paid for flavor — they are paid for yield. So the breeders have given them this stuff that produces a lot of fruit but that doesn’t have any flavor.”

On my recent trip, I met a French chef named Benjamin, who confirmed Klee’s conclusion. He took me shopping at a local farmers market, where I saw the difference. The tomatoes had erratic shapes and many had small black blemishes—imperfections I easily forgave the moment I tasted them.

In North America, we want tomatoes all year, and not just during local growing seasons. As such, tomatoes are grown far away and shipped before they fully ripen. They lack the sugar and water content of fully ripened tomatoes. Additionally, our consumers have been conditioned to demand aesthetic perfection, perfectly shaped fruit and vegetables, without blemishes, and without considering flavor. 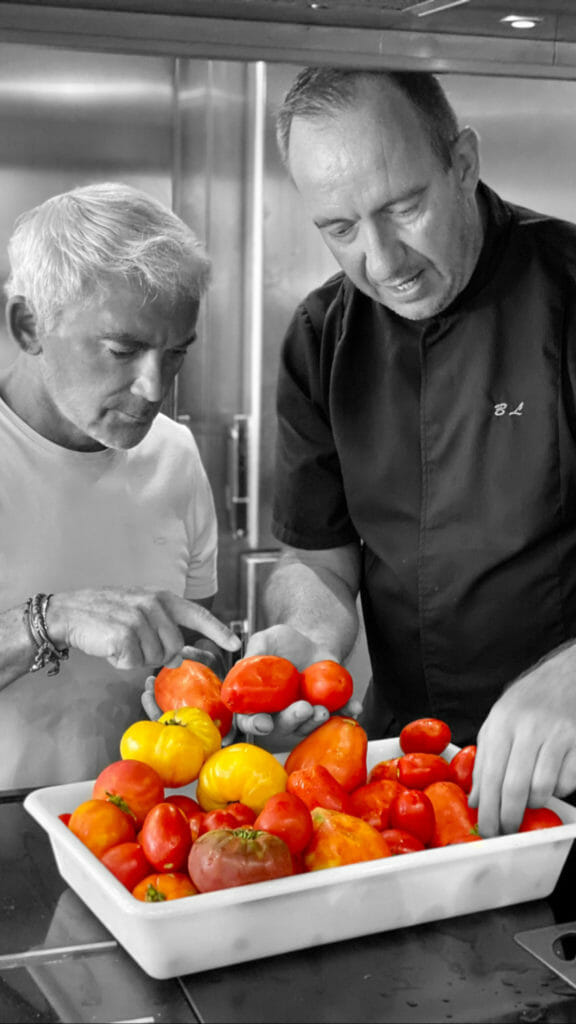 I asked Benjamin how he chose tomatoes when shopping. He starts by looking at their shape. He then feels them. They should not be firm, but a bit soft instead. He needs to feel the pulp which indicates water and sugar content. He then does something I never think to do: He smells the fruit. I remember my father doing the same thing when I was a boy. I asked Benjamin what he was looking for in the smell and he said he could judge the acidity and sweetness. And then of course, there’s the taste.

As Benjamin and I talked, we tasted his selection of tomatoes. His personal favorite tomatoes for eating raw are beefsteak tomatoes, and Roma tomatoes for making sauce. For the smaller varieties, he preferred the Pigeon tomato over the cherry tomato.

Sadly, I eventually ran out of questions and he ran out of tomatoes. I am home now enduring a two-week quarantine. Was it worth it? Si, Certo! Oui certainement!

You still haven’t answered why the same variety of tomatoes you brought back from Italy, albeit better, still didn’t taste as good as they were in Italy.
Was it the different climate? This would be my first guess.
Tomatoes require a lot of sun, like us that with sun produce lot of vitamins D under our skin and no amount of pills is going to replace sun…

Consider the average amount of sun, average temperatures, and latitude. I think you have your answer. I grow my tomatoes in the southern French Alps. What we lack in daily average temperatures, we make up lots of high altitude sun. My tomatoes are ugly buggers, but oh so much better than even French market tomatoes! Due to covid, I planted American heirlooms seeds that were ten years old and had been sitting in my seed box. In my opinion, it’s more a question of sunlight than type of tomato or soil.

Vancouver has a relatively cool climate. In my experience with growing tomatoes for 40 years, the warmer the climate the tastier the tomato.

Italian tomatoes have no flavor

Why Do French and Italian Tomatoes Taste So Damn Good?
The Art of Urban Permaculture
The Flavor Bible Gains a New Disciple
A New Approach to Reforestation in Haiti


Explore Modern Farmer
Related
Personal Essay, Plants
I Failed at Growing Food for Humans, So I Grew It for...Lela Nargi
Plants
Why We Need to Adopt More Orphan CropsShea Swenson
Animals, Food & Drink
Can Finding New Culinary Markets for Green Crabs Help Curb the Invasive...Tim Briggs
Food & Drink, Plants
How to Transform Green Walnuts Into a Nutty LiqueurDanny Childs
wpDiscuz
We use cookies on our website to give you the most relevant experience by remembering your preferences and repeat visits. By clicking “Accept”, you consent to the use of ALL the cookies.
Cookie settings ACCEPT
Privacy & Cookies Policy