A new report on the global use of antibiotics and the rise of antibacterial-resistant bacteria is out today and the news isn't good. 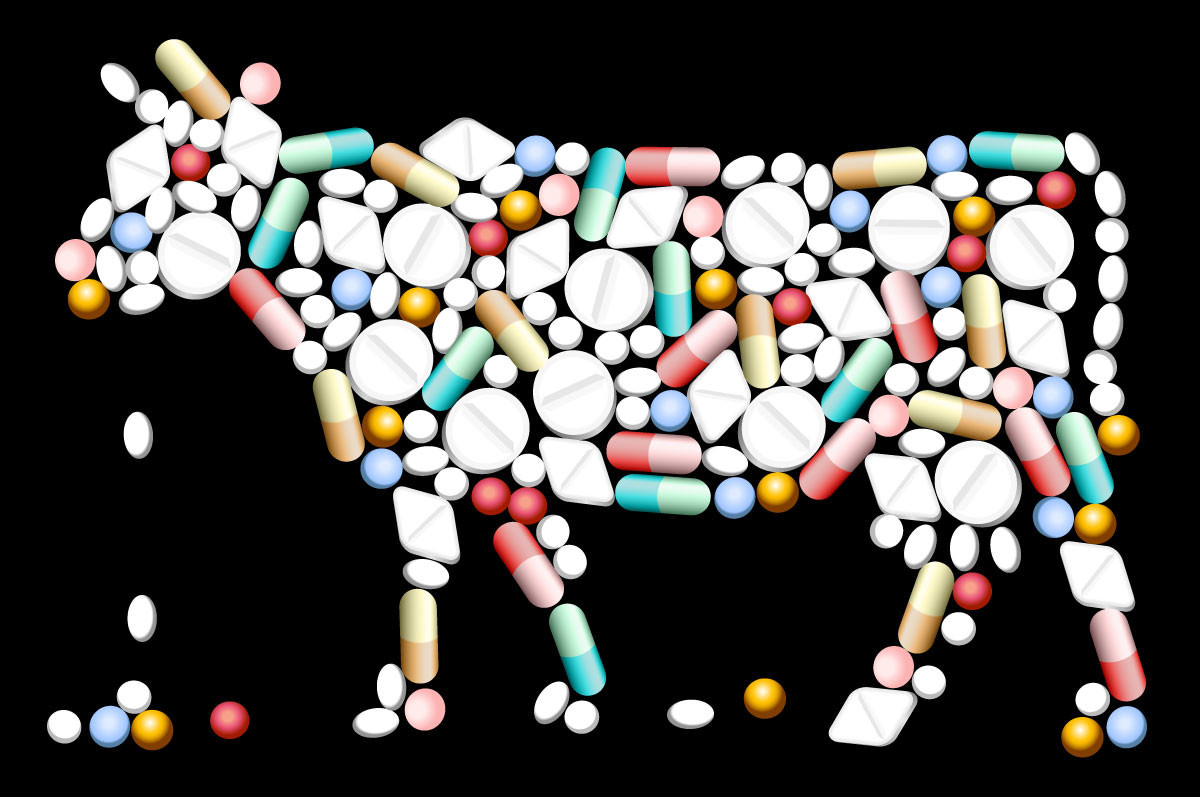 “Evidence from around the world indicates an overall decline in the total stock of antibiotic effectiveness: resistance to all first-line and last-resort antibiotics is rising,” finds a new report out today from the Center for Disease Dynamics, Economics & Policy (CDDEP), a Washington, DC, and New Delhi-based think tank. The report, “The State of the World’s Antibiotics, 2015,” takes a look at the current state of antibiotic use and antibiotic resistance rates in humans and livestock around the globe. It’s a pretty serious problem, and the agricultural use of antibiotics plays a large part.

“The biggest surprise was the quantity of use of antibiotics in the animal sector – about 64,000 tons, which is expected to go to about 105,000 tons by 2030. That’s a pretty serious number,” says Ramanan Laxminarayan, CDDEP’s director and one of the authors of the report. 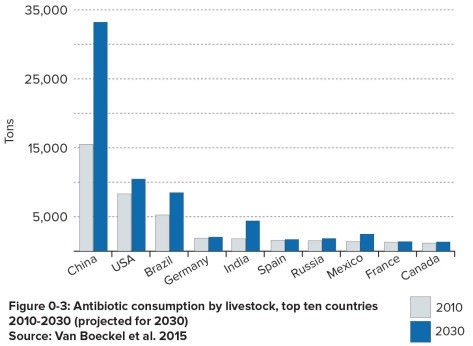 “Make no mistake, the animal consumption [of antibiotics] is growing at a faster rate than the human consumption,” says Laxminarayan. “There’s a huge increase in the demand for animal protein globally, and that means more farms are moving towards a more intensive form of agriculture. About two-thirds of the projected increase in the use of antibiotics is driven by the increased demand for animal protein, with one-third due to the change in practices to meet that demand.”

Laxminarayan says much of the antibiotics given to livestock is being used for growth promotion rather than medically. He says it’s “kind of insidious” since in some cases antibiotics are “premixed into the feed so farmers may not even be aware of the fact they’re feeding antibiotics to their animals.”

The report states that cattle, poultry, and pigs raised on antibiotics harbor “significant populations of antibiotic-resistant bacteria, which are transmitted to humans through direct contact with the animals and through their meat, eggs, and milk.” Additionally, a proportion of the antibiotics used in both agriculture and aquaculture end up in the environment adding to the “total global burden of antibiotic resistance in both animals and humans.”

“About two-thirds of the projected increase in the use of antibiotics is driven by the increased demand for animal protein, with one-third due to the change in practices to meet that demand.”

One piece of good news from the report is the decrease in cases of Methicillin-resistant Staphylococcus aureus (MRSA) in Europe, the U.S., and Canada over the past eight years, to 18 percent, 44 percent, and 16 percent, respectively, as well as in South Africa. But MRSA is on the rise in other parts of the world, including India, Australia, and Latin America.

“Things don’t have to get worse. They can actually get better if we pay attention to what’s going on,” says Laxminarayan. “Antibiotic resistance doesn’t have to be an evergreen problem. It can be dealt with and needs to be dealt with.”

The report came together after a nearly three-year effort and was co-released with the Global Antibiotic Resistance Partnership, a CDDEP project funded by the Bill & Melinda Gates Foundation that helps a number of low- and middle-income nations develop strategies to handle the problems of antibiotic resistance. The report’s findings can also be found on the CDDEP’s online ResistanceMap tracking tool, a graphic way for the public to get a look at the problem.

Laxminarayan says just incentivizing new antibiotic development isn’t the answer to our resistance problem because new drugs aren’t likely to be available for quite some time, and when they do become available are likely to be “quite expensive.” He believes the answer lies in better public health – areas like water sanitation and vaccinations when possible; reducing the use of antibiotics in animals and banning their use for growth promotion; continuing to monitor use and resistance; and educating populations about antibiotic resistance.

“I think countries are starting to take it more seriously, but that’s just a beginning. There are many countries just waking up to what the problem is and how to deal with it,” he says. “Antibiotics are a valuable resource. Our lives depend on it and we know so little about it.”

Laxminarayan and the CDDEP hope to change that with this report and others they plan on releasing as updates every two years. He points out that we have global reports on the environment and the climate, so why not a report on “this very valuable resource.”