Swimming Pool Farms: Going Off the Deep End in Arizona

The McClungs doesn't need food shopping, they have their swimming pool. 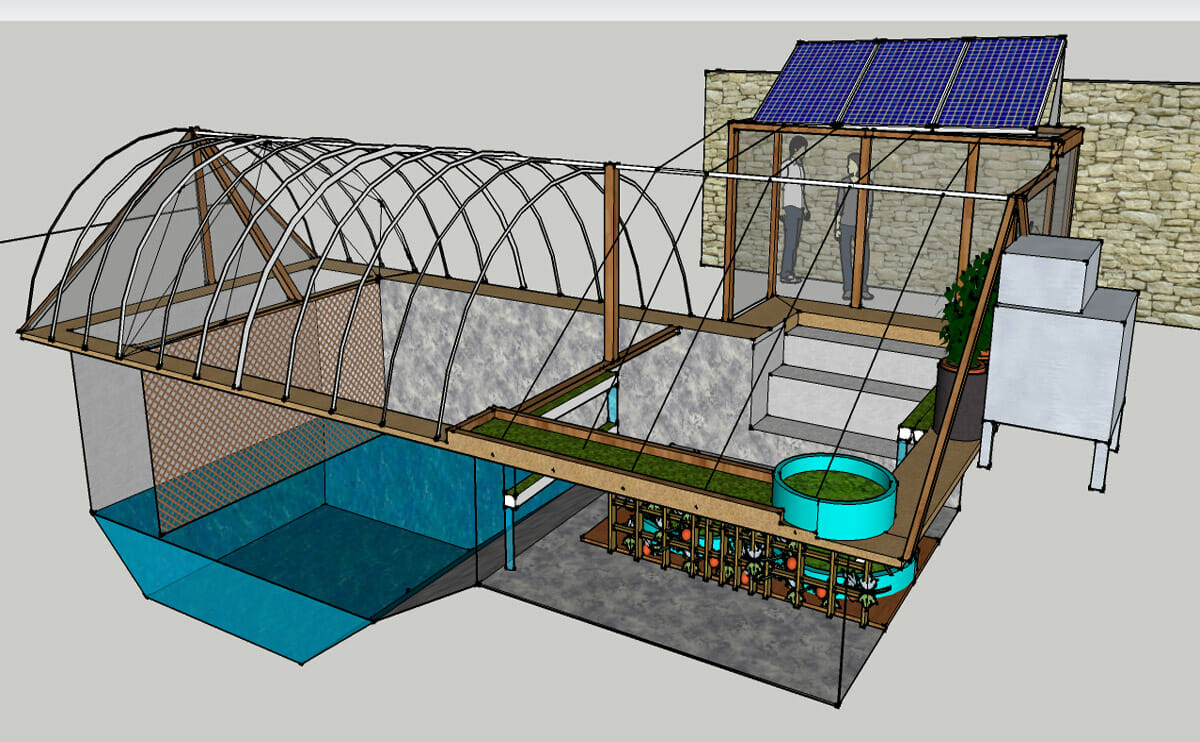 When the McClungs bought the foreclosed home in 2009, the backyard was a suburban wasteland with a cracked, concrete, in-ground pool. “The real estate agent told us we had to do something about the pool, but he didn’t give us a good option,” Dennis says. “So we figured we could turn it in to a greenhouse.”

The McClungs has some farming and building experience – Dennis worked on a dairy farm and at Home Depot, and Danielle grew up on small farm in Ohio – and they’d been trying to become as self-sufficient as possible. But they’d never started their own growing operation. Unintimidated, and with no interest in swimming, Dennis drew up a model and two days after they moved in they started framing up a greenhouse in the pool.

It’s hard enough to grow grass in the desert, much less greens, but the McClungs have made it work, using a tenth of the water traditional agriculture uses. They’ve turned the pool into a closed-loop aquaponic farm that they call Garden Pool. All the parts are linked – it’s almost Rube Goldberg-esque in its connections – to create an ecosystem that’s almost entirely self-sustaining and thrives in Mesa’s harsh climate.

The McClungs get most of their food out of the pool (they’ll take their kids out for pizza occasionally) and they’re trying to share the wealth. They’ve started a non-profit and become authorities on closed-loop farming in arid areas. They’ve built pools in Haiti, as well as in their community, and they’ve turned their house and yard into a permaculture lab.

It starts with a pond – in their case, the deep end of the pool – which is full of tilapia and duckweed. Chickens roost over the pond, dropping excrement for fertilizer and eating the duckweed. Water from the fishpond is pumped into hydroponic beds where they grow everything from wheat to sweet potatoes in low-moisture coconut coir (A growing medium made from the fibers of the coconut husk, which holds water well in dry climates). Then the water is recycled back into the pond.

Solar panels on the roof of the house power the pump and collect rainwater for the pond. “There are outside inputs; people will say, ‘you’re getting solar energy from the sun, Dennis!’ but it’s pretty much closed loop,” Dennis says.

It’s taken them a while to dial in the system. They started with container gardens in the pool, which scorched almost immediately in the Arizona heat. From there, they experimented with different kind of hydroponic setups and soil mixtures. At one point, they were keeping things cool with a giant swamp cooler. “We spent a lot of time falling on our faces,” Dennis says. “We’d put one fire out with another.” Through trial and error they’ve found that chicken excrement creates an ideal algae bloom for fish food, and that duckweed oxygenates the pond and keeps the chickens fed. They’ve learned that sweet potatoes grow well without soil, but that they have to plant fruit trees outside of the pool.

They’ve turned their pool from a suburban water-suck into a densely fertile mini-farm. It’s easily replicable and is ideal in arid places such as Arizona because it uses such a small amount of water.

People in the neighborhood were curious and began coming by to check out the pool. To spread the word, the McClungs started a MeetUp group. It now has more than a thousand members. They’ve developed a big volunteer network to help build new Garden Pools. Dennis says that about a third of them are installed in actual pools, and that they dig ponds for the rest. With a volunteer team they can build one in about a day.

McClung is a perpetual tinkerer, and the Garden Pool has become something of a science experiment. He’s testing soil in the front yard and growing fruit on the roof. In addition to the circular aquaponic system, which he’s continually tweaking, he has designed a UV water sterilizer that’s housed in a five-gallon bucket.

Farming in Mesa’s arid climate has taught them lessons that transfer to other hot, dry climates. Their next move is to take what they’ve learned in the suburbs and bring it to other deserts, food and otherwise. Dennis says the most interesting part now is figuring out ways their system can be used in low-resource areas where farming is the backbone of the economy. He’s going to Ghana next year and trying to figure out the best way to build farms there. “I’m basically turning my front yard into West Africa,” he says.

Dennis wants to turn their house and their farm into a research center focused on how they can help build farms in other desert regions and develop local food systems. He says that if they can make it work there, in suburban Arizona, anyone can grow their own food. “In the States it’s cool, it’s kind of like a novelty, but in the Third World I think it can really make a difference,” he says.

Go to gardenpool.org and you will find them there.

I would like to reach the McClungs to see about plans for my old pool in NY?

[…] tremendous use of water; sometimes you can reuse it by creating a closed-loop system in which the plants feed, say, tilapia, which then feed the plants with their waste, but those work best in small-scale environments due […]