Caleb Charland: Back to Light

Caleb Charland has a unique way of lighting up produce for his photoshoots: use the fruit itself. 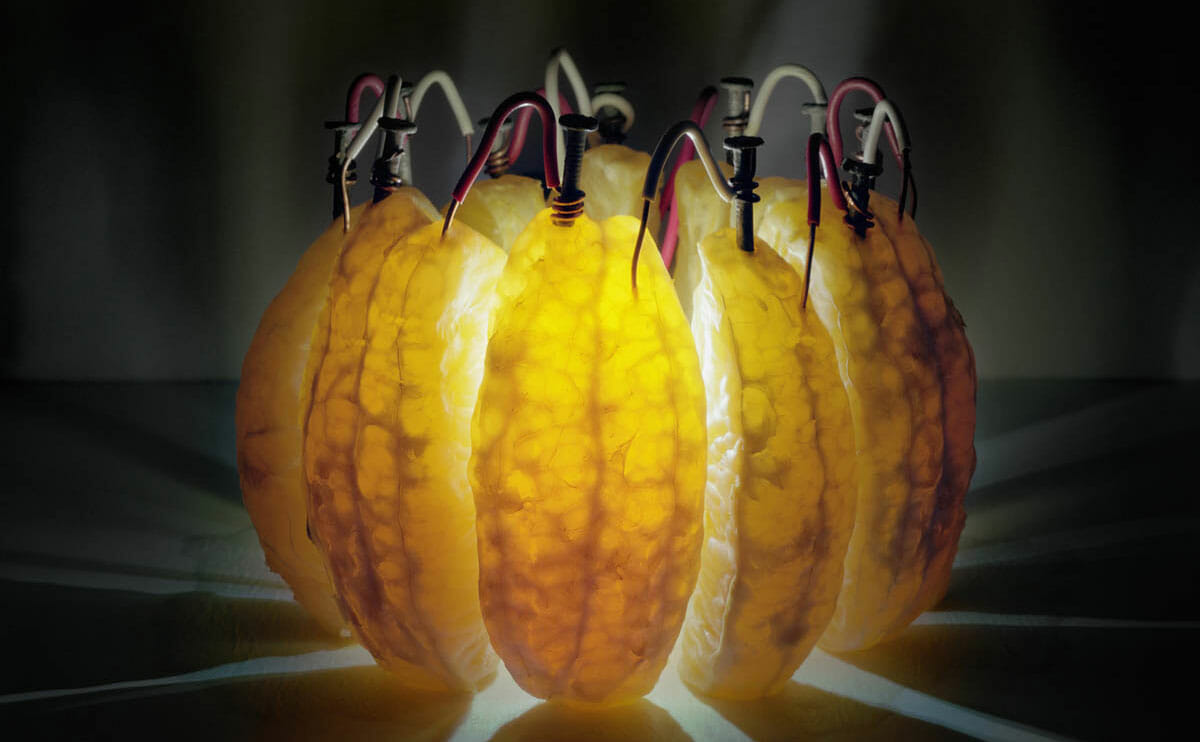 Modern Farmer: What are some of the farms that you’ve used as location?

Caleb Charland: The first commercial farm I worked with was the LaJoie Growers of Van Buren, Maine. They do mostly potato farming but they have a variety of other crops. I’ve done two projects up there and hope to continue my relationship with them in the coming growing season.

MF: Which images from the series were taken there?

CC: The potato field image and one that I haven’t released yet. It was done in a beet field. The wires are coming up out of the beet greens, powering the lamp. I did that this last September. We talked about taking some photos in their potato storage units because they have several buildings that can hold hundreds of tons of potatoes. I like that idea of working in the storage unit and having mountains of potatoes going back in the distance.

MF: How much time does it take to compose an on location shot, as opposed to a studio set up?

CC: There is a lot of preproduction for the outdoor installations. Cutting wires and preparing the lamp, there are usually about 30 LED lights that I wire to the inside of the lampshade. From there each wire comes off and connects with each battery. This process usually takes a day or two. All the batteries are connected to a galvanized nail with a wire wrapped around it. When you have about fifteen or so wired in a series it will generate the four or five volts you need for the LED light.

For the potato shot specifically, it was two or three days of work because I dug up all of the potatoes and wired them and got the voltage right, and then buried them back in the ground because I wanted the wires to be coming out of the ground. Kind of an odd thing that happened: When I buried the potatoes back in the soil, the batteries generated eight or nine volts above ground but in the ground only about four. I don’t know what interaction was happening with the wires but I had to think on my feet there and make the batteries larger than I normally would. When the set up is all done, I send one or two nights shooting it the scene. I’ll have two or three cameras set up and the exposures will be set anywhere from four to eight hours long and I usually camp out there, start the exposure, set an alarm clock and then finish the exposure.

The lines in the sky of the potato image are called star trails. As the earth rotates, the stars move throughout the night sky in relation to your vantage point on earth. If you leave a camera open the stars actually form arcs and trails through the sky. The potato picture was about an eight-hour exposure. The light that comes off the LEDs is fairly dim and when it is coming though a lampshade its even more dim. Just to have that light expose the film and feel like its actually bright on the film takes four to eight hours. I try to shoot right around the full moon because then I get the moon filling in the landscape a bit, working with nature that way.

Sometimes the studio set-ups take just as long. The hard part is trying to arrange all of the subjects in the image. I wanted to make a single battery out of one piece of fruit and the orange seemed like the perfect organic material because it separates itself into wedges naturally. I ended up building an armature that would support the wedges out of small wooden skewers. I slid the oranges wedges onto the skewers and left a little gap because I wanted the light to leak out in between. Then it’s a few hours of trial and error, trying to find the right arrangement, and then again, one or two nights of shooting.

MF: Do your images follow what is in season?

CC: Yeah. For the outdoor ones, it’s working with what is available and what access I have to land. People are protective of their land and I wouldn’t just show up and do it anywhere. There are quite a few orchards around Maine, so apples are pretty accessible. As far as the in-studio shots, its whatever is available at the grocery store. But in our modern system you can pretty much get anything at any time.

MF: Have you noticed that different fruits produce different amounts of energy?

CC: Each individual piece of fruit is going to vary a little bit. I did do one image using a cantaloupe and I remember being surprised how much voltage it gave off for not a lot of cells. I take the assembly piece by piece, so as I’m constructing the image I’m taking voltage readings, and it’s sort of a balance between design and pragmatism.

MF: What exactly is happening with your produce batteries?

CC: The way I understand it is, because the galvanized nail is coated with zinc, when you poke the nail into the electrolyte environment the zinc gives off electrons which then get picked up by the copper wire. The electrolytes in the produce causes the chemical reaction to occur. Once that’s happening, it’s just a matter of connecting enough cells in the series to get your voltage up to the right amount.

MF: Has this been a fascination for a while?

CC: I started this project in 2008, when I was researching a bunch of grade school science experiments, using them to inform my art practice, and as a way to revisit everyday wonder. The produce battery had always come up and I made this picture called “Limelight” where I made a stack of limes power a small light bulb. When I returned back to Maine I started making a few of these images in color. Being around the Maine landscape I really wanted to get outside and take the images to a bigger scale. In 2011 I was able to do the apple tree with LEDs and every subsequent growing season just trying to add to the portfolio.

MF: Do you feel that “revisit everyday wonder” is a theme in your work?

CC: Yeah, I think all of my work stems from a curiosity of how the world works. Because I’m a photographer, that curiosity veers into photographic materials, I’m always exploring the possibilities of light. It’s all about staying curious and wondering how certain events will unfold or manifest as photographic output.