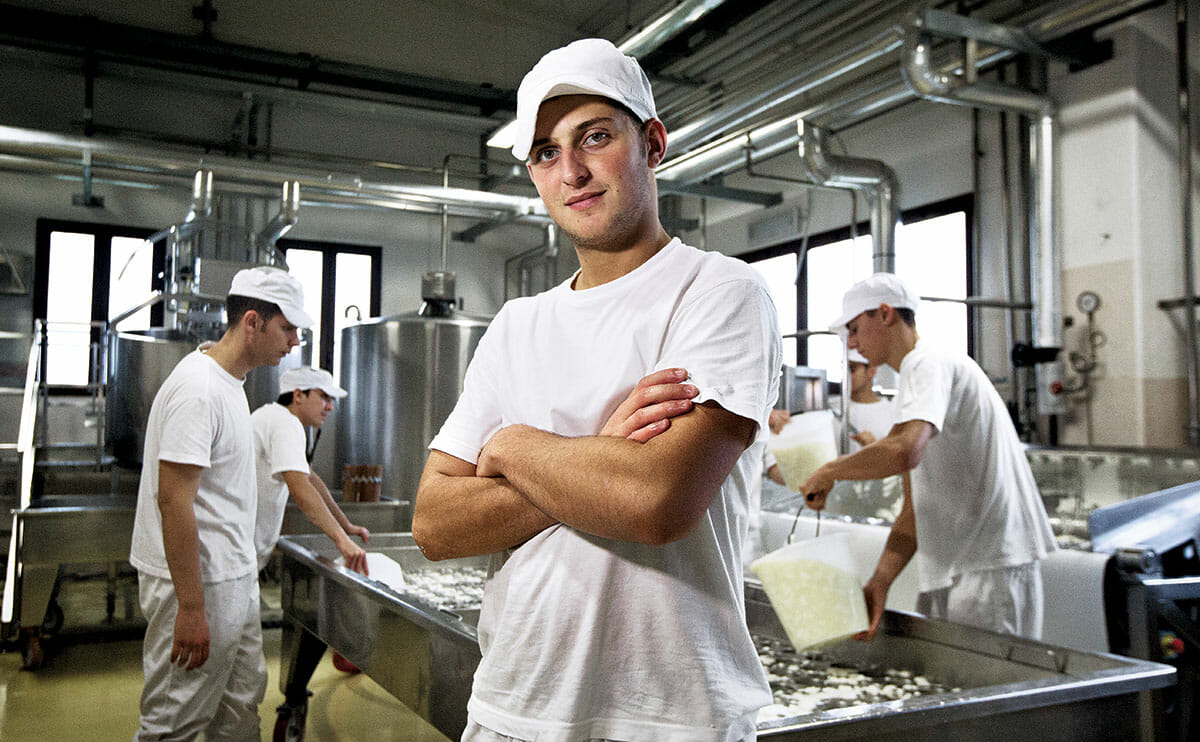 At San Patrignano, a drug treatment center in Rimini, Italy, more than a thousand people – mostly men, the majority in their 20s – gather at long tables in a cavernous dining hall. A sharp clap of hands cuts the buzz of chatter. Suddenly, everyone stands in unison and pauses for a moment of silence. Another clap and all sit back down. Lunch is served.

But this is not just any institutional lunch. The meal includes house-made charcuterie from the Mora Romagnola pigs kept outside and tended to by residents; pasta with a ragout of vegetables plucked from the garden that morning; fresh ricotta made from the milk of the brown Alpine cows likewise housed on campus and crusty loaves of just-baked bread. Even the olive oil is homemade.

In fact, almost all of the food consumed at San Patrignano comes from vegetables or animals farmed by the 1,300 recovering drug addicts living at the center. Every element of the meal is prepared by residents. Those who don’t farm or cook, serve.

Should farming be the future of rehab? The results at San Patrignano are certainly promising: More than 20,000 drug addicts have stayed here since it was founded by businessman and philanthropist Vincenzo Muccioli in 1979. Financed through donations, fundraisers and the sale of various products made at the center – including an award-winning wine. San Patrignano boasts a 70 percent success rate among residents who complete the program.

More Rehab on the Range

Addicts are admitted free of charge, sometimes in lieu of a prison sentence, and stay for a minimum of three years. Residents live together, their days filled with therapeutic programs and vocational activities – involving everything from raising cattle to growing vegetables, training horses to making cheese.

“When residents arrive here, they see so many people – thousands of them – who are working and learning and not using drugs,” says Antonio Boschini, head of the therapeutic program and a former drug user himself. “They understand for the first time that they can live without drugs.”

Rehabilitation programs on farms exist in the United States, too. “Meaningful work is part of the recovery experience,” says Jason Schwartz, clinical director at Dawn Farm, a small rehabilitation center in Ypsilanti, Michigan, where recovering addicts work in the garden, kitchen and with farm animals. “Addiction is very isolating, and any kind of suffering tends to make people self-centered, to focus on their suffering alone. Getting them to focus on the needs of other living things can be powerful.”

‘Looking after the animals that are so dependent on our care has taught me, for the time in my life, what responsibility means.’

Of course, farming itself is not a cure. “Going to a farm and working has nothing to do with addiction,” says Dr. Lance Dodes, a retired professor of psychiatry at Harvard Medical School and author of “The Heart of Addiction.” “Addiction is not [caused by] a deficit of farming.” But proponents argue that the daily work does provide a structure, responsibility and sense of community that can help in the recovery of many. Most important, says Dodes, it can help build self-confidence.

In Europe, San Patrignano is among several rehab centers of its ilk. In Austria, the rehabilitation center GruÌˆner Kreis (which means “green circle”) has its patients help breed and care for French Noir de Bigorre swine as part of its program. “In general, the work with animals demands punctuality, a sense of responsibility and empathy with the animal’s needs and those of the herd,” says Robert Muhr, head of therapy at GruÌˆner Kreis. These qualities, he says, were missing from most of the patients’ previous lives.

Martin K, 25, who declined to give his last name, finds farming and caring for the open-range pigs at GruÌˆner Kreis has given his life a new sense of meaning. “I slipped so early on in life into the drug scene that I never learned to do any kind of regular work,” he says. “That is why it took me so long to get used to the daily work routine, but with time I’ve gotten used to it. Particularly looking after the animals that are so dependent on our care has taught me, for the first time in my life, what responsibility really means.”

The addicts that come to San Patrignano are a self-selected group.

“We don’t accept into treatment those who are not really motivated to change their life,” says Boschini. This jibes with the experience of addicts like Fabio Ferretti, a tall, 39-year-old patient who applied to San Patrignano many times before he was accepted to the program. Ferretti came to the nearly 300-hectare farm with experience working a printing press, but has focused his attention for the past four years on the pigs. It’s better, he says, “to work at something other than the trades we have learned.” And there is room to learn a lot – there are more than 50 professional tracks at San Patrignano. Vineyards, olive trees and pastures make up the majority of the center’s land.

The beauty and elegance of the place, however, can’t hide the fact that the residents are up against some very serious issues – among them, sexual abuses, eating disorders, depression and anxiety. On a sunny day in May, Ferretti stands by the pigpen, watching his adopted swine roll in the muck. “You can probably imagine what it means for somebody to be part of a functioning concern like this after years of only being involved in drug taking and abuse,” says Ferretti. “The work helps cure one’s disease and contributes to the survival of the community by making us self-reliant.”