Papaya in the Crosshairs: A Heated Island Battle Over GMOs

The complicated case of a GM crop. 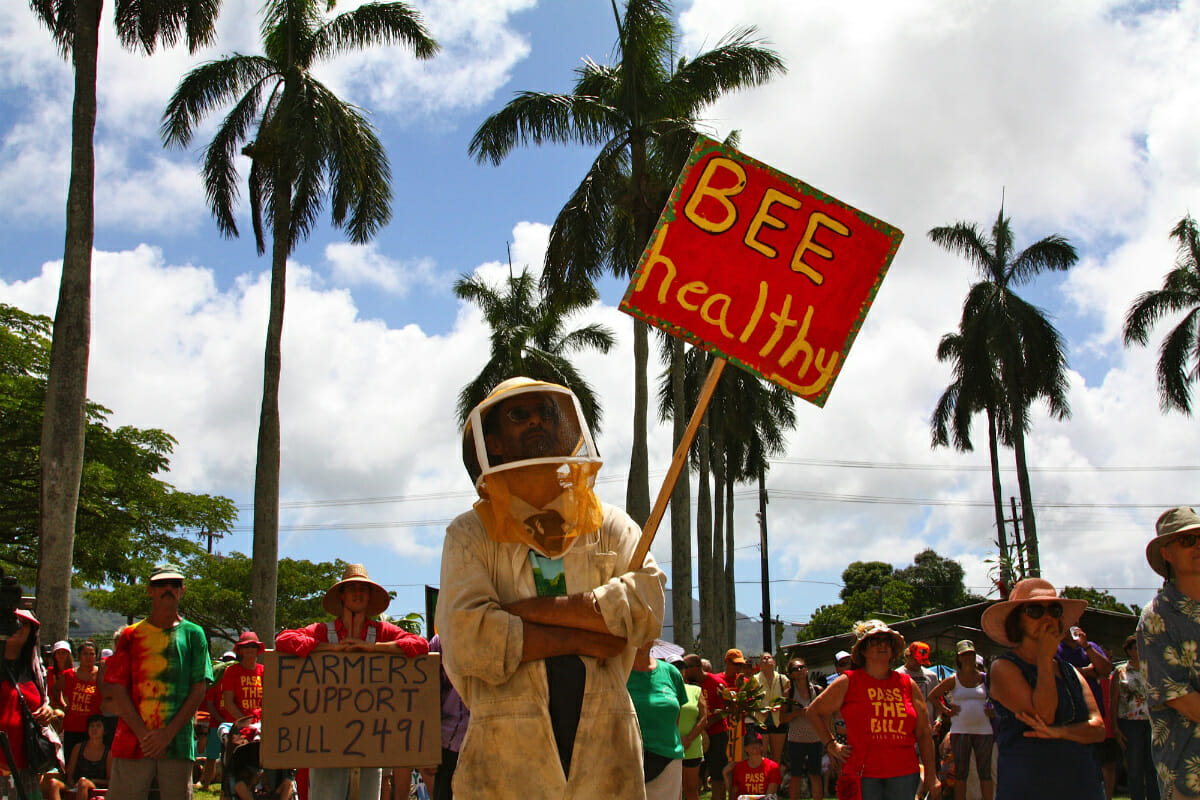 Still, other crops thrive in the island’s tropical climes — coffee, bananas, macadamia nuts and avocado. Not to mention the fruit in the center of this year’s explosive GMO battle: papaya.

For much of the last century, Hawaii’s papaya was a posh global delicacy. Exports boomed, especially to nearby Japan, where the fruit was cherished as a special-occasion gift. But in the mid ’90s, a scourge hit the Big Island — ringspot virus. It savaged papayas at a brisk clip, withering trees and poxing the fruit with nasty, ring-shaped spots.

“I remember helping my father in the field, chopping down infected plants,” says second-generation papaya farmer Ross Subicao. “By the end of six months, we had only 20 percent of our papayas left.”

Enter Dennis Gonsalves. Gonsalves is an island-born, Cornell-educated plant pathologist. And depending who you ask, he either rescued or ruined the Big Island’s papaya industry.

During the ringspot crisis, Gonsalves spent years working on a GM solution. He figured out how to insert a bit of the ringspot virus into papaya genetic material (analogous to flu vaccines that contain a few flu germs). In 1998, he introduced the Rainbow Papaya to the market, which proved invulnerable to ringspot attacks.

The media touted this papaya as a shining example — like Golden Rice — of how GM crops could help the world (as opposed to just making Monsanto richer). The New York Times called Gonsalves a “crop savior“; prestigious awards were doled out.

Now, 15 years later, well over 75 percent of the island’s papayas are Rainbows. Crops are fairly stable, and the ringspot virus is a villain of the past.

But Gonsalves’ story is not a simple win. This past April, the Big Island introduced legislation to forbid new biotech research and GM crops. After many torturous months of public debate, the bill was signed into law this month. Gonsalves had a hard fall from grace.

“Anytime I’d get up to talk at meetings, people booed me,” he says. “These women, from Babes Against Biotech, they followed me with a camera right in my face, saying ‘There is Dennis Gonsalves, the bad man who invent GMOs.'”

Gonsalves credits the anger to misplaced big-ag fears, a knee-jerk reaction against frankenfoods and Monsanto. The full history, though, is more complex.

When Rainbow Papayas were first grown, great efforts were made to keep them segregated from their conventional cousins. But over the years, pollen drift set in. Testing of supposedly organic papayas turned up prevalent GM material. Senator Ruderman says most organic papaya farmers threw in the towel.

This was a costly development. Japan, famously leery of GM agriculture, stopped importing all Hawaiian papayas. Big Island papayas started topping global do-not-buy lists. Gonsalves had rescued the papaya from disease — but at what cost?

“I guess (Gonsalves) saved the industry, sort of,” says Ruderman. “Our papaya sales dropped to one fifth of what they were, and we closed the door on our most lucrative export markets. Would you call that saving?”

In Washington and California, GMO labeling initiatives were soundly squashed this year. Many blame the influence of big ag, which spent millions of PR dollars to defeat the measures.

But on the Big Island, corporate influence was largely absent from the recent GMO battles. Colehour Bondera, co-owner of a five-acre organic coffee farm, says a few corporate shills testified against the measure, but their voices were overwhelmed by grassroots opposition.

So where were the pro-GMO lobbyists? As Ruderman noted, the Big Island’s crops aren’t soy and corn (the one notable exception, a farm which grows GM corn as cow feed, was exempted from the law). Big ag has less of a stake in the Big Island than, say, the island of Kauai — Syngenta, Dow and DuPont-Pioneer all run operations there.

‘These aren’t my neighbors, they aren’t the people I see every day. They’ve come here to interfere, because of Monsanto.’

Ruderman also believes it’s easier to combat GMOs on an island-by-island level. A GMO labeling bill foundered in Hawaii’s state Senate, but both the Big Island and Kauai passed anti-GM legislation this year, with Maui likely to follow suit.

Even if corporations had sent in the big guns, Melanie Bondera, Colehour’s wife and fellow farmer, thinks it wouldn’t have done much good. As she tells it, island natives have grown resistant to outside influence — especially from pushy mainlanders.

“This is perceived as big agriculture companies telling people what food they should grow,” she says. “(Native Hawaiians) are tired of outsiders throwing their weight around.”

But some GMO advocates define “outsider” a bit differently. “All these activists, showing up to the meetings, who are these people?” asks Gonsalves. “These aren’t my neighbors, they aren’t the people I see every day. They’ve come here to interfere, because of Monsanto. It has nothing to do with me.”

Central to the Big Island’s anti-GMO approach is something called the Precautionary Principle. It’s a borrowed concept, nicked from the UN’s Protocol on Biosafety. This protocol was adopted by 100 nations around the world — but not the U.S. or Canada.

Thought being, before adopting any new biotech, we need proof that it’s benign. Take the Rainbow Papaya. If the precautionary principle had been followed, Gonsalves would have had to show there’d be no adverse affects on crops, no long-term health effects.

Hawaii seems a natural place to institute an “Ask questions first” policy, an island state that’s wrangled with more than its share of non-native invasive species (Melanie Bondera includes “white Europeans” among these).

Hawaii’s tropical climate makes its agriculture prone to a unique set of pests and plagues, everything from the Coffee Berry Borer, a beetle that messes with the island’s iconic Kona coffee, to the banana bunchy top virus. Some non-papaya farmers on the Big Island fear that banning biotech puts them at an economic disadvantage. “Let’s say the world gets a new banana virus,” says farmer Richard Ha. “If I’m not allowed to pursue a GMO solution, but Maui and Central America are — that’ll put me right out of business.”

Susan Crawford, owner of a small-scale coffee farm in Kona, points to the mongoose. This predatory beast was introduced to combat Hawaii’s wharf rats in the late 19th century. The mongoose ended up multiplying unchecked, destroying native bird species, and not even solving the rat problem. Over 100 years later, it remains an island nuisance.

“Wouldn’t it be better if we applied a little European caution here?” Crawford asks. “We shouldn’t just introduce something new to our ecosystem, then hope for the best.”

But what of the Rainbow Papaya? Another proposed bill mandated all papaya farmers chop down their plants within 30 months — or go to jail. Ruderman says this version wouldn’t have passed; it was too austere. Instead, papaya farmers will be required to publicly register with the county government, and pay an annual fee.

“We’re like sex offenders now,” says Rubicao. He worries papaya farmers will be stigmatized on the island, subject to acts of vandalism (activists hacked down 100 papaya trees in September).

For his part, Big Island Mayor Billy Kenoi hopes the healing begins now. In a statement after he signed the bill into law, Kenoi said: “The debate over this bill has at times been divisive and hurtful, and some of our hard-working farmers who produce food for our community have been treated disrespectfully. We are determined to protect every farmer and rancher.”