Richard "Dick” Turpin was a highwayman, murderer and thug, but most of all he was a horse thief. 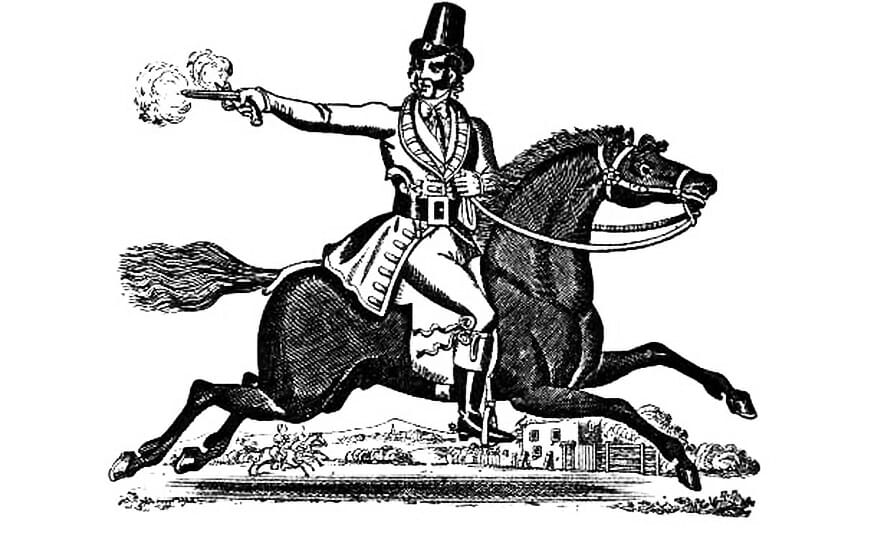 Richard “Dick” Turpin was a highwayman, murderer and thug, but most of all he was a horse thief, and it was his love of all things equine that led to his demise at the end of a rope in a public execution that was held, some might say fittingly, at a horse racing course in York, England.

Turpin is but one of a slew of infamous scoundrels in history involved in a crime that, until recently, was like stealing a person’s car and livelihood in one fell swoop. And yes, horse theft is still alive and well in the world, so much so that there are a number of organizations around the world that act to stem the crime.

Turpin, born in Hempstead, England in 1706, was a butcher by trade, but actually made his living as a criminal of far-ranging proclivities. Working at various times with a gang, single partners or alone, he was known for burglarizing rural farmhouses and torturing the female victims until they gave up their goods. He ended up robbing anyone dumb or brave enough to travel through Epping Forest, (located between London and Essex), and stealing anything worth cash that wasn’t nailed down. Including farm animals.

Turpin’s love of good horseflesh was his undoing. In May 1737 he became enthralled with a horse – akin to a penchant for flashy cars today – and by gunpoint, forced the owner, Joseph Major, to trade the animal for his own. Major, taking the initiative to capture Turpin, passed out handbills concerning the theft.

The easily recognizable animal, plus the handbills, led to Turpin nearly being caught outside a local tavern where the horse was tied up. One of Turpin’s conspirators went to fetch the animal and was apprehended. Turpin, nearby, attempted to save his friend, but during the resulting fracas, the man was killed and Turpin barely escaped.

Already on the run, the theft of Major’s horse pushed Turpin to murder when a gamekeeper with more bravado than sense attempted to capture him. Turpin fled north, took an alias – John Palmer – and would likely have remained free if he hadn’t stolen three more horses, shot a man’s rooster during a spat and threatened to do the same to the bird’s owner. Turpin’s bad behavior led to his being held by local authorities who soon learned that Palmer was actually the infamous Dick Turpin.

Turpin was tried and executed not for murder but for horse theft, which says a lot about the laws of 18th century England.

Turpin was tried and executed not for murder but for horse theft, which says a lot about the laws of 18th century England. On April 7, 1739, Turpin, riding in a horse-cart and looking handsome in a spiffy new suit, bowed to the citizens lining the streets of York on his way to the gallows. His execution was held at the York Racecourse, then being used for both horse races and executions. While the horses continue to race there today, the gallows are long gone.

After his hanging, ballads sprang up romanticizing Turpin’s exploits, obviously not written by the victims he tortured, stole from, or murdered. Besides the ballads, fictionalized accounts also made the rounds that helped propel the highwayman and horse thief into legend as a dashing rogue on his speedy mount Black Bess. He was definitely a rogue, but later writers apparently made up the speedy horse with the cool name.

Jumping ahead a few centuries, we find that horses remain a coveted prize for thieves and the crime continues to be a problem worldwide. In New Zealand, national police have been looking for a gang of horse thieves who are currently working on the South Island in that country.

Among the organizations that have sprung up over the years to try and combat this problem, is Stolen Horse International, a North Carolina-based non-profit, which is dedicated to locating stolen and missing horses worldwide and provides an internet-based network, netposse.com, that acts as a clearinghouse for information on horse theft.

One recent case that stands out is that of Wendy Cox, 39, and her daughter, 22-year-old Jaci Rae Jackson, who police and prosecutors say were behind the theft of five horses from the Southern Arkansas University (SAU) rodeo team in Magnolia, Ark., in November 2011.

According to court documents, Jackson, who was on the SAU rodeo team, was involved in the theft of the animals and a trailer, with two men, Bill Hamilton, her mother’s 39-year-old boyfriend, and George Berrish III. The horses were taken to Oklahoma and stashed near the property of Cox, the alleged mastermind behind the crimes.

Jackson, shortly after joining the rodeo team, began asking a lot of questions about the horses stabled at the school. While on a tour of the stables she was seen taking notes on the animals and the facility in a pink notebook and even commented about how easy it would be steal a horse from the stables, police said.

Investigators also learned that Jackson had had some “romantic problems” with one of the stolen horses’ owners and that other of the owners had made her “mad.”

Sometime overnight between Nov. 2 and 3, 2011, Hamilton and Berrish snuck into the SAU stables, said police, attached a large trailer to a pickup, loaded five horses inside and headed to Oklahoma.

Things quickly unraveled for the gang. While Arkansas police worked their investigation, a friend of Jackson’s went to the Oklahoma authorities and spilled Jackson’s story. Soon after, sheriff’s deputies in Oklahoma spotted the missing trailer near Cox’s home. Four of the horses were located tied to a tree adjoining Cox’s property. A fifth horse, Credit Card, deemed too easily recognizable by the thieves, had been shot in the head, had its throat slit and was dismembered for easier disposal.

Jackson, in a secretly recorded phone conversation with her friend, admitted she was there at the slaying and that the killing was at her behest, according to the police’s probable cause report. Jackson’s arrest came less than a month after the heist, with the others not long after.

Cox was found guilty of larceny charges and is serving a 60-year prison sentence. Jackson, who testified against her mother at trial, pleaded guilty to lesser charges, but hasn’t been sentenced yet. She’s looking at up to 30 years behind bars.

Hamilton and Berrish both pleaded guilty to related charges, with Hamilton getting 30 years – he received a concurrent 20-year sentence in Oklahoma – and Berrish a decade behind bars.

Cox and Jackson are still facing charges in Oklahoma on animal cruelty and other charges. Cox is also facing charges related to an earlier cattle-rustling case. She maintains her innocence in both crimes.

While a lot of time separates the stories of the Turpin and Cox gangs, their illegal activities aren’t dissimilar. But the time of balladry is past, and it’s a pretty good guess there won’t be any tunes that celebrate the illegal exploits of Cox and her codefendants.