Some unusual scraps littered Vikas Chaudhary’s wheat field over the winter. For more than two decades, farmers here in the northern Indian area of Taraori (a farming area three hours north of New Delhi) have grown wheat in the winter and basmati rice during the reliably rainy summers, cultivating some of the world’s most prodigious […] 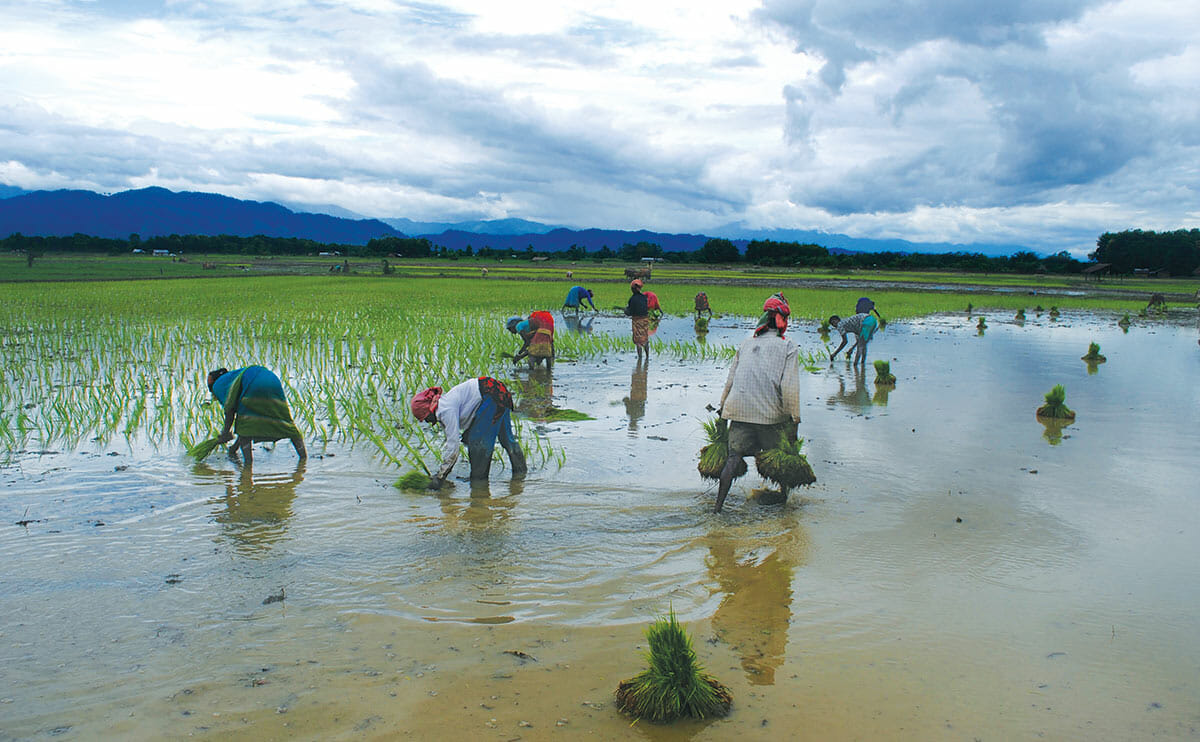 Share
Tweet
Pin
Email
122 Shares
Indian farmers plant rice seedlings in a paddy field on the outskirts of Dimapur, India, in the northeastern state of Nagaland.photograph by Caisii Mao/Demotix

Some unusual scraps littered Vikas Chaudhary’s wheat field over the winter. For more than two decades, farmers here in the northern Indian area of Taraori (a farming area three hours north of New Delhi) have grown wheat in the winter and basmati rice during the reliably rainy summers, cultivating some of the world’s most prodigious harvests of the fragrant long grain rice native to South Asia.

Now, instead of grains, it’s crushed cobs and kernels of corn on the ground.

Climate change is being blamed for the change in in monsoon patterns across the subcontinent that are denying large swaths of India its much-needed annual rainfall. The implications for the world’s food supply are critical: India grows 100 million tons of rice and grain every year – with more land devoted to growing rice than any other country. And the Taraori region is known throughout the world for its basmati rice.

Perhaps not for long. The summer monsoons – months-long bouts of heavy rain swept up from the sea by summer winds and dumped over the land – have long nourished India’s farms, rivers and reservoirs from June through September. They have been faltering in recent years, arriving late. Delayed rains have begun falling in late summer deluges that have been so intense that they have damaged crops and led to flooding.

“The monsoon is a lifeline,” Chaudhary said. “But in the last few seasons, when we want the rain, there is no rain.”

During a monsoon's arrival, tribal Naga farmers plant rice saplings in the Senapati District located in the eastern Indian state of Manipur.photograph by Caisii Mao/Demotix

This is bad news for the oblong rice. True basmati is harvested only in India and Pakistan – just as genuine champagne comes only from certain French vineyards – and Haryana, the state that includes Taraori, is one of India’s two main basmati growing regions. Figures from the All India Rice Exporters Association show that over one-third of the country’s annual basmati rice yield comes from Haryana. And other basmati-growing areas in the region are being affected by the same monsoonal changes bedeviling the paddies of Haryana.

So Chaudhary and one of his relatives turned some of their rice paddies into cornfields last year – a bet that paid off when the summer rain arrived two months late, in August.

If Chaudhary’s corn-growing idea takes root, and if Indian monsoons continue to arrive late, a widespread switch from rice to corn could lead to a spike in basmati rice prices and force some farming communities to overhaul their diets, as basmati is both eaten and exported by their farmers.

And rice farmers aren’t the only ones being impacted by these changing weather patterns. Farmers throughout India have been harmed by shortfalls of summer rain, which have left indebted sharecroppers destitute. Last year, the paucity of rainfall led to a hydropower shortfall that contributed to summer blackouts affecting more than half of the country’s 1.2 billion residents. The drought caused crops of onions and other vegetables to wither, pushing up food prices.

Villagers return from the fields on a cow-drawn cart during a monsoon in India's Narmada Valley.photograph by Karen Robinson/Panos

India’s pain is shared by many other countries in the region. Monsoons have soaked large swaths of the subcontinent, southwestern United States, Southeast Asia, Australia, and Africa. More than half the world’s residents live in affected areas. They rely on these spectacularly rainy seasons to meet much of their yearly drinking water and irrigation needs.

Scientists studied rainfall records and traced a decrease in average Indian monsoon precipitation back to the middle of last century. But it has been only in recent years that most Indians have woken up to the reality of this withering consequence of global warming, ruinous drought. According to Professor Krishnan’s findings, as global temperatures rise, water evaporates and creates more humidity, dampening summer winds and ringing a quiet death knell for annual monsoons.

“The atmosphere becomes very stable,” said Raghavan Krishnan, a scientist at the Indian Institute of Tropical Meteorology who studies monsoons. “You’re adding a lot of moisture into the atmosphere, but it’s not raining out.”

The shift could eventually see villagers here in Haryana changing their very diets, swapping out traditional rice-based recipes for those that incorporate corn. “We’re not eating maize,” Chaudhary said. “But when the climate is changing, human beings are also changing.”

Related
Dairy, Food & Drink
Yes, the Government Really Does Stash Billions of Pounds of Cheese in...Emily Baron Cadloff
Future of Food, Plants
How More Than a Century of Antarctic Agriculture Is Helping Scientists Grow...Daniella McCahey
Plants
Goodyear Wants to Make Tires From DandelionsShea Swenson
Cookbooks, Food & Drink
10 New Cookbooks We’ve Been Cooking From This SpringShelby Vittek
wpDiscuz
We use cookies on our website to give you the most relevant experience by remembering your preferences and repeat visits. By clicking “Accept”, you consent to the use of ALL the cookies.
Cookie settings ACCEPT
Privacy & Cookies Policy