The Rancher Creating Community for Queer Farmers, One Social Media Post at a Time

Ryan Goodman launched his ‘Pride in Agriculture’ campaign to change and grow the industry into something more inclusive. 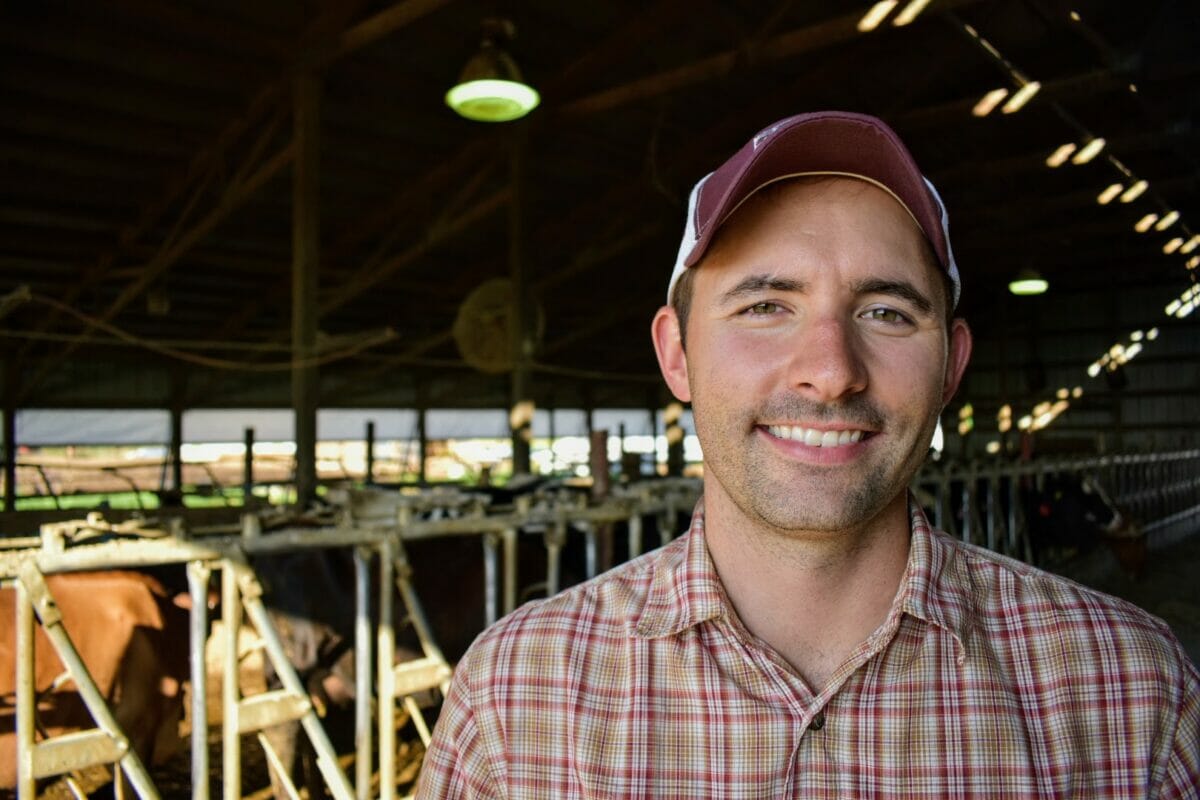 Ryan Goodman understands the weight that words can carry. He’s seen how thoughtful conversations can make a positive impact in a world he feels has become increasingly polarized.

Goodman, who raises cattle in Virginia’s Blue Ridge Mountains with his partner Aaron, is part of the LGBTQ+ community. And he’s long felt there needs to be more effort by the food and agriculture sector to ensure diverse groups feel there’s a place for them.

This Pride Month seemed like a good time to try to influence change. For the last few weeks, Goodman has taken to Facebook, Instagram and Twitter to share and celebrate the stories of other members in the queer community who are making contributions in agriculture. He’s also used it as an opportunity to engage with keyboard warriors and others who oppose his mission.

Goodman spoke with Modern Farmer about the campaign and why he generally believes often the smallest actions can have the biggest impact. He shares his hopes  for the future and offers advice to folks in agriculture who may have reservations about fully embracing their sexuality or gender identity.

Modern Farmer: Where did this idea of a Pride social media campaign come from?

Ryan Goodman: I’ve been having these conversations both formally and informally for a number of years now. It started in 2020 when my employer at the time had released a culture document without mention of diversity or inclusion. I spoke to him about it and I was told that if I didn’t like it, I should leave. They weren’t interested in having a conversation of recognizing diverse people—not just LGBTQ+ people, but race, religion or gender.

For Pride Month, I really wanted to help improve the visibility of LGBTQ+ people in agriculture and rural communities. I want to spark productive discussion about the diversity in our communities and what it means to be an ally. I hope I can inspire some of our industry organizations and associations to evaluate their policies, their organizational culture and how inclusive they are, too.

MF: You engage with folks who are critical of what you are doing. There are a lot of people asking ‘why do we need a month for this?’ or ‘why can’t we just do our jobs and just put our heads down and not make this an issue?’ How do you respond?

RG: I try to respond to the issue, not the person. A person that’s coming to argue, I know I’m not going to change their mind in one conversation. That being said, I’ve had people who’ve sent direct messages to me to follow up and we’ve had productive conversations. It’s critically important for people who feel attacked by negative comments to see there is support for them but also a way to respond thoughtfully.

For those people that say we shouldn’t have a full month: We have celebrations like this all the time that aren’t exclusive. It’s Dairy Month, too, and we’re all celebrating that in the food and agriculture sector. But I think there is a large argument to be made, knowing that historically LGBTQ+ voices haven’t been heard or have been minimized. This puts emphasis on the importance of dedicating a month to have these conversations.

MF: What does being an ally in agriculture look like?

RG: It looks different for everyone, but often it’s about the small actions. For example, if we’re at an event and someone sees a ring on my finger and says, ‘How’s your wife?,’ being an ally is being aware of how we ask things, acknowledging diversity and that not everyone is in a heterosexual relationship. A different way to ask that would be: ‘How’s your spouse or your partner or your family?’

It’s also about being visible. This doesn’t mean you have to walk around with a rainbow on your clothes. It can be as simple as speaking up when you hear someone making a negative comment. Talking peer-to-peer can be one of the biggest influences on what is perceived as acceptable and how we view the world. 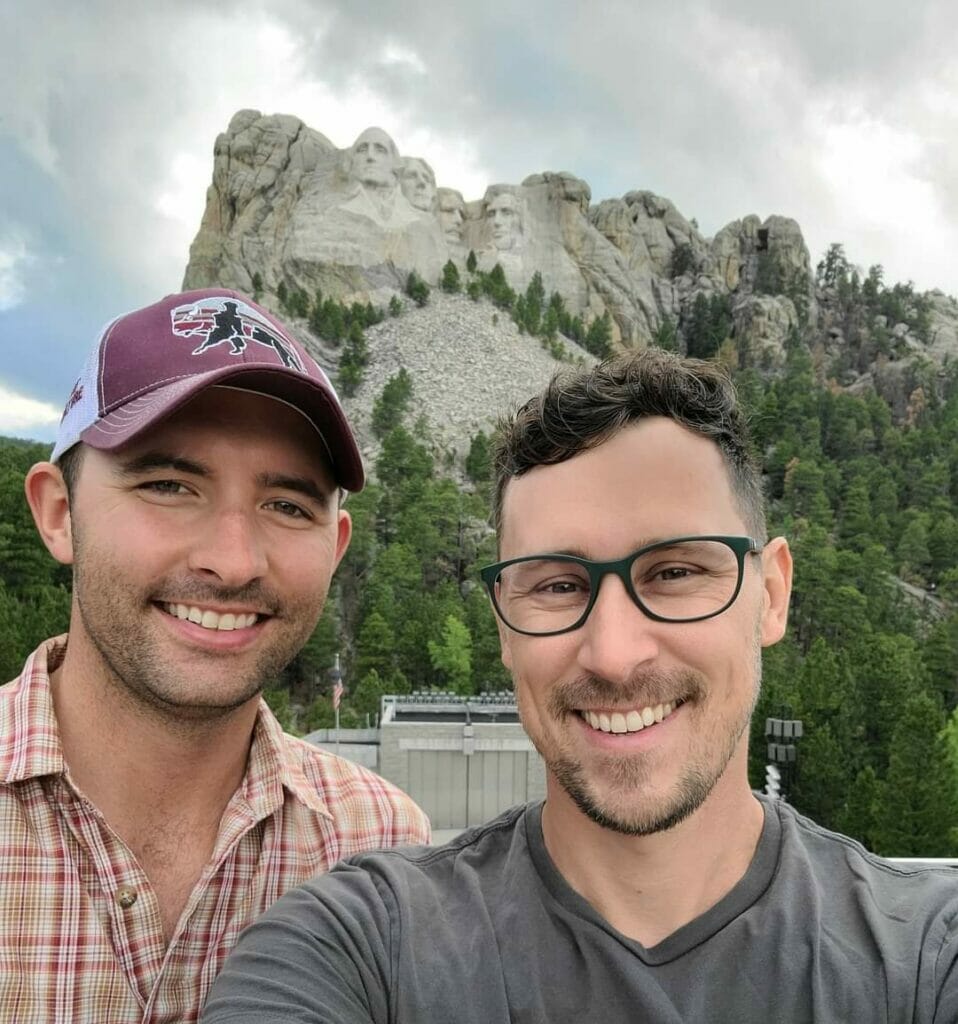 Ryan and his partner Aaron.

MF: In what ways could the agriculture industry improve upon inclusivity?

RG:  We have a lot of diverse voices in our industry, especially when it comes to the finishing and processing stages. Those diverse voices are often not treated with equity or represented in leadership positions within the sector or in our farming associations. That can go a long way in solving our inclusion and equity problems in our industry.

MF: Is there a person, place or organization that is excelling in their efforts to create community for LGBTQ+ folks and other diverse groups?

RG: The Beef Farmers of Ontario in Canada have been very transparent about how it isn’t the most inclusive of the diversity in their industry. Recently, its board took it upon themselves to start having those conversations internally.

It sought external resources to help it identify how it could be more inclusive and how it could get more diverse voices involved. It has actively laid out its goals very publicly. It takes some vulnerability in admitting that there is work that can be done, but it’s important in moving forward.

MF: What was your own experience of coming out like?

RG: It was not a comfortable process. I was very fearful of the negative consequences of sharing my story, not just personally, but professionally. Growing up and ranching in rural communities, conservative communities, I heard a lot of discriminatory, negative statements made about people who are like me.

There are people who have severed relationships with me after learning about who I am, but there have also been people that have stepped up and been an ally. I don’t think coming out is ever a done deal, but knowing I have allies makes me feel confident about being authentically myself.

MF: Do you have any advice to someone in agriculture who might be fearful about coming out about their sexuality or gender identity?

RG: Know you have people in your corner there to support you whenever you are ready to tell your whole story and be your authentic self. The negative response will stick out, but there will always be more people who are willing to support you, whoever you are, and your journey.

Not every single conversation will change someone’s mind and not everyone’s going to agree. We can always try to focus back on what our shared experiences are. Focusing on the positive things can help work through it.

MF: What are your hopes for the future?

RG: LGBTQ+ rights and visibility are very politically divisive. We tend to push back when we’re uncomfortable or when we disagree, but having productive, thoughtful, civilized conversations will allow us to make progress.

I hope people can come to that recognition that it doesn’t have to be divisive, whether it’s LGBTQ+ issues, diversity, equity, inclusion or consumer perceptions about our industry and production practices. The quicker that we can get to that realization, the sooner we will be better off.

I read this with tears in my eyes. I don’t know you, Ryan, but I am so proud of you for being open and out. I imagine it has taken courage and constant re-commitment to face some of the bigotry that I know exists in our rural communities. Thank you for your work! I am praying for more Allies in your path, and more courage for people hiding the true light of their beings in the shadows! You are a wonderful model for them, Ryan!