With Dandy Ram Farm, Bo Dennis makes space to be unapologetically himself. 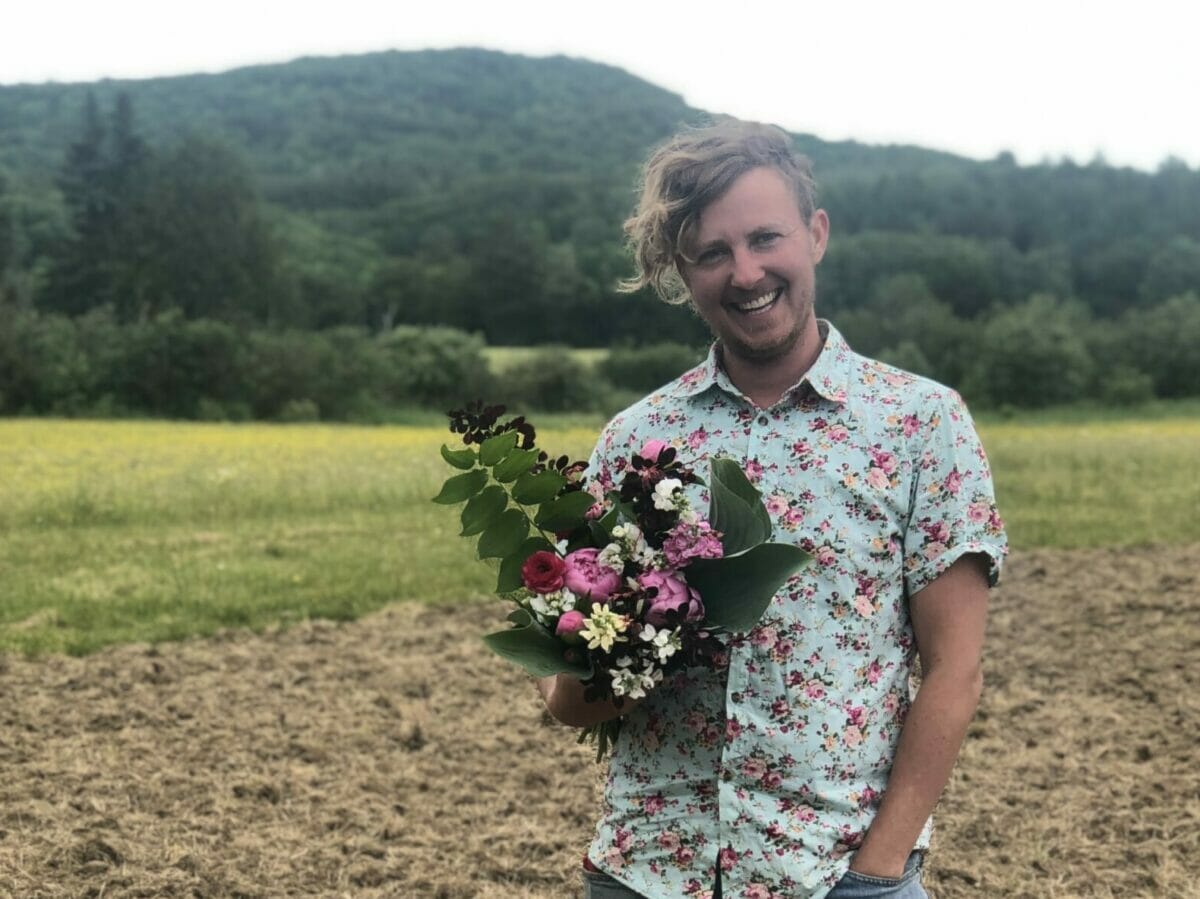 What does it mean to cultivate joy? Does it mean to take existing structures and rework them into a system that not only supports you and your work, but also elevates it? Or does it mean to devote your time, space and energy to things that truly bring you happiness?

These are questions that Bo Dennis has thought about for years. As someone who once segmented different parts of himself, the answer seems to lie in joining those pieces together.

As a queer, trans farmer in rural Maine, Dennis was used to hiding parts of himself. He would try to dress in certain ways to avoid getting misgendered or dampen his outgoing personality to dodge scrutiny. The effects of homophobia and transphobia chipped away at his resolve, little by little and caused him to shrink inward.

But farming is a very physical, immediate job. There’s no hiding when fields need to be planted or sheep need to be sheared. And it was that physical work that brought Dennis back to his body and back to himself. “I’m working with my body when I’m working on my farm. And this is a queer body. So they are linked for me,” he says.

Dennis began farming in 2008 with a job on a dairy farm. From there, he moved to a vegetable farm, spending six years cultivating organic vegetables. After that, he worked with friends on a sheep farm, raising herds for both meat and wool. He loved how much there was to learn and how farming allowed him to be creative, innovating as he went. “’I’ve only been farming for 12 years, which means that I’ve only grown tomatoes 12 times. There’s always more feedback.” In 2019, Dennis moved full time into sustainably farming flowers and opened up Dandy Ram Farm. 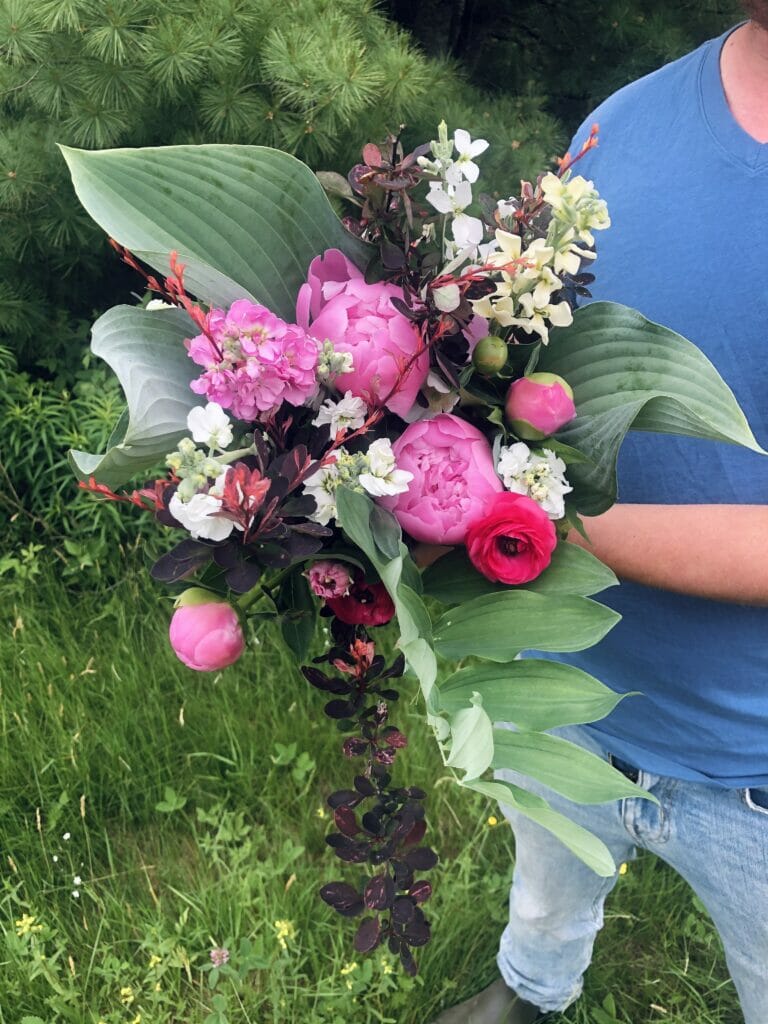 At first, Dennis leased land from his friends at Seek No Further Farmstead, before purchasing his own plot of land this year. He’s planning to fully move his farm by next year from leased land to his own 18 acres. He has plans for annuals, perennials and balsam trees for wreaths he creates. He works with unusual additions to his bouquets, like juniper and grasses, adding texture among the lush colors. There’s space on his farm for a greenhouse and a flower studio and anything else that “creates a magical space where [the] queer community feels safe and welcomed to be within rural space.”

He hopes to incorporate a space for his boyfriend, a baker, on his farmland, musing that one day they may fuse their passions and have a “bagels and blooms” event at a local farmer’s market. That’s the creative mindset that helps him on the farm, where he says he sees potential around every corner. “Applying that mindset of ‘how can I innovate? And how can I tweak this?’ Which, in my mind, is how a lot of farmers’ brains work,” he says.

Dennis is thoughtful about holding the deed to this land, recognizing that he resides on the ancestral land of the Wabanaki people. He says he’s committed to ensuring that profits from his farm go back to those communities and he contributes to Indigenous initiatives such as the Bomazeen Land Trust and Wabanaki Reach. “If I profit off of that land, I’m thinking about, ‘I’m paying taxes to a federal government that is colonizing. I will pay the same amount in those taxes for my land and my house to Indigenous led solidarity projects, for access to land and food and medicine,’” he says.

He also works to connect new farmers to resources and education that could help them, through his work with the Maine Organic Farmers and Gardeners Association. For Dennis, the goal is to break down as many barriers to farming as possible. He says that he knows too well how hard it is for marginalized people to receive farming education and funding, as he had to try to navigate that world as a queer and trans person. “And I hold so much privilege as a white person to be able to recognize that this is explicitly not working for people of color, and Black and Indigenous people that are farming or involved in food production,” he says.

But Dennis faced those unequal systems head on and now stakes a claim to be both seen and heard in rural spaces. “I don’t want to live in a city,” he says. “My heart feels so held within rural spaces and green spaces. And yet, I don’t believe that we should have to sacrifice really important parts of ourselves and our communities to be in those spaces.” So Dennis is working to dismantle the old structures and create better ones for himself and those who come after him. As he wrote in an essay for Edible Maine, he is proud to be one of the role models he needed when he was 18.

For many it is not an easy journey, this life. Gender issues can make it much worse. Gender identity has been one of the most misunderstood and confusing parts of human nature. Walk tall and proud. Mother nature does not care, nor do those that are enlightened or have a modicum of empathy.

Popular
The Potential of Propolis for BeekeepersHolly Regan
7 Smokable Plants You Can Grow That Aren’t MarijuanaBrian Barth
Yes, the Government Really Does Stash Billions of Pounds of Cheese in...Emily Baron Cadloff
How to (Actually) Get Rid of Fruit FliesEmily Baron Cadloff
What to Do With an Abundance of PeppersShelby Vittek
Explore Modern Farmer
Related
Plants
Why You Should Grow Almonds and Thyme TogetherShea Swenson
Food & Drink, MTMF
Meet the Former Chefs Growing Restaurant-Driven Produce in Suburban AlbanyKerri Sullivan
Environment, Plants
Making the Case for IntercroppingShea Swenson
MTMF
Meet the Modern Farmer Helping Immigrant Farmers Sell Their ProduceBridget Shirvell
wpDiscuz
We use cookies on our website to give you the most relevant experience by remembering your preferences and repeat visits. By clicking “Accept”, you consent to the use of ALL the cookies.
Cookie settings ACCEPT
Privacy & Cookies Policy