I Failed at Growing Food for Humans, So I Grew It for the Bees Instead - Modern Farmer
Personal Essay, Plants

I Failed at Growing Food for Humans, So I Grew It for the Bees Instead

As I tended to native flowers on my fire escape, I discovered there’s a lot more to love about urban wildlife than squirrels. 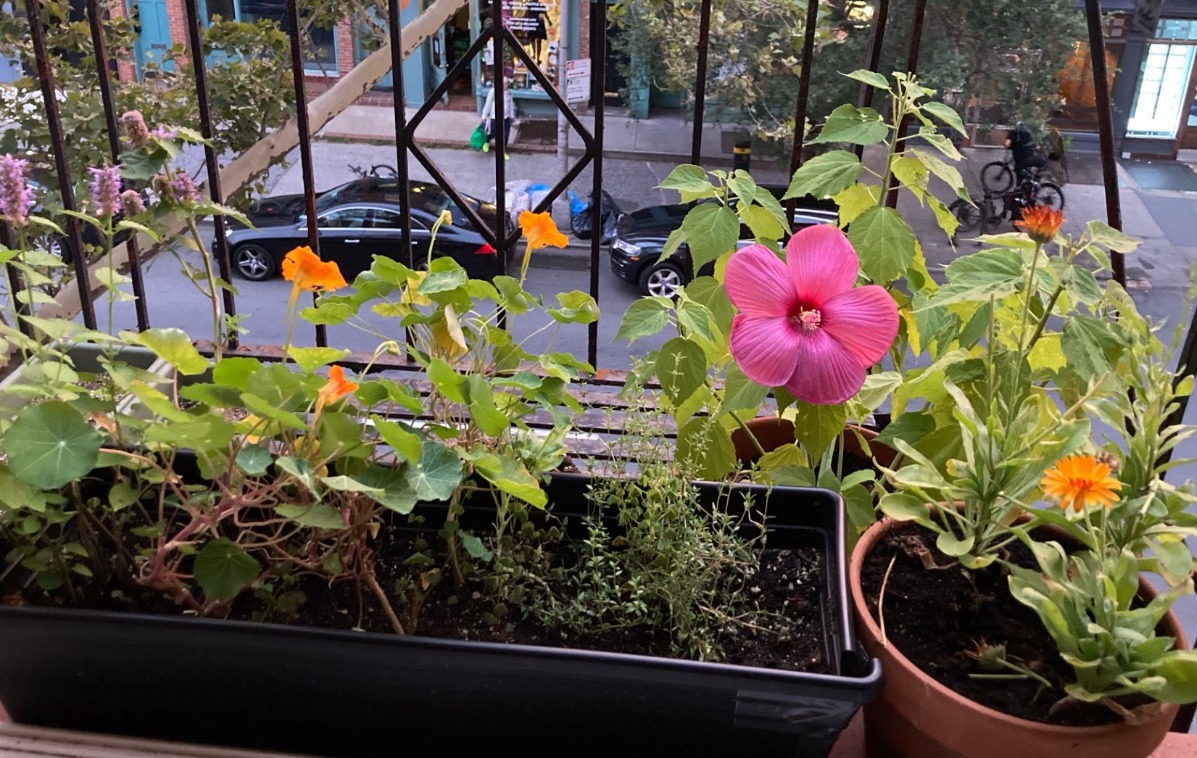 My decision to grow native flowers to support local pollinators might smack of self-righteous ecological do-good-erism. But the truth is, it was born of bad luck and incompetence.

Operating under the misconception that any urban apartment dweller could conjure up something to eat in a patch of outdoors and wild with optimism, several springs ago, I planted cherry tomatoes and peppers on my Brooklyn fire escape. I was thrilled as they thrived and flowered. But one morning I woke to catastrophe: They’d all been devoured by squirrels. The next year, the squirrels came for half the lettuces I seeded in window boxes; the other half I killed outright by forgetting to water them. Feeding humans with fire escape produce was feeling increasingly like a losing proposition, so I aimed lower. That third spring, I put out thyme and tarragon and nasturtiums, thinking I could at least grow treats to offer my pet rabbits. A heatwave hit while I was out of town and clobbered them all.

RELATED: How to Build an Urban Rooftop Garden

Failing at plants—my lifelong strong suit—is depressing even if it is predictable and/or inevitable. Ironically, I write about food systems for a living. At the time of my third “garden” defeat, I happened to be researching the climatic resilience of native perennials, as well as the importance of declining native pollinators (versus imported honeybees) on crop production and biodiversity. As I surveyed the withered detritus in my planters, I wondered: What if I used my fire escape to conduct a bit of science—a discipline that outright embraces failure? I could stick some native plants out there to determine if they were harder to kill than my “crops” and, at the same time, I could see who showed up to pollinate them. By removing the onus of an expected harvest, there’d be no way for me to lose.

On Saturdays at the local farmers’ market, I scouted for flowers of varied shapes, sizes and colors. Different critters evolved to pollinate different plants in different ways, so what you plant determines which animals you get. Because of the way their compound eyes take in light, bees see (and are lured by) blues, purples and yellows on the higher frequency side of the color spectrum. Some species, such as squash bees, prefer flowers that yawn open. (Adorably, squash bees are known to nap beside flower ovaries, taking breaks from foraging and the heat.) Bumblebees go for flowers with tiny-pored anthers, such as catmint; they rapidly quiver themselves to knock pollen grains out and onto their hairy bodies. Butterflies and hoverflies favor the wide landing pad of a sunflower’s face. Night-flying moths are drawn to white blossoms that glow in moonlight. Tube-shaped, especially red, flowers were made for hummingbirds, which beat their wings 80 times a second as they dip in their slender beaks to sip nectar. 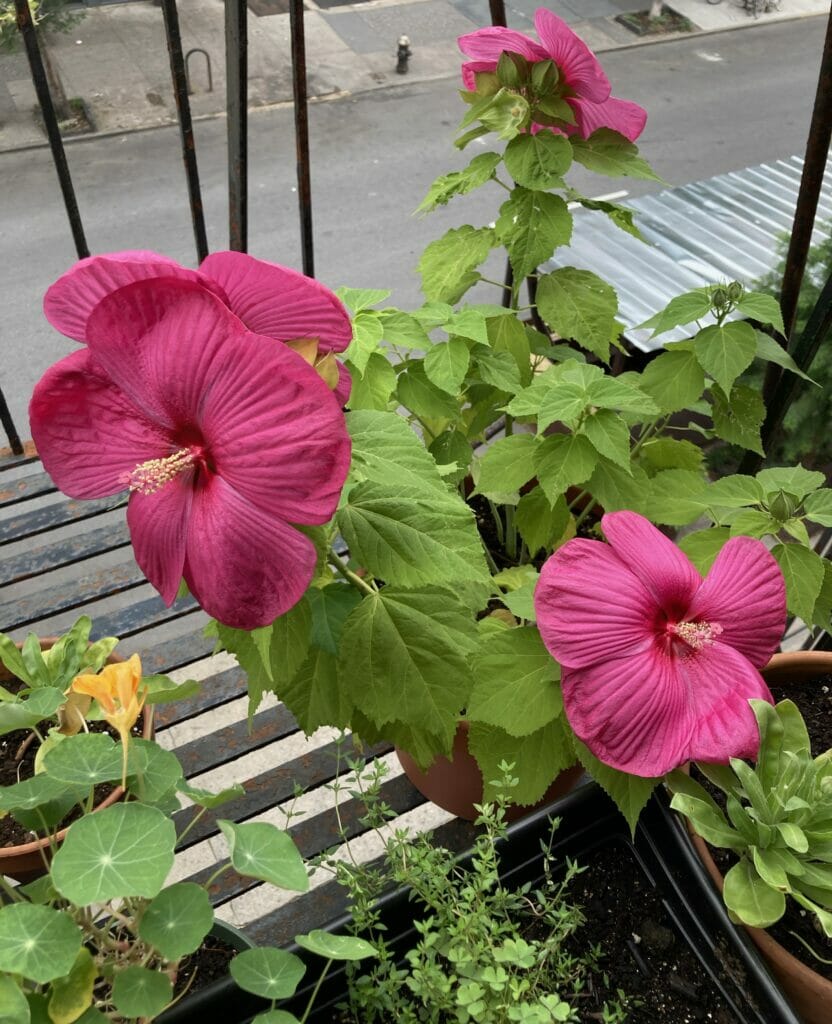 Week after week, I carted plants home and arranged them out on the wrought iron slats. Swamp rose mallow, whose tight buds untwist overnight into enormous magenta saucers. Echinacea, their prickly heads encircled by pale purple skirts. Yellow-eyed asters. Black-eyed Susans. Gaggles of violets. A massive lavender shrub. The previous year’s murdered nasturtiums reseeded themselves, popping up between stalks of anise hyssop. Clover volunteers bloomed in pots of little orange flowers whose name I can never remember. It was looking so lush and lovely out there that I found I was paying more attention to what I was growing. Unlike with the lettuces, tomatoes and herbs, I took the time to deadhead and remove dried leaves from the top of the soil, making sure to water more diligently.

Suddenly, the squirrels no longer gave a crap about my fire escape; henceforth, they were seen digging up my ground-floor neighbor’s tulip bulbs. But my first pollinator visitors weren’t quite what I’d hoped for. They were honeybees, likely buzzing over from a rooftop colony two blocks away. Eastern bumblebees were next—not rarities, although they were at least native bees.

RELATED: The Best Plants to Attract Pollinators, by Region

As temperatures rose and the flowers bloomed on and on, things started to get interesting. I’d peek through the window as I was drinking coffee or putting on socks and I’d see a riot of activity all over my flowers—especially the sweet-scented hyssop, around which the bumblebees bumped at each other with surprising aggression, each intent on having the flowers all to itself. I discovered small sweat bees the color of jewels and others with yellow-striped thoraxes and metallic green abdomens—another type of sweat bee. There were teensy fliers that I studied through binoculars to identify as not-flies. Large, blue-black mason bees zigged and zagged over the mallow as if they couldn’t decide where to land. Leafcutter bees, with crisp black and pale stripes, darted efficiently from blossom to blossom. One morning, I found a mysterious bee colored a deep, soft black all over, like a nugget of charcoal, resting on a leaf.

There are more than 400 species of native bees in New York State, and even experts have a hard time identifying them beyond their family or genus. I was definitely no expert and, at first, my not-knowing seemed like its own sort of failure. But week after week, as I cataloged my insect visitors in a little notebook by their traits, I marveled as the list nevertheless grew and grew. By the time summer and blossoms began to wind down, I’d counted about two dozen species—not shabby for a two-foot by four-foot rectangle of Brooklyn real estate.

Bees weren’t the only insects I tallied. Cabbage white and sulphur butterflies stopped over, as did migrating monarchs and red admirals. Ants and beetles and flies and wasps marched and fluttered through, making my fire escape feel like a true biodiversity hotspot. I never did see a hummingbird, but as the weather cooled, I’d wake to find cardinals and doves sitting in the planters, gorging on flowers gone to seed. I rejoiced at their arrival and the realization that I hadn’t encountered a squirrel in months.

…a very funny and informative article! I am about to plant my first flower box in Brooklyn and I know exactly what I will put in it. I’d like to observe a riot of bee activity outside my window — and a bee napping in flower ovaries.

Loved yr bee article. As a hit and miss gardner yr article is something to aspire too. Pretties and pollinators. Thanks for sharing.

Informative and inspiring article. Enlightens us about how a bit of ingenuity and a pinch of determination can help even the smallest of our local wildlife.