What Does the Future Look Like for Georgia Peaches? - Modern Farmer
Plants

What Does the Future Look Like for Georgia Peaches?

Despite their ubiquitous association with the state, peaches are no longer Georgia’s biggest fruit crop. As temperatures rise, growers and researchers are working to ensure that climate change doesn’t kill the industry. 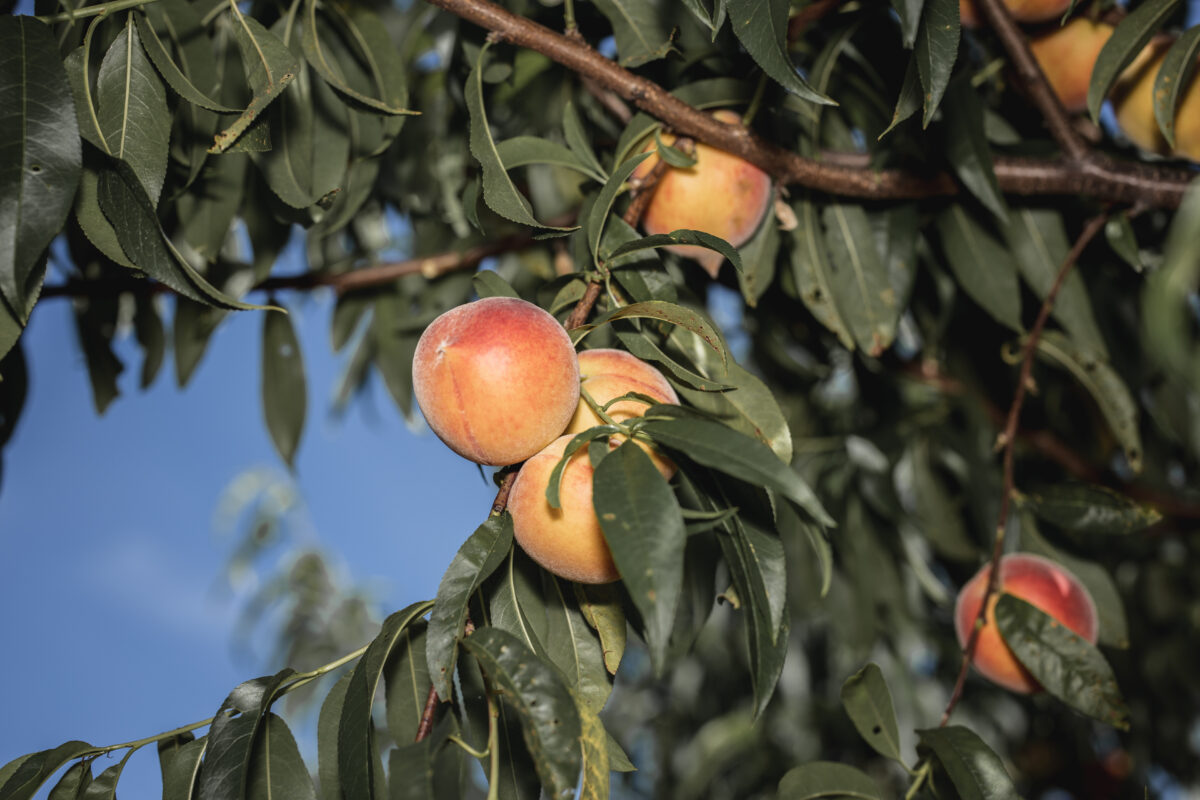 Driving his pickup truck through his family’s Georgia orchards, fifth-generation farmer Lawton Pearson recalls his earliest memories of growing up with peaches. “I would ride with my dad, sitting in the passenger seat. He would look that way and I’m looking this way, and that limb comes through the window and slaps you in the face,” he says. “It’s seriously like getting a whipping with a peach stick. I mean it hurts.”

Those were simpler times.

Now, Pearson is one of the people responsible for overseeing Pearson Farm, where he feels a sense of duty to continue the legacy of growing the state’s fruit. “My generation has been real fortunate to inherit that brand ‘Georgia peach’ and we’re trying to leverage that and use that as much as we can to our advantage, while it still has a ring to it,” says Lawton.

But while Pearson and other Georgia growers are committed to growing Georgia peaches, a shifting climate is throwing every challenge their way.

Despite being the “Peach State,” peaches aren’t actually Georgia’s biggest fruit crop (that’s blueberries, by the way), yet they remain ubiquitous—from their appearance on license plates to the state’s “I Voted” stickers. There’s even an annual festival held in their honor. 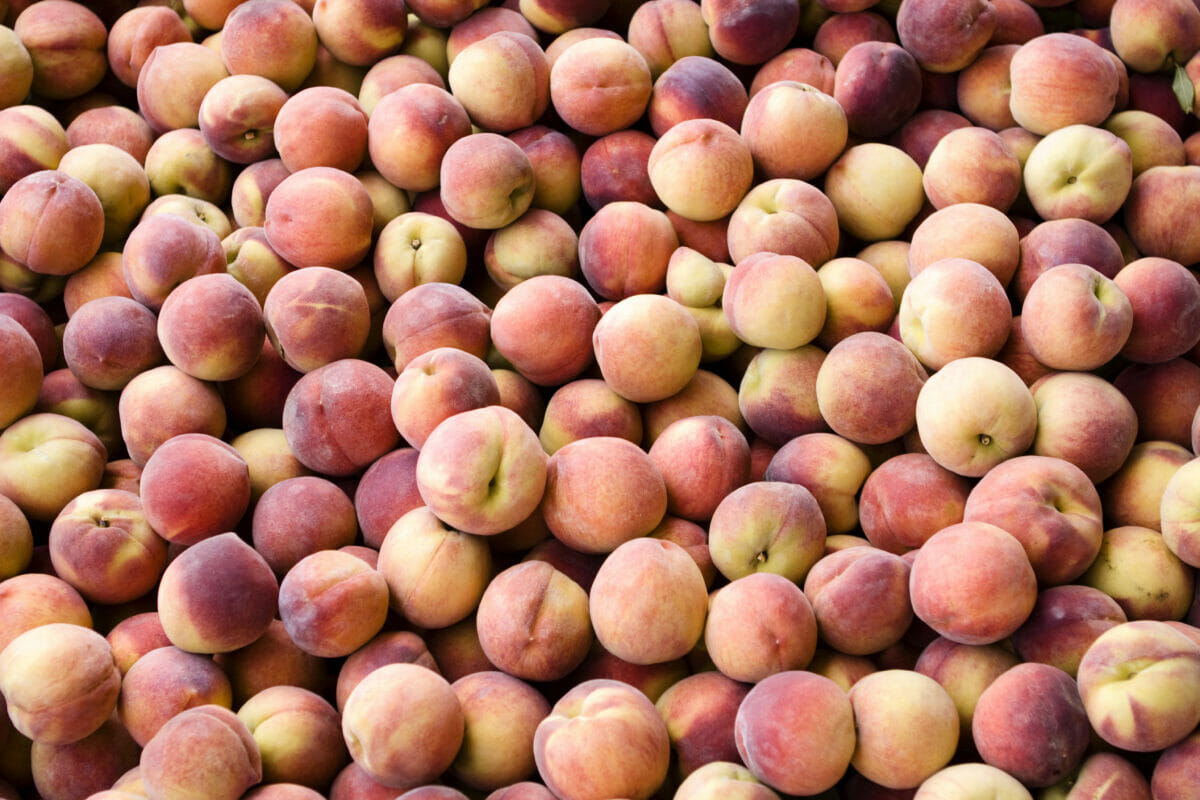 Much of the state’s peach farms are concentrated in the middle of the state in Fort Valley—and none of them exclusively grows peaches. Pearson Farm also grows pecans, which it started planting around 60 to 70 years ago when, faced with new competition from California growers, Georgia farmers could no longer rely on peaches to turn a profit.

Despite growing more acres of pecans, Lane still considers peaches its primary crop. “It’s what we’re known for,” says Sanchez. “It gives us some diversity so that, if you do have an off year in one crop, you’ve got the other crop to make up for that.”

RELATED: This Guy Drives Around the Country Selling Georgia Peaches Out of a Truck

One of the challenges facing peach trees is the fact that they need a certain number of chill hours each year, when the plant goes dormant as temperatures range between 32 and 45 degrees Fahrenheit. At Pearson, they grow about 45 varieties of peaches, all of which have their own “personalities,” says Pearson. Most peach varieties need about 800 to 900 chill hours, which isn’t a guarantee as the state gets warmer. According to a report by the North Carolina Institute for Climate Studies, Georgia’s warmest consecutive five-year interval was between 2016 and 2020 with 2016, 2017 and 2019 being the warmest years on record.

“The problem is that, year after year, the weather is very variable. And we’re getting warmer winters, which is creating some fluctuation in the chill accumulation and that quality of chill that they acquire,” explains Dario Chavez, an associate horticulture professor at the University of Georgia (UGA). If peach trees don’t get the necessary chill hours, then they won’t produce flowers. And without flowers, there won’t be peaches.

Then there’s the fact that, every year, there’s almost always a frost in early March. It’s one of the many things that keeps Pearson up at night. “Every time I talk about what I do, I think I’m more and more crazy,” he laughs. 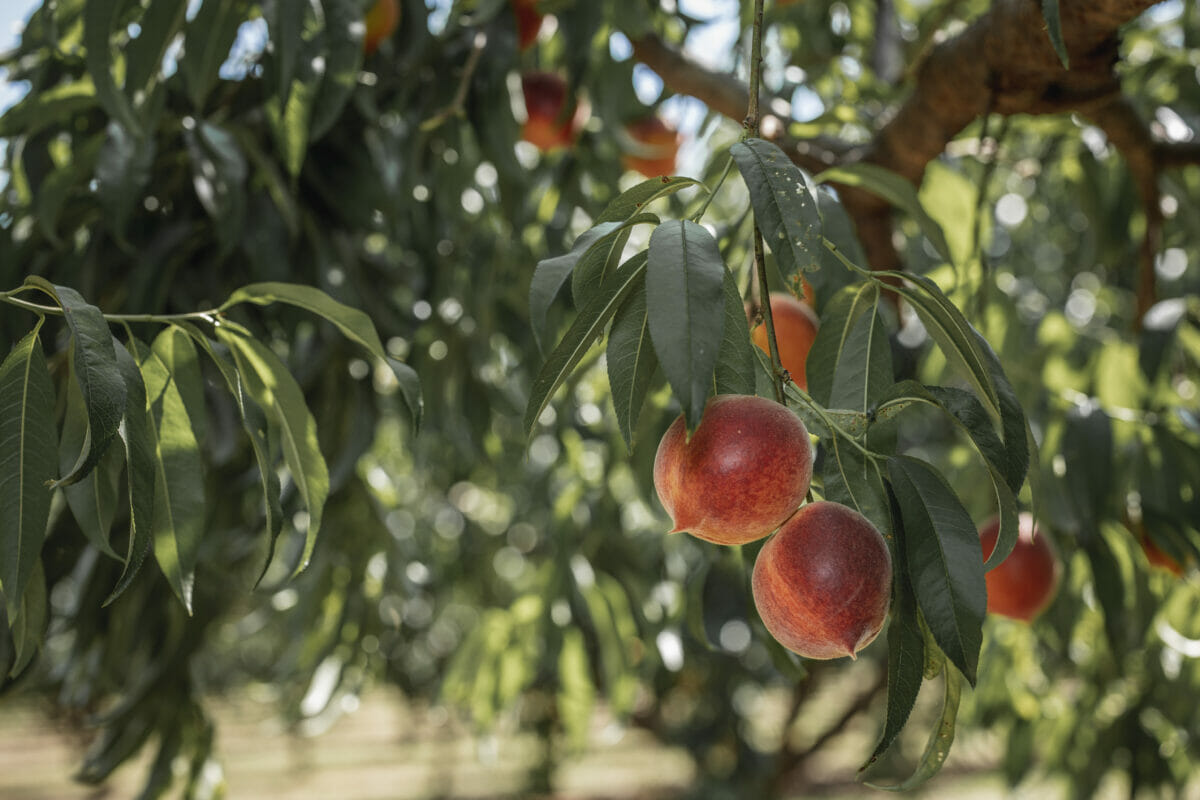 Pearson’s average full bloom date is around March 7 or March 12—and the farm’s last frost date is about seven days after that. “On average, we’re going to have frost and that’s how it plays out. But we make it through most of them. We lose peaches pretty much every year. But our average crop is I guess good enough to keep us here,” says Pearson.

Climate change is happening, he says, but all they can do is adapt. There’s the loss of chill hours, but there are other issues, too, such as insects and other natural disasters that can wipe out an entire crop. But that’s just the nature of farming, says Pearson. “In the midst of all that, we’ve made really good peach crops the last four, our last five years,” he says. “So, really not complaining, just adjusting as we need to. And if it gets back cold again, I’ll adjust to that, too.”

One of the ways farmers are adjusting is by looking at the research conducted by agricultural climatologist Pam Knox, director of the UGA Weather Network, who is well versed in the situation at hand. The state has been on a warming trend since the 1960s, says Knox, and it’s clearly linked to the global warming effect caused by greenhouse gas emissions. “The humidity is also going up, which causes some problems for peach trees, like fungal diseases that grow on the leaves,” she says. “That reduces the amount of sugar that can be captured in the fruit because they’re not doing as much photosynthesis.”

RELATED: Making It Rain: A Timeline of Weather Control

The Weather Network provides farmers with data that helps them determine what stage their plants are in, says Knox. It has 88 stations across Georgia, which measure things such as temperature and precipitation, wind speed and direction, soil temperature, moisture, humidity and soil radiation. Some farmers even have a weather station at their orchards. “It gives them a chance to monitor how many chill hours we’ve accumulated over the winter, and there’s also some tools on our website that allow them to look ahead over the next night to see what the likelihood of frost is,” she says.

In the long term, researchers such as Chavez are developing new varieties of peaches that require fewer chill hours. Growers in Florida have found success with such varieties, and the hope is that Georgia will, too. Chavez has a 12-acre research orchard in Griffin, Georgia, and about eight of those are for trialing peaches. He collaborates with a rootstock breeder at the USDA to develop new varieties of peaches. In South Georgia, there’s a breeding program that tests out varieties that are considered lower-mid chill. 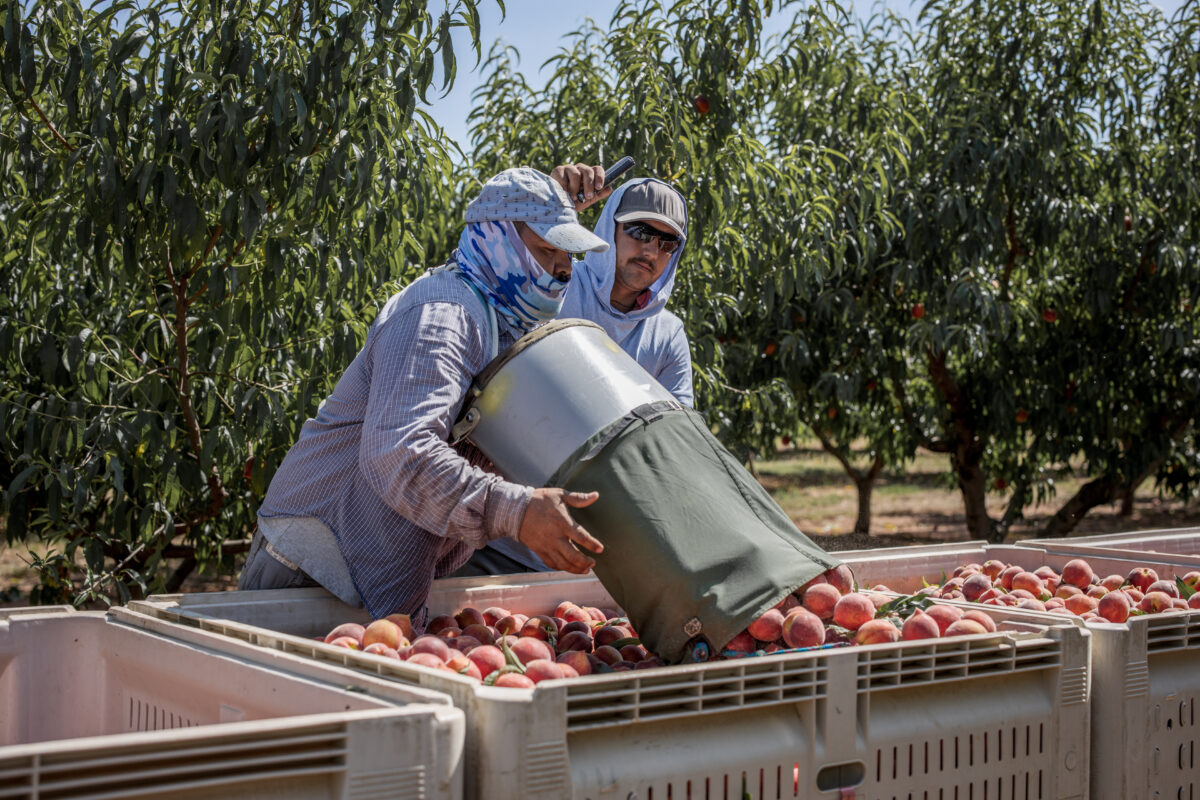 Chavez has also experimented over the past two years with a product called nanocellulose, a plant-derived material that creates a protective layer on the bud when it’s sprayed on the plant. “We’re having some interesting results, which is making us think that there may be potentially some possibility of using it commercially in Georgia and other areas of the United States as well,” says Chavez. “So, that is something that we’re trying to do also, trying to address that situation, where plants bloom earlier, just because winters get warmer.”

Part of adjusting is letting go of the idea that Georgia peaches need to be number one in the country. It’s become impossible for them to compete against California peaches, which are grown in a milder climate and look pink and red, as opposed to Georgia’s traditionally yellow-fleshed peaches. Instead, Pearson is focused on producing peaches that are simply delicious. “It’s not paramount that we have the biggest fruit. What’s paramount is that we eat good. As long as we eat good and our fruit eats well, we’ll be fine,” he says.

When posed with the question of whether peaches in Georgia will always be here, Chavez is reassuring. “I truly think that our industry is something that has been cemented here in Georgia, and it’s probably something that will have multiple generations to come,” he says, likening southeastern peach growers (including the ones in Florida) to artists because they have to deal with everything from insects and diseases to weather and find ways to make it work. “I’m not worried that [peach growers] will not adapt to whatever climate-wise comes along. It will hurt, don’t get me wrong, but I think that they’re already thinking about it. So, I’m really happy to be working here, because I think that it’s a very stable industry.”

https://www.globalweatheroscillations.com/climate-cycles
This should help Chris123.

What happened to Global Warming? It failed… so now we call it Climate Change. It is now believed that the planet is in a new cycle for global COOLING for the next 25 to 30 years. Climate change has always been present from when they started record keeping so nothing new. Stop the FEAR please.