In Canada, Indigenous seed steward Tiffany Traverse is focused on rediscovering, cultivating and preserving the traditional foods of her community. 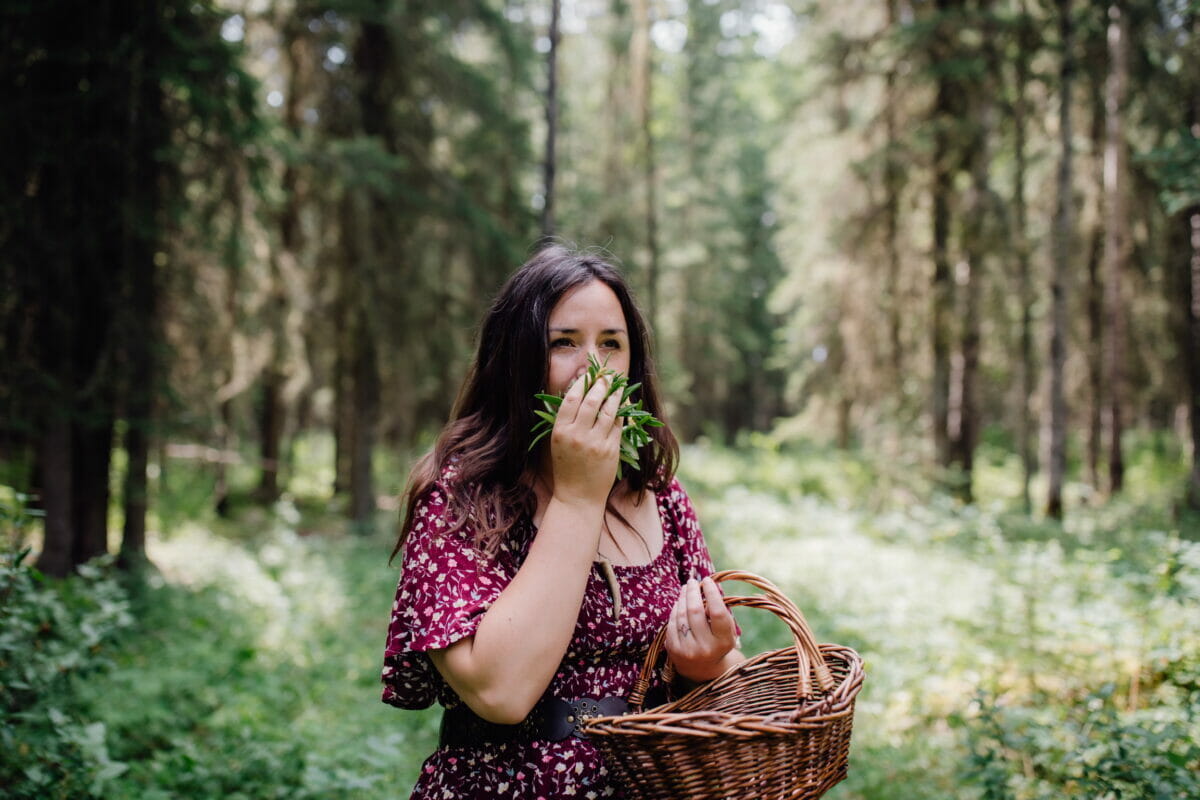 When Tiffany Traverse thinks about growing and eating the same food that her ancestors ate, she gets excited. “I want others to feel that way, too! We should all be able to feel that connection to place and food,” says the Indigenous farmer.

Traverse and her husband own and operate Fourth Sister Farm, a small homestead located in Treaty 8, a territory that includes 39 First Nations communities in Northern Alberta, Northwestern Saskatchewan and Northeastern British Columbia. Traverse is of Secwepémc and Swiss heritage and it’s here on her farm that she strives to reclaim the traditional history and foods of her people. But she wasn’t always the avid gardener that she is today. 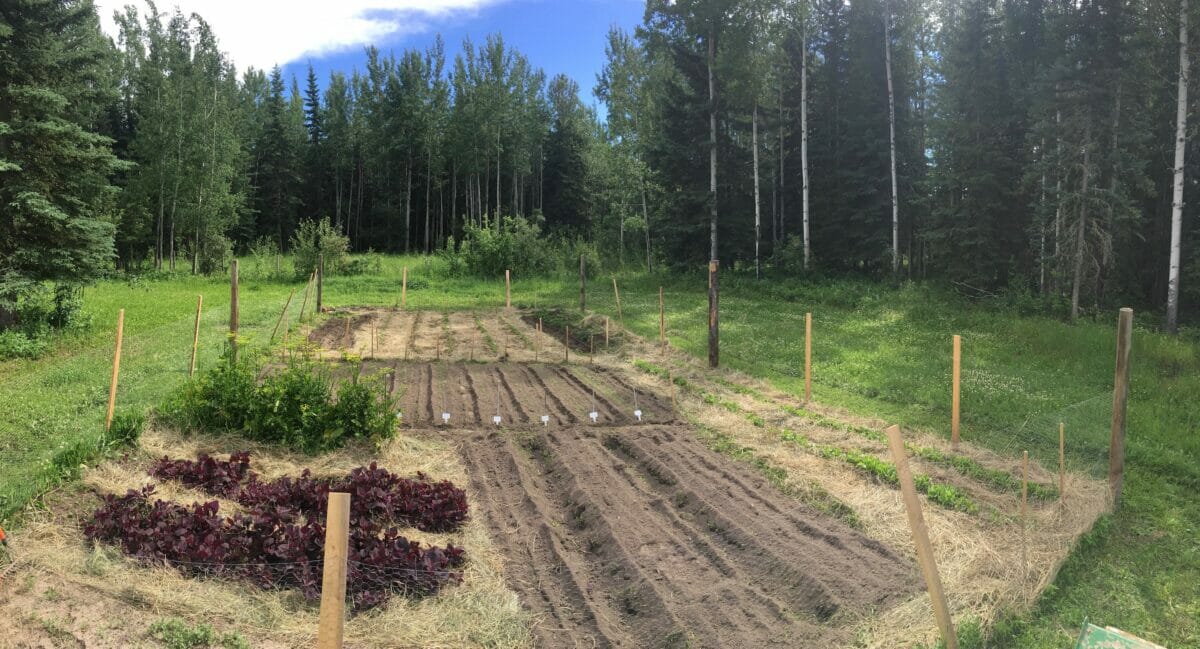 In 2015, when Traverse first purchased the land that would soon become her farm, she had no formal gardening experience, only what she had learned from her grandparents. “I just started planting seeds in the Earth to see what would happen,” she says. Despite her lack of experience, Traverse had faith in what the seeds had to offer. “That first year was a real learning curve, but I trusted the seeds to teach me.”

Traverse found value in starting small, researching ancestral foodways and allowing herself time and space to really sink into the work. She grows fruits and vegetables such as squash, corn and watermelon for eating, but she found her passion in the stories that seeds are so eager to tell. “I was hooked and hungry for more,” she says. 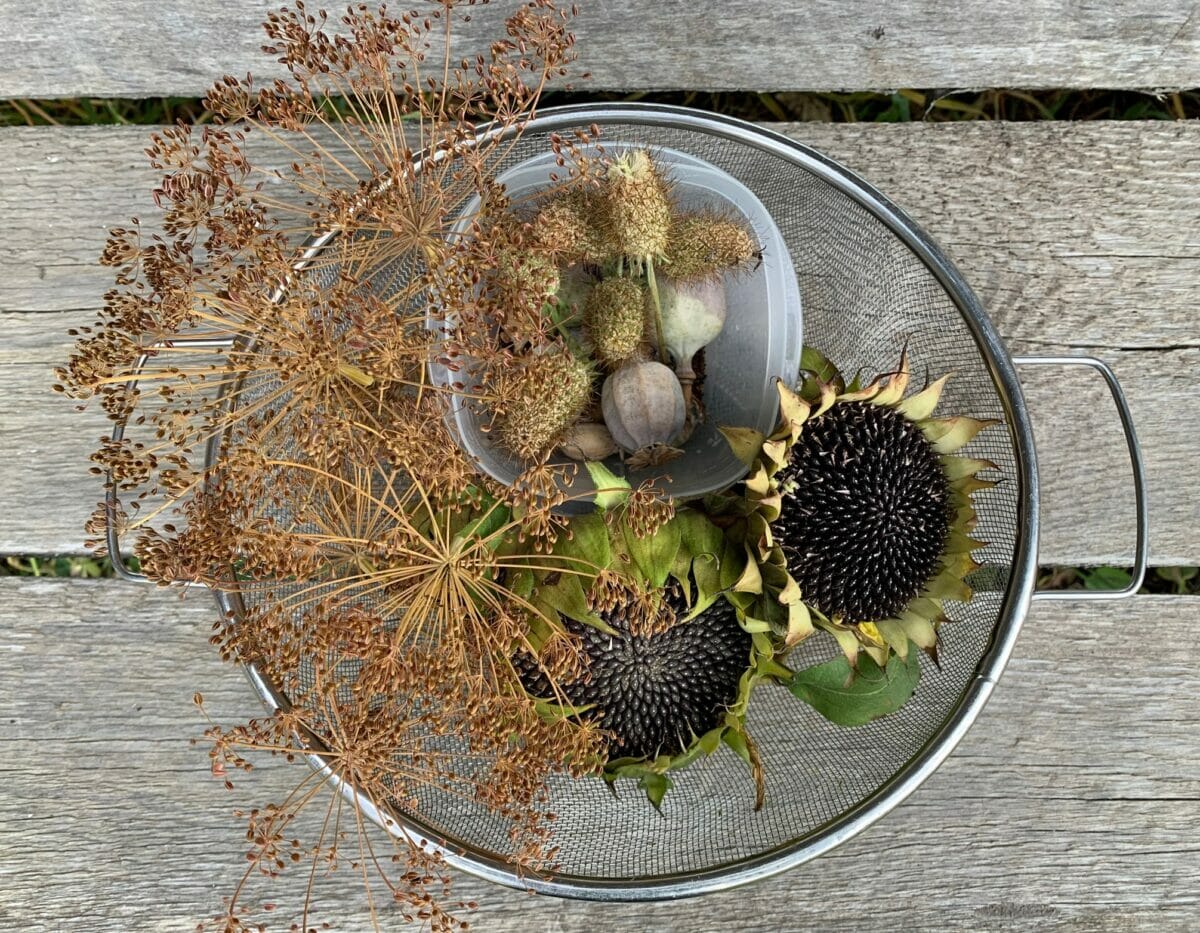 A harvest of seeds from Fourth Sister Farm. Photo courtesy of Tiffany Traverse.

The first crops that Traverse successfully harvested for seeds on her Zone 2 farm were snap peas, calendula and spinach. She found they grew well in the area’s short season and were easy seeds to process and save. With a limited 90-day growing window, unpredictable frosts, heavy clay soil and drought conditions, growing seed crops at Fourth Sister Farm is certainly a challenging endeavor. But within this challenge, Traverse sees opportunity. “Our short season and limited water creates a whole host of opportunities for adaptation,” she says. “Our plants are definitely put to the test.”

In recent years, Traverse has volunteered to trial a number of other crops, including participating in a carrot-breeding project organized by the University of British Columbia. Launched in 2018, the Canadian Organic Vegetable Improvement (CANOVI) project is a five-year collaborative breeding program that aims to identify and develop varieties that excel in Canadian organic farming systems. The project is focused on Nantes carrots, a type that matures faster than other carrot varieties, making them perfect for Traverse’s short season. And the crop has significance on both sides of her family. “I joke that Secwepémc and Swiss are root people through and through, but it’s true,” says Traverse, who has also trialed rutabaga and radicchio for the project. Yet she finds herself always coming back to the carrot, which happens to be the most popular garden vegetable grown in Switzerland. 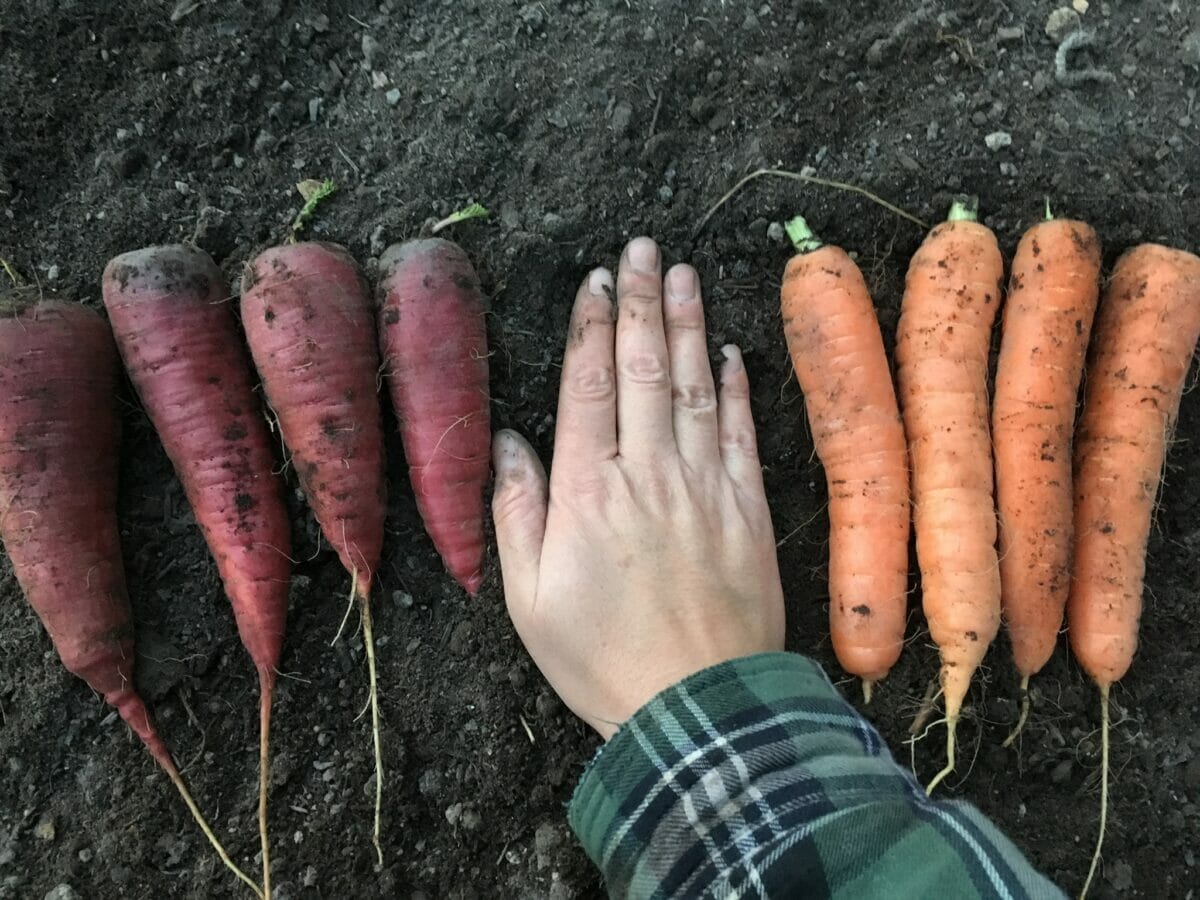 While her farming journey originated with Traverse reconnecting with her Indigenous roots, the carrot trials served as a catalyst for exploring her ancestral Swiss foodways, of which she’s just beginning to scratch the surface. She’s located a few seeds including potatoes, beans and a red corn from Ticino, an Italian-speaking part of southern Switzerland. “It’s important for me to connect to all of my ancestral foods,” Traverse says. “This is where my journey is taking me.”

Not every crop that Traverse has trialed on her farm has been successful, including attempts at growing upland rice and peanuts. “My hope is to acclimate them over the course of a few years and maybe have them grow one day in the field, without cover,” she says. Although the past three seasons have proven unsuccessful, Traverse is not giving up. “Maybe the fourth year’s the charm?”

RELATED: What Agriculture Can Learn From Indigenous Science

This concerted effort toward growing nutritious, regionally adapted and culturally significant foods is the cornerstone of Traverse’s work, and she is also looking to grow more native species in her gardens, specifically Secwepémc foods. “I’m really focusing on such plants as qwléwe [Nodding Onion], skwekwíne [Spring Beauty] and various types of camas. These are true Secwepémc foods, carefully stewarded and selected by my ancestors for millennia and roasted in pit fires, usually eaten with sqlélten [salmon]!or tcets’ [elk],” she says. 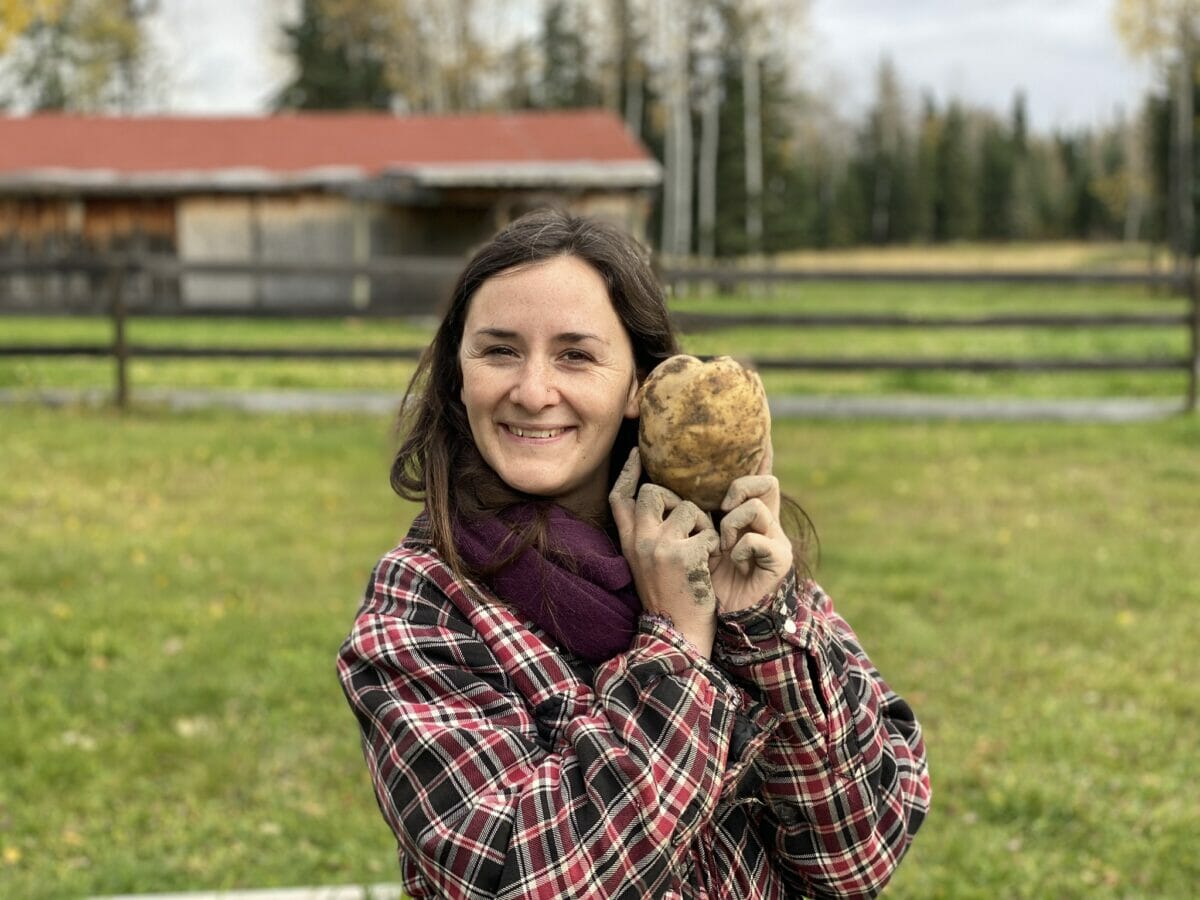 Although Traverse’s work is grounded in the past, she always has an eye on the future. Most of her breeding work revolves around identifying and selecting for climate-resilient traits as well as studying the native plants in her region. Plus, seed breeding is inherently focused on ensuring food security for future generations.

In the years since she planted those first seeds, Traverse has partnered with organizations such as the Indigenous Seedkeepers Network and SeedChange (formally USC Canada), where she now serves as the board chairperson. More recently, she started a job as the seed collection lead at ASKI Reclamation, an organization focused on integrating ecological and First Nations’ knowledge with industry’s demands and best practices. There, she’ll work with a team of native seed collectors to gather, clean and conduct germination tests on species that are not only crucial to restoration work on their territory but also culturally important. “There are so many opportunities with this role,” says Traverse, “and ways that we can help assert the Nations’ position on species that are pivotal in protecting and healing the land from industry and other forms of disruption.”

What does the future hold for these culturally relevant seeds? “Although I have immense anxiety over our exponentially increasing climate chaos, my work with seeds and my ancestral foods has given me great relief,” says Traverse, who doesn’t believe that there will ever be a time where she is not stewarding and caring for land and seeds. “We need more people mobilizing. We need to inspire our youth and the elders—and even the settlers—to get on board with this work. We need to revive our Indigenous autonomy and solidarity and focus more on community good.”

It looks like wild cucumber in Tiffany’s sieve, in the plastic container? How is it used?