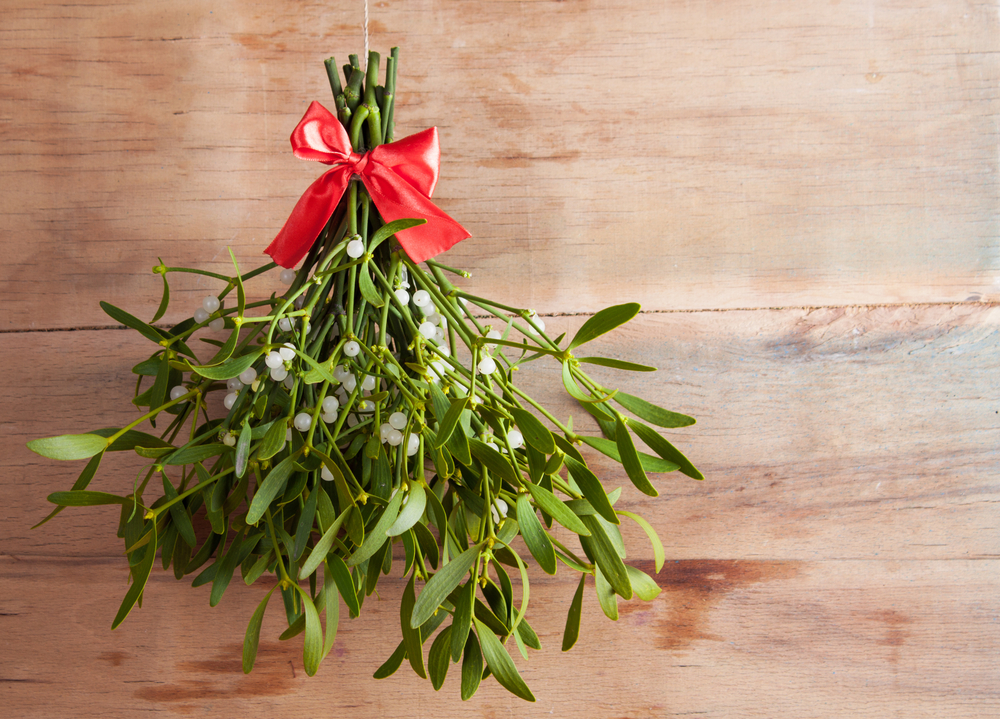 Despite its festive reputation, mistletoe is no good for trees.
Photography by Oleksandr Rybitskiy, Shutterstock.
Share
Tweet
Pin
Email

If you want to brighten up a doorway with a little Christmas cheer, you can’t go wrong with a sprig of mistletoe. With more than 1,000 species around the world, mistletoe is generally easy to find and its variety of berries make a nice decorative touch for the holidays. Plus, you might find a (consenting) kiss under a carefully placed bough of mistletoe.

But don’t eat those berries, as pretty as they may be. Though birds find them to be tasty, they can be toxic to humans, causing vomiting, blurred vision and even seizures. And you might not want to place it too close to your Christmas tree, lest it not make it to the big day.

This is because mistletoe is a parasite. It attaches itself to a variety of host trees, including poplar and ash, embedding its rootlike structures into the trunk of the tree. Then, the plant slowly sucks the life out of its host. Over time, this can kill the host tree, one limb at a time. 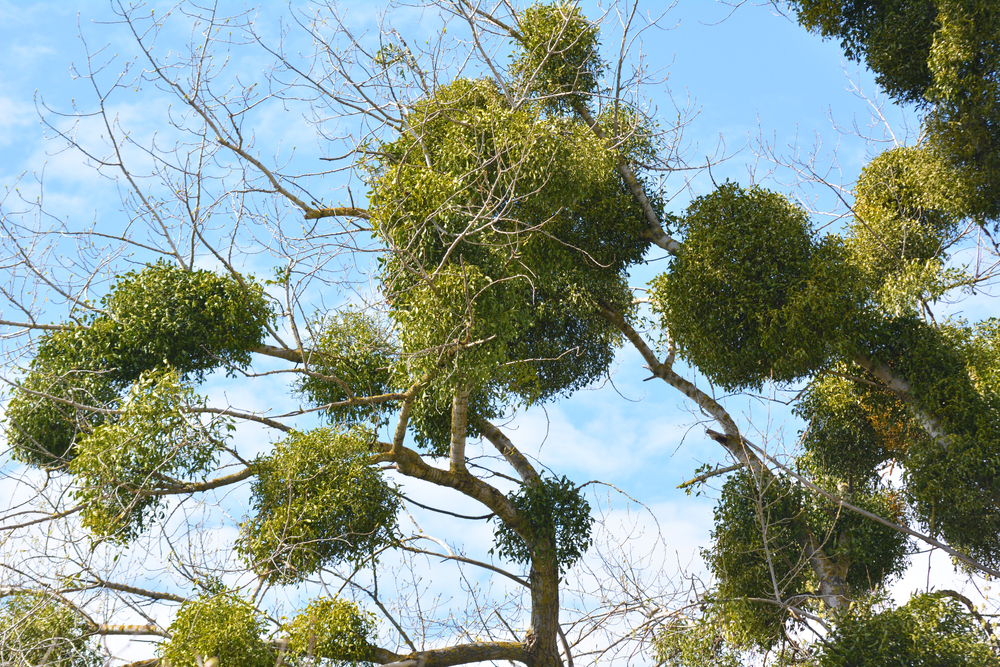 Mistletoe, a parasite, taking over a tree. Photo by Orest lyzhechka, Shutterstock.

In a new paper on mistletoe, researchers at the University of California, Riverside (UCR) have discovered that not only does mistletoe strategically clamp onto host trees to siphon their nutrients, but multiple bunches of mistletoe on the same host can actually communicate with each other, working together to keep the host plant alive, so they can continue to be fed.

“Mistletoe recognize when the resources available from the host change and adjust their own demand accordingly,” says Paul Nabity, a researcher on the paper and assistant professor in the department of botany and plant sciences at UCR. In an email, Nabity described how mistletoe have the ability to switch between producing their own food and taking it from others.

All plants are autotrophic, Nabity says, meaning they use photosynthesis to make their own food. Humans and other animals are heterotrophic, meaning we eat food from other sources to get our nutrients, rather than making it ourselves. But mistletoe are unique. They can create their own food, using photosynthesis, but instead, often switch to collect most of their carbon from a host tree. Nabity says the parasitic plant can steal up to 80 percent of their needed carbon, essentially switching between autotrophic and heterotrophic systems, as needed. That means mistletoe evolved to use less energy and get more resources, allowing a host plant to do their work for them. Not too shabby for a holiday decoration.

What’s more, mistletoe have learned how to work together to get the most out of a host, like squeezing the last bit of toothpaste from the tube. In a coinfection, if more than one mistletoe plant latches onto the same host tree, each mistletoe will up their own levels of photosynthesis, sapping just a little bit less out of the tree. They’ll work together to keep the tree alive for longer.

So how do mistletoe know when there’s another bunch sniffing around the same tree they’re already on? This is where it gets seriously cool. There is evidence that plants can “smell” each other, emitting chemicals that carry signals of stress or “other physiological predicaments to neighbor plants, who recognize the signal and prime themselves in preparation,” Nabity says. Mistletoe could be sniffing out their neighbor plant or they could be communicating through the host tree itself, since they’re connected to the same xylem. Nabity says he’s hoping to do further research to find out.

Okay, so mistletoe are poisonous to humans and can kill their hosts. Why should we keep them around? Well, mistletoe have an important role in the food chain for birds and other pollinators. Because they flower in the winter, the plants are one of the only sources of food for animals at the time. They serve an important ecological function, and they look damn good doing it.

Very interesting! So does this parasite just develop out of nowhere or how does it pick which tree to grow on. We have mistletoe here where I live in NC but I’ve never seen any as big as in that photo. For some reason I like looking for it in trees as I’m driving by or in my woods. Just found some for the first time in one of my trees in a wooded area.

Popular
Why Don’t We Eat Turkey Eggs?Dan Nosowitz
7 Smokable Plants You Can Grow That Aren’t MarijuanaBrian Barth
6 Differences Between Llamas and AlpacasAndrew Amelinckx
Goat Sex: Everything You Wanted to Know But Were Afraid to AskAndrew Amelinckx
What’s the Story, Wishbone?Rebecca Katzman
Explore Modern Farmer
Related
Animals, Environment, Health
To Stop New Viruses Infecting Humans, We Must Protect Bat HabitatAlison Peel, Peggy Eby, Raina Plowright
Animals, Food & Drink, Lifestyle
The Great (Sticker Shock) ThanksgivingLindsay Campbell
Environment, Food & Drink, Water
Egg Whites Could be the Key to Cleaning Our OceansShea Swenson
Environment, Food Waste, Technology
Could Dissolvable Cranberry Film Replace Plastic Packaging Someday?Emily Baron Cadloff
wpDiscuz
We use cookies on our website to give you the most relevant experience by remembering your preferences and repeat visits. By clicking “Accept”, you consent to the use of ALL the cookies.
Cookie settings ACCEPT
Privacy & Cookies Policy