Nine things you should know about our favorite Christmas plant 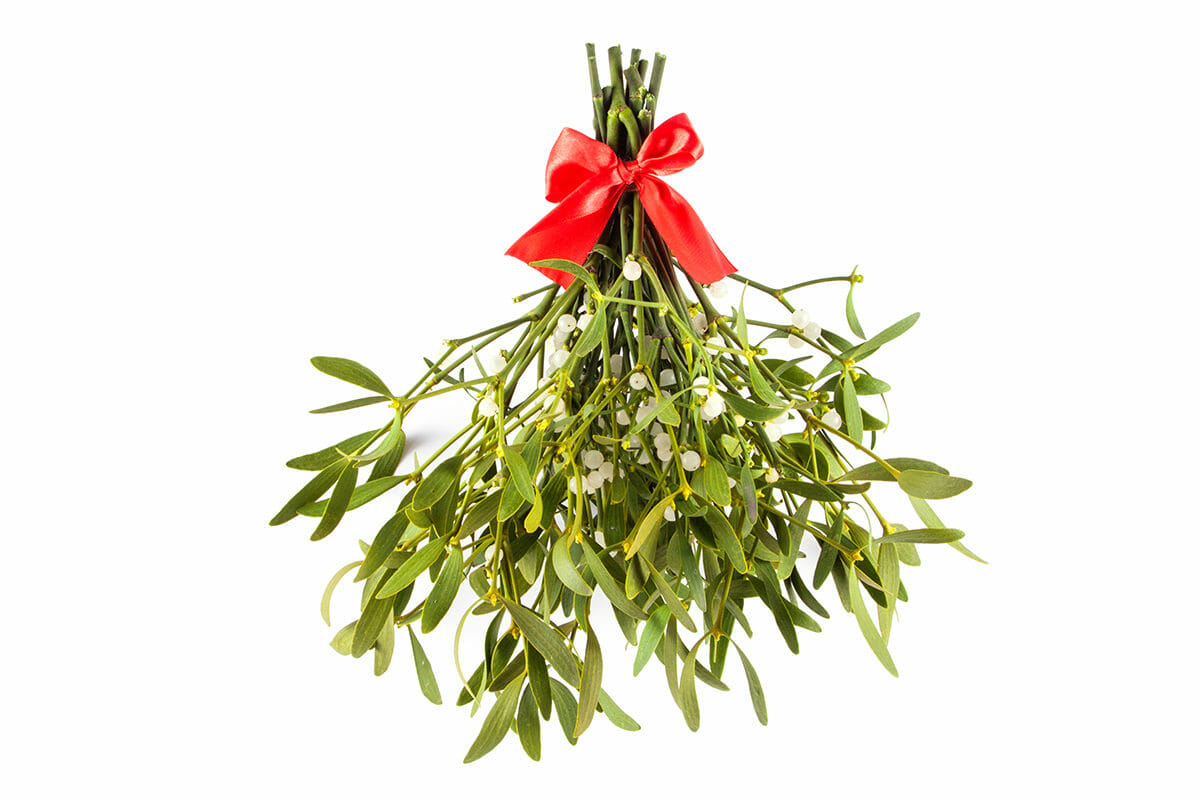 What sort of plant is it?

Mistletoe is definitely not your typical shrub – it’s a parasite that attacks living trees. Technically, mistletoes – there are over 1,000 species found throughout the world to which botanists ascribe the name – are actually hemi-parasites. This means they obtain a portion of their energy through photosynthesis, and the rest is extracted from other plants. Mistletoe species have evolved to plant themselves on hosts ranging from pine trees to cacti, but the species most commonly associated with European-based mistletoe mythologies (like kissing beneath it on Christmas) are typically found on large deciduous trees, like oaks.

Does mistletoe kill its hosts?

It can, eventually. The plant sends its tiny roots into the bark’s cambium layer, where it siphons off water and nutrients, slowly weakening the tree. A mature tree can withstand a small amount of mistletoe with no problem, but if it spreads profusely the tree will eventually die, one limb at a time, as the life is literally sucked out of it. However, mistletoe doesn’t take out whole forests like some diseases – just a tree here and there. Ecologists actually view mistletoe as an important part of a healthy ecosystem, as the berries are a major food source for birds, who also find the dense foliage useful for nesting – and the dead trees become purchase for raptors.

How does it get up in trees to begin with?

Mistletoe reproduces by seeds, just like any other plant, but has evolved special adaptations to keep its seeds from falling to the ground, where they would be unable to sprout and develop into a mature plant. If you squeeze open the whitish semi-translucent berries – by the way, don’t eat the fruit, as some species are poisonous – you’ll find that the seeds are incredibly sticky. They are covered with a glue-like substance called viscin, so they stick to whatever they fall on. They mostly fall on branches high up in trees because the berries are a favorite wintertime snack for birds, who then excrete the seeds where they roost.

Has mistletoe always been associated with wintertime rituals?

No, but it was revered by a variety of ancient cultures. One of the most famous legends concerns the Norse god Baldur, who was considered invincible until an unknown assailant finally killed a him with an arrow made from mistletoe. Separately, in an ancient Celtic ceremony, Druids would sacrifice two white bulls, then climb an oak tree to fetch some mistletoe to make an elixir that was said to cure infertility. This is believed to be the origin of mistletoe’s association with love and romance.

How did the Christmas connection come about?

Historians are fuzzy on the matter, but it seems that mistletoe’s association with fertility and ritual and wintertime slowly morphed into the modern Christmas tradition. It makes sense that mistletoe, with its evergreen foliage and attractive red berries, would be brought indoors as decoration during the barren winter months, just as people do with fir boughs and holly branches.

It is believed that by the 18th century, kissing under the mistletoe at Christmas time was a fairly widespread tradition, though the first clear historical reference comes from 1820 when Washington Irving, author of Sleepy Hollow and The Headless Horseman, wrote of the plant: “the mistletoe, with its white berries, hung up, to the imminent peril of all the pretty housemaids.”

Is it good for anything besides kissing and bird food?

Quite a bit, actually, especially in the realm of health. Historically, mistletoe has been used to treat not just infertility, but epilepsy, hypertension, arthritis and many other ailments. In modern times, it has gained a reputation as an anti-cancer herb, and while numerous studies have been conducted to look into this claim, there is little in the way of conclusive evidence regarding its efficacy. Still, pharmaceutical preparations of mistletoe are available in Switzerland, the Netherlands and the UK. In the US, mistletoe extract is sold by herbal suppliers, but the FDA has not approved it as a cancer treatment.

Where did the name come from?

The English word for the plant is derived from a defunct Anglo-Saxon dialect. Apparently, having noticed that mistletoe often sprouts from bird droppings on tree branches, the words for dung – “mistel” – and twig – “tan” – were conjoined, and the mashup “misteltan” evolved over time into “mistletoe.”

Can you farm it?

You would think this would be a losing proposition given that the plant eventually destroys its host, but there actually are people who farm mistletoe commercially. More often, though, the mistletoe you see at a florist in the winter is wild harvested. If you have access to wooded land, you can “plant” mistletoe seeds for your own picking come Christmas.

How do you grow it?

For best results, harvest seeds from mistletoe in the early spring, when the fruit is fully ripe. The tree harboring the mistletoe you collect seeds from should be the same species as the one on which you will grow your own. Cut a slit into a tender piece of bark as high in the canopy as you can safely reach, and deposit the seeds there, spacing them a few inches apart. The more seeds you plant the better, as the germination rate is low. There is no need for water or fertilizer. For protection from birds, tie a strip of burlap over the seeds. Have patience, as it takes at least five years for the plants to mature and produce berries.