Move Over Goats. Cattle are the New Fire Fighters in Town

On Californian vineyards and farms, grazing cattle are battling wildfires. 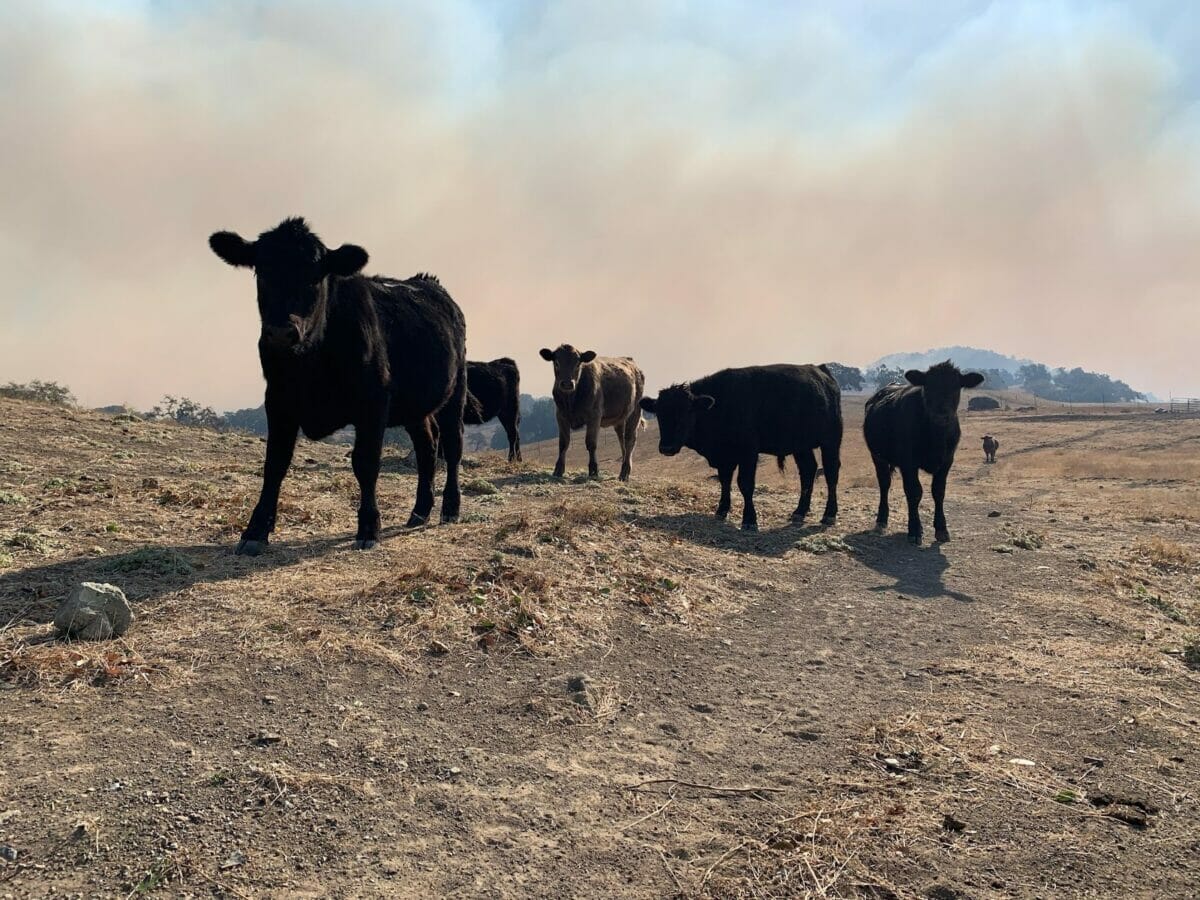 In recent years, the sight of flying sparks and fallen ash has become commonplace for Brent Young. He’s witnessed sweeping flames claim neighboring properties in Healdsburg, California within minutes. But when the agricultural director of Jordan Vineyard & Winery steps onto 1,000 acres that’s remained fully intact, it’s a testament to his roaming fire crew of Black Angus and Texas Longhorn-Corriente Longhorns.

“It’s unpredictable out here, and it happens so fast and you never know when a fire is going to hit,” he says. “There have been times where we’re clocking like 70-miles-an-hour fireballs in the area, but I know [these cows] are foundational for us and it feels like we’ve come away victorious for the time being.”

Nearly 10 years ago, when he was hired to manage the vineyard, Young spoke to the owners about measures they could take to reduce the spread of potential wildfires. As he was working to develop a beef program for the vineyard, he decided to test targeted grazing on strips of land between and surrounding the plots growing grapes. The idea behind cattle grazing as a tool of fire mitigation is that herds will chow down on any would-be fire fuel such as dried grasses, shrubs and timber, reducing a path for fire to travel down. Many goat herders have been enlisted to help mitigate wildfires in California, but cattle are a less talked-about option.

At Jordan Vineyard & Winery, Young checks on his cows weekly and monitors their grazing progress. He typically stations his herd in a designated area for a month or two, but he says the size of land and length of time vary based on a number of factors such as prior and current rainfall, nearby forest density and whether or not the cows are on a north or south slope. His herd has grown from five cattle to 50 over the last decade, which has allowed him to do targeted grazing on 600 acres year ’round. But given the success of the practice, he wants to add more cattle to chip away at an additional 200 acres within the next year.

Young isn’t the only one though. With wildfire season in California increasing in length, scope and severity, experts say there’s been a need and increased interest in rotational grazing as a fire mitigation tactic in and outside the agriculture community. And according to beef farmers and ranchers—who have historically been blamed for sucking water out of reservoirs and releasing methane into the atmosphere—it’s an opportunity, they say, to show how they can make a positive impact.

Stephanie Larson is the director of the University of California Cooperative Extension, Sonoma County and says she’s seen the demand soar for rotational grazing in recent years by about 25 percent. After the 2019 Kincade fire that torched more than 77,000 acres throughout Sonoma County, she says more landowners, farmers and regional park staff have been contacting her for guidance on either ramping up grazing measures or implementing the practice for the first time. In response, she helped create the online platform Match.Graze in October 2020, which connects landowners and businesses with herds for hire. But with more chatter around cattle “fire crews,” she thinks it has the potential to change widespread attitudes around cows as polluters.

“People want to know about the long-term, sustainable solutions and grazing is one of the more cost effective practices,” she said. “Yes, we know that cows are methane producers, but grazing helps with carbon sequestration and it helps with water capture. Without it we lose biodiversity, risk reverting back to invasive species and obviously have increased fire potential—it’s short-sighted to only focus on the methane piece.”

Research has shown the effectiveness of cattle grazers in reducing the amount of vulnerable land that can catch on fire. Preliminary results from one University of California study, released last year, showed that cattle grazing can remove an average of 596 pounds of fire fuel per acre on rangelands across California. This would keep fuels low enough for flames to stay below four feet, which, experts say, is a critical threshold that allows firefighters to safely access an area from the ground without heavy equipment.

Steven Pozzi, a sixth-generation cattle ranger from Petaluma, California, is only two years out of university. But he says that, as a young agriculturalist, he feels a responsibility to change negative attitudes around farming and climate change. Cattle grazing, he adds, is one way to do it. A few months ago, he joined Match.Graze and picked up a gig, letting his cows graze on 60 acres for a landowner in Sebastopol, California. Between his full-time job helping his family out on their ranch and working for a hay company, it’s something he wants to make more space for in his business model as he tries to build up the size of his herd.

“There’s a huge demand for it. … This is the future,” he says. “We have to keep the environment clean for the betterment of the entire world.”

Young feels the same way. Now is the time, he says, for farmers to step up and provide a resource that can be foundational to reducing or stopping a wildfire spread before it’s too late.

It can be any kind of cattle grazing managed to reduce fire hazard. It does not at all have to be rotational—in fact some types of rotational would keep cattle our for periods of time-not helpful. It has uses just like a number of other grazing systems including continuous. Depends on the location and goals. Quit sticking in unneeded and unhelpful words. Otherwise thank you for a much needed article. So important.

This seem to be something new. It has been done in the West for well over 100 years. Thru grazing permits. But our government has been shutting down grazing permits, and logging. Appreciate what you are doing, but please acknowledge those who came before you.’’

Related
Animals, Dairy, Meat, Opinion
Opinion: Feeding Insects to Cows Could Make Meat and Dairy More SustainableMerritt Drewery
Animals, Health
Rapid Tests Can Help Curb Deadly Infections in Livestock, TooShea Swenson
Plants
How a Desert Town Is Growing Its Way to Better HealthElizabeth Bellizzi
Animals
Mormon Crickets Swarm Oregon FarmsShea Swenson
wpDiscuz
We use cookies on our website to give you the most relevant experience by remembering your preferences and repeat visits. By clicking “Accept”, you consent to the use of ALL the cookies.
Cookie settings ACCEPT
Privacy & Cookies Policy