Corn residue left after harvest should be a great source of winter grazing. 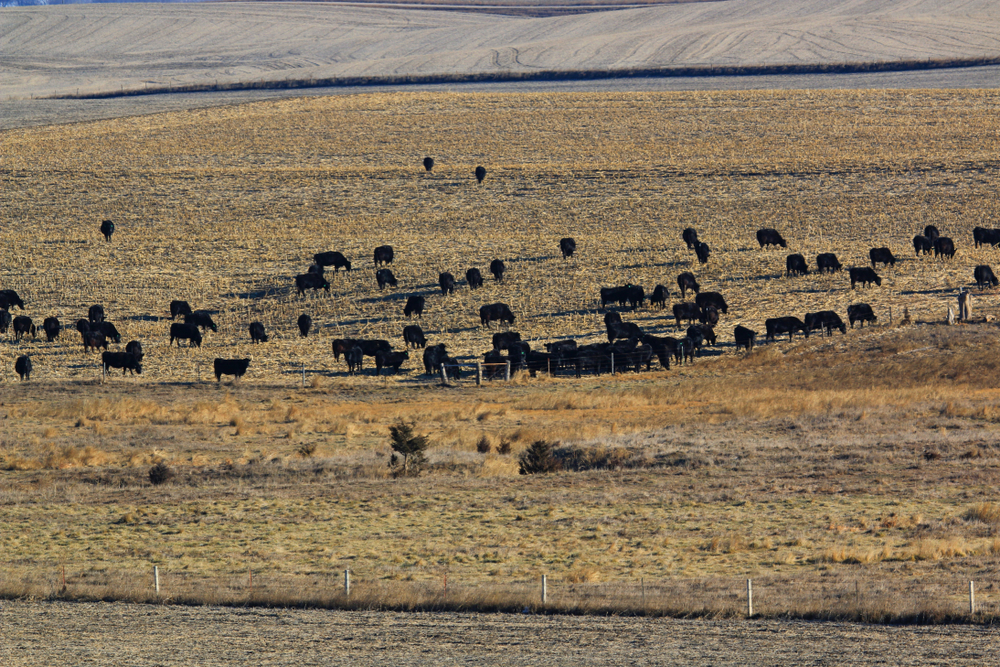 According to the University of Kentucky, each bushel of corn produced leaves about 50 pounds of…well, not corn.

This stuff is generally called corn residue, and it includes the stalk, leaves, cob, and some fallen ears of corn. Much of this residue is collected and disposed of; some farmers leave it to prevent erosion and inject some more nutrients into the soil over the winter. But there’s another option, and according to a new study, it’s a dramatically under-used one: let cattle graze this residue.

Morgan Grabau, at the American Society of Agronomy, took a closer look at the idea of cattle grazing on corn residue in a new study. This tactic is not commonly used; “Only 15 percent of the corn residue acres in the central US are grazed,” she says in the study’s press release. There are multiple reasons for that: some corn acreage isn’t close enough to cattle for it to make sense, for example. But there’s also a suspicion held by many farmers that it’s bad for yields, owing to the compaction the cattle will leave in the soil.

This turns out not to be the case, the study finds. The study looked at cattle grazing on corn residue both in winter, when the ground is very hard and resistant to compaction, and in spring, when rains have made it softer. They specifically examined acreage in a corn-soybean cycle, meaning soybeans would be planted following a corn crop.

The research found that there was some compaction, especially in the spring, but that farmers shouldn’t be concerned about it. The compaction was limited to exclusively the very top layer of the soil, and was not permanent. More importantly, the next crop of soybeans had, the press release says, “no problem” establishing seedlings in land the cattle had grazed.

Interestingly, the study did not find that there was no difference between land grazed by cattle and land not grazed by cattle—but the difference actually favors grazing. Yields actually increased in soybean fields that had a concentrated 15-day grazing period, which Grabau theorizes may have been due to the cattle removing excess corn residue. With less residue covering the ground, warmer spring weather could raise the temperature of the soil more efficiently, encouraging early growth.

The University of Kentucky has a little guide to grazing corn residue with cattle, saying that cattle are selective eaters and will opt for fallen ears of corn and tender leaves rather than the tough stalks. In addition, this corn residue isn’t tremendously nutritious, but some basic supplemental vitamins and minerals should even that out. And the benefits are obvious: less waste, cheap (or even free) feed for cattle during the winter when feed is at its priciest, and, apparently, improved yield for the next year’s soybean crop.

You know absolutely nothing about agriculture and it shows. So many things wrong with this article and others the author has written.

I come from a Horticultural background but can see holes in this article big enough to swallow a combine. It is a study and like John says it shows. Do proper research before writing any article.