This Local Solar-Popped Popcorn Was a Decade in the Making 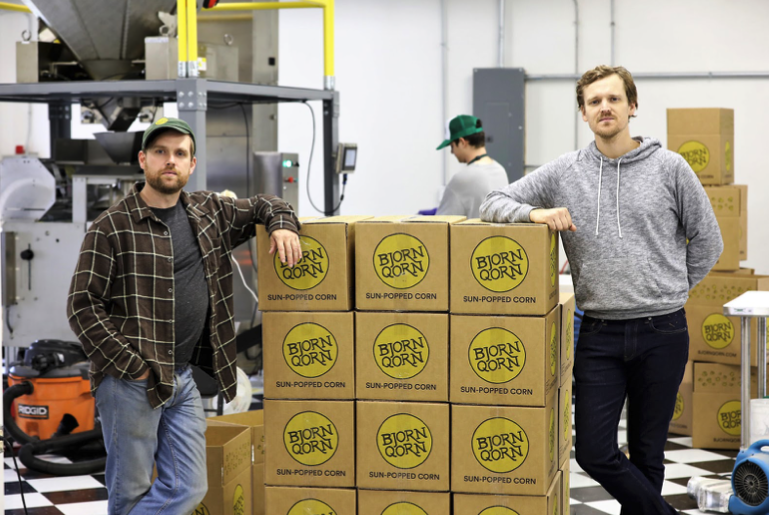 When Bjorn Quenemoen was a student at Bard College, he would host monthly popcorn parties. He would put up posters around campus, inviting everyone to his parties. At 10 p.m., on the appointed date, he would turn the lights down and put on some music.

Quenemoen would sell a handful of items, including Claussen pickles, Lucky Strike cigarettes and beer, but the real draw was his popcorn. He would pop it live, wearing a uniform (orange pants that his sister bought in Thailand, a maroon muscle shirt and a yellow headband). The recipe, heavy on nutritional yeast, comes from his family, who grew corn, among other crops, in Minnesota.

Quenemoen, now 38, never stopped making popcorn. “Before I graduated, I got the idea that I could turn this recipe into a business,” he says. And he did. The business — no longer a live event — is BjornQorn. The idea is so simple, it makes you kick yourself for not launching it first: non-GMO popcorn, solar popped and seasoned. Nothing more.

BjornQorn’s enormous solar kettles were designed by Quenemoen’s former college roommate, Jamie O’Shea. “We looked for a place where a farmer would let us build a crazy contraption,” says O’Shea. Thanks to a family connection, we’ve installed them on Kelder’s Farm in Kerhonkson, New York, across the street from the BjornQorn office — and not far from their old college campus. 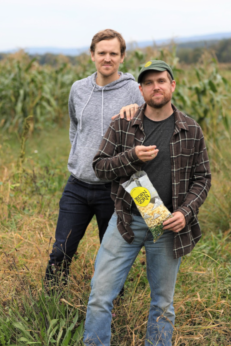 About 20 percent of their corn is grown on Kelder’s Farm, and the other 80 percent comes from Quenemoen’s family farm. When demand is high, they supplement with organic kernels. “When we don’t know the farmers, we buy organic,” says Quenemoen. “When we do, we work with noncertified lands.” He goes home to Minnesota to personally hand-sort the corn — the machinery available doesn’t meet his needs. “There isn’t a small-scale solution,” he says. “All of the grain needs to be sorted. There can be foreign materials, like husks and rocks, in there.”

Regardless of its origin, all of their corn is popped in the Hudson Valley kettles. Recently, the duo added a solar-electric facility to increase their production capacity. They also added two primary flavors to their product line: cloudy and spicy. Cloudy is the kernels that pop on non-sunny days, while spicy is quite hot.

On a rainy spring afternoon in their popcorn-scented office, Quenemoen and O’Shea reflect on their growth and try to imagine their future. It’s been a few years since O’Shea was able to work at BjornQorn full-time. And they’re past the point where Quenemoen has to stand on a ladder to work machinery and hand-deliver orders.

BjornQorn has made appearances in skits on The Late Show with Stephen Colbert and Saturday Night Live, and their popcorn is stocked in the staff pantries of both shows. Etsy staff members have even dressed up as bags of BjornQorn for Halloween. “They’re so crafty,” says Quenemoen.

They’re just as proud of selling at Hudson Valley stores and breweries as they are of their demand at Eataly in Boston, New York City and Los Angeles. And they’re embarking on a trial run at Whole Foods Market. “We aren’t sure yet about our quest for world domination,” jokes Quenemoen.

“There is still a lot of America left,” he says. “We’ll see how mainstream we can get this quirky popcorn to go.”

Related
Food & Drink
This Montreal Company Turns Juice Pulp Into FoodHarriette Halepis
Lifestyle
Zooey Deschanel’s Subscription Hydroponic Service Wants You to Grow 20% of Your...Dan Nosowitz
MTMF
This Farmer is Making Some of the Most Coveted Wines in AmericaJulia Clancy
Food & Drink
White Meat Just as Bad as Red Meat for Cholesterol, Finds New...Dan Nosowitz
wpDiscuz
We use cookies on our website to give you the most relevant experience by remembering your preferences and repeat visits. By clicking “Accept”, you consent to the use of ALL the cookies.
Cookie settings ACCEPT
Privacy & Cookies Policy