How to Grow a (Record-Setting?) Giant Pumpkin - Modern Farmer
Plants

How to Grow a (Record-Setting?) Giant Pumpkin

Ok, we know it's a little silly, but growing giant pumpkins is good, geeky fun. 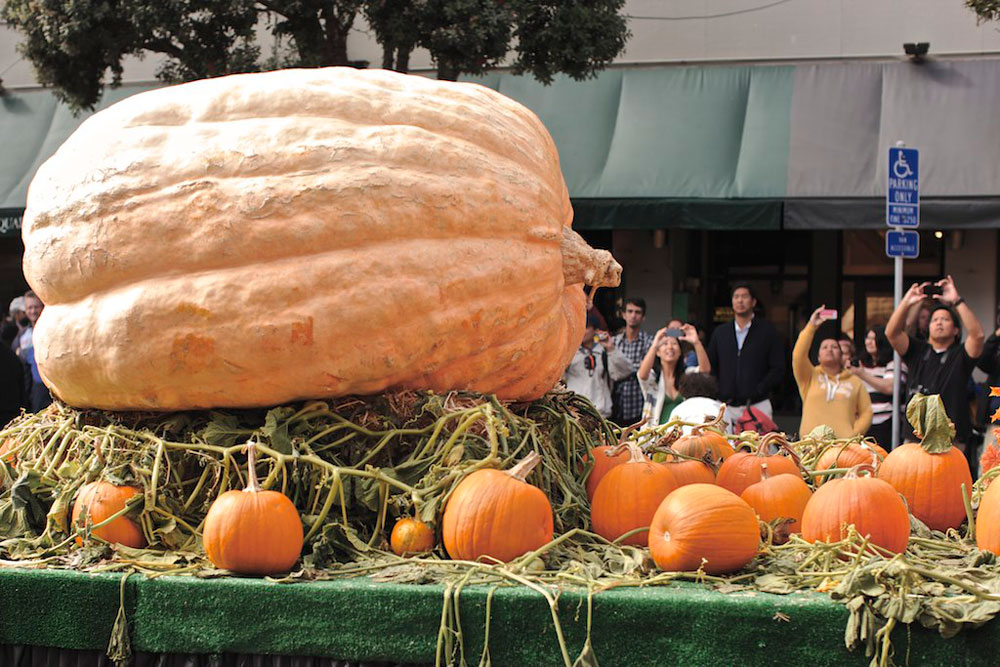 Every fall, thousands of backyard gardeners haul an enormous harvest to county and state fairs around the country. Forklifts and small cranes are required to lift the largest pumpkins onto the scales. Blue ribbon winners weigh as much as a compact car.

The bar gets higher almost every year – the 1,000-pound mark was first breached around the turn of the millennium; the current world-record pumpkin weighed in at 2,323.7 pounds, grown by a German gardener in 2014.

World champion growers have turned what was once an innocuous 4-H hobby into a professional pursuit, with big cash prizes instead of just blue ribbons, the seeds of world champion specimens fetching upwards of $1,000 each. But that shouldn’t deter you from seeing how big of a pumpkin you can grow just for the fun of it, not to mention the bragging rights you’ll accrue.

If you want a giant pumpkin next fall, don’t wait until spring to get ready, you have to start preparing the ground now. It’s a race to provide the longest possible growing season and funnel as much nutrients and water as possible into a single pumpkin, all while making sure there are no mishaps with pests, disease, or errant kids, pets, or livestock trampling the plant.

The first step in growing giant pumpkins is to obtain the right seed. One-thousand-plus pound pumpkins generally result from high-pedigree hybrid seeds, which circulate among the most serious growers and cost from $10 to $100 or more per seed. But virtually all giant pumpkins are descended from a variety called Dill’s Atlantic Giant, which is widely available from seed companies and sells for typical seed prices. Three hundred- to 500-pound specimens are routinely grown with this variety, but you still have to work at it – growing a giant pumpkin requires in-depth horticultural knowledge, a daily dose of TLC for the plant, and, well, a lot of luck.

If you can keep up the TLC regime until the first frost of fall (when the leaves will turn brown and die), you should end up with a massive pumpkin. At this point, clip the pumpkin from its stem and find a few friends to help you roll it onto a scale. Most importantly, don’t let all that food go to waste – the giant varieties are suitable for soups, pies, muffins, and any other recipe calling for pumpkin.

I want to do this, but sadly I’m too lazy.

Thank you for the instructions. I shared them with neighbors and started a big pumpkin contest 2 years ago. Started with 4 families, grew to 12 families our 2nd season in 2018. We celebrate with a fun judging contest followed by a neighborhood cookout. Looking for a recommendation: I have poor clay soil, highly alkaline. What’s the best fertilizer to add now while the ground is frozen and snow covered?

In 2019 we “accidentally” grew 2 very large pumpkins 100 lbs and 91 lbs. We sold them to a local garden center for a Fall festival giant pumpkin photo booth. I have now decided that that was freakin fun. So building up the soil and going to try that next year again.

My 9 year old Luke, is an avid pumpkin grower, he has grown some over 100 pounds, but more of them that are 50+ is there any books or information for him to read?? Also is there a seed share program, for someone young, just getting started?

Hi pumpkin peeps, so I have 3 plants (giant space) and each plant is doing the same thing… a baby pumpkin starts and then it slowly gets mushy and dies off. I am so worried I won’t have one because this keeps happening. Any advice? I water daily. I am worried it might be the soil. Can I dig it up and change the soil (like I would in a transplant) or is this too traumatic for the plant?

thank you for including me on your weekly publication.

This will be my first large pumpkin.

Hi—I have a Dills growing, finally got pollination in one, possibly two pumpkins. Do you let main vine grow on & on? I Plan on pruning tertiary vines, keeping all other female flowers picked off. I’m just not sure what pruning needs to be done past my chosen pumpkin. Thx