Important Question: What Sound Does An Alpaca Make? 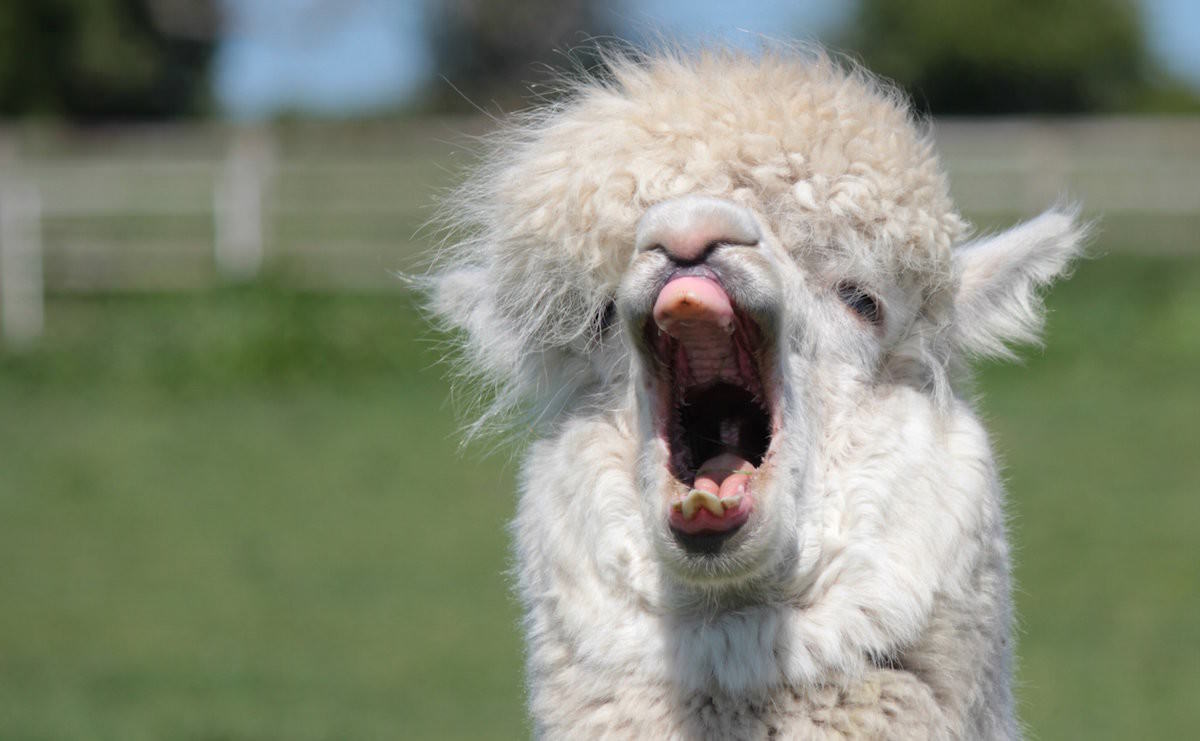 Alpacas may not have as recognizable a vocalization as a pig’s “oink” or a cow’s “moo,” but they’re capable of making a wide variety of noises to communicate all kinds of different things. Alpacas are herd animals, and make near-constant noise to communicate their presence to other members of their herd, as well as everything from comfort to discomfort to panic. (Thanks to Alpacas of Montana for their helpful blog post leading us to some of the more interesting noises.)

The most common and perhaps most unusual when compared with other livestock species is the hum, a sort of closed-mouth drone that alpacas make often. The hum, like a cat’s purr, is a bit of a mystery; it’s common, but can range in tone and urgency, and seems to convey all kinds of different emotions. Unlike a cat’s purr, though, the hum seems to, more often than not, indicate discomfort: anxiety, nervousness, stress, boredom, non-ideal temperature. There’s really no way to figure out exactly what an alpaca’s hum is trying to communicate, but a close relationship between a single alpaca and a single human can often allow the human to discern some subtleties to the hum, changes in pitch, or timbre that can indicate specific emotions.

Clucking or clicking, is a more unambiguous sound, made by, probably, creating suction on the soft palate with the tongue. (Some humans can do this, too; it’s a talent on the same level as wiggling your ears.) This is a friendly or submissive noise – those emotions are just about the same thing with a herd animal like the alpaca.

Another unambiguous one: the alarm call. This is a sort of donkey-like “hee-haw,” but higher pitched and less rusty-sounding than a donkey’s. It’s loud and obvious, meaning an alpaca has seen or heard or smelled something scary: a wolf, or a shadow, or anything else that it thinks might pose a threat.

The scream is related to the alarm call, but isn’t designed to alert the herd to a potential threat: this is simply a noise made when the alpaca is terrified. The one in the above video isn’t in any danger – it’s just being sheared by a pretty gentle owner – but the alpaca doesn’t know that, and is pretty freaked out. It’s a warbling, high-pitched shriek, much like the noise pretty much every mammal makes when scared.

And now for the last major category of alpaca noise, and the most fun: the orgle. Male alpacas make this noise while mating or attempting to mate. It’s a truly bizarre sound, like a rusty trumpeter attempting to play a solo into a swimming pool. It’s unmistakable, which can be useful for breeders and probably sort of annoying for anyone else.

So there you have it! That’s what an alpaca sounds like.

Hello We recently purchased two potty calves. One of our neutered male alpaca is very interested in the new arrivals, and is making a noise I can only describe as similar to a duck. Can anyone please shed light on what he is trying to convey

what is a good onomatopoeia for an alpaca for a story