How Farmers Protest Around the Globe - Modern Farmer
Lifestyle

How Farmers Protest Around the Globe

When a farmer gets mad, watch out. 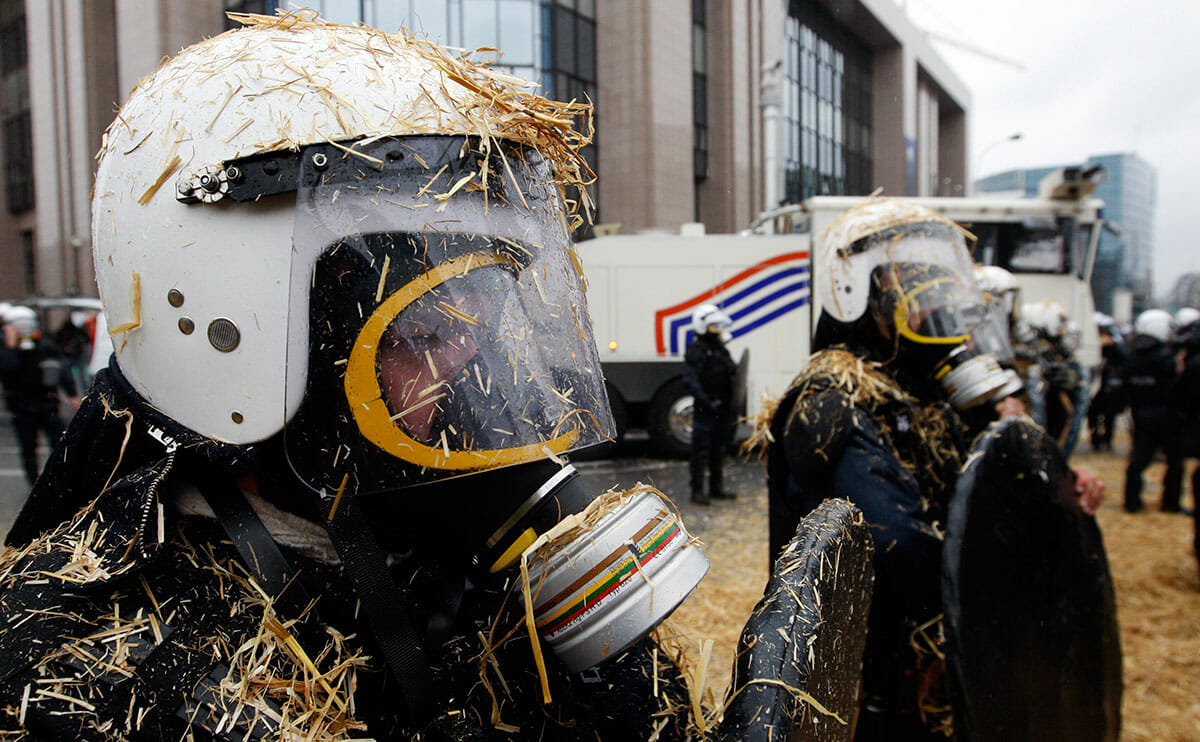 A farmer can put on a protest like no other. Around the world, farmers who are upset over everything from low milk prices to grazing rights have made headlines, using all the tools in their formidable arsenal – cute animals, fresh produce and large, out-of-place equipment – to make Internet gold. The crazy antics farmers from these six nations have thought up to make the government and the public pay attention could put any PR firm to shame.

Dairy farmers rolled 50 tractors into Somerset in August 2014 to protest low milk prices. A group called Farmers for Action organized this blockade of a distribution center for Morrisons, the fourth largest supermarket chain in the UK. Repeated price cuts were so bad that many of the UK’s dairy farmers were operating at a loss. As of their last update, Farmers for Action continues to protest falling prices at supermarkets and processing plants. They even recorded a catchy song, “#SOS Dairy,” which has an uncanny knack for getting stuck in your head.

In another cow-based protest, Bavarian farmer Johann Huber diapered his cow in reaction to an EU regulation that he believed would prevent him from fertilizing his land using manure. When Modern Farmer reported on Huber’s sheet-nappied cow in October, it was discovered that the law actually allowed for cow pies after all. A protest without a cause that still goes viral? Now that’s what we call media savvy.

How would you feel if your morning commute to Times Square was interrupted by a herd of 2,000 sheep? Earlier last month, Spanish shepherds drove their sheep through the streets of Madrid, including Puerta del Sol, the equivalent of Times Square or London’s Piccadilly Circus. These shepherds were protesting the loss of ancient grazing paths as creeping urbanization continues to take more and more once-rural land. Though the protest probably won’t stop the growth of Spanish cities, it reminded urban residents ”“ however briefly ”“ that there are real people (and sheep) behind their merino sweaters.

Talk about sour milk. Angry about low milk prices, dairy farmers sprayed thousands of gallons of the stuff from high-pressure hoses at the European Parliament in Brussels. The protest became a multi-day affair as a tractor blockade came to Brussels’ Cinquantenaire Square. Two years before, farmers had burned work clothes and boots in front of the Parliament building, saving some rubber boots to throw at police officers. In 2009, farmers had covered the streets and police in both hay and milk. The tactics certainly got people’s attention although, judging by the 2009-2012 timeline of these protests, farmers are having trouble getting the government on their side.

The most dangerous protest on this list, Japanese rancher Masami Yoshizawa returned to his radioactive land in defiance of the government’s handling of the Fukushima nuclear disaster in 2011. Ranches throughout the area were abandoned after the meltdown, their cattle under a death sentence. Yoshizawa returned soon after and began feeding the cows still in the area. Ultimately he moved back into his ranch to pursue the work full-time, relying on donations for food. In June, Yoshizawa and another rancher attempted to get the government to act by driving one of their cows into Tokyo. Even if Japan itself won’t change its stance on Fukushima, his work is an ongoing reminder to the rest of the world that people (and animals) continue to be affected by the disaster three years later.

The French can teach you everything you’ve ever wanted to know about protesting with style. They’ve dumped literal tons of manure (about 100) on government buildings and another 60 tons of fruits and vegetables into the streets of Paris. Farmers have thrown apples at riot police and done drive-by eggings. They’ve brought sheep to the Louvre and driven other farm animals throughout Paris. In the largest of these protests, farmers transformed the Champs Elysees into a rural wonderland complete with grass, plants and grazing animals. French farmers are the undisputed champions of farmer protests. (Maybe there’s something in the croissants?)