Send in the Sheep

If a French farmer is angry, you're probably going to hear about it. And he's gonna bring his sheep with him. 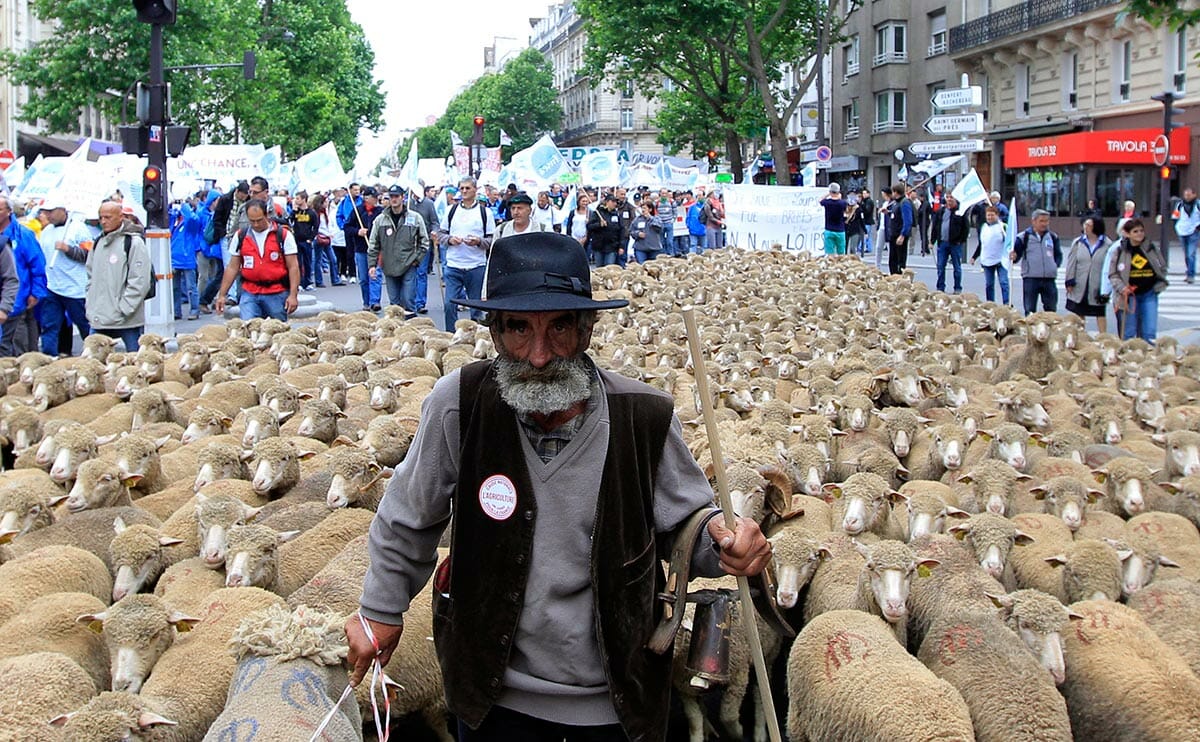 When the EU announced an end to dairy production quotas, French farmers dumped almost one million gallons of milk next to a monastery. In response to rising fuel costs, they blockaded ports and refineries with heavy farm machinery. After a drop in food prices, they torched hundreds of hay bales in Paris. They’ve driven 7000 tractors down the city streets, battled riot police with shopping carts full of fruit, and planted wheat and grapevines on the Champs Elysées.

Each action is a fresh bit of guerrilla theater; it’s like the farmers are afraid you’ll get bored. But there’s one tactic protesters keep returning to, a crowd-pleaser that never gets old. Again and again, in response to many a perceived injustice, French farmers keep bringing their sheep to Paris. Here’s why:

1. Sheep food is too expensive.

Just this week, French livestock farmers got peeved at rising feed costs, claiming it causes them to earn four times less than their crop-growing counterparts. Naturally, they trucked in thousands of sheep and marched them through Paris. This protest also featured cows and pigs, but the sheep stole all the headlines. While in town, some visiting livestock were treated to a stylish urban haircut.

2. A new airport is unpopular.

To protest a proposed airport for the French city of Nantes, a “commando” sheep pen was erected near the Eiffel Tower. A small herd was let loose in the pen, and a tractor was driven in to maximize photo ops. These stocky little sheep wore protest shirts (emblazoned with an airplane and “Aeroport Non!”) and spent the day hanging with tourists. But if you can’t see the connection between sheep in Paris and an airport hundreds of miles away, don’t worry about it! Construction on the new airport will begin next year.

In 2008, another 100 sheep were brought to the Eiffel Tower; this time the protest was actually about sheep. The French farm aid package had just been announced and sheep breeders weren’t happy with their cut. One protesting farmer suffered from a bout of high drama, pointing to a sheep and saying “Look here, film this one, it’s the last one, soon you won’t see any, they are dying, farmers are dying, everyone will vanish…” As of press time, no one has vanished.

Authorities detained at least four sheep in this splashy protest at the Paris commodities exchange. The action coincided with a summit of G20 agriculture ministers, intended to address the world’s impending food crisis. Protesters were expressing a lack of faith in the G20’s leadership, and a general dislike of commodities speculation. Sheep were but pawns in the battle.

Technically, this is less of a protest and more of a day job (don’t get jealous, goats.) Four incredibly good-looking Ouessant sheep were brought to Paris this April as part of an experiment. If they are effective at keeping grass short, they will serve as models for a larger city landscaping program. When asked if they enjoyed their new duties, the sheep said “Not baaaa-d.”