Give a Cow Its Due - Modern Farmer
Animals, Plants

Give a Cow Its Due

Physically, intellectually and emotionally, cattle are more complex than we give them credit for being, and they are far less placid as they seem. 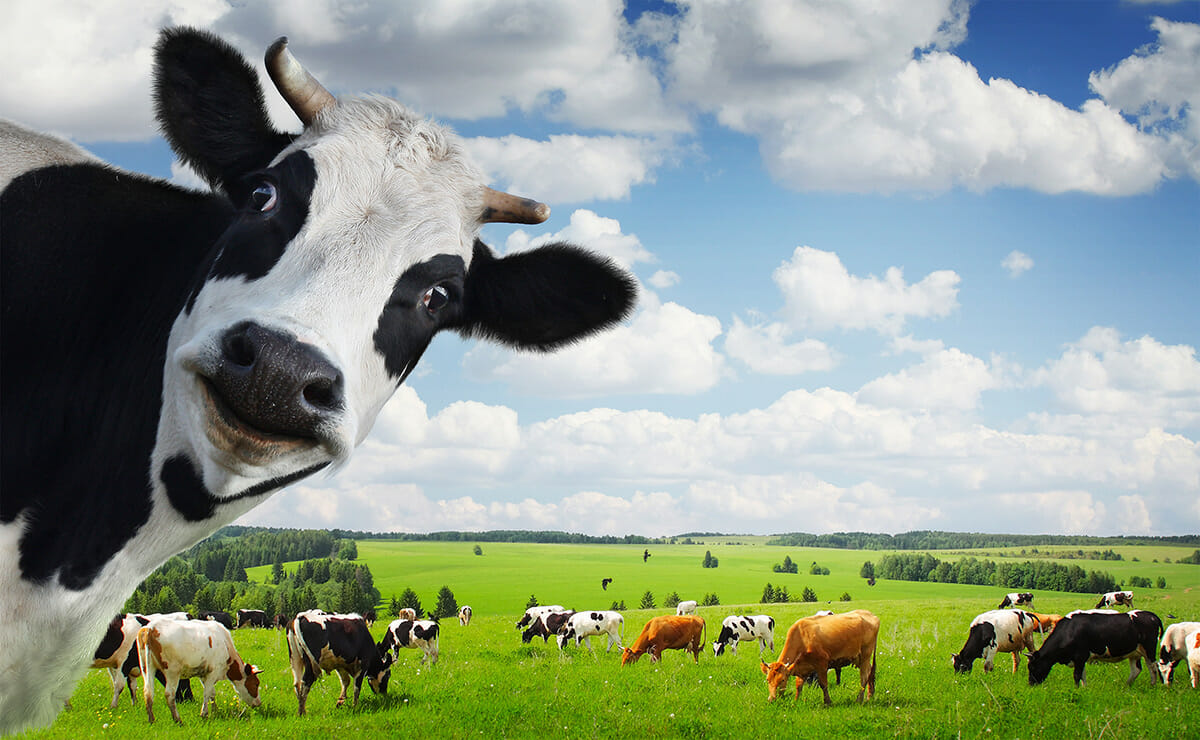 When people call each other cows, they’re offering anything but praise. It’s understandable. Few people have the chance or inclination to get to know one up close and personal. If you judge a cow by looks alone, it’s easy to think of them as dense, dull, creatures with no inner lives and not much in the way of outer ones. Inspect a field of cows, and you’ll see bunches of large animals standing around, chewing mouthfuls of cud, and gazing at nothing ”“ hardly the philosophers of the field.

But physically, intellectually and emotionally, cattle are far more complex than we give them credit for — not to mention far less placid than they seem. Given a quarter of a chance, the average cow will demand that you show her some respect.

Consider some superhero physical attributes. Cattle don’t need to glance back to see who’s sneaking up on them: Their wide-set eyes give them almost panoramic vision. A cow’s only blind spots are directly behind her head and right in front of her nose. She has binocular vision for 25 to 50 degrees. Her vertical vision covers only 60 degrees (Ours is 140.), but nobody’s going to sneak up on her in a dark alley or an open field.

A cow may not be able to spot what’s at the tip of her nose, but those big damp nostrils are remarkably keen. Cattle are more sensitive to scent than a professional at the priciest perfumery. (Please note: cow cologne). That sense works at a long distance; cattle can smell odors five miles away.

Just like high school students, herds have cliques. It isn’t about who has the prettiest spots, or even about who’s the strongest or smartest. What matters is compatibility.

Cattle also excel at audio. A human who hears something can usually pinpoint its location to within 5 degrees. Cattle can narrow it down to within 30 degrees. As a prey species, they evolved to keep both ears on the horizon. Evidence has suggested that cows can also use very low-frequency sounds to communicate with each other. Cattle also like music — if you work with cattle, play them a sonata or some classic jazz. One thing they don’t like? Human voices. A 2006 study explored what noise cause cattle’s stress levels to rise.
Cows weren’t phased by the sound of scientists banging steel rods on metal railings, but human voices made cows’ stress levels rise. So shut your trap, and turn up the radio.

Beyond their physical skills, cows also have complicated emotional lives.

Being in a settled herd is kind of like being in a high school filled with cliques. Cows, too, have a hierarchy, and athletic ability is a factor. Dominance is determined through trial by combat and the highest-ranking cow is the strongest. Put a new animal in the herd, and she’ll have to go through at least one test of strength. The rest of the herd reestablishes its order around the results.

Cows also appreciate a little respect. A Newcastle University study revealed that cows that are called by name and have their personalities taken into account, are happier animals. From a dairy farmer’s perspective, respect is profitable: Happier cows give more milk.

Far from being simple lumps of muscle and cud, cattle are innately curious. A 2004 Cambridge University study showed that cows enjoy solving problems, completing challenges such as figuring out which panel hides a food reward. Cattle even celebrate their successes, umping and bucking with excitement when a task is completed.

It’s good to know a little cow psychology when dealing with an animal that weighs up to 1,800 pounds, and has four solid hooves. Eiko Volkovich, of Skagit River Ranch in Washington State, says, “I don’t own a cattle prod. I’ve never owned a cattle prod. When I want my cows, I go out to the pasture and I whistle, and they come.”

1 Comment
Most Voted
Newest Oldest
Inline Feedbacks
View all comments
For All the Cows: From the Suburban Escapee - Homesteady

[…] Photo Credit at the top of the post to The Modern Farmer. Click to read his take on the inner life of cows. […]