The Rye Bread You Didn’t Know About

While many Americans struggle to differentiate rye bread from pumpernickel, the Nordic countries are eating hundreds of rich varieties of rye. 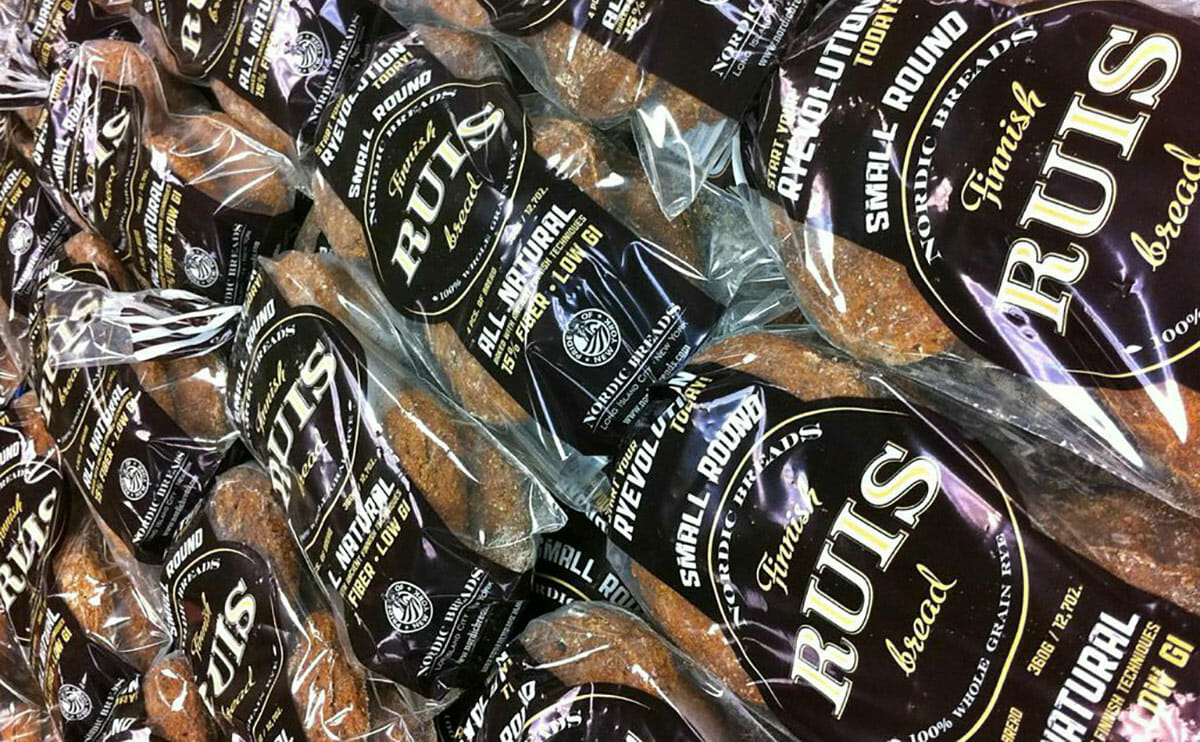 If you’ve only eaten the beige, caraway seed studded, ‘Jewish rye’ (which incidentally is mostly wheat), you’ve been misled. The Nordic countries and those along the 3,500-mile long region that stretches from Germany to Russian known as the ‘rye belt,’ are casually eating hundreds of rich varieties of rye bread while many Americans struggle to differentiate rye from pumpernickel. Rye bread can be dense and dark with a delicate sweetness, or a heady tang that lends itself to immense versatility. Yet while artisan loaves of wheat breads, French boules, Jewish challahs, and Italian ciabattas, have sprung up around the country, good rye bread remains elusive ”“ though not from lack of deliciousness.

Simo Kuusito is the owner of Nordic Breads, a New York City based bakery that sells a 100 percent rye bread in the tradition of his native Finland online, and at regional farmers markets. “Someone who has never seen the bread is [initially] very suspicious, [but] they take a bite and then they go ‘this is good.’ This is a new flavor they’ve never experienced before,” he says.

Rye bread can be dense, and dark with a delicate sweetness, or a heady tang that lends itself to immense versatility.

Rye bread wasn’t always so foreign; before WWII, the United States had a rich rye culture. Rye’s tolerance to cool, damp, wet conditions and marginal soils made it a natural choice for the early English and Danish settlers who brought the grain with them from Europe. Colonial Americans commonly mixed rye with cornmeal to create “rye and Indian” bread, a dense and long-lasting loaf. George Washington made a fortune distilling rye into whiskey at his Mount Vernon estate.

It was German immigrants, and later Jewish and Russian immigrants, however, that really showed Americans the possibilities of rye bread. The word delicatessen comes from German, meaning “delicacies” and the old delicatessens cured their own meats, crafted brine to create the best pickles and baked rye bread. Eugene Anderson, Professor of Anthropology, Emeritus, at the University of California, Riverside, and author of Everyone Eats: Understanding Food and Culture, says nostalgically, “Everyone my age remembers the old rye breads. It was the best bread of my life, way better than anything since; artisanal breads don’t touch it.”

Changing demographics, and the industrialization of agriculture led to rye bread’s decline. “Everything culturally German was hated and dropped during the two world wars.” says Anderson. “German delicatessens and German rye breads were much less popular. A similar thing happened with Russia during the Cold War. They worked hard to Americanize so they stopped doing anything with rye bread.”

This amnesia was nearly complete.

“I was in Kent, Connecticut,” says Glen Roberts, the founder of Anson Mills, a South Carolina-based company that grows and mills heirloom grains, “standing in a parking lot talking to a group of bakers and they were like, ‘We’d like to do local bread here, but we don’t have any local grain.’ They were standing in an 80-acre field of abruzzi rye.”

Rye is so easy to grow that Washington State classifies it as a Class C noxious weed because it often emerges in fields where it has not been planted. Its true virtue, however, lies in its ability to be grown on marginal land. On good soil, however, rye’s yield is only half that of wheat. In the post-WWII era where monoculture yields were agriculture’s primary focus ”“ rye failed to shine.

“Rye was saved,” says Roberts, “by the introduction of the Wren Abruzzi rye cultivar which increased yields but bred the flavor out of rye bread.”

A generation raised on Wonder Bread might argue that industrialization also bred the flavor out of wheat bread, but wheat bread is at least easy to make.

“It’s a different technique making rye bread,” says Simo. “It’s a long process, low fermentation, since there’s very little gluten in rye, and it’s a different gluten in the wheat so the bread isn’t rising like wheat bread; the only gluten development is from the starch’s baking process in certain temperatures.”

Rye’s tolerance to cool, damp, wet conditions and marginal soils made it a natural choice for early English and Danish settlers.

Echoes Hrom, who co-owns with her husband Café Loki, a traditional foods restaurant in Iceland’s capital, Reykjavik, says, “RÁºgbrauÁ° was originally baked in the ground for twelve hours using geothermal steams. We use the oven now at low temperatures and bake it for many hours. Because we have cheap energy, we can have the oven on all night. In some countries people can’t think about baking bread the whole night because it’s too expensive.”

“It’s a technique to make the bread, it takes a long time to learn,” adds Simo. Despite being a classically trained chef, Simo learned how to make rye bread from older bakers who had been baking the bread since the ’60s. For Hrom it’s a family affair: “My husband and his parents have been baking bread for many years. As they got older and couldn’t bake bread anymore, my husband decided to learn from them how to bake bread to fulfill his family’s purpose.”

“You can read all you want in the books and have perfect recipes,” says Simo, “but if you don’t see someone making it, it would be very difficult to make it perfectly.”

And one might argue: That’s the best technique to learn to appreciate the bread.