Why You Should Be Eating More Purple Cauliflower - Modern Farmer
Food & Drink, Plants

Why You Should Be Eating More Purple Cauliflower

This purple, colorful cauliflower isn't just a pretty face - it's also a superfood. 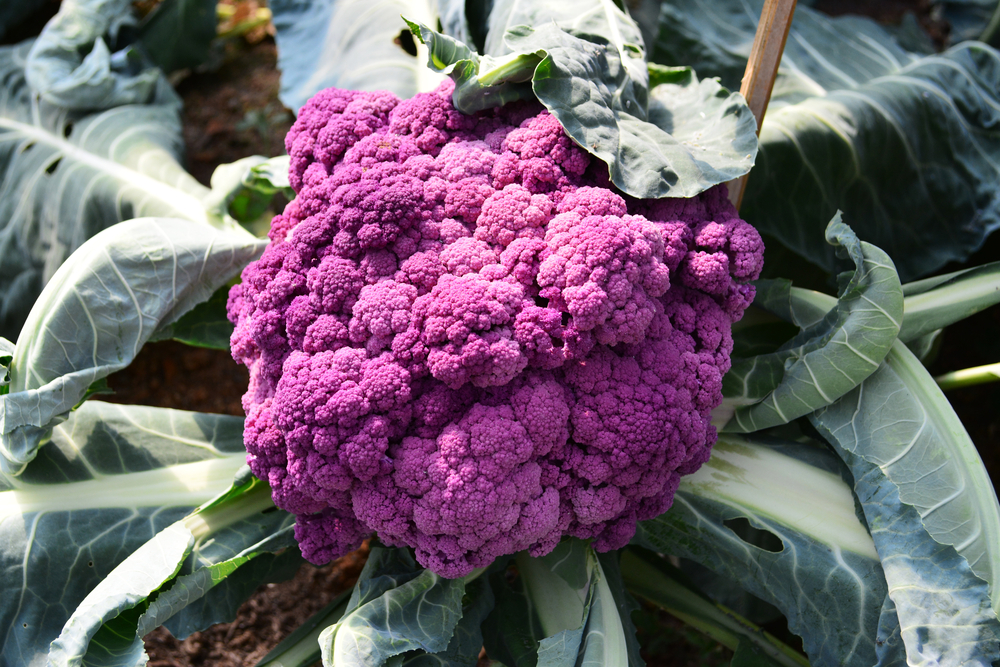 Introducing the newest health food slogan (you heard it here first), a head a day keeps the doctor away. Well, at least a head of the purple stuff. You know, the freakishly purple cauliflower usually found snuggled up next to its pale brethren at your local market stall. At first glance, these unusual vegetables look like a GMO-Frankenstein experiment gone wrong, or an odd marketing ploy. (Remember purple ketchup?) In reality its simply a different variety of the common white cauliflower, only packed with anthocyanin, the same antioxidant found in red wine.

Cauliflower, part of the Brassicaceae family – which includes broccoli, cabbage, Brussels sprouts and kale – is a super-food in its own right, packed with dietary fiber, folate and vitamin C. Over the years cauliflower has been bred in such a way that the head, or curd, develops without any of the natural pigments that would usually tint the bulbous head purple, green or orange.

Recently these colorful varieties have found their way back into the mainstream food market, each offering a unique pigment, making this healthy choice just a bit more interesting.

In reality its simply a different variety of the common white cauliflower, only packed with anthocyanin, the same antioxidant found in red wine.

Beta-carotene, the same compound that gives carrots (and those who eat too many of them) their rich orange color, is responsible for; you guessed it, orange cauliflower. Meanwhile, chlorophyll, the key biomolecule in photosynthesis, gives green cauliflower its Hulk-ish hue.

Riddle says not only do these pigments jazz up this otherwise drab vegetable but also they offer the body some interesting benefits.

“Beta-carotene, when consumed, metabolizes into vitamin A, which plays an important role in ocular heath. Chlorophyll is an antioxidant and acts as a sort of internal deodorant,” he says.

Although you can’t go wrong with any of the cauliflowers (they may even fight cancer), why not toss a purple head in your basket next time your at the market? You’ll appreciate it when, after a long day at the office, you can come home and enjoy a big bowl of the purple stuff – because you know, you earned it.