One man's lifelong obsession with creating art from produce stickers. 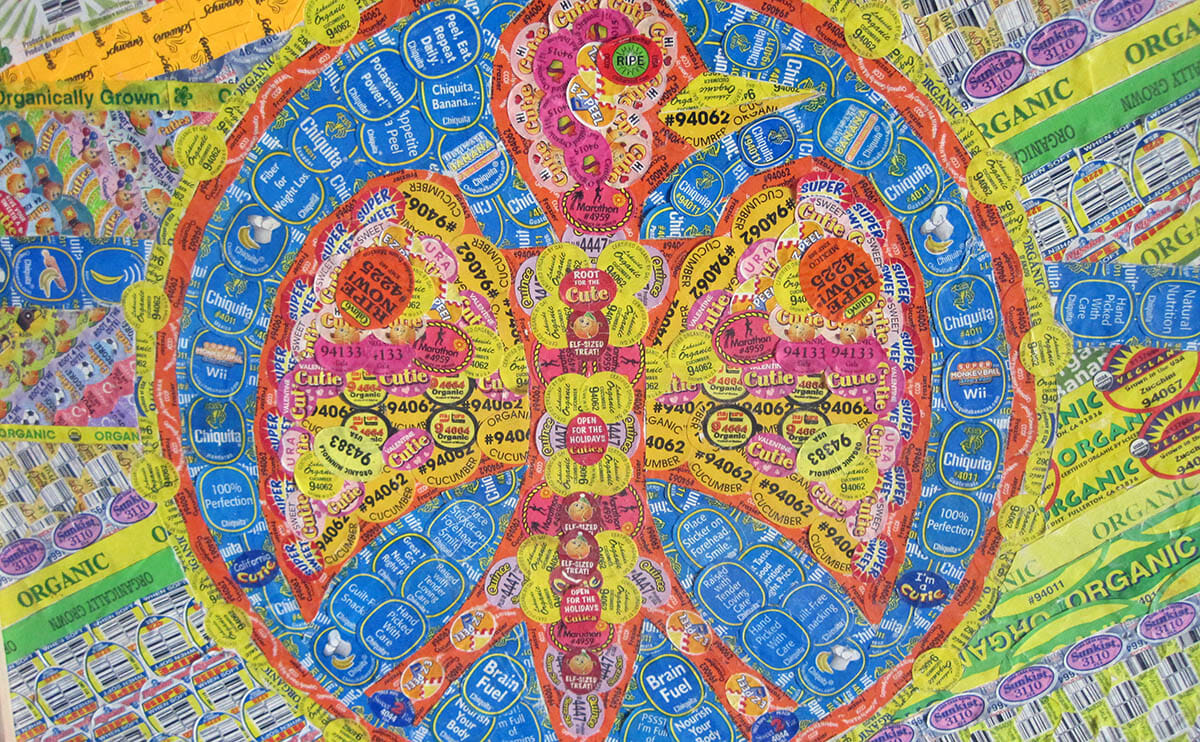 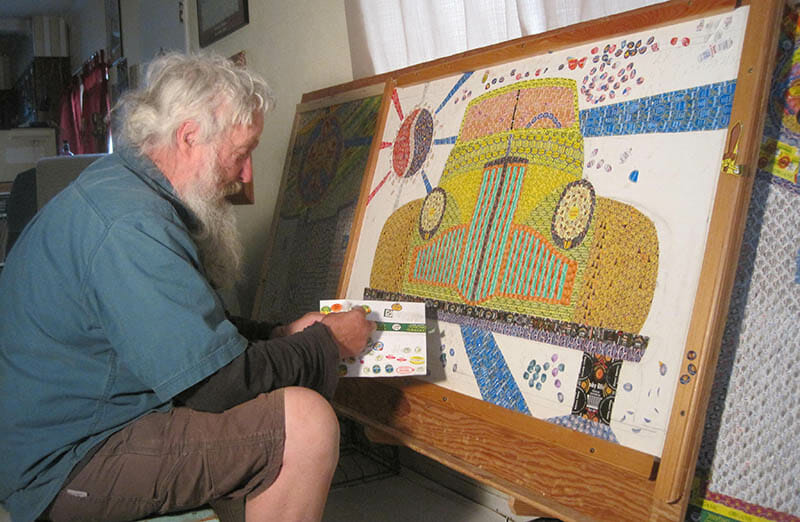 Now, he prefers dry fruit. Fans mail the stickers from their fresh veggies to him on pieces of wax paper. The sheets lay on his lap in the morning when he fills the outline of a Frank Zappa album cover imitation or, most recently, an old Studebaker truck.

Since picking up the hobby as a high schooler in Oshkosh, Wisconsin, he has noticed a few changes in the little pieces of paper or plastic stuck to fruits and vegetables. The adhesives on the back of each sticker vary, so he adds a touch of Elmer’s before adding each on to his collage. He also isn’t quite sure what to do as identification numbers and bar codes make up more and more of each sticker, crowding out some of his needed colors.

That attention to tactile realities complements his suspicions of anything high tech. When I had a chance to see Barry at work in his home in Erie, Colorado, he explained me to his roommate as, “some kind of web journalist. Doesn’t even use real ink!”

He sells prints the old-fashioned ways: off the walls of local coffee shops, from art festivals or over the phone. He has a website, but mainly sees it as a vehicle to get people to call.

And why does he toil on a single canvas, cutting, placing and pressing for years at a time? He says it isn’t environmentalism, as some have assumed in the past.

“If you took all these stickers and wadded them up into a ball it wouldn’t even fill a dumpster,” he says.

Money is also out of the question. He estimates the cost of his original pieces at about $2 per sticker, or what he think would be the total cost of the fruit. But as one work can take over two years, it doesn’t add up to much for the former carpenter and roofer.

Rather, it’s the pointlessness of the pointillism that intrigues him.

His own simple tagline for his portfolio: “It’s so stupid, it’s neat.” 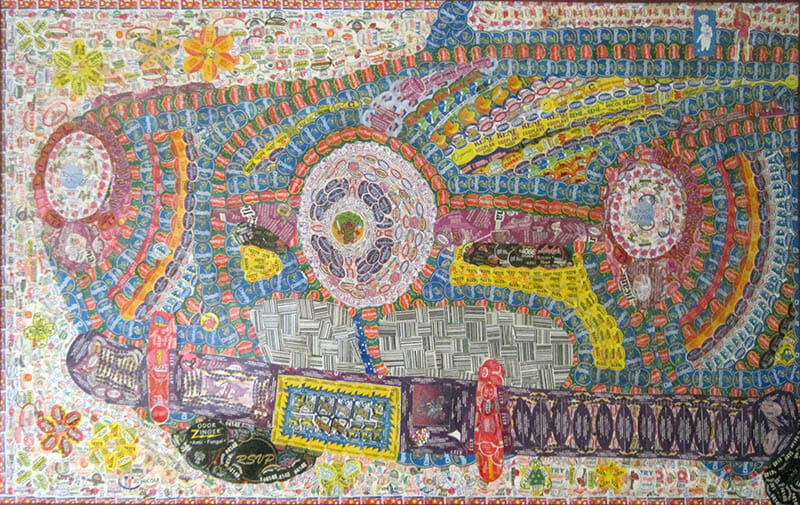 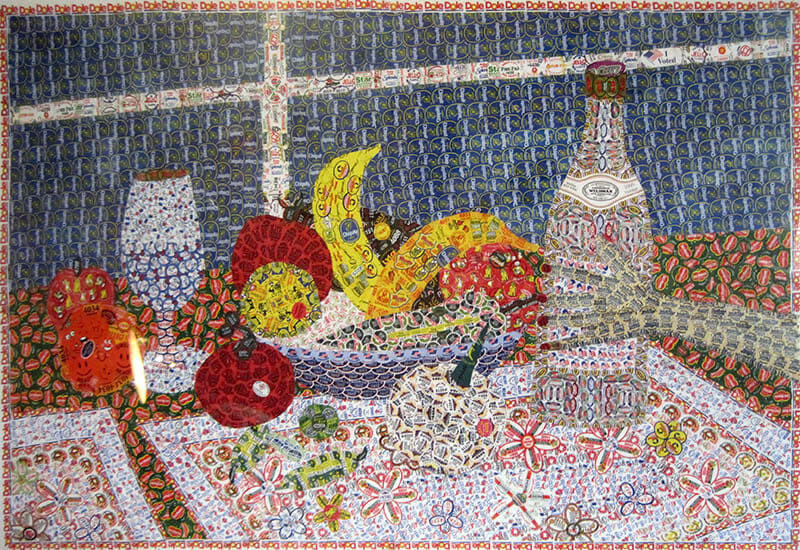 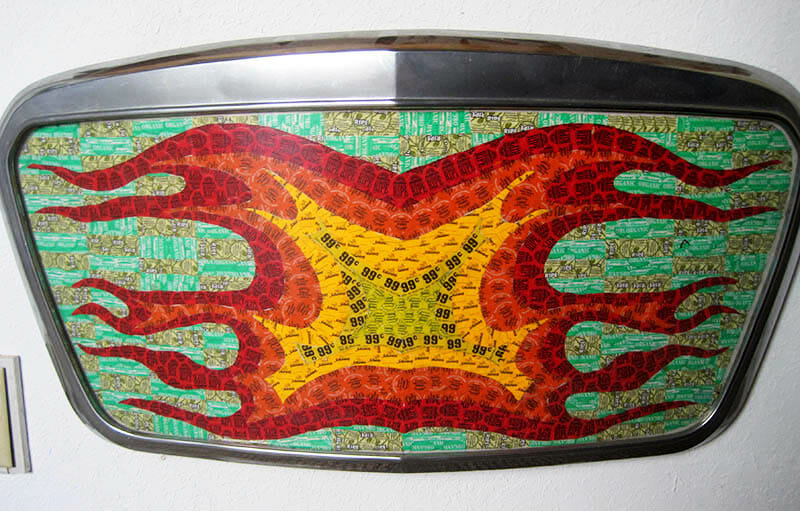 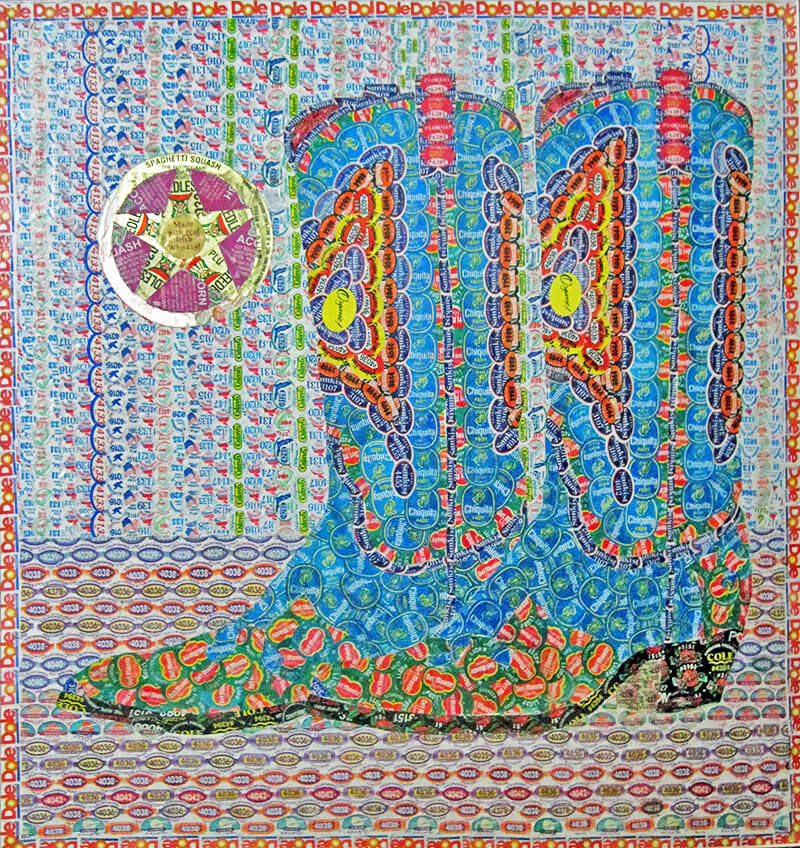 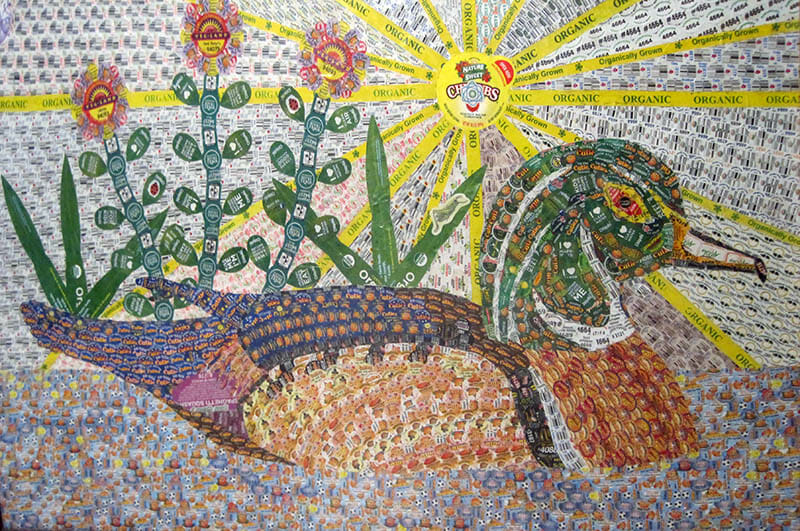 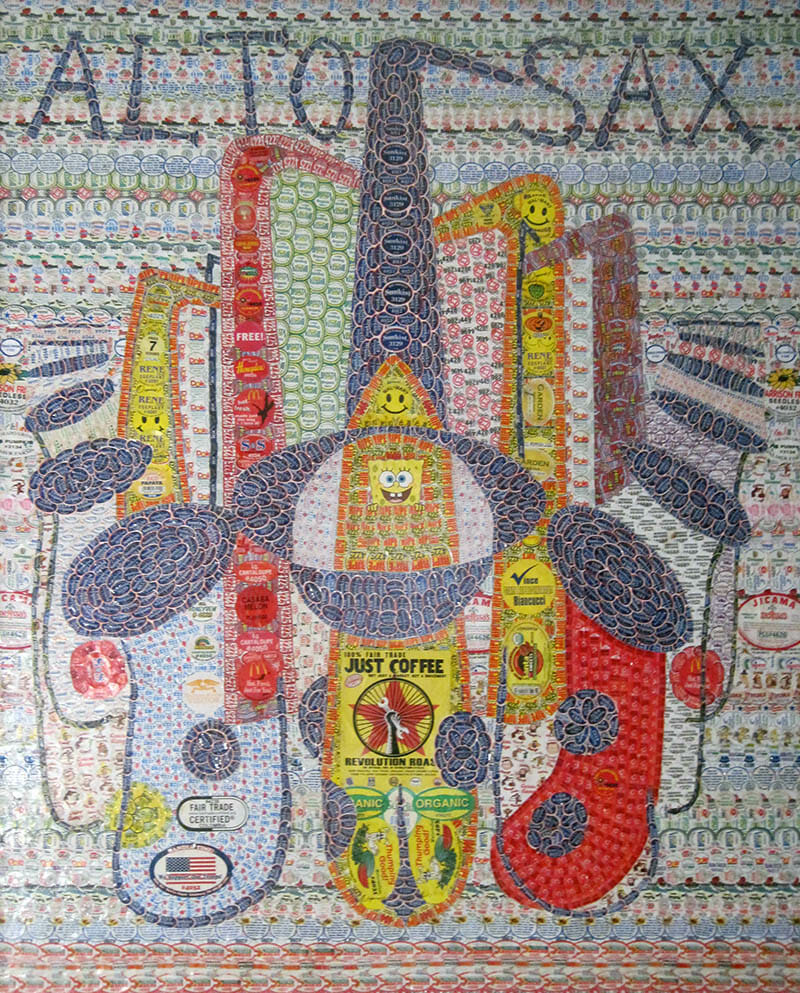 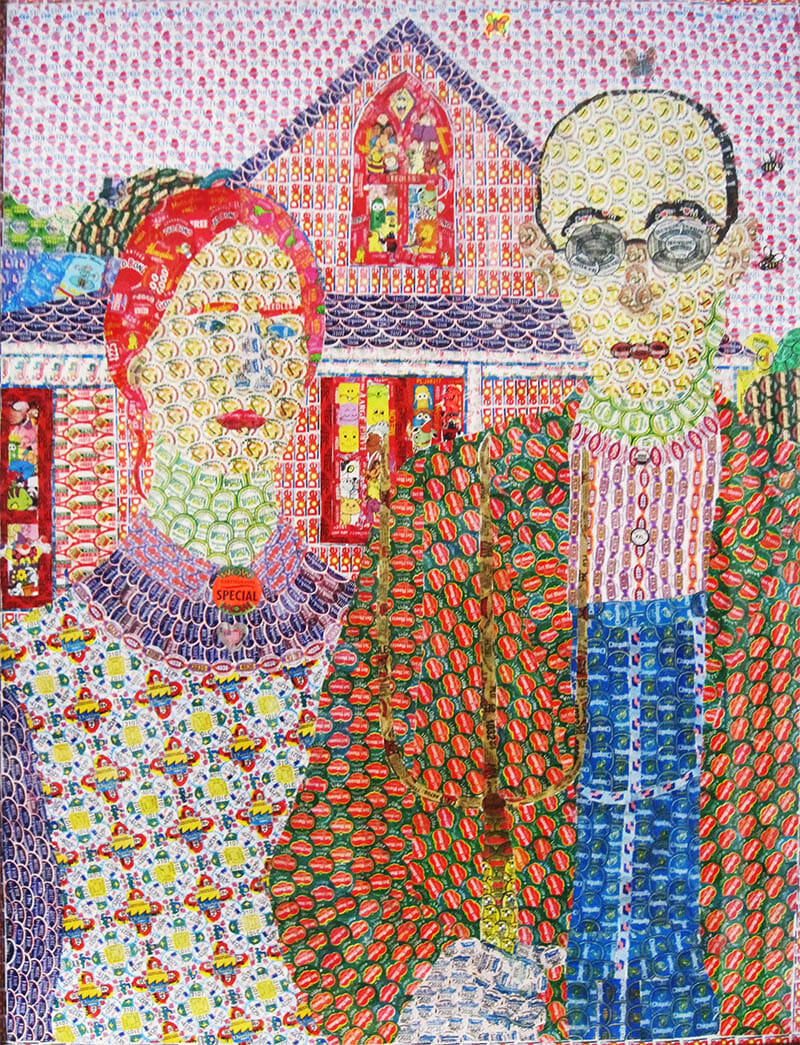 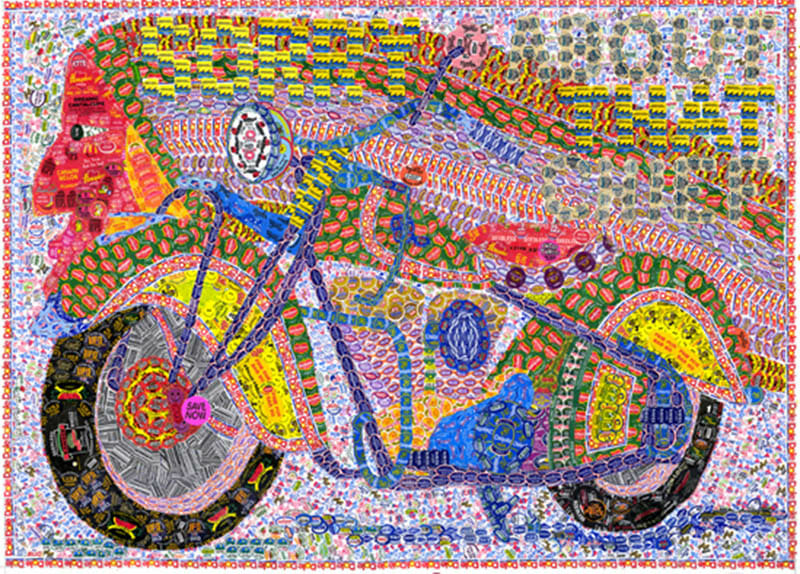 All images copyright of Barry Snyder