American bartenders once used ice harvested from frozen ponds in their drinks. Today bartenders are carving their own way. 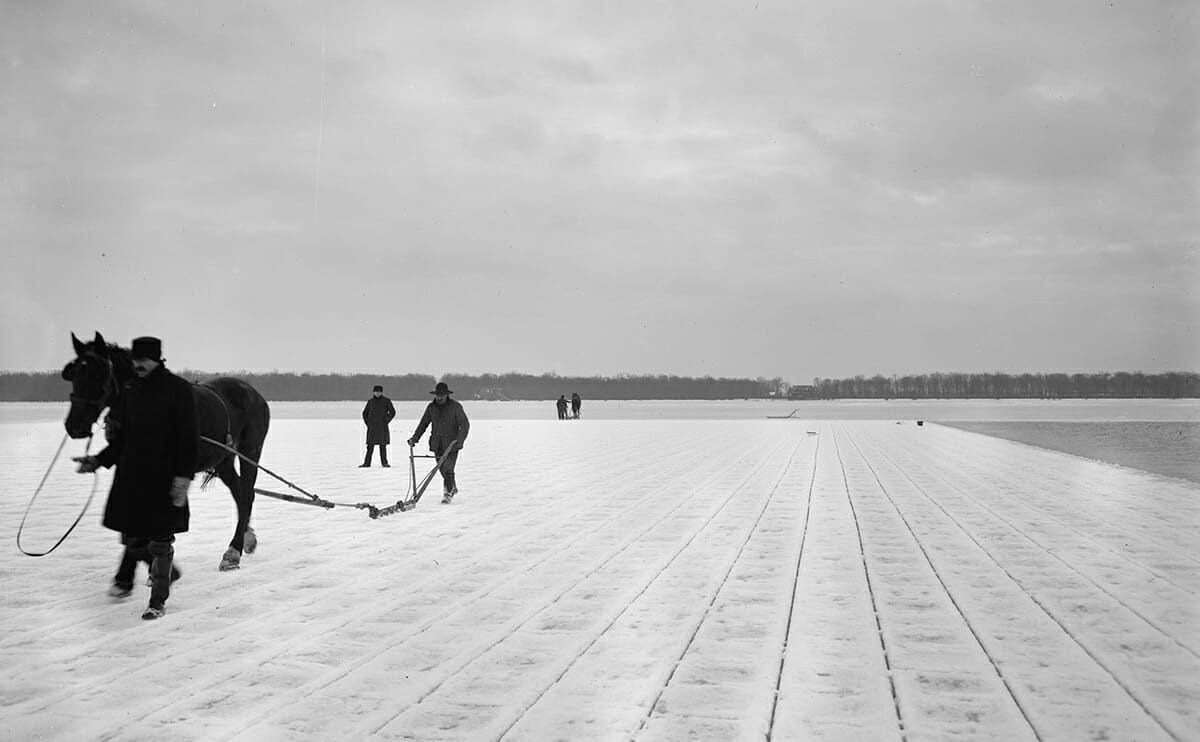 Up until that point many cocktails were made with added water, but it didn’t take long for the concept of “cooling drinks” with ice to catch on. Different shapes of ice were specified for different drinks: lumps of ice for cocktails, shaved ice for juleps, and cobblestone ice for cobblers. These new drinks were so delicious it seems every foreign visitor to the U.S. in the early 1800s commented on the marvelous cocktails in this country. Soon, “American bars” opened up in big cities around the world serving these refreshing and exotic delicacies. But the glory days of the cocktail in America came to an end in 1920.

The thirteen years of Prohibition pretty much killed the art of bartending in America, and it took decades for things to begin to turn back around. It wasn’t until after 2000 that a critical mass of American bartenders began looking to drink books from Frederic Tudor’s time, and classic cocktails came back into fashion. High-end bars gave better attention to each element in the cocktail, from the base spirit to the type of sugar used in the simple syrup, and eventually to the shape and size of ice best-suited to each drink. The problem was that by then nobody harvested ponds anymore, and machine-made ice provided one size of cube for all types of drinks in most bars.

The problem was that by then nobody harvested ponds anymore, and machine-made ice provided one size of cube for all types of drinks in most bars.

The familiar crescent-shaped ice that instantly waters down your drink (known in the industry as “shitty hotel ice”) wasn’t good enough for this new crop of cocktail bars, but luckily some ice machines became available that could produce larger, clearer cubes. These (roughly 1.25-inches square on each side) cubes were a vast improvement over crescent ice. But still, bartenders wanted more options: bigger cubes and blocks to carve up into different shapes like the giant spheres they’d seen and heard about from Japanese bartenders, who may not have been on the forefront of cocktail culture, but used a refined and exact bartending technique.

Though it’s easy to create blocks of ice in a home or commercial freezer, this ice is cloudy and is nowhere near as aesthetically satisfying in a glass as clear ice. Cloudiness in ice is not caused so much by impurities in the water but by trapped air, and all the common tricks employed to make clear ice (boiling the water first, using distilled water, melting and refreezing ice) don’t make much of a difference to the clarity of the final product. Known ways to make clear ice are slow-freezing (setting the freezer to just below zero degrees, which lets trapped air escape as it freezes), and freezing ice from the top-down in an insulated container like a picnic cooler with the top off and discarding the cloudy bottom.

But the easiest way to get clear ice for one’s bar, it turns out, is to buy it. Ice sculpture companies mostly employ Clinebell machines that produce 300-pound blocks of clear ice. These machines operate with a cold plate at the bottom of the unit and a water circulator near the surface. The water freezes from the bottom-up, with the circulating water preventing the top from freezing until last.

When bartenders got hold of these blocks, a new ice industry was born. The bar Weatherup in New York claimed in 2010 to be the first bar on the East Coast with “in-house ice harvesting and production” from their Clinebell machine in the basement. One of the bartenders from that business went on to open Hundredweight Ice Company in 2011, probably the first bartender-born cocktail-ice-only company of the modern era. They cut the 300-pound blocks into 2-inch cubes that fit into rocks glasses, long spears for tall drinks and round spheres for spirits on the rock — and deliver them to New York cocktail bars.

On the West Coast, bartenders took delivery of these huge blocks of ice from various ice companies and then cut them into cubes themselves using woodshop tools, and a group of Seattle bartenders made an occasion out of it at “Chainsaw Thursdays.” To this day, with chainsaws, band saws, specialty Japanese ice saws, knives and picks, many bartenders around the country spend one day each week cutting up blocks of sculpture ice into custom shapes. In California, the Glace Luxury Ice company carves ice spheres and cubes and mails them via Federal Express to anywhere in the continental US. A 50-cube order will run you $325 including delivery.

In the years since Hundredweight opened, more ice sculpture companies have been goaded into producing cocktail ice for bars, and more bartenders have purchased their own ice machines to launch cocktail ice companies. In Los Angeles, Penny Pound Ice was founded by Eric Alperin, co-owner of The Varnish bar, and in Chicago, bartender Mike Ryan is an owner of JustIce, a company that measures each new client’s glassware to produce a shape specifically suited to it. In Dallas, The Cold Standard owner MÁ¡té Hartai has spent the last couple years developing a smaller, more practical ice block machine that he hopes to patent.

The new ice age is a global one as bartenders are in better contact with each other online, but different countries have different starting points. In Tokyo, most bars do not own ice machines, so bartenders there are used to handling the various-sized lumps delivered to their bars daily and cutting them down to fit each individual drink. And by using 1830s technology, they are far more advanced at ice handling than bartenders in other countries unused to wielding icepicks.

As in America, bartender-born companies like Park Island Ice Department in Stockholm have launched specifically to serve cocktail bars, while the bigger sculpture ice companies like London’s Eskimo Ice produce ice in a huge number of shapes, including some with a bar’s logo carved into it.

The modern-day cocktail renaissance has influenced many businesses beyond bars (start-up syrup companies, vintage cocktail book reprinters, bar tool makers, etc.), but the specialty cocktail ice industry must be one of the most wonderfully absurd. The cheap resources required have changed from ponds in winter to electricity and water, but now the machine-made, chainsaw-chopped, custom-cut, delivered-daily ice chills and decorates drinks invented two centuries ago at speakeasy-themed cocktail bars around the world.