Zack Seckler recently found himself in Africa with some free time on his hands. Instead of photographing from ground level, he took his art to the sky. 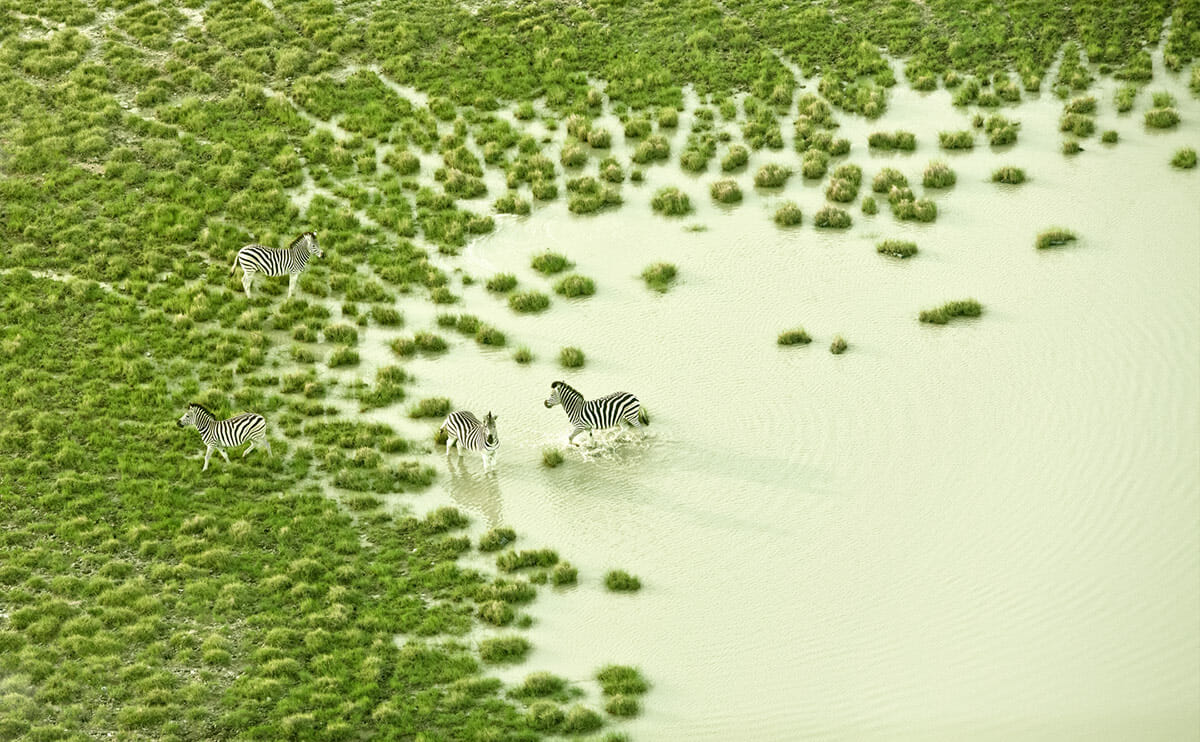 Modern Farmer: How did you find these locations?

Zack Seckler: The first time I was in Botswana I was doing a photographic commission for a land reserve in the region. On the tail end of the commission I had a few days to myself, so I reached out to the client and I was like, ‘I’d love to be shooting something, but I have no resources or know anyone. Can we figure something out?’ They found this guy in the region who had a bush plane; one of those ultra-light aircrafts which are literally two seats, no windows, just a windshield.

The first flight I took was over the Makgarikgadi Pans. The second I got up there I knew immediately that this was a really special experience. The landscape took on such unique character from that elevation. Also the aircraft that was so small and maneuverable I could say, ‘Hey – go over here, or lets go lower or higher and see what this looks like, or let’s circle around this spot.’ I just had this incredible flexibility.

I liken it to being over a giant painting and being able to create brushstrokes. I used my frame to create images out of that huge open canvas. The elevations that I was flying at were between 50 and 500 feet, which is pretty incredible in an airplane. The landscape hovered on the line of things looking very real and recognizable and being more abstract. That’s what really drew me in, the line between abstraction and reality.

MF: When you shot from higher and lower elevations, how did the landscape transform visually?

I would position the camera directly over the landscapes to create a two dimensional effect.

ZS: There are so many variables with the elevation, like the lens that I was using and the actual angle I was shooting at. But what I would try to do was position myself and the camera directly over the landscapes to create a two dimensional effect. It was important to have the camera plane be completely parallel to the ground. The elevation allows you to make something look more like a traditional landscape or a more of an abstract one. Different elevation also makes the animals more or less recognizable. Footprints change too. When you’re up high you see tons and tons of footprints across these muddy areas, and up close its just kind of ugly, but when you get up high it becomes really artistic. It was a special kind of elevation; one that you can only achieve in a small aircraft. The flights were about one to two hours each. Some were a little bit longer, maybe three hours but in that range.

MF: Did you travel with the same pilot on multiple occasions?

ZS: In the Makgarikgadi Pans I did. He was a great guy, an older gentleman who retired from flying jumbo-jets his whole career and takes flights as a hobby. He lives in a really beautiful, completely backwoods part of the country, in the middle of the wild. In the Okavango Delta I flew in a little bit bigger plane, I think a four person, and basically they just took the door off. It was a pretty harrowing experience. I was still trying to get that 2-dimensional perspective so the pilot would have to circle over and I would be looking straight down, out the door, onto the landscape. The only thing holding me to the plane was my flimsy seatbelt. It was very memorable.

MF: What was the most amazing thing you saw that you weren’t able to capture on camera?

ZS: There were some places that were really beautiful and looked perfect in the soft, early morning light but there wasn’t enough light to photograph from. When you’re flying at lower elevations, the landscape is moving really quickly beneath you, so you have to have a higher shutter speed to freeze the landscape and have it be sharp.

I wish there was more animal life in some of the shots. When I got up in the airplane I saw zebras but a lot of cattle too. Which, you know, just isn’t quite as exotic. In the Delta there are tons of hippos and crocodiles and it would have been amazing to see some of those. I think the wildlife really punctuates the images and takes them from abstraction into reality. With the animals it gives a nice sense of scale and I think it becomes a little bit more relatable because there is something living in the photo.