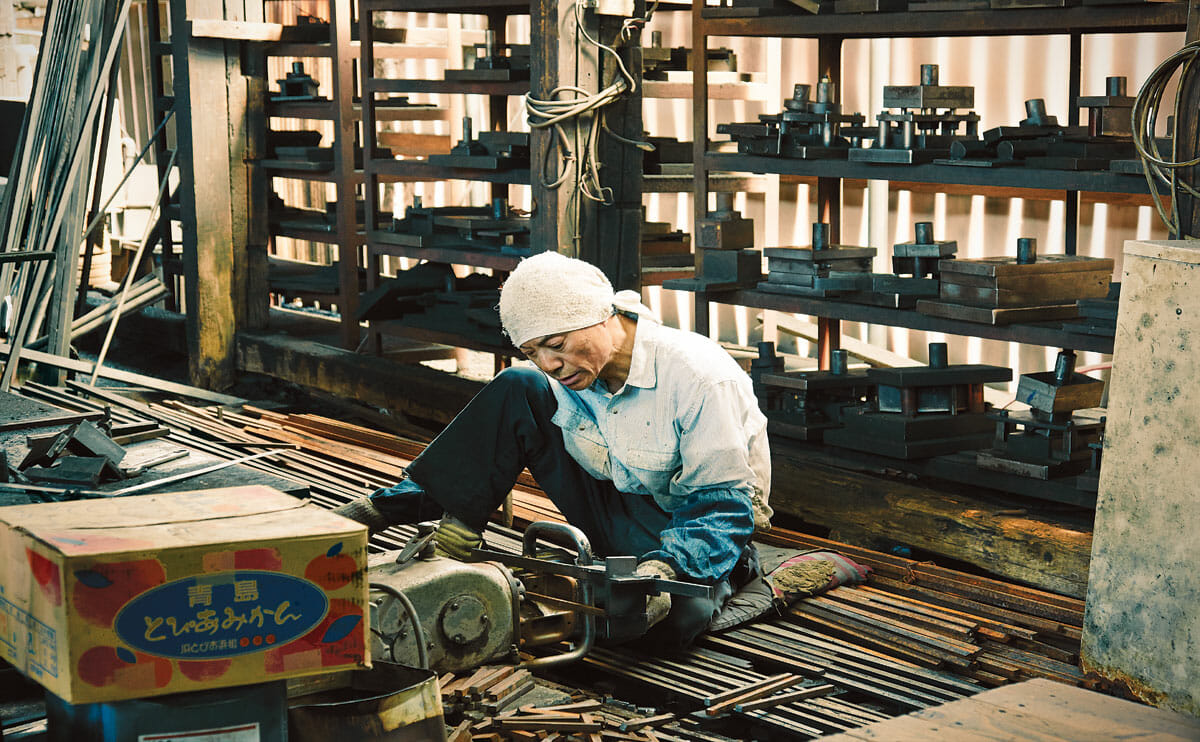 From the hundreds of Japanese scythes, hoes and forks hanging on the walls around toolmaker Satoshi Aida’s office, it’s clear that he’s not a one-tool-fits-all kind of guy.

Holding up a wooden-handled hoe with an angular steel rim, he says, “See this? It’s made for scraping the bark off grape trees in Yamanashi. The pronged fork next to it is for peanut farmers in Chiba. And the tool over there with the long, thin blade is for pulling up bamboo shoots in Kyoto in early spring.” All told, Aida says that there are some 10,000 different farm tools in Japan, each with a very specific purpose, depending on the location, the soil, the use and the season.

Aida, 51, is president of Aida Godo Kojo, a small farm tool factory in Sanjo City, located in Japan’s Niigata prefecture – a region synonymous with green mountains, tiered paddy fields and high-quality rice. The town has been famed for its blacksmith community since the 17th century and remains a hub for small, specialist metal businesses, from kitchen cutlery to the scissors used to prune bonsai plants. It’s here in an old wooden building that Aida’s company, founded in 1930 by his grandmother’s brother-in-law, Tadao Aida, creates 140,000 farm tools and components annually – many built by hand.

From the quiet lane outside, the workspace appears more farmhouse than factory: a one-story rural minka-style (the type of dwelling traditionally inhabited by farmers) building dating back almost 70 years, with a tiled roof, high ceilings and a 2,100-square-foot network of workstations cluttered with materials and machinery.

Workers – with headphones, goggles and sweat-mopping tenugui fabric tied around their brows – diligently mold metal over red-hot coals. The 40-year-old faded mint-green machines, dusty clocks, mismatched chairs and corkboard covered with scribbled order forms are a testament to the workspace’s status as home to more than seven decades of toolmaking.

Fusing traditional craftsmanship with painstaking precision, the 17 staff members – aged 20 to 77 – produce an encyclopedic range of 4,000 types of farm tools, each tailored to deal with the archipelago’s mountainous terrain, soil, weather and crop varieties. Dominating their repertoire are around 3,500 hoes – from the flat touguwa type for pulling up springtime bamboo shoots to the easy-to-use tombi, a lightweight variety named for its shape’s resemblance to the coat worn over a man’s kimono.

If these razor-sharp steel and iron blades look deadly, it’s no coincidence: Ninjas have been known to make lethal weapons from farm tools.

Each implement is simple and functional: Japanese wood handles are often crafted from kashi oak. The razor-sharp steel and iron blades make it easy to understand why once upon a time, Japan’s ninjas were known to make lethal weapons of farm tools.

Workers begin in a cramped room filled with towering machines, cutting templates for the tools before moving on to a larger space next door, where the most critical craftsmanship takes place. Here, they move the metal in and out of large, noisy spring-hammer machines and then weld it in tongs above hot coals, masterfully shaping the tools by hand.

It’s calmer in the next room, where workers hunched on wooden chairs polish metal and sharpen blades. Finally, pre-purchased Japanese wood handles are affixed to the tools.

These utensils are for life; the factory also repairs a thousand implements every year.

“The longer you use a farm tool, the better it becomes as it adapts to the body of the owner,” explains Aida, a former financial salesman and father of six who started working at the business when he was 28.

As Aida picks up and examines the angular metal blade of a soon-to-be vegetable hoe, his muscled hands and forearms reflect how his own body has adapted to the physical demands of over two decades of toolmaking work.

“It’s not easy making farm tools,” he says. “It involves time, physical strength, technique. It takes 10 years to learn how to make a farm tool.”

One small space in the factory is dedicated to a recent addition: machine-manufactured garden tools, a reflection of the company’s quest to diversify amid shifting economic and social demands. A rapidly aging population has fueled a
steady decline in farmers, while competition from mass-market factories in China grows.

Then there was the Fukushima nuclear disaster triggered by the 2011 tsunami and earthquake, which resulted in a sharp drop of business from farmers. Production of – and demand for – the northeastern prefecture’s once-famed farm produce plummeted due to contamination fears.

But in the wake of disaster, a new kind of farmer has sprung up. Aida has noticed an increase in younger Japanese people requesting tools to clean up neglected farmland and grow their own crops. “People’s mindsets have changed since the disaster,” he says. “There is greater awareness about food safety. People want to eat safe fruits, vegetables and rice, so they are starting to grow their own food.”

The elder Aida, who is currently teaching his 20-year-old nephew the art of toolmaking, adds: “Whatever happens, people will always need to live and to eat. Farming tools are not going to disappear.”