An organic dairy farmer from down under finds a way to make a living in the midst of an ugly milk price war. 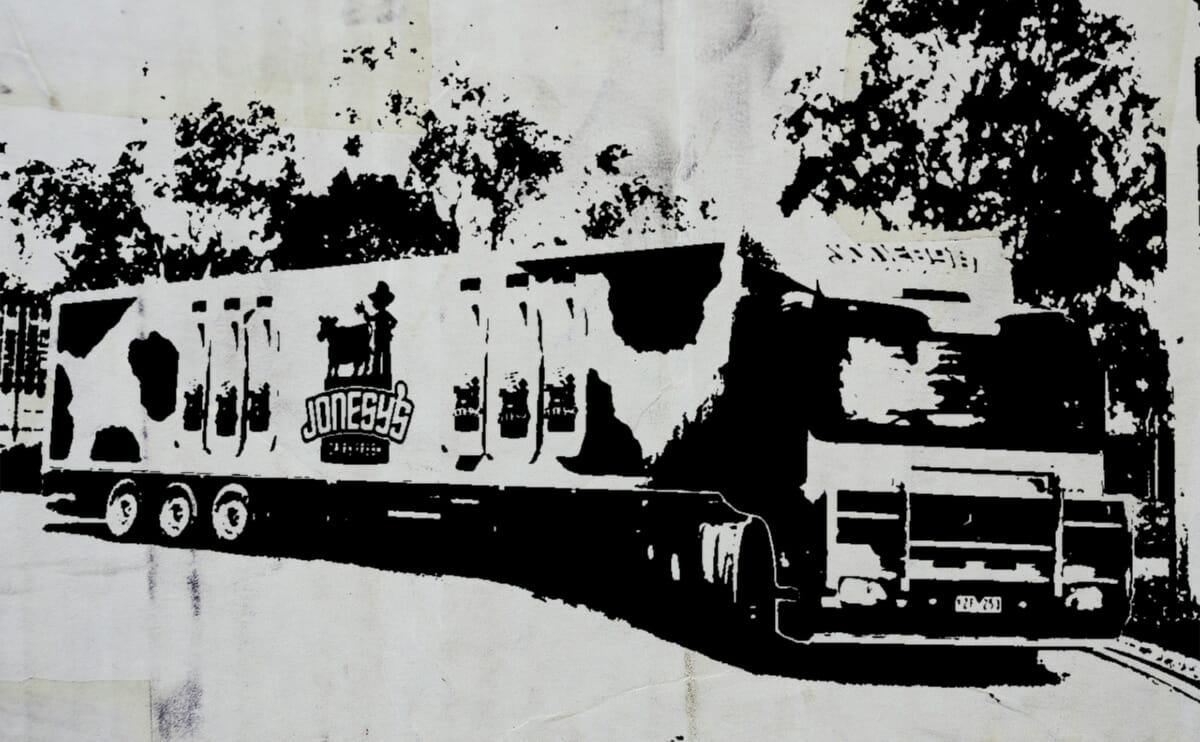 In a land never meant for cattle grazing, dry for years on end, Australian dairy farmers always had to be inventive to survive. In recent years, problems on the land have been the least of their worries. With the industry battered on one side by a brutal supermarket war that has driven prices down to levels not seen since the early 1990s, and on the other by a global milk surplus and a too-high Australian dollar, even the biggest players have thrown their hands up in despair. From the outside, it seemed like nothing short of time travel could get the industry back to a place where farmers could make money. But not everybody has given up – outside of Melbourne, farmers like Wayne Somerville of Jonesy’s and Simon Schulz of Schulz Organic have carved out sustainable futures in the wreckage of the industry by making up their own rules, and changing the way the game is played.

‘The simple truth is nobody is making money and you can’t make money if consumers buy milk at one dollar a liter.’

Australian food producers have found themselves held increasingly tightly in the grip of an effective supermarket duopoly. Two retailers, Coles and Woolworths, dominate the industry and wield enormous power over pricing. In the milk fridge, their race to the bottom has turned into all-out war. Traditionally strong brands have suffered as the Big Two have stocked their shelves with private label products produced on razor-thin margins. In 2011, the retail price of own-brand milk, accounting for over 50 percent of all milk sold on their shelves, dropped to one dollar per liter. Back at the farm gate, only 29 cents for each of those liters made its way into the honesty box.

Rob Murray, the former chief of dairy producer Lion, departed the industry with strong words, likening the business to a charity. “We don’t make any money on milk,” he was reported as saying on his way out the door of a business which, alongside companies Parmalat and Dairy Farmers, processes almost all milk sold in Australian supermarkets. “The simple truth is nobody is making money and you can’t make money if consumers buy milk at one dollar a liter.”

If you head a few hours inland from Melbourne to Kerang, you’ll find one farmer who is doing his best to prove Rob Murray wrong. “Most farmers in the last twelve months have been getting less than the cost of production,” says Wayne Somerville. “For every liter of milk they’ve been producing they’ve probably been losing seven or eight cents a liter. They’ve tended to devalue our product a lot. For a lot of people, it’s drawn a line in the sand.”

Wayne had been in the dairy industry for four decades when he faced the stark reality of a failing business. He had a decision to make – change everything about how he worked, or get out. He and his 1,800 cows washed their hands and hooves of business as usual, and under the brand Jonesy’s,” set about supplying milk directly to small supermarkets, milk bars and cafes.

“We realized that we just couldn’t make ends meet,” he explains. “It was either take control of our product, sell up or go broke. We love farming but we hate the fact that farmers are always on the end of the line and they get what’s left over.”

‘We love farming but we hate the fact that farmers are always on the end of the line and they get what’s left over.’

Wayne’s milk is still bottled offsite on contract, though he hopes to take control of this last part of the process in the near future. Before he had any sales, the processor required a minimum order of 4,000 liters, leaving him with the near-impossible task of offloading it before it soured. This became a Christmas miracle of a marketing opportunity, as he sent his kids knocking on the doors of a nearby city, Bendigo, giving it away to anybody who answered. One way to beat dollar milk, Wayne suggests, is with a smile and a lot of free product.

“We’re fortunate that we probably do understand marketing a little bit,” he says. “Most farmers are good at what they do, producing milk, but take them outside the farm gate and that’s a different story. We tend to just get stuck in and have a bit of a go, and perhaps don’t evaluate things as much as we could. But you probably wouldn’t ever do anything if you look at all the pitfalls.”

“Farming itself may not be super profitable, but processing can be,” says Simon Schulz, whose organic dairy in Timboon, on the south coast of Victoria, produces just under a million liters a year, as well as a line of cheeses, yogurts and cream, all processed on-farm. As winter rolls in, supplies are running low, and the high-end cafes in Melbourne, who adore his product, are struggling to get hold of enough. For Simon’s business, the dairy industry’s hard times have been, perversely, a blessing.

“Once the price wars started, I noticed very quickly that a discerning consumer would choose a locally produced product where the profits go back to the farming side,” he explains. “Now, the news has fallen into the waste basket, but we continue to grow. On the farm our focus is on the health of the cows, and maintaining the soil fertility. We’re doing much better than most of our neighbors after the end of a bit of a dry spell down here. If we keep the cows right and we keep the soil right, we’re going to grow grass and we’re going to have happy cows producing healthy, good quality milk.”

It’s easy for a farmer already working in organics to point out how much simpler life can be if you throw out the rulebook, but in an industry where daily struggles are defined by debt as much as they are by the needs of cows, turning to organics and taking control of sales processes isn’t as simple as all that. However, as demand for Simon’s milk is exceeding supply and he looks to bring new producers on board, he sees enthusiasm for change coming through in the next generation.

‘Once the price wars started, I noticed very quickly that a discerning consumer would choose a locally produced product where the profits go back to the farming side.’

“I go around to the local farmers every now and again to ask, would you like to turn to organics?” he explains. “Because I need the milk! I’ve spoken to farmers who are of my father’s generation who say they would if they were 20 years younger. They can see that the profitability might be about the same, but there’s less fluctuation. The younger ones certainly do consider it.”

Though, Simon says, he would love to be “as successful as his grandfather was” on the farm, he’s not trying to prove anything. When he is doing well, and employing people in production, it has the happy side effect of bringing energy, and jobs, to the local Timboon community.

“That’s the thing about regional areas,” he says. “Many communities are being eroded away by the droughts and so forth. When things are going well, people like myself who are successful can help stimulate the local area and prove successful for others, not just myself.”

Dairy Australia’s 2013 Situation Report paints a bleak picture of a struggling world market, “challenging” production conditions, and low morale across the board. There is some hope to be found in the supermarkets’ promises to work on increasing the farm gate price, and in experiments with purchasing directly from farm cooperatives, bypassing the multinational producers, but for Wayne, the Jonesy’s model insulates him from all of this. It’s rough work, but when asked if he’s happy, he can only laugh.

“Look, it’s a lot of work,” he says. “I suppose this year it’s starting to pay dividends for us. It’s just nice to know that we’re getting a price on the farm that is better than break-even.”