(Above: Farmer Vernon Hershberger between two of his lawyers, Glenn Reynolds and Elizabeth Rich.) “Food soverigenity” activists received a big boost last week in a small-town Wisconsin courtroom, where dairy farmer Vernon Hershberger went on trial in connection with four criminal misdemeanor charges associated with failing to have the requisite permits for selling raw milk […] 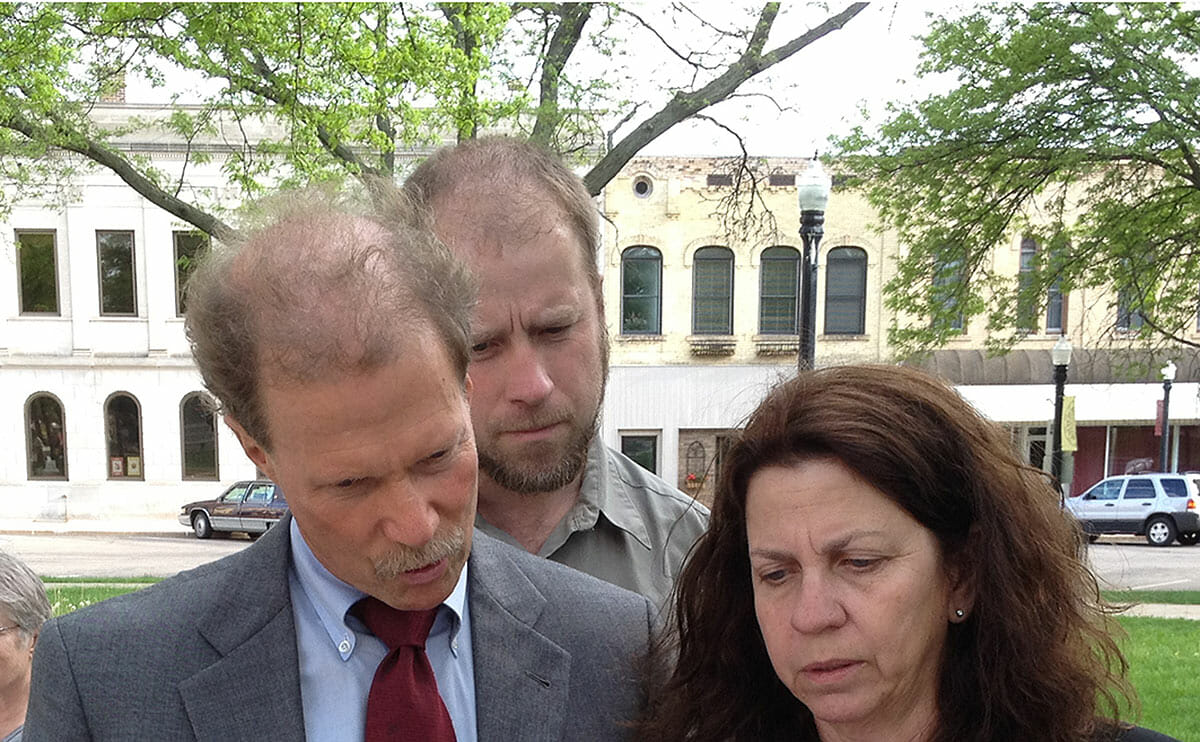 (Above: Farmer Vernon Hershberger between two of his lawyers, Glenn Reynolds and Elizabeth Rich.)

“Food soverigenity” activists received a big boost last week in a small-town Wisconsin courtroom, where dairy farmer Vernon Hershberger went on trial in connection with four criminal misdemeanor charges associated with failing to have the requisite permits for selling raw milk to about 200 members of a private food club.

A jury of six men and six women decided the case after hearing five days of testimony from about twenty witnesses, including state agriculture investigators and bureaucrats, members of Hershberger’s Grazin’ Acres food club, and members of Hershberger’s family. The jurors took less than four hours to acquit him of all the licensing charges, finding him guilty only of violating a state holding order on food sales, which he had admitted to.

The charges stemmed from a lengthy and intensive investigation conducted during 2009 and 2010 by the Wisconsin Department of Agriculture, Trade, and Consumer Protection (DATCP). The investigation was capped by a raid on Hershberger’s Grazin’ Acres farm by DATCP agents, accompanied by armed sheriffs, on June 2, 2010, during which DATCP issued a holding order barring Hershberger from even moving any of the food in his small farm store in Loganville, WI.

The agents put tape and seals on his coolers, freezers and food shelves, and threw a vial of blue dye into a milk tank full with more than 2,000 pounds of raw milk.

The agents put tape and seals on his coolers, freezers and food shelves, and threw a vial of blue dye into a milk tank full with more than 2,000 pounds of raw milk. The dye, while it didn’t poison the milk, was designed to make the milk unappetizing to humans.

Hershberger cut the tape the agents placed on his coolers and freezers, and told members of his food club he would defy an order that had the effect of depriving them of the food they obtained through the club, including raw milk and other dairy products. DATCP responded by asking a local district attorney to file more than 30 criminal charges against Hershberger, but the prosecutor declined.

Eventually, DATCP asked the Wisconsin Attorney General to appoint a special prosecutor to file four criminal misdemeanor charges against Herschberger, accusing him of failing to have permits associated with food retailing and commercial milk production, and for violating the holding order.

The trial was delayed twice in 2012 while prosecutors and defense lawyers wrangled over what could and could not be argued during the trial. Eventually, the Sauk County judge, Guy Reynolds, ruled against the defense on nearly every pretrial issue – there would be no consideration of whether Hershberger had criminal intent (which would have made a conviction more difficult), no discussion of the pros and cons of raw milk, no discussion of why Hershberger decided to violate the holding order and no discussion about the health issues that drove individuals to Hershberger’s food club.

Over five days in the county courtroom in tiny Baraboo, the prosecutors and defense attorneys traded charges and countercharges. The prosecutors said that the food items in Hershberger’s farm store all had labels, complete with unit and total prices and use-by dates, much like any retail store. Eric Defort, an assistant attorney general for Wisconsin, told the jury that the store was “a place where you go to purchase things … products with prices, on shelves, in coolers” like pork, bison, cheese and juices. A Wisconsin agriculture inspector testified that Hershberger’s farm store had sales of between $20,000 and $25,000 monthly during the first few months of 2010.

To Hershberger’s claim that he was exempt from retailing and dairy regulations because he was running a private members-only club, the prosecutors said the arrangement was no different from a Sam’s Club or Costco, which have member-only policies. Such retailers must have the same permits and licenses as other retail food operations, prosecutors said.

Hershberger argued that his store was different – that the labels on his foods served as “guidance” on pricing. A number of members, who worked part-time at the farm, were compensated via discounts on their food. One such member, Karen Kitzerow, said she would work one or two days a week to “help on the milking, bring the cows in to be with the calves, clean udders, clean milkers.” Her husband helped as well with milking and hauling materials around the farm.

Members who were short of cash were able to obtain milk as well, testified retired carpenter Bill Patton who manned the cash register one day a week. “Vernon mentioned to me that certain members should get food” without paying, Patton said.

Defense attorney Glenn Reynolds seemed to discredit one witness for the state, a county health inspector, who testified that during an inspection of Hershberger’s small store, he had seen many different kinds of products marked with labels and prices. Reynolds questioned whether the inspector had bothered to inquire about whether the large Hershberger family (Hershberger is father to ten children) regularly accessed the store for its own personal food. He hadn’t, nor had he checked into whether non-members were allowed to shop at the store (they aren’t).

Probably the star witness for the defense was Hershberger’s father, Daniel Hershberger, a tall man with a full gray beard. He described how Hershberger grew up in an Amish community in Ohio as one of 17 children. All his children learned to farm using a horse-drawn plow, he said, and Hershberger still relies on one.

Climbing land prices encouraged Hershberger and his father to move to Wisconsin in 1998, and Daniel helped Hershberger acquire the farm he presently owns. For the first few years, the farm was a conventional dairy farm, providing milk to a processor.

He said that Hershberger began setting up the food club in 2004 when the men realized that people “want food with integrity, that’s honest, that’s real.” The membership approach expanded quickly. Members would help out in different ways – “they would rake manure, clean jars, sweep the floor.”

There were also social get-togethers, when members would bring their children to pet the calves. “Did you ever have ice cream socials?” asked defense attorney Glenn Reynolds. “I don’t know what it was called, but it was fun,” the elder Hershberger said, to laughter in the courtroom.

When Reynolds asked Daniel whether non-members were allowed to access food, he said they weren’t supposed to shop, but, “If a person comes to our farm and is not a member and he is hungry, he will not go hungry.”

The acquittals appear to leave Hershberger free to run his farm as he was, without the need to have regulator oversight of his operation.

Such visions of farming mixing community and charity contrasted with the regulators strict interpretations of rules and regulations. The jury acquitted Hershberger at about 1 a.m. Saturday, after having received the case at 9 p.m. Friday at the conclusion of five intensive days of trial.

The acquittals appear to leave Hershberger free to run his farm as he was, without the need to have regulator oversight of his operations, and able to provide a wide variety of food products, including raw milk, which is officially available from dairies only on an “incidental” basis. A big unknown is what penalty the judge will impose for the conviction of violating the holding order. Technically, he could jail Hershberger for a year and fine him $10,000. Given that the farmer was cleared of the accusations that prompted the holding order in the first place – failure to have the right permits – it wouldn’t be a surprise if Hershberger winds up with just a small fine.

What’s most unclear is exactly how the acquittals on the regulatory-related charges will affect the dozens of other small Wisconsin farms that sell raw milk privately. For now, it seems as if regulators may well be reluctant to aggressively go after any more of them. And after the outcome of the Hershberger trial, regulators might not be eager to face another jury.

(An earlier version of this article was published without the names of the two witnesses in the trial, Karen Kitzerow and Bill Patton.)

1
Reply
Shame on Us: When Feeding the Needy and Desperate Become Criminal Acts - David Gumpert

[…] a week-long trial in 2013 where a guilty verdict could have meant more than two years of jail time, he was acquitted by a jury of his peers, several of whom were so moved by his efforts that they joined the […]