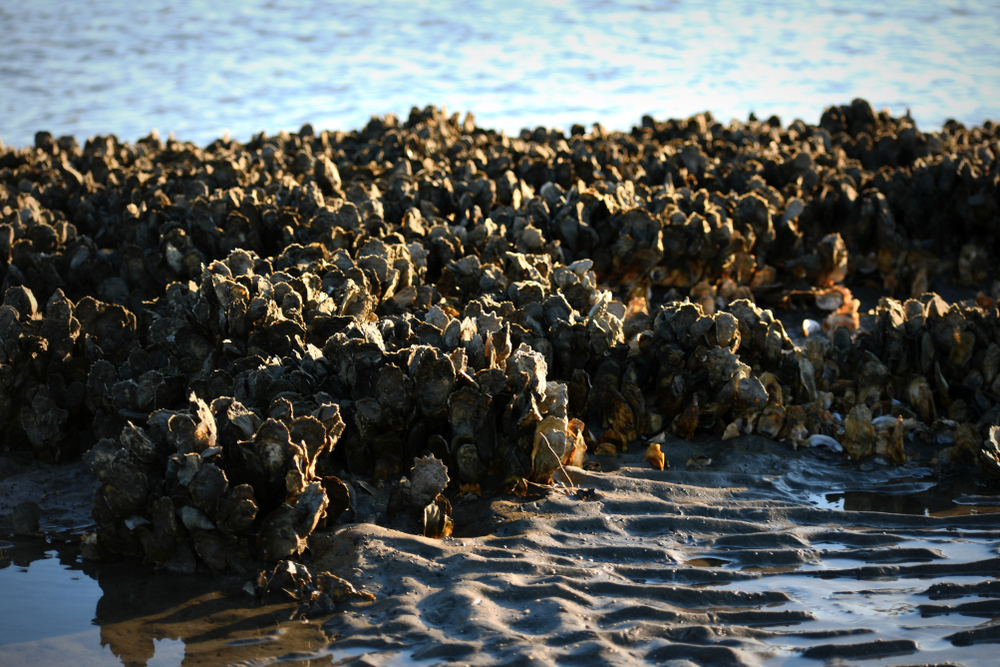 Oysters clean waterways by filtering pollutants such as microalgae and microscopic organisms in the water, and prevent erosion.
Photography by Shutterstock
Share
Tweet
Pin
Email

Over the 19th and 20th centuries, oyster populations worldwide have been decimated; at least 85 percent of habitats have been lost due to overfishing, pollution and disease. Despite a recent rise in farming and eating oysters, their habitats have yet to recover. But with the help of interactive mapping tools, scientists and conservationists hope to restore oyster populations and the environmental benefits their habitats provide.

“In most places, including North Carolina, limited resources exist to restore habitats such as oyster reefs, and thus there was a need for an approach that integrated the best available data to direct restoration projects to the best locations, essentially asking the question, how do we maximize the bang for the restoration buck?” says Brandon Puckett, a research marine biologist with NOAA National Ocean Service.

In 2019, Puckett and a group of researchers from North Carolina State University launched a software mapping tool, designed to identify the best sites for re-establishing oyster reefs to ensure their ecological benefits.

Oysters are so much more than just delicious protein sources; they’re climate-friendly environmental superheroes. Oysters sequester carbon, clean waterways by filtering pollutants such as microalgae and microscopic organisms in the water, control the amount of phytoplankton in the water, create habitat for other marine life and even help prevent coastal flooding and erosion.

“Most restoration suitability models are focused on where to restore to maximize population enhancement benefits, which is a common goal of restoration efforts,” says Puckett. “However, there are other objectives that restoration practitioners pursue—such as improving water quality or stabilizing shorelines.” Puckett says their mapping technology looks to find locations suitable for restoring populations and enhancing water quality.

When they were developing the mapping or suitability tools, as Puckett calls them, researchers looked at similar mechanisms in use in the Chesapeake Bay and the Gulf of Mexico. They aimed to add on to existing technology after asking several partners what factors they thought were important. Their GIS-based device takes in a range of factors, including water salinity, dispersal of larval oysters and even distance from boat ramps.

Full of photographs, the Connecticut map includes a physical GIS map and allows a user to zero in on an area by name or zip code to show multiple data layers of habitats, human uses, existing shellfish beds and other information such as areas where oysters may provide the most water quality benefits.

“We’d been interested in developing a plan for oyster bed restoration for the last five years,” says Tessa Getchis of Connecticut Sea Grant, UConn Extension. “But if we want to protect and grow them, we need to know what else is happening.”

Much of the data from the Connecticut tool is still in the early stages, as it was developed during the early part of the pandemic, when large percentages of people in the shellfish industry were out of work. At that time, Connecticut Sea Grant secured funding, purchasing oysters from farmers who would have otherwise had no customers. They planted those oysters back into beds and closed off the areas to encourage repopulation.

“We can look at fishing activity or farms or where pipelines are, where docks were built and the water quality and temperature,” says Getchis. “We’re still building that research, but we’ve put it together in this portal and we’re working to sort through what is the best information, how can we make it more user friendly for people to develop restoration projects.”

The waters off the Connecticut coastline, according to Getchis, are home to some of the largest and most productive native oyster beds in the world, but due to the scale of such an undertaking, as well as the lack of funding, no one had surveyed them in more than 100 years. The state is also unique in that many of the protected beds are used as seeds for farming, with farmers given specific standards as to which oysters they can use.

“We restored more than 2,000 acres. Some will serve the aquaculture industry, while some will remain closed,” says Getchis. That work is ongoing and, while not on as large of a scale, [CT Department of Agriculture’s Bureau of Aquaculture and partner agencies] are expanding the area for restoration.

The team is now looking into optimal shell density, doing restoration work in deeper waters where Connecticut has historically had oyster reefs and developing plans to continue monitoring the habitats.

“These projects are designed with maximizing oyster population enhancement as the primary goal,” says Puckett.

The tool can also be tweaked to help with other restoration needs. Puckett says there’s already interest in creating individualized tools from states along the Gulf of Mexico, where the tool might identify locations for ‘living’ shorelines or inform the best areas for aquaculture farming.

For God’s sake let nature be.