The Perilous State of School Lunches

Two years of universal free lunches showed teachers and students what school meals could be. Now, administrators are bracing for the end of that funding—and getting creative with how to continue feeding kids with limited resources. 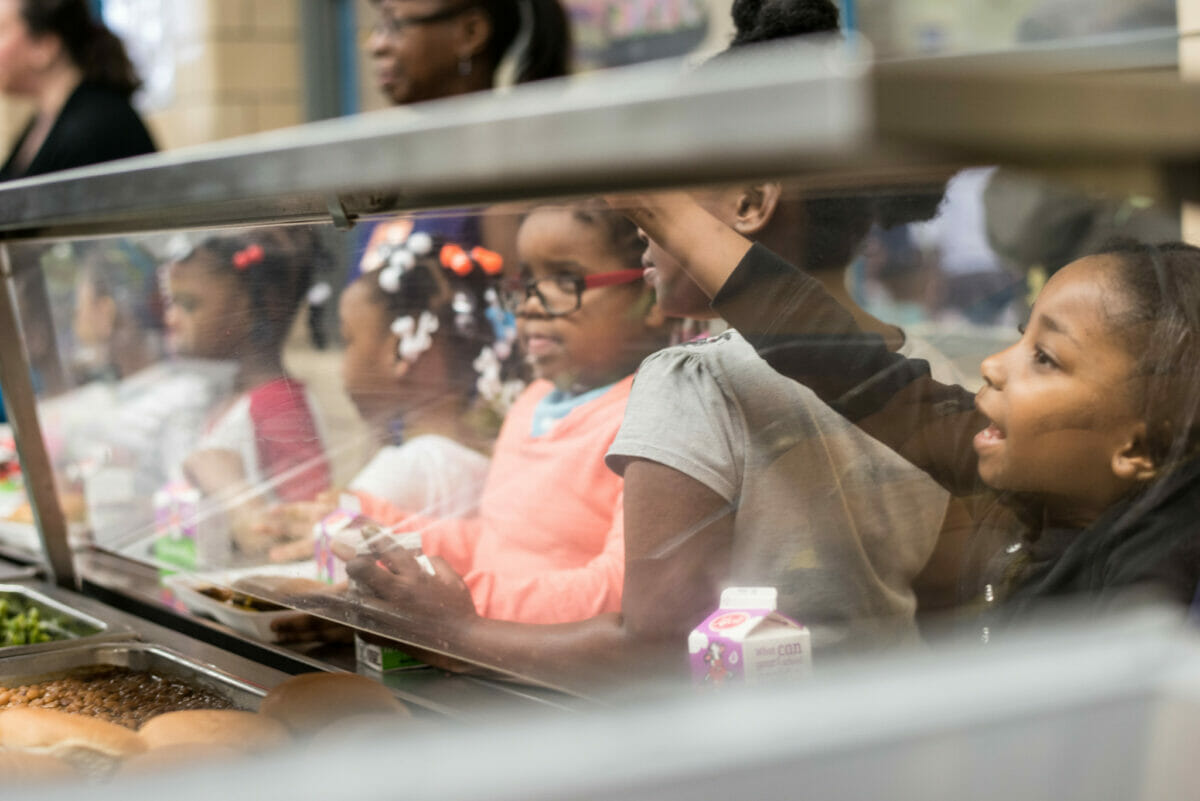 A new political battleground was drawn this summer in an unlikely place: the school cafeteria.

During the COVID-19 pandemic, funds from the American Rescue Plan Act made universal free lunch accessible in schools across the country. Rather than having to fill out applications or prove income levels, all kids were able to get free lunches—and sometimes breakfasts and dinners—through their school by using these lunch waivers. It’s something that advocates of universal school lunch have been championing for years: all kids getting access to meals for free through schools.

Earlier this year, Congress declined to extend the program, forcing some schools and some students to go back to the paperwork and budgeting of previous years. But after two years of universal lunch, not every state is reverting to their old ways. Some have decided to make changes themselves, resulting in a patchwork approach to free lunch. Starting this year, all public school students in states including Maine, California and Nevada will get free school lunches. Voters in Colorado will decide if their state will also serve up free lunches this November. Other states, including Maryland, New York and Minnesota, have proposed free lunch legislation that will be voted on at later dates.

Meanwhile, Congress did vote to extend extra reimbursement payments to schools for this year: an additional 15 cents for breakfast and 40 cents for lunch per student. That reimbursement is part of the Keep Kids Fed Act, which extended benefits from the COVID-19 pandemic until the end of the 2022-2023 school year. Prior to the pandemic, roughly 30 million children were regularly accessing free or reduced school meals due to their family income or status.

Administrators agree that universal meals was an easier system to follow, both in terms of paperwork and reducing the shame that kids often face when relying on free school meals. “When it was free for everyone, there was no stigma about going to pick [your lunch] up,” says Aaron Smith, director of culinary services at Seattle Public Schools. “This past school year, we served on average 20,000 meals a day. So, students are with everybody in the cafeteria and are more comfortable.”

Schools that receive USDA funding typically have to follow USDA guidelines, which has also led to political sniping this year. The USDA requires schools participating in the National School Lunch Program to hang a poster in the lunch room that states the USDA’s non-discrimination policy. At a press conference in August, Florida Governor Ron DeSantis told supporters that the Biden administration was threatening to withhold funds for school lunches as a way to push inclusion of transgender kids in sports. “They’re so intent on destroying the competition of women’s athletics that they’re going to use school lunch money for poor kids as a cudgel to try to get us to submit to what they want,” DeSantis stated. Currently, the USDA has not threatened to pull funding for any school districts in the country, although a Christian school in Tampa, Florida has filed a lawsuit over the poster. Florida Commissioner of Agriculture Nikki Fried shot back at DeSantis, calling him a liar. “Our department passed on nondiscrimination guidelines from the federal government—which only apply to the lunch line—saying that children can’t be discriminated against by being denied meals at school. That’s it. Nothing else,” Fried clarified in a statement.

Many school districts already have a policy of non-discrimination, even over non-payment issues. Lindsey Bradley, marketing specialist for the Austin Independent School District’s food services team, says that staff “continue to serve meals. Even if a student has a negative balance. Any kids that come through our lines are going to get the meal they picked that day. We don’t pull trays,” says Bradley. Still, those negative balances add up. The school has looked to crowdfunding and donations from community members to pay off the bills. But feeding kids always comes first.

And school lunches are worth lining up for these days. At some high schools in Seminole County, Florida, part of the Orlando-Kissimmee-Sanford Metropolitan Area, students are offered a variety of options that rival those of college dining rooms. If they’d like a burrito bowl, there’s Mixology, a tex-mex style bar with house-made cilantro lime rice, roasted red peppers and black beans. For pizza options, they can get in line for Pi 3.14, featuring a conveyor oven that cooks personal pizzas. There are options for stir fries, salads, fresh fruit and even a coffee bar for a lunchtime caffeine boost.

It’s a far cry from frozen tater tots and mystery meat of years past—which is exactly what many school districts are hoping for. School administrators and nutrition specialists across the country are working to provide healthy and affordable school lunches to hundreds of thousands of kids, which must all fit within the USDA’s nutrition guidelines, as well as their own district’s budgets, which can vary.

It’s a challenge, but many districts have come up with ways of promoting fresh and nutritious food for their students. In the Austin Independent School District, for example, Farm Fresh Fridays promote a veggie feature grown by a local farmer. At Seattle Public Schools, shopping local means that when the school cafeterias feature an Ethiopian lunch dish, they can purchase injera from a local store.

In the Seattle district, which teaches more than 50,000 students, Aaron Smith has also implemented changes in the last few years to distance the schools further from the stereotypes of unappealing school lunches. First, there was a new dress code for staff, who now wear chef’s jackets. “We also got rid of that five-compartment tray,” says Smith. “I can’t think of anywhere you eat off of a five-compartment tray besides jail. So, we brought in plates and bowls, real utensils and not sporks. Everything is like you are eating at a restaurant or at home.”

Lunchroom staff described the process of planning out yearly menus as both solving a massive puzzle and playing a teetering game of Jenga. Balancing the meals with the budget is getting increasingly hard, especially as supply chain limitations and inflation are causing food bills to skyrocket. “My bread bid came back at 138 percent higher this year,” says Jessica Shelly, director of student dining services for Cincinnati Public Schools, home to 67 public schools and 36,000 students.

But that hasn’t stopped her from ensuring students are provided quality meals. “Sourcing sustainably, where 65 percent of our produce is local, these things cost a little extra…so, we were really grateful for [the waiver extension this year], that extra 15 cents for breakfast and 40 cents for lunch.”

Some studies have shown the importance of good food for children, which can help improve test scores and attention spans in class. And administrators have seen the evidence for themselves. “The past two years have really proven the need for universal, free meals,” Austin’s Bradley says. “Going back to pre-pandemic operations this year, it’s been a challenge…It’s still a minimal cost, but it’s a cost that families haven’t had to worry about for the past two years.”

In Cincinnati, Shelly has also seen the benefits of universal meals. “When the pandemic closed schools down, one of the first thoughts we had was ‘how are we going to feed the kids?’” Shelly recalls. “COVID really highlighted the fact that nutrition is that ground level in the hierarchy of needs. And you really can’t build upon that or have success unless you have those kids feeling safe and fed.”

That’s the goal for these schools. Each administrator expressed how important their students’ nutrition was and how they try to expose the kids to new cultures through food. In Seattle, Aaron Smith says that if he puts a Creole dish on the menu, and “one kid eats that dish, I feel like it’s a win, because I made that one kid feel welcome for the day.”

Some hope that with different states introducing free lunch, more federal legislators and parents will come on board in support of national legislation. Universal lunch legislation has been proposed at the federal level, championed by senators like Bernie Sanders, Gwen Moore and Ilhan Omar, but it faces intense opposition. For now, it seems that a child’s access to free lunch depends on many things, such as their family income level and zip code—both outside of their control.

Agree all students should have free meals. Good nutrition helps learning and health. Just serve good solid meals in quantity and quality, not the crap Michelle Obama was pushing. HER kids, who went to very expensive private schools, didn’t eat such stuff.

Good column about school lunches, but I found it odd that the accompanying photo shows only Black students, and girls at that.