These College Students Want to Abolish Pesticides on Campus Grounds

Across the nation, college students are pushing for organic and regenerative groundskeeping. 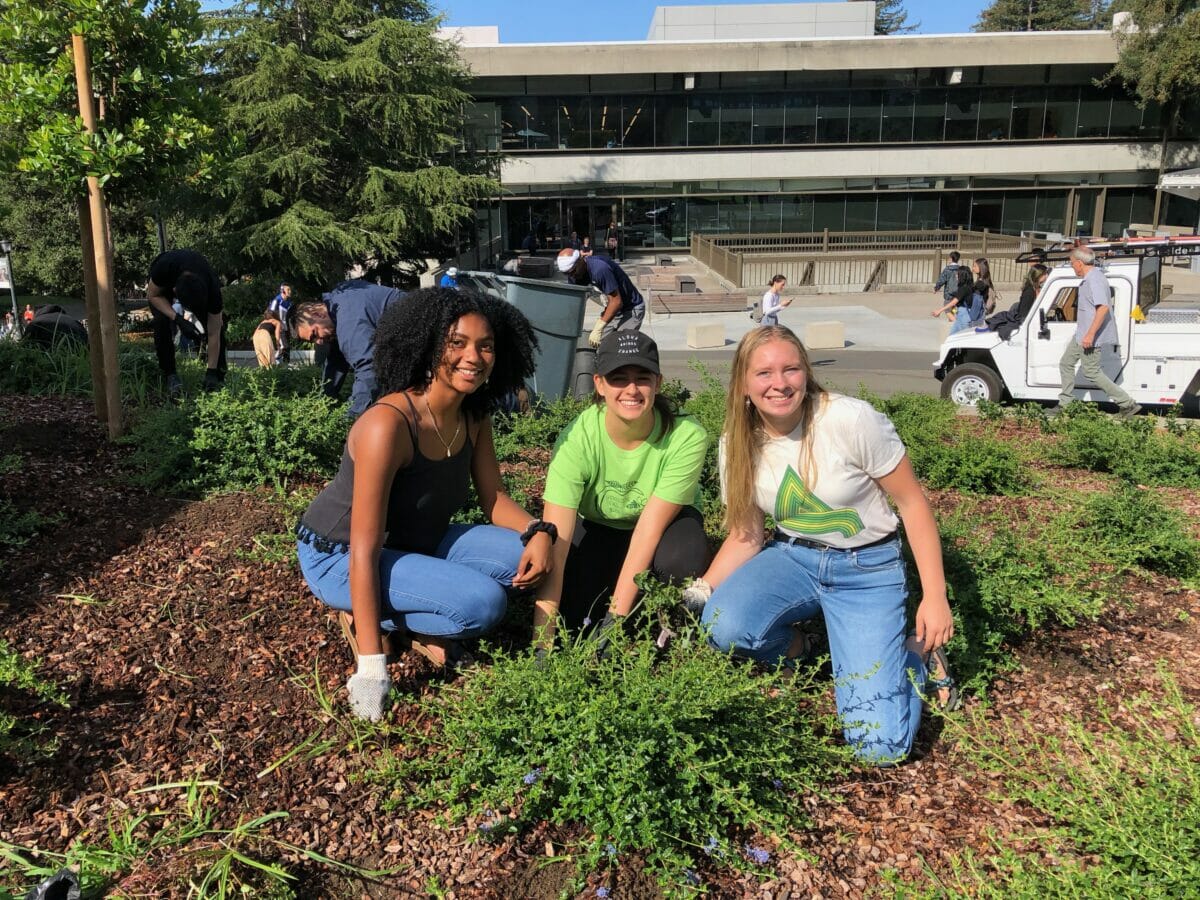 A grassroots movement is taking off on college campuses.
Photography courtesy of Re:wild Your Campus.
Share
Tweet
Pin
Email

Across the country, college students are rallying for grass. Their ranks are growing, with new members coming from the University of Michigan, Princeton and the University of Central Florida, among others. They’re applying for grants, petitioning their administrators and pushing for change.

Specifically, the students are coming together in the fight against pesticides and herbicides, used on college lawns to keep them pretty for campus tours, study sessions and outdoor sports. But while campus quads look lush and quaint, students say, they’re also loaded with harmful chemicals.

In 2017, two UC Berkeley beach volleyball players, Mackenzie Feldman and Bridget Gustafson, were motivated to push for change on campus. The teammates recall being at an outdoor practice session and hearing their coach tell them to ignore the ball if it rolled off the court. “Because they just sprayed pesticide on the grass, and [the coach] didn’t want the team to be exposed to pesticide,” says Sheina Crystal, director of communications and campaigns for what would become Feldman’s and Gustafson’s student group, Herbicide Free Campus. “Bridget and Mackenzie were shocked.”

The then-students began looking into the use of herbicides such as glyphosate, an herbicide used to kill many varieties of unwanted plants or grasses. Exposure to glyphosate can cause nausea, vomiting and skin irritation. In 2015, a working group from the World Health Organization determined that glyphosate was likely carcinogenic to humans, although that has been disputed. Either way, some jurisdictions ban the use of glyphosate, and neither Feldman nor Gustafson wanted it used on their campus. They applied for a grant to bring in an organic horticulturist to work with the Berkeley staff and grounds team, and launched a project to transform the lawn care into a herbicide-free system.

Today, about 95 percent of UC Berkeley’s campus is managed organically, and the herbicide-free movement has grown—first through universities in California and then across the country. Now, the group brings on about 20 student fellows every year, guiding them through the same processes to make changes on their own campuses. This summer, the organization joined  Leonardo DiCaprio’s Re:wild organization, adding new branding and an expanded team to help in their mission. (The organization is now known as Re:wild Your Campus, in line with the Re:wild style.)  Feldman and Gustafson, now graduated with degrees in society and environment and molecular environmental biology, respectively, have stayed on to run the organization as founding members. They also have help from a team of board members, including members of Food & Water Watch, Greenpeace and Adobe, among others. 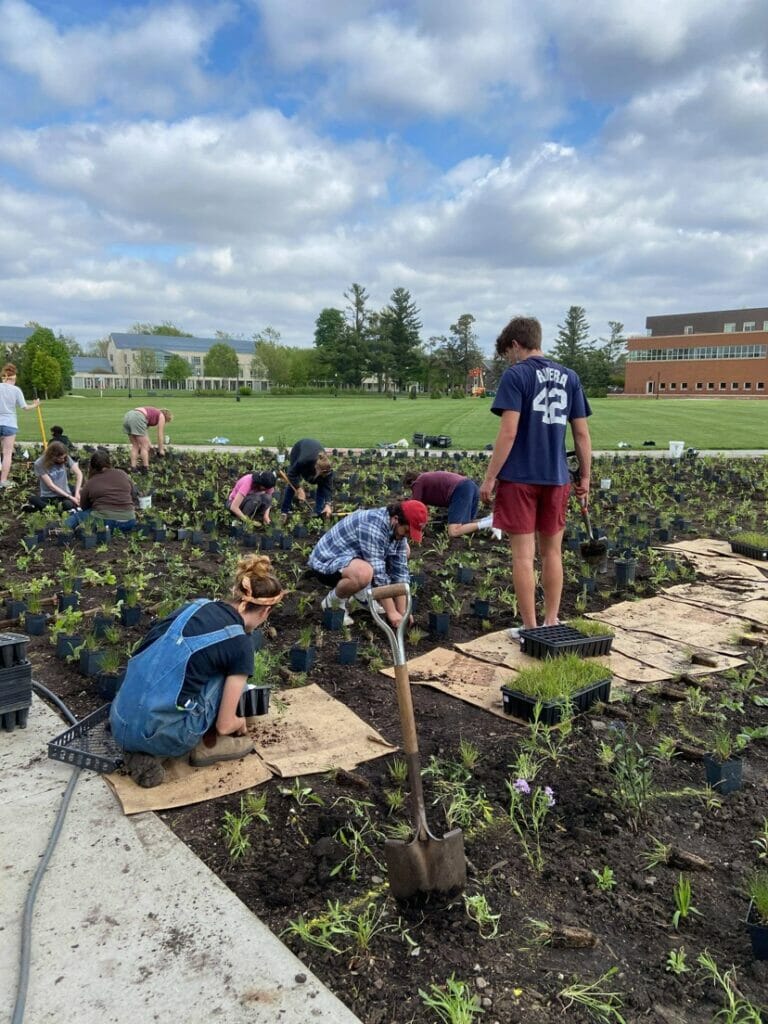 Working with student fellows always starts with the basics: Talk to the grounds team at the school. “We don’t want students on campuses just telling groundskeepers that they have to abandon all the tools in their toolkit without receiving more support from the school or more funding,” says Crystal. Instead, the team aims for a collaborative effort, attempting to get staff and students involved. “Students go meet with the grounds teams to try and identify what’s being sprayed on campus and why. They can identify the key roadblocks to the campus going organic.”

Often, says Crystal, the roadblocks come down to money. Grounds teams are often understaffed and overworked, and they don’t have the resources to hand weed or invest in other equipment. In that case, the students can start applying for grants and funding, as well as pushing the administration to take a second look at the planning. In many cases, the finances actually work out for the better. “We had student researchers sit down with groundskeepers and sustainability professionals at eight campuses across the country that are spearheading the organic transition,” says Crystal, “and the data they collected shows that organic management is actually not more costly in the long run. There are upfront investments, but, overall, all schools have seen cost savings from transitioning away from synthetic chemicals.”

Sometimes, the roadblocks come in the form of aesthetics, where administration doesn’t see how campuses can look as beautiful with organic practices. In that case, students work to connect the grounds team with horticulturalists and experts to talk about the efficacy of organic practices. There are a multitude of steps that the students take, and they have successful, active campaigns at seven campuses, including Sarah Lawrence College, Brandeis and Loyola Marymount University.

Of course, there can be pushback. “There’s a huge misconception that if you’re managing the lawns on campus without synthetic chemicals, they won’t look the same…And the groundskeepers are the experts. They’ve been doing this work for a long time. But the education that groundskeepers receive is very much rooted in conventional reliance on synthetic inputs,” says Crystal. The student fellows work on walking that line carefully; respecting the experience and education of the staff, while also campaigning for change.

So, why the lawn? It’s not hard to find a cause to fight for on a college campus. Why focus on the grass? “It’s a really tangible place to plug in,” says Crystal. This is a cause in which the results of the work are visible immediately, which is especially important in a group with the high turnover rate of college students. “You can actually see a real, tangible outcome,” says Crystal. “[You can see that] this part of the campus is no longer sprayed or this part of campus has been transitioned back to prairie grasses and this part is totally organic. Having those small wins is really empowering, and it makes students feel really good about their work.”

It also touches on so many things that college students might explore during their time on campus: their own health, environmental health, future planning. For these students, this literal grassroots campaign shows just how big of an impact they can have in the world—a vital lesson for someone of any age.

Let’s remember what happened the last time someone tried to stop using “poisons” and use environmental friendly methods:
https://eelegal.org/calepa-building-has-a-rat-infestation-catch-and-release-isnt-working/

More propaganda from primitive farming. That college students are this ignorant is a reflection of just how bad education regarding farming is on many campuses. The bigoted author of this pathetic puff piece ignored the basic science behind pesticides. the usual fraud done by the iarc is, of course mentioned. https://www.acsh.org/news/2017/10/24/glyphosate-gate-iarcs-scientific-fraud-12014

This article’s discussion of pesticides, insecticides, and organic applications is misleading. Organic treatments all fall under the definitions of pesticides, herbicides, and insecticides. Just because a treatment is labeled “organic” (or is OMRI), doesn’t mean it is completely safe for animals and humans immediately after application. ‘Organic’ pesticides still require appropriate personal protective equipment and reentry intervals protocols. For example, popular organic treatments such as pyrethrins are broad-spectrum pesticides that an applicator shouldn’t be handling without PPE and it kills beneficial insects too… I’m really disappointed by Modern Farmer for publishing such a misleading article on an important topic. Articles… Read more »

Popular
7 Smokable Plants You Can Grow That Aren’t MarijuanaBrian Barth
How to (Actually) Get Rid of Fruit FliesEmily Baron Cadloff
What to Do With an Abundance of PeppersShelby Vittek
Yes, the Government Really Does Stash Billions of Pounds of Cheese in...Emily Baron Cadloff
6 Differences Between Llamas and AlpacasAndrew Amelinckx
Explore Modern Farmer
Related
Food & Drink, MTMF
Meet the Former Chefs Growing Restaurant-Driven Produce in Suburban AlbanyKerri Sullivan
Food & Drink
‘Tis the Season For GleaningCrystal Sands
Plants
This Seed Detective Travels the World Tracking Down Lost CropsEmily Baron Cadloff
Environment, Plants
Making the Case for IntercroppingShea Swenson
wpDiscuz
We use cookies on our website to give you the most relevant experience by remembering your preferences and repeat visits. By clicking “Accept”, you consent to the use of ALL the cookies.
Cookie settings ACCEPT
Privacy & Cookies Policy