These kelp and shellfish farmers are breaking down barriers in aquaculture and helping to pave the way for the next generation. 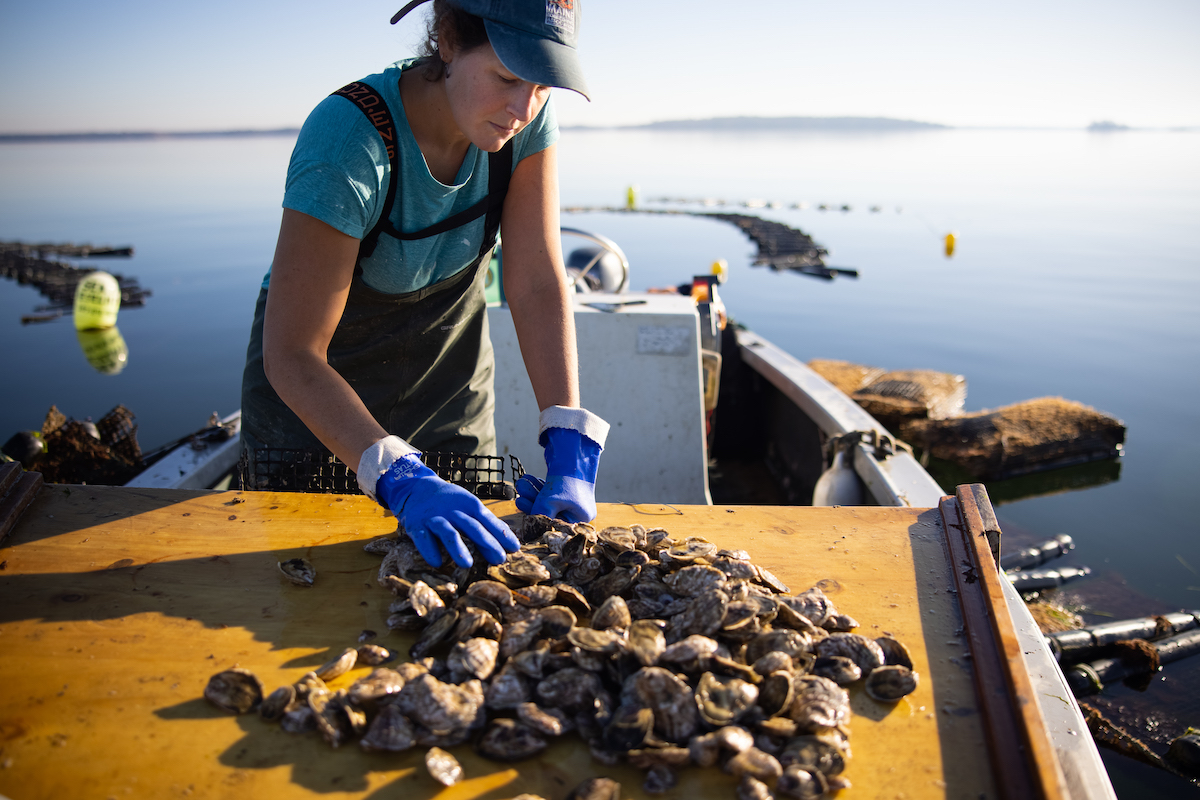 It’s 11:50 am on a steamy day in Biloxi, Mississippi when we break for lunch at the Oyster South Symposium. I head to the bathroom before grabbing food. Next to me, Deborah “Oyster Mom” Keller washes her hands. “When there’s a line at the ladies’ room at these events, I’ll know we’ve arrived,” she quips.

She’s right. Bars, restaurants and concerts all have snaking lines of women waiting for a spot in the restroom but not at aquaculture events—that is, not yet.

At 6:30 am on a windy April morning, surrounded by tumultuous seas, Stonington Kelp owner Suzie Flores calculates how much seaweed to take off the line as she motors out to her sugar kelp farm, located 40 minutes offshore on the Connecticut side of the Long Island Sound. “Yesterday, we brought up 100 pounds,” she says. “Next comes packaging it for orders, tagging it and putting it into refrigerators. Then the paperwork starts. I have a harvest log to fill out detailing how much I took off what area.”

The kelp farmer also drops her product off to restaurants far and wide. “I don’t have somebody willing to come down and buy all my seaweed in one purchase on the dock. We don’t have that scale of infrastructure [in Connecticut],” she says. Not tallied in those tasks is the time she spends educating new chefs about her product, on phone calls to market sugar kelp and extolling seaweed farming’s environmental benefits to anyone who will listen. 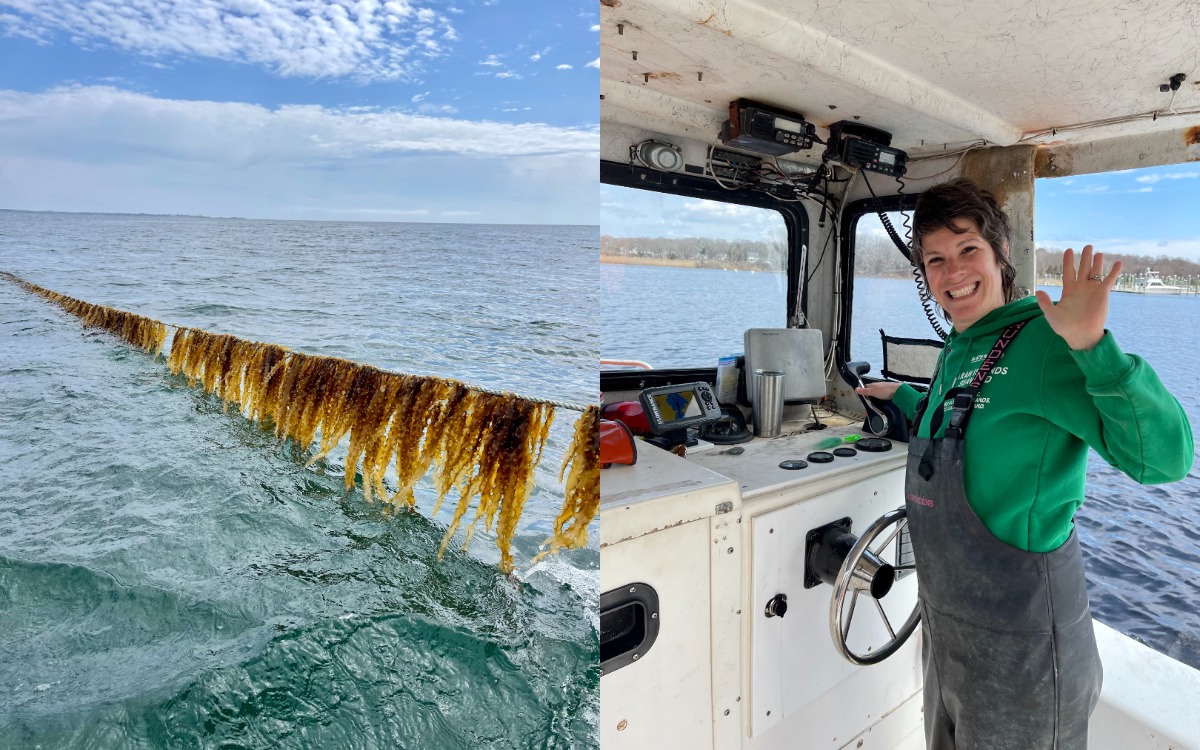 Flores is an anomaly in the larger story of women in fisheries and aquaculture. According to FAO figures, of the nearly 60 million people involved in the primary sector of the fisheries and aquaculture industry, only 14 percent are women. But, if you look at secondary roles such as accounting, processing and marketing, women’s participation balances out. They occupy direct-harvesting and decision-making roles the least. Because most data aggregated on the industry correlates to harvest-specific operations, women’s participation in the value chain, largely constrained to pre- and post-harvest roles, becomes invisible.

RELATED: The Future of Ocean Farming

Beyond weather and physical labor, childcare—especially during the pandemic, when so many children were schooled from home—became another issue that Flores had to  juggle. With her husband James occupied with dangerous barge work out of their marina, their kids accompany Flores on the boat when they can’t go to school. “It feels like a uniquely women-like thing where I said, ‘Hello, come to my farm, but also there’s going to be a five-year-old and a seven-year-old running around,’” she says.

Briana Warner, CEO and president of Atlantic Sea Farms, supports kelp farmers like Flores just a couple of states up in Maine. She leans on her background in economic development and experience as a diplomat in the Foreign Service to navigate the changing waters of aquaculture. For Warner, the draw to this industry came from a desire to help communities reliant on the blue economy adapt in the face of climate change.

And Atlantic Sea Farms’ model works. It supplies seed, harvest bags, guarantee purchase of product, pickup at the docks and provides trucks to run delivery and all the logistics. It then uses the kelp to make edible products such as fermented seaweed salad, kelp smoothie cubes, kelp kimchi, kelp and beet sauerkraut and a soon-to-be kelp burger. The farmer’s job, says Warner, “is to plant kelp and farm it excellently.” 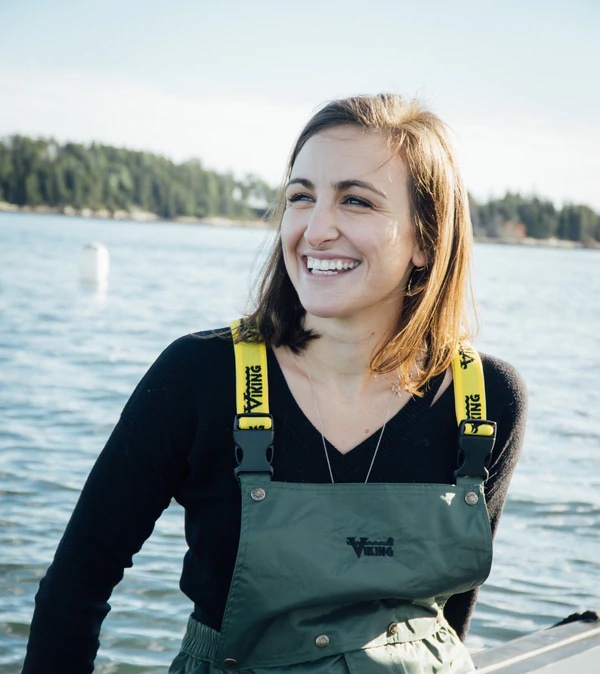 Even though diversity is not where she wants it to be in the industry as a whole, Warner’s organization features it on every level, starting with herself. “Our board is three women, two men. Our supply manager, the one helping farmers set all their gear, do their lease applications, [running] our farming network, is a woman,” says Warner.

A recent job posting for an ocean farming technician yielded 15 applications, 13 of which were from young women. Warner believes we’re at a tipping point for gender diversity in aquaculture and maybe automation holds the key to countering some of the physical barriers. In Canada, for instance, parts of salmon farming are becoming less about physical strength and more about automation, narrowing the gender gap.

“I went to a brewery last week and this young woman came up to me. She said, ‘What you guys are doing is so inspirational. You’re showing women what they can do,’” says Warner. “And I thought that’s not what I’m doing this for. I’m doing this to help fishermen diversify in the face of climate change.” And yet, through her example, young women everywhere are seeing that they, too, can lead in the aquaculture industry.

Like kelp, oyster farming helps the environment by filtering and sequestering carbon. But the autonomy of the industry is what drew Selinger in. “I realized the happiest place for me is calling my own shots,” she says. “While I have arguably more work to do in my daily, weekly life running this business, there’s none of the stress and tension of those really intense male-dominated work environments. There’s some sense of competition on a broader scale among our oyster farming industry, but at the same time, I’m not competing to make myself feel as good or as strong as coworkers or male counterparts.”

The specific challenges some women face while hauling and tumbling large oyster bags complicated Selinger’s plan, but she adapted. “Using cages and heavy equipment doesn’t work for my body. I had to downsize everything. I use floating bags. I work in shallow water at low tide and get out of the boat,” she says. 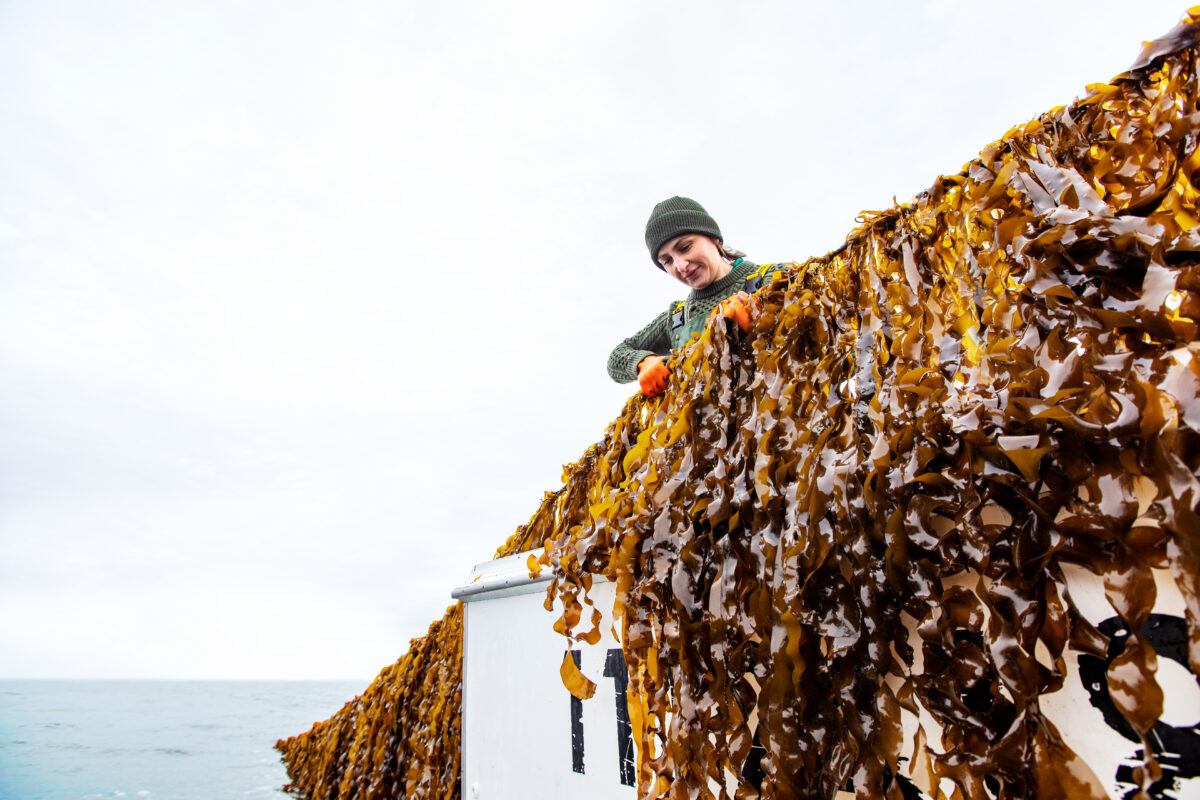 Beyond equipment built for men, the 2020 United Nations State of World Fisheries and Aquaculture report outlined the need to “improve access to credit, finance and insurance…in particular for women entrepreneurs and operators from disadvantaged groups.” Like gear designed for a male-dominated industry, financial backing remains a barrier to equity in aquaculture.

Moving down to Florida’s Forgotten Coast, Deborah Keller works out of Oyster Bay. She came to farming later in life after a 29-year career in major donor fundraising and government relations with the Nature Conservancy. “My husband has his own business, so it was me and a boat I bought off Craigslist that I didn’t know how to drive,” she recalls. “I’m a Pennsylvania girl, thrown into the Gulf of Mexico on a Carolina skiff out there in all kinds of weather, learning the current and tides.”

Keller offers space on her leases for burgeoning farmers to plant seed and test the waters of the aquaculture industry, as well as speaking at local Chamber of Commerce events and schools to promote women in aquaculture.

Off Florida’s Atlantic Coast, in an area known as the Treasure Coast, Nicolette Mariano owns and operates one of just two oyster farms on that side of the state. The Indian River Lagoon, where she farms, serves as a nursery for everything from lobster to fish to bull sharks to dolphins, but hurricanes and human impact decimated the seagrass that affords structure for birthing and protection from larger predators. Her oysters help rebuild that habitat.

RELATED: Can Oyster Farming Save the North Carolina Coast?

Mariano, decades younger than anyone working around her, says, “It took over a year for the guys around here to stop asking me if I’d given up yet.” And giving up is not in her nature. After getting her operation off the ground, Mariano realized she needed to start processing her own oysters. The four-hour drive across the state to the nearest facility ate up time and gas that could instead be spent on the water.

“I’ve never wanted to be behind a microscope or in a cubicle compiling data. You’re always seeing something new out here. Last year, I found juvenile spiny lobster in our gear. I’ve seen them in textbooks, but never in the water,” she says. That drive for new experiences coupled with work that restores the estuary on which she grew up keeps Mariano grinding. 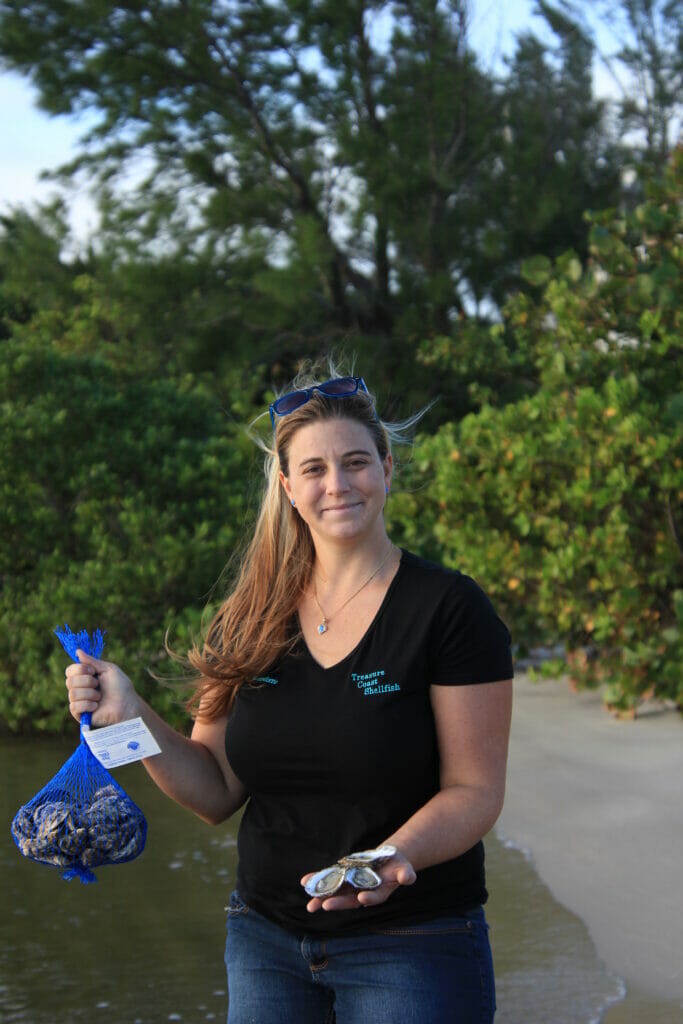 Across the state in Cedar Key, Leslie Sturmer got into aquaculture in the 1990s to help displaced fisherfolk find viable careers on the water. Sturmer, a Sea Grant agent for the Big Bend, took a position in retraining programs that introduced fish farming to fishermen put out of work due to regulations.

The infrastructure provided by those federally funded programs launched the aquaculture industry on Florida’s west coast. The University of Florida created an extension position to support the new clam industry and Sturmer still occupies that spot today. On the weekends, though, she works the clam farm she took over after her husband passed away five years ago.

While there are husband-wife teams on the water, she remains the only solo woman clam farmer in Cedar Key. But through her work with the Florida Sea Grant, she sees more women like her entering the field. “The National Shellfisheries Association is dominated by women and they’re doing excellent research. It’s amazing seeing all these young women getting into the business,” says Sturmer. 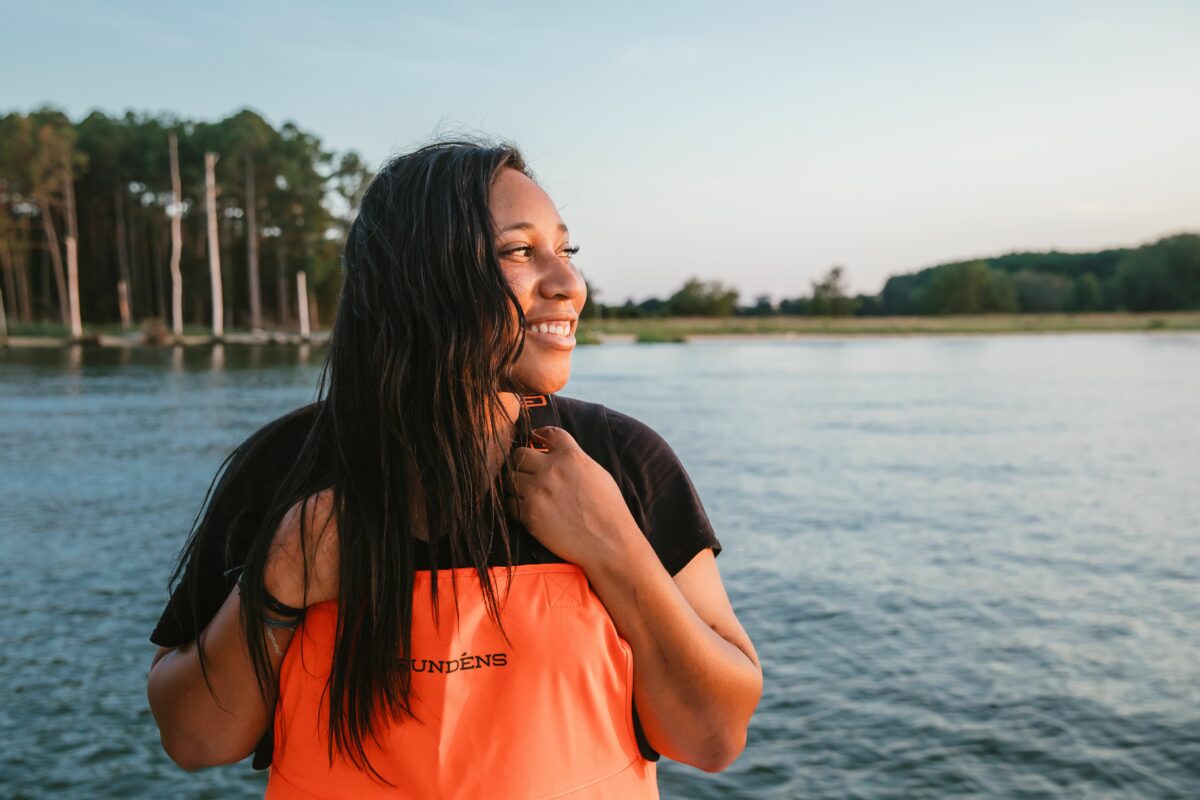 Not only is it important to see a better representation of gender in aquaculture, but racial diversity matters, too. Representation poses the biggest challenge to Imani Black’s Minorities in Aquaculture members. Black started the nonprofit in 2021 to support and empower minority women who faced barriers in aquaculture because of gender and race.

“You can’t care about something you don’t know about. Seeing yourself in a career and how you fit into that industry creates the spark,” says Black. “We’re in a really good space to be intentional about internships and opportunities for women that are economically viable. It can’t just be checking a box that we have a diversity inclusion curriculum or a diversity statement.”

Black finds hope in the community with which she’s surrounded herself. “There’s so many badass women in aquaculture right now making a path for others. We’re owners, farmers, out in the field, in the hatchery, making an impact on the industry,” she says. “When all women in aquaculture come together, we can be so powerful.”