The war in Ukraine has upended global markets, causing staples like wheat and sunflower oil to spike. How is the American government responding? 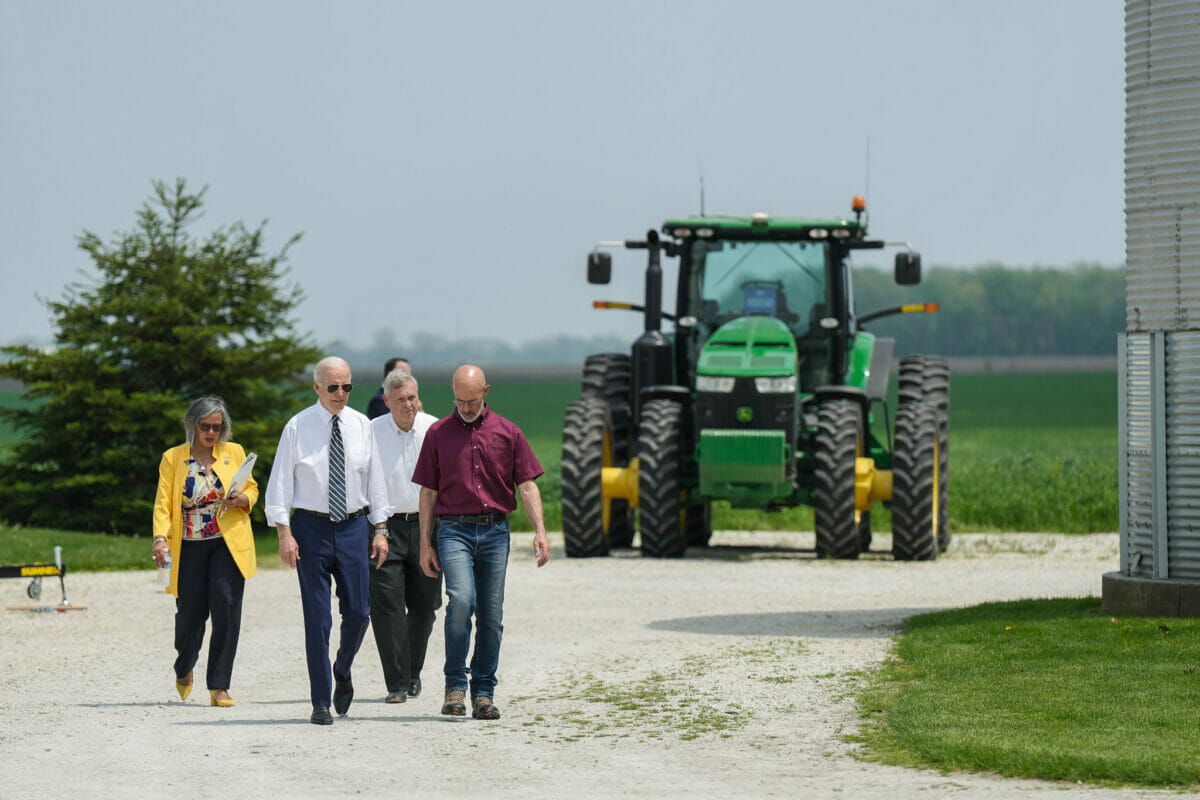 On an Illinois farm Wednesday afternoon, President Joe Biden asked American growers to double crop—planting a second crop in the field after the first one is harvested—this season in an effort to buffer against food insecurity caused by the war in Ukraine, especially when it comes to wheat sources.

“The growing season for wheat is short, and if the weather conditions aren’t ideal or there are other disruptions, then the timing of everything is thrown off,” said Biden. “But it’s a risk we need to take.”

The goal is to increase US production without cultivating new land. But double-cropping isn’t without its risks. For one, it can deplete soil of valuable nutrients, which is risky when the US already faces a fertilizer shortage. To that end, Biden announced $500 million in funding to increase fertilizer production.

Double cropping can also be risky in the same way that planting any crop is risky. You have to be prepared should the crop fail. To help producers there, the administration also announced that it would open up double cropping insurance to 1,935 counties.

Extending crop production throughout the United States can help add resources to the global supply of food, as well as temper global prices. As Christopher Barrett, an agricultural economist at Cornell University, explains, the war in Ukraine has disrupted global food supplies in three key ways. There’s the fall harvest that is still sitting in warehouses and silos, not able to leave the ports along the Black Sea because of the Russian invasion. There’s a disruption of current crops, such as winter wheat. And there’s the potential disruption of future planting.

“What gets planted now might not be harvestable in fall, if suddenly areas that are cultivated today are war zones in five months’ time, or if there’s not the labor to bring in the crop in four or five months’ time.” And that’s where an increased supply, through double cropping in the US, comes into play. More resources can prevent supply shocks, if available crops from Ukraine are pulled off of the global market. They can also help smooth out price fluctuations by calming “people’s expectations of what’s going to happen,” says Barrett. “That can bring prices down now.”

RELATED: What the War in Ukraine Means for US Agriculture

The double cropping strategy comes on the heels of other measures that the US has taken to address food insecurity. Some groups have donated money, such as the National Farmers Union (NFU), which in April pledged $125,000 in humanitarian aid. But the American government’s approach is by sending food—roughly $282 million worth of food.

The USDA and the USAID withdrew the $282 million in funds from the Bill Emerson Humanitarian Trust, which will be used to purchase American-grown crops and redistribute them to countries heavily impacted by food price increases in the wake of reduced availability of certain crops. The US sent cargo freight of American crops to people in need in places such as Yemen, South Sudan and Ethiopia.

However, it costs a lot to get American food to those countries. The administration spent more on transportation costs—a total of $388 million—than it spent on the actual food. “This is like if you’ve got a friend who’s at home sick and quarantined, and you want to send them a meal,” Barrett says. “You want to send them a $20 meal, but there’s a $30 delivery charge.”

The increased costs of transportation are partly due to rising fuel costs, but mainly because of what many describe as outdated regulations around how the US can offer food assistance and how it must be shipped. The US’s food aid laws came into effect in 1954, mandating that at least half of all food aid sent overseas be shipped on US-flagged vessels. This has led to holdups and increased costs, as only certain cargo ships and freighters are able to carry donations. Research shows that shipments are routinely delayed by months, and up to eight million of the world’s poorest populations are denied help, because those costs are going to shipping instead of aid. That research also suggests that the US overpays on shipping costs to the tune of $50 million annually. Not only that, but the food we’re sending may not go as far as it should, often spoiling before it arrives. Sending cash to buy local food, grown closer to the areas where it’s needed, is often of bigger benefit to the people in need.

RELATED: One-Third of Ukraine’s Farmland Won’t Be Cultivated or Harvested This Year

There have been calls to update the US’s cargo and food aid laws. The NFU asked for restrictions to loosen in 2013. There’s also bipartisan support to expedite food aid now, in the face of the war in Ukraine. However, the push to change these laws has never gained enough traction in Congress. Additionally, the shipping industry has access to a powerful lobby, as well as a strong will to keep these laws in place.

Could this humanitarian crisis in Ukraine be the tipping point? Earlier this week, Biden described American farmers as “the breadbasket of democracy.” However, Barrett cautions that we’ve been down these roads before. “This might be a tipping point, perhaps,” he says. “But be careful about underestimating the influence of lobbyists.”

If Joey and his regime handle this like they are handling the widespread baby formula shortages and the unceasing rise in gasoline/diesel prices, which started once Joey came to power, we’re likely to starve. The food would go to foreigners first, Americans last, like everything else that’s come from Joey and his regime.

How about allowing farmers to temporary plant a crop on Conservation Reserve acres. Would probably increase production more than double cropping in areas not currently doubled cropped.

When states like Iowa, which has almost 13,000,000 acres in commodity corn, direct 57% of their total corn production to ethanol, it undercuts the myth that these farmers “feed the world” or that the situation of production shortages is that dire. Human food makes up a much smaller percentage of total crop production than most… and this includes President Biden… seem to recognize. Ethanol, plastics, etc. are some of the main end uses for America’s industrial agriculture production. What’s needed is better Agriculture land use policy. As for the stated increase in “fertilizer production,” let’s keep in mind that this… Read more »

Screw the world this is the USA . We have our own issues. I tired of giving and never having enough . Think Americans first. What about meat , food , our own defenses , had enough just barely tread water now .THINK AMERICA AND AMERICAN MADE.