Farming on the Spectrum - Modern Farmer

Farming on the Spectrum

In the middle of Chicago, a one-acre plot is dedicated to changing lives, one student at a time. 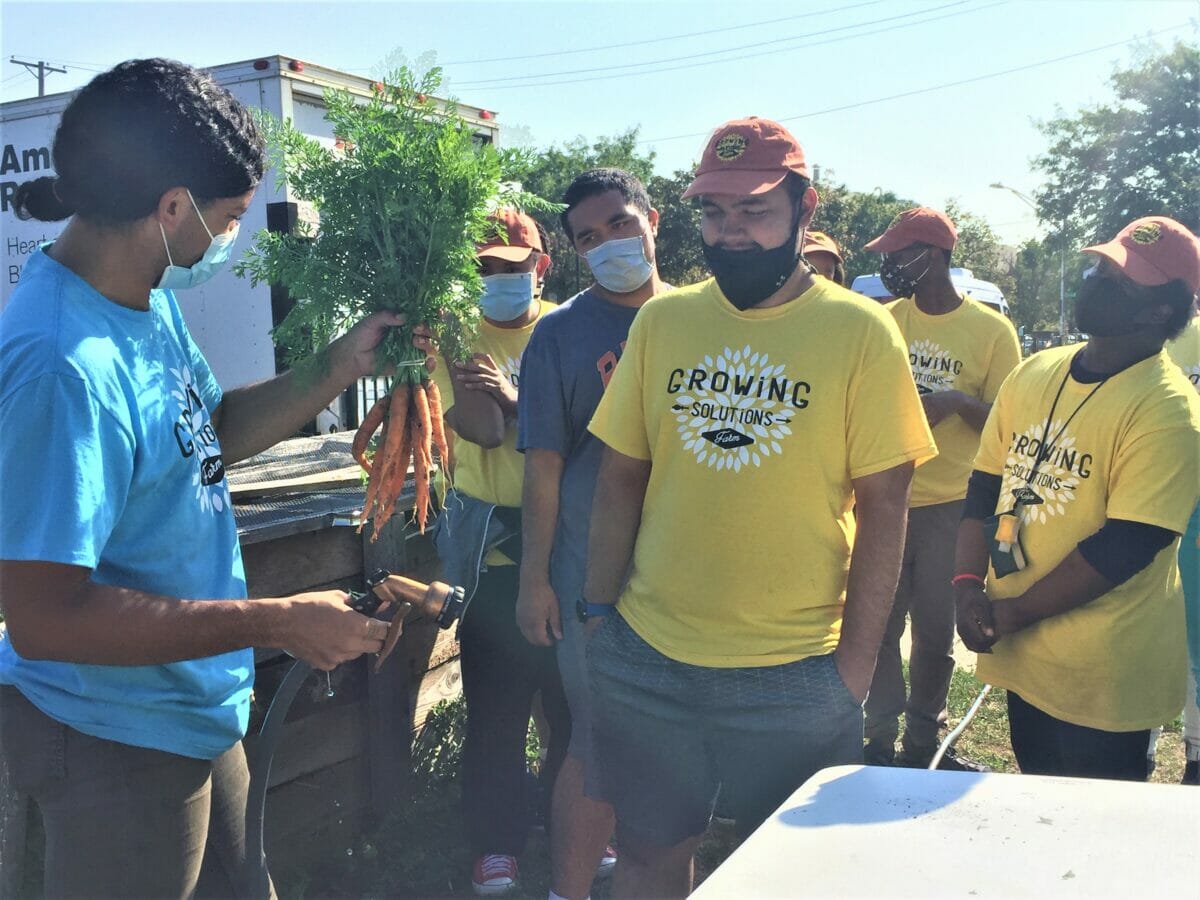 Everyone wants to hand water the plants. There are dozens—hundreds—of individual tasks that have to be done on a farm at any given time. But at Growing Solutions in Chicago, everyone fights over the hand watering.

Why is that the most popular chore? Maybe because it’s just not a job that needs doing more than once a week or so, which makes it a bit special. Or maybe because watering by hand requires a delicate touch. You must know when a plant is saturated and when it’s flooded, when the direct pressure is too much for a still-growing shoot.

So it’s a task that Tucker Kelly doles out with care, although they do everything at the farm with care. As operations manager, Kelly puts thought into every aspect of the farm. Farmer Tucker, as they’re sometimes called, has to. The farm’s students are on the autism spectrum, and so everything from the spacing of the plants to the choice of crops to the job assignments is meaningfully planned out. Ultimately, what matters most at this farm isn’t the yield or the harvest but the experience of the students working it.

“The secret is it’s not about farming, even though it’s all about farming,” says Kelly, who’s interested in passing skills on to the students that go far beyond agricultural work. For instance, it’s important that the students learn how to properly wash the produce after it’s harvested. But Kelly sees it as an all-around life skill that encompasses food safety and sanitation. “If you learn how to properly clean, harvest, package and sell the produce, you can work at a farm, but you can also work at a grocery store. You can work at Home Depot with those sorts of skills, you could work at a restaurant… There’s a number of different jobs you can get just because I taught you how to properly wash produce. And, hopefully, we populate their résumé with useful skills that are transferable anywhere.”

[RELATED: These Four Farms Pair Agriculture with Autism for a Winning Mix]

A 1.2-acre farm located in Chicago’s Illinois Medical District, Growing Solutions is an arm of Urban Autism Solutions (UAS), a nonprofit that helps young adults with autism by offering programming, classes and residences that meet their specific needs. On the farm, that looks like wider aisles that allow for more room between people and plants and crops that cater to the participants’ abilities. “Dexterity is a pretty severe concern. For example, berries like raspberries, or blueberries, grapes, they’re just really difficult for students to pick off,” says Kelly, who also notes that color-blindness and vision problems are relatively common among people with autism, so they always check to see how well students perceive colors. That will tell them if a student is suited to pick tomatoes at peak ripeness, for instance.

“What’s so cool is that the young adults and the students that we’re bringing to this program—all have an equal playing field. Nobody has urban agricultural experience, and everybody’s getting their hands dirty. Everybody’s sweating, and everybody’s out in the sun together,” explains Heather Tarczan, executive director of UAS. 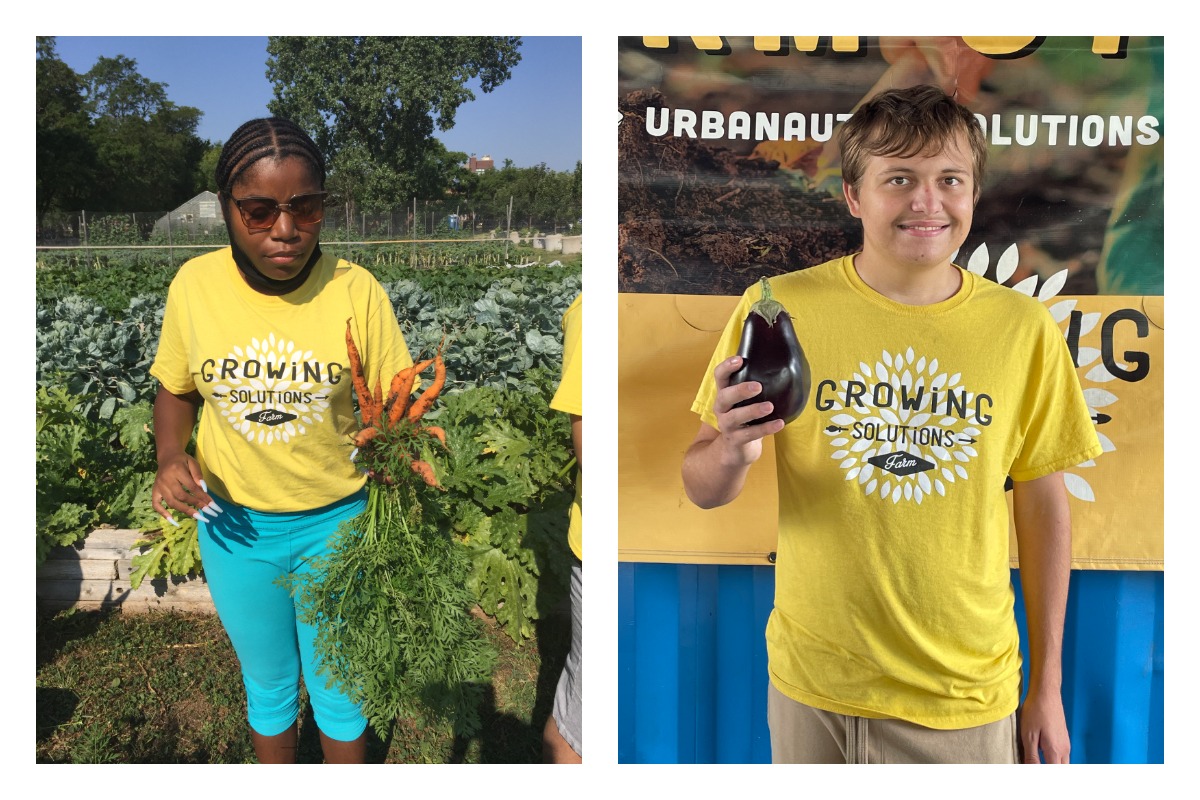 That can mean a lot for these students, most of whom live on the west side of Chicago, an area where more than half of families live at or below the federal poverty level. Not only do students live with autism but, often, Tarczan says, their schools are also underfunded. “They don’t have access to the same clinical services that other zip codes have access to, and that includes speech and language, social work and occupational therapy,” Tarczan says. Urban Autism Solutions built all of those services into its programming in an effort to teach “these young adults different transferable job skills, have them work on their communication skills, work on working together, graduating into independent tasks.”

The farm’s added benefits include introducing students to a variety of new foods, and it allows them to take fresh produce home to their families as well. “If a student asks for tomatoes, I make them go pick them,” Kelly explains. “We want these students, who otherwise might be buying everything that they eat out of a corner store, something pre-packaged…we don’t want to be a barrier to [them accessing] fresh food. Please take it home.” Growing Solutions also donates about 20 percent of its crops to local food banks and operates a CSA program, where local residents can sign up for a farmshare. They also run a farm stand at a local market, giving students the opportunity to interact with customers, bag groceries and help with the business side of running a farming operation.

[RELATED: This Urban Farm Is Small But Mighty]

One of Kelly’s goals this year is to expand the sensory garden within the farm. It’s a quiet area filled with plants that people are invited to touch and smell, which has been a big hit with visitors. “They like the lamb’s ear and [plants such as] alchemilla. When you get water on the top of it, it beads up really nicely. It’s a highly interactive part of the farm,” Kelly says. When new visitors stop by the sensory garden, Kelly often introduces them to plants with a quick trivia question, by muddling up an herb such as sage, lavender or basil in their hand. “What I often ask is ‘what room in your house would you find this?’ Basil is in the kitchen, obviously, lavender in the bathroom, sage in the living room, if anyone uses potpourri.” It’s one way of bringing students into the inner workings of the farm and getting them excited about the work they’re doing.

Urban Autism Solutions celebrates its 10th anniversary this year, and it hopes it will be able to ramp up its offerings after a quiet few years working around COVID-19-related restrictions. At just over an acre now, the little farm has an outsized impact on the community, and Tarczan would love to see it grow even further. In the past few years, UAS nearly tripled its programming, and Tarczan hopes to hit another growth phase this year. Part of that growth could come from partnering with other community organizations and having students act as de facto ambassadors for the farm.

“Your most powerful form of advertising is word of mouth,” Tarczan says. “With the farm, the students are able to see something grow and be produced, and then see that it’s able to be sold. I think there’s a sense of accomplishment and pride. In doing a program like this, we’re seeing increased communication skills and self-esteem.”

I come from an autistic family, where both my brother and l, including both my sons are Asperger’s. I applaud you on what you are doing for my autistic brothers and sisters. This is the kind of project and commitment we, as a tribe, need to have established. Farming on the Spectrum, Modern Farmer, and Growing Solutions….you are helping to kick open the door of Autism just a little bit more. This is outstanding and our tribe and l thank you, love Michael.