The latest tech innovation to land in the fields. 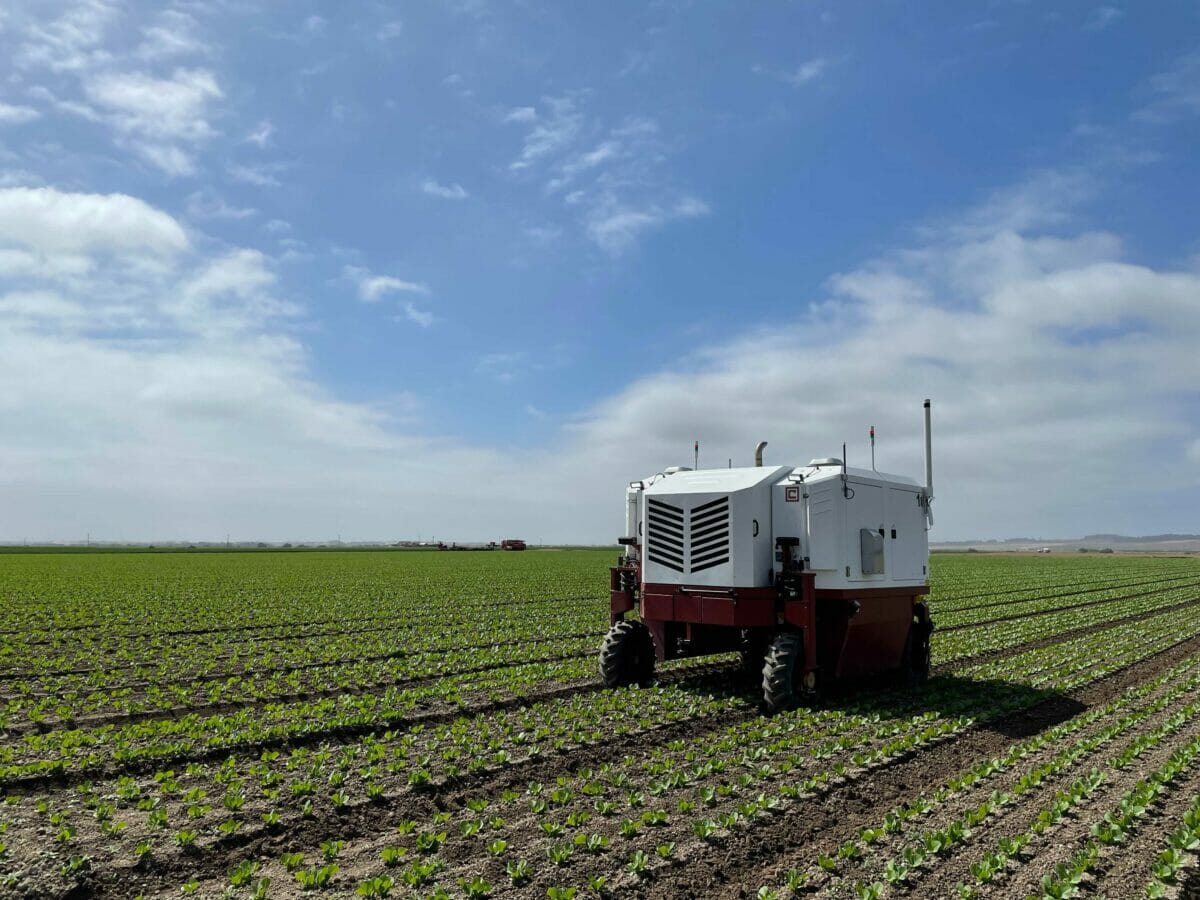 These 9,500-pound machines are said to zap around 100,000 weeds per hour.
Photography courtesy of Carbon Robotics.
Share
Tweet
Pin
Email

James Johnson has witnessed the wrath of industrial agriculture. For decades, he and his family used fertilizer, herbicide and pesticide to achieve optimal yields on their 3,100-acre farm in New Mexico. And it all finally caught up with them.

“It was like we had 40, 50 years of success and then suddenly we plateaued and started falling off this cliff,” he says. “I started to look at what we were doing and realized most of it was self-inflicted. We were hurting the biology…and a huge amount of our budget was going towards chemistry.”

In an effort to regenerate the land and eliminate the need for chemical application, the fourth generation farmer—who grows onions, cotton, pistachios and peppers—has been experimenting with other options. One innovative piece of technology he’s been using? The Autonomous LaserWeeder, an automated machine that Johnson says has replaced the need for weeding fields by hand.

Since 2019, as part of a pilot project for the Seattle tech start-up Carbon Robotics (the company that makes the Autonomous LaserWeeder), the 9,500-pound machine has been traversing rows on Johnson’s farm. Rolling through the fields at five miles-per-hour with the capacity to clear anywhere from 15 to 20 acres each day, the machines use a combination of laser technology, GPS and artificial intelligence (AI) to kill 100,000 weeds per hour.

The machine’s lasers zap the weeds while the GPS, cameras and AI technologies allow the machines to be self-driving and help it differentiate weeds from crops. And because these gadgets use thermal energy to remove the weeds instead of physical intervention like tilling or chemicals, the company says the machine doesn’t disrupt the soil. The Autonomous LaserWeeder is powered by diesel and burns about 22 gallons in 20 hours, according to Johnson. 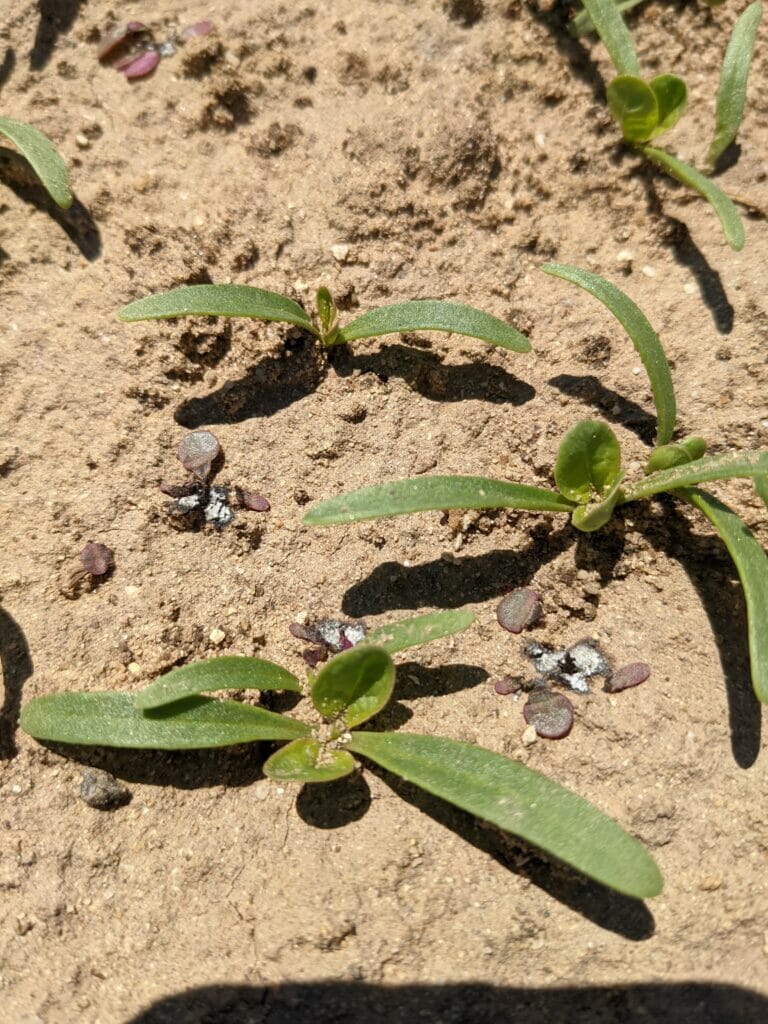 Farmers use herbicide on a majority of the world’s agricultural fields and globally spray enough to cover every acre of farmland in the world with half a pound of it each year. The introduction of the Autonomous LaserWeeder comes at a time when herbicides, and specifically active ingredients like glyphosate, are under scrutiny. A number of studies, for example, have linked glyphosate to negative environmental and public health impacts. And over the past two years, three court cases have resulted in multimillion-dollar verdicts for complainants who argued that glyphosate gave them cancer, like non-Hodgkin lymphoma.

Paul Mikesell, CEO of Carbon Robotics, says these problems have been at the heart of his motivation to develop a product that provides farmers with a better way to manage weed control. With enough robots trucking through pasture, he hopes to have a transformative effect on the food system.

“We can’t keep over-relying on chemicals,” says Mikesell. “I often think about how exciting it will be to get to the point where over time we can reduce the use of herbicides and pesticides for farmers and to be improving the human health side of things.”

Mikesell says it’s important to also consider the economic benefits of laser-weeding units. According to USDA data, crop inputs like chemicals, fertilizers and seeds make up roughly 28 percent of farmers’ total spending on average; and labor constitutes about 13.8 percent. From internal studies Carbon Robotics has conducted, the company found that the machines have the capability to save up to 80 percent in expenses on farms, helping to ease anxieties over finding labor, which has been a challenge for many producers, especially during the pandemic.

There’s clearly a demand for laser-weeding robots. The company sold out of its 2021 and 2022 Autonomous LaserWeeder models and has started taking pre-orders for 2023. While Carbon Robotics did not share exact pricing information, Mikesell says the cost is comparable to a mid-size tractor (which can range anywhere between $25,000 and $50,000). While the current model is designed for larger farms of 200 acres to tens of thousands of acres, Mikesell says there are plans in the works to provide an option for small-scale operations; that model will land in 2023 or later.

Carbon Robotics is the only business with a laser-weeding machine on the market at this point. But other emerging start-ups, such as WeedBot in Latvia, told Modern Farmer via email that there are plans to launch other laser-weeding models in the months to come.

Johnson, who is already well acquainted with the technology, believes it’s just a matter of time before laser-weeding robots become a staple on American farms. “It doesn’t matter if you’re a conventional farmer, a regenerative farmer, an organic farmer, everybody’s dealing with a struggle in weed control in some way,” he says. “Most people are looking for something better than what traditionally exists… I really see the writing on the wall that this is the future. And that’s one of the reasons that I’ve jumped in so wholeheartedly.”

First, I am not a farmer so perhaps my questions are misguided. My apologies in advance. Wouldn’t running a 9,500 lb machine up and down crop rows lead to massive compaction? Also, if you are concerned about the environment and quitting using pesticides and herbicides, isn’t using diesel power counterproductive? Don’t get me wrong, I love the idea but …