The Godfather of Fermentation Loves Your Pandemic Sourdough

In his new book, Sandor Katz explores fermentation traditions around the world. 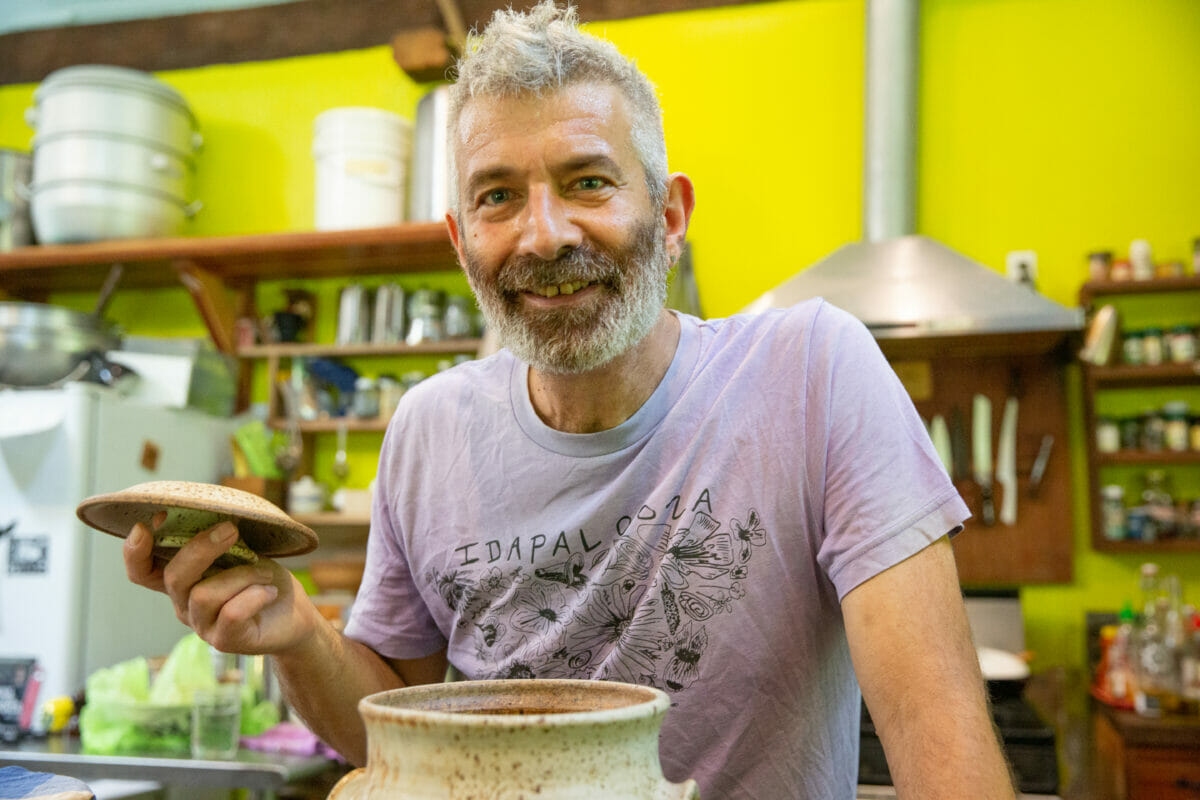 Sandor Katz is a self-described “fermentation revivalist.” (Seriously, it’s even his email signature.) He has studied, taught and practiced fermentation for more than 20 years. He’s written multiple books, including the 2012 James Beard Award-winning The Art of Fermentation. His love of fermentation has taken him around the world, as both a scholar and a speaker.

But why does he call himself a “revivalist?” Why not “expert” or “specialist” or even “chef” or “recipe developer”? Because, as Katz explains, fermentation has been around for as long as people have been eating and preserving food. “There’s all sorts of innovation in the world of vegetable fermentation, but the basic ideas of how you do it are ancient. I haven’t really observed anyone making up completely new concepts of fermentation,” Katz says.

Instead, he says that the world of fermentation is experiencing a “huge amount of cross-pollination and experimentation and diversification.” Take kombucha, for example, which is thousands of years old. While it’s not a new food, Katz notes that people are experimenting with different flavors or letting it ferment into an alcoholic beverage. And yet it’s all still a riff on the same ancient recipe. This is where Katz shines and where he can shed light on traditional techniques and offer up his own twist on them. 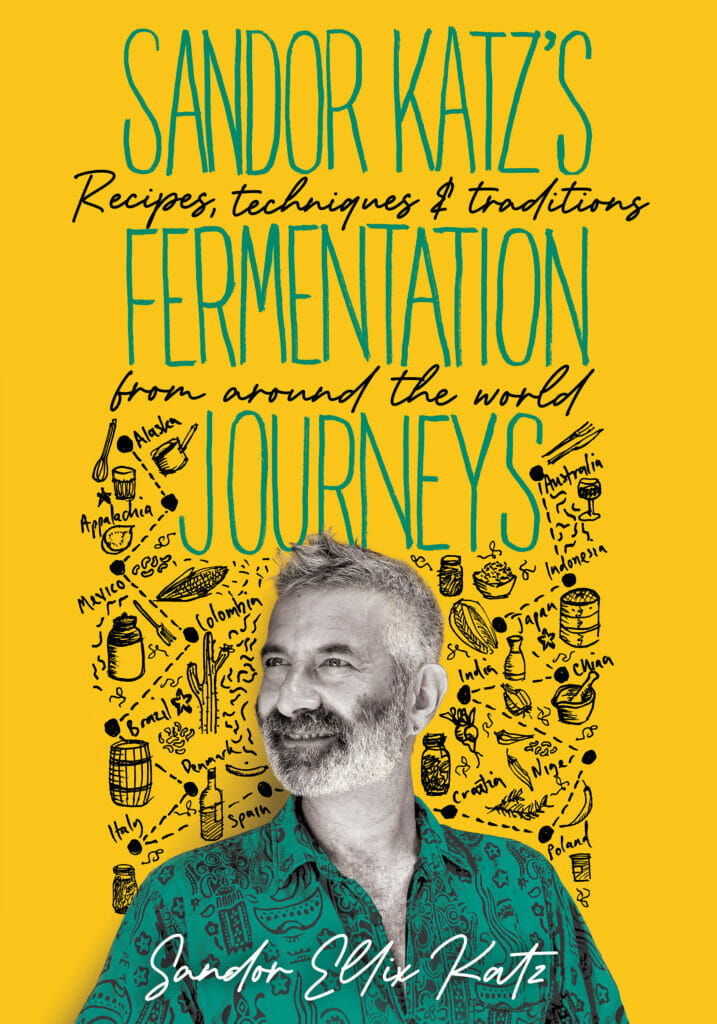 It’s this thread that links the recipes in his latest book, Sandor Katz’s Fermentation Journeys. Part cookbook, part textbook, part personal memoir, the book details not just how to produce fermented foods but how Katz’s own views on fermentation have expanded over the years. When he published his first book, Wild Fermentation, in 2003, it brought sauerkraut, miso and kimchi to mainstream American kitchens, starting a fermentation revolution in the process. Michael Pollan called him the “Johnny Appleseed of fermentation,” sprinkling bits of knowledge wherever he travelled. The book was a manifesto for a generation of home cooks and practiced chefs alike and served as a springboard for Katz.

Through that success, he was able to travel the world, talking more about fermentation along the way. With each talk he gave and every stamp he collected on his passport came the opportunity to learn a new recipe. “I’ve been invited to teach in so many different parts of the world, and hosts who wanted to show me how they ferment,” Katz says. “I’ve gotten to taste and see and learn about making a lot of food.” These travels informed his latest book. While he was always aware that fermentation was practiced the world over, he didn’t always have a clear view of the different styles or techniques of different regions. This new book tries to “give people contextual underpinnings for the fermentation concepts” found around the world.

That sort of global context is needed for fermentation, which is—yet again—having a bit of a moment. Or at least, some kinds of fermentation are popular now (Katz says he hopes that you stick with your pandemic sourdough and feed your starter!), but it’s not an inherently trendy way of cooking. In fact, the method permeates so much of what we eat in the western world, but it’s simply so normalized that we don’t recognize that bacteria and yeast are key to our lives and our plates. Fermentation isn’t just kimchi and sauerkraut, it’s also yogurt and vinegar and beer. “These are not fad foods, these are foods that have enduring popularity,” Katz stresses. “If we step back and look at fermentation in the expansive western diet, there’s coffee, bread, cheese, pickles, cured meats, condiments…all of these things we take for granted.”

In Sandor Katz’s Fermentation Journeys, Katz encourages us to reframe the western view of cooking, to highlight and celebrate global tastes and traditions. “Fermentation is an essential part of how people in every part of the world make effective use of food resources. It’s really integral to food traditions.”

Katz learned that himself when he first tried his hand at fermentation. In his 30s, he moved from New York City to Tennessee, and he found himself tending his first garden. It was everything a rural transplant could dream of, until his vegetables started ripening—all at the same time. “I was such a naive city kid. It never occurred to me that in a garden, all the cabbages and all the radishes would be ready at the same time.” Desperate to do something with his bumper crop of cabbages, he made sauerkraut for the first time. “It was so easy, and so delicious, so satisfying, that I just started playing around with it.” Thus began Katz’s own journey into fermenting, which he says is pretty common around the world. Now, he looks forward to turning something “fundamentally bland” such as milk into something tangy and tasty and more interesting.

For a beginner, Katz says this book is not going to provide a step-by-step guide to fermenting your first pickle (for that, try Wild Fermentation). Instead, this latest release is more of a log of fermentation itself—how it’s evolved and changed from place to place and the pleasure that can be found in experimentation. 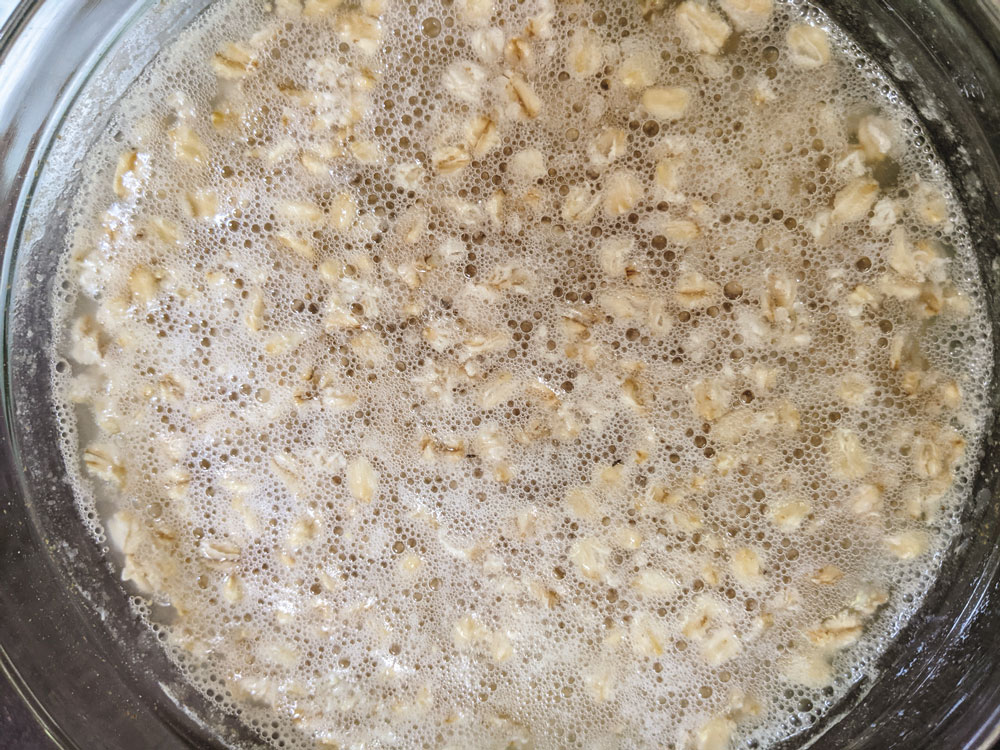 The following recipe is from Sandor Katz’s Fermentation Journeys by Sandor Ellix Katz (Chelsea Green Publishing, October 2021) and is reprinted with permission from the publisher.

The most fundamental technique for fermenting grains is extremely simple: soak them. Bacteria and yeasts are naturally present on dry grains, but they are dormant in the absence of water. This is true whether the grains are whole, cracked, or finely ground, so long as they are raw. As soon as the grains are soaked, the dormant organisms awaken and begin metabolizing nutrients and reproducing.

Porridges and gruels are among the most widespread applications of grain fermentation, found across all civilizations born of grain agriculture. Unfortunately, these traditional grain ferments have long been waning in popularity, eclipsed by baby foods, sugary cereals, and other processed foods that render porridges and gruels comparatively unappealing to kids, in spite of their vastly superior nutritive content.

At the University of Gastronomic Sciences (UGS) in Pollenzo, Italy, I was excited to meet Andrea Pieroni and hear about his ethnobotanical field work studying traditional foods of the Balkans. He subsequently sent me some of his papers to read, which were fascinating and informative, but also sad, insofar as one of the major objectives of his work is to document disappearing traditional practices. In one journal article, Andrea and a team of co-investigators include a list of the “most uncommon (and endangered) recorded preparations” among Eastern European traditional practices, with “gruels and sour beverages made of cereals” heading the list. “Fermented oat (Avena sativa) dishes were a popular component of the Eastern European diet,” they write, “but now are strongly declining.”

I love oat porridge and gruel. Porridge is thicker and more substantial; gruel is more watered down—thinner and soupier. They both feel so wholesome and deeply nourishing for me—all the more so when they have been fermented. Their nutritional profile contrasts sharply with the processed breakfast cereals that have become staple foods in the Western world and beyond, which are nutritionally deficient, high in sugar, and potentially harmful over time. These processed cereals are also high-profit products through which we transfer wealth to a few vast multinational grain-processing corporations, relying upon them and the infrastructure that enables them to exist for one of our most basic daily necessities, which they satisfy poorly.

Fermented oats have many different regional names. In Estonia, write Andrea and his collaborators, a beverage called kile was made of oat flour mixed with water; it was let to stay in warmth for a night. This filtered sour beverage was consumed instead of sour milk on the side of the meal. If the filtrate was boiled, it became a kind of gruel, which was also called kile, but also kiisel or kisla, and eaten hot with butter or fat or later, as a cold jelly. The boiling procedure took a long time at slow heat and required constant mixing; it had to meet an exact standard of sourness, otherwise it would not produce the required result. Similar gruels (also similarly named) were prepared from rye or from rye and potatoes. In Belarus, lacto-fermented gruel was called kisiel, but also a semi-liquid fermented dish from the oat flour was called by the same name. It was eaten with poppy or cannabis milk and is now, as in Estonia, recognized as a historical use only.

Inspired by this description, I began experimenting. And because my maternal grandparents, Sol and Betty Ellix, came to the United States from Belarus, I adopted the Belarussian name kisiel for this sour oat milk and porridge. Both the oat milk and the porridge that this simple fermentation produces are compelling in their deliciousness.

Timeframe
2 to 5 days, depending upon temperature and taste preference

About 2 cups/200 grams oats, rolled, cracked, or milled into flour
Pinch of salt

Soak the oats in about 1 quart/1 liter of water, in a loosely covered container.

Stir, smell, and taste the soaking liquid daily to monitor the evolving flavor. I’ve gone as long as 5 days, at which point I detected notes of coconut.

When you decide it is ready, strain the soaking liquid from the solids. Enjoy the flavorful and nutritious oat milk raw.

Transfer the soaked oat solids to a pot, cover with 4 cups/1 liter of fresh water, and add a pinch of salt. Bring to a boil, then gently simmer over low heat, stirring frequently to prevent burning on the bottom of the pot, until liquid thickens.

Enjoy your porridge with sweet or savory seasonings, as you prefer. (I love mine savory, with butter, peanut butter, miso, and garlic.)