Many producers were forced to leave their farms and farm animals behind. 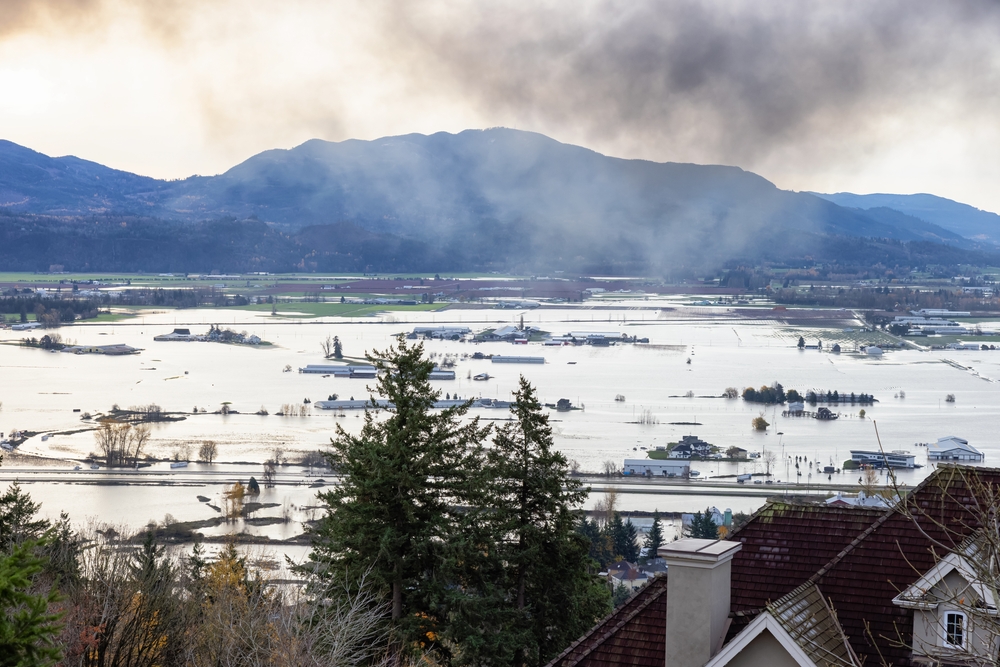 Over the past week, extreme floods and mudslides have sent regions of British Columbia and Washington State into an agricultural crisis. Reports of several thousand farm animals dying, many being trapped without access to food and water, and bungled supply chains have surfaced since torrential rain swallowed highways and forced farmers to leave submerged pastures.

According to The Guardian, some experienced about a month’s amount of rain in a matter of two days. Abbotsford, BC, one of Canada’s most intensively and diversely farmed areas, was significantly impacted. Photos and aerial footage documented farmers carrying their animals out of waterlogged barns. Some even resorted to using motorboats and jet skis as rescue methods. Abbotsford supplies half of the dairy, eggs and poultry consumed by the Canadian province’s population of 5.2 million.

Just east of the region in Sumas Prairie, one chicken farmer said he left 40,000 of his birds behind after receiving an evacuation order on Nov. 16. His farm is now sunk under six feet of water.

South of the border in Whatcom County, Washington, where the floods have been recorded as the worst since the 1990s, one farmer said his cows were isolated for 36 hours, which prevented them from being milked. On average, cows are milked twice a day.

Others who rely on rail service for canola meal to feed their cows were unable to access that product. The floods forced closures on the Canadian National Railway and Canadian Pacific Railway’s three main lines. In Deming, Washington, one dairy farmer, who has a contract to buy Canadian canola for $310 a ton, was scrambling to find a backup source. He found a supplier starting at $370 a ton, but he anticipates grain prices will continue to rise over potential shortages. He also had to dump about 4,000 pounds of milk due to shipment trucks being delayed on flooded highways.

While the companies are trying to sort through supply chain issues around rail service, it doesn’t seem the rain will be stopping any time soon. Environment Canada has forecasted as much as 40 millimeters of additional rain starting Monday, with up to 150 millimeters falling on British Columbia’s north coast.

Just a shame. Wish we could have taken the rain for those folks. We need every drop possible.

Related
Environment
Maryland Attorney General Sues Monsanto for Environmental DamagesDan Nosowitz
Environment, Plants
Will Hempcrete Ever Catch On?Judith Matloff
Food & Drink
Global Shortage Causes Québec to Releases Half of Its Strategic Maple Syrup...Dan Nosowitz
Environment, Politics
EPA Erases Trump-Era ‘Waters of the United States’ RuleDan Nosowitz
wpDiscuz
We use cookies on our website to give you the most relevant experience by remembering your preferences and repeat visits. By clicking “Accept”, you consent to the use of ALL the cookies.
Cookie settings ACCEPT
Privacy & Cookies Policy