The ancient meditation-based practice is said to be a sustainable way to improve crop performance, but the science doesn’t yet exist to back that up. 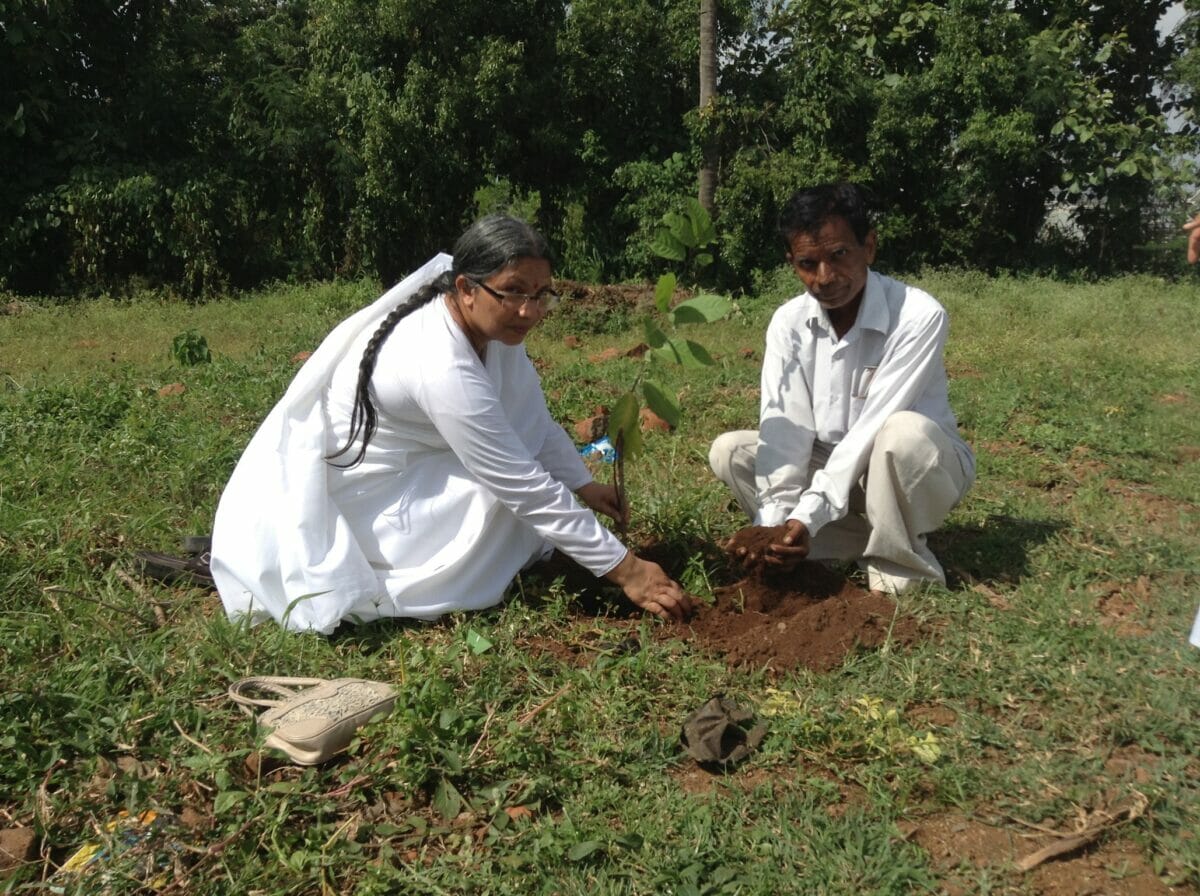 When Balaso Rugge first heard of the idea of yogic farming in 2003, he was skeptical.

“Initially, we laughed at the concept of farming through meditation,” says Rugge, an Indian farmer from the Western state of Maharashtra, “and thought it [was] impossible that it would yield results over scientific methods of farming. Today, thousands of farmers like me have adopted yogic farming, and we’ve seen miraculous results.”

Yoga and farming both share a deep connection with nature. And while yoga classes on farms—including goat yoga and chicken yoga—have grown in popularity in recent years, the term “yogic farming” has an entirely different meaning.

The little-known farming system originated from the Brahma Kumaris spiritual movement in India in the early 2000s. Yogic farming combines organic farming methods with meditation and relies on the power of thought to improve seed quality and increase crop yields. Multiple small-scale experiments conducted over the years indicate that yogic farming, in addition to being highly sustainable, can be cheaper than conventional farming and result in a better-quality crop output.

According to research published in Subtle Agro Ecologies by Janus Bojesen Jensen, yogic farming has been shown to increase soil microbial population and lead to germination of seeds up to a week faster than regular methods. Crops cultivated this way have also been found to have higher levels of iron, protein, energy and vitamins in comparison with organic and conventional farming methods.

The only peer-reviewed paper on yogic agriculture, published in 2015 in collaboration with two Indian agricultural universities, showed that tomato crops grown using yogic farming had more than 146 percent more Vitamin C than tomatoes grown using conventional farming methods. It also concluded that yogic farming was more than $330 cheaper per acre.

“Ancient cultures throughout the world have blended the spiritual with the physical…Yogic farming is the practical application of spiritual technology,” says environmentalist and anthropologist Tamasin Ramsay, former Brahma Kumaris representative to the United Nations. “It was introduced about 15 to 16 years ago, but the concept it is based on is ancient—thousands of years old.”

An advocate of yogic farming, Ramsay has also authored a report on the practice, highlighting 18 quantitative and qualitative benefits of the practice, including increased crop yield and increased nutritional content, faster and greater root germination and a reduction in emotions such as anger and frustration among farmers.

Thousands of Indian farmers have practiced yogic farming for decades, and they claim it has led to increased crop yield, higher resilience against pests and a higher level of nutritional content in the crops. Yet there’s still a lack of strong scientific evidence to back up the benefits of yogic farming, and a fair amount of skepticism surrounding yogic farming exists among scientists and environmentalists. In 2015, Indian agriculture minister Radha Mohan Singh recommended farmers take up yogic farming to “empower seeds.” Criticism ensued.

Anthropologist and agronomist Andrew Ofstehage, a postdoctoral researcher at Cornell University in the Global Development Department, says he’s skeptical about the seed trial evidence presented in support of yogic farming because of the small sample sizes used, the lack of long-term studies and the relatively small amount of studies conducted so far. “However, I also think seed trials and field experiments may be the wrong way of understanding the effect of yogic farming,” he says.“Why not ask the farmers what they think? I think that if the farmers think it makes a positive difference, then it probably is.”

Still, many believe yogic farming has an edge over conventional farming methods. Ramsay, the yogic farming advocate, recounts a tour in 2013 when she visited farmers in the state of Maharashtra, in Western India, and found they were struggling with insect infestations. “One farmer would go out to his field every night with his son and he would meditate upon the intention that his plants should be free of insects,” she says. Eventually, the insect infestation vanished. “Meanwhile, the next-door farmer had the same insects, and he had to use sprays because he couldn’t get rid of them.” 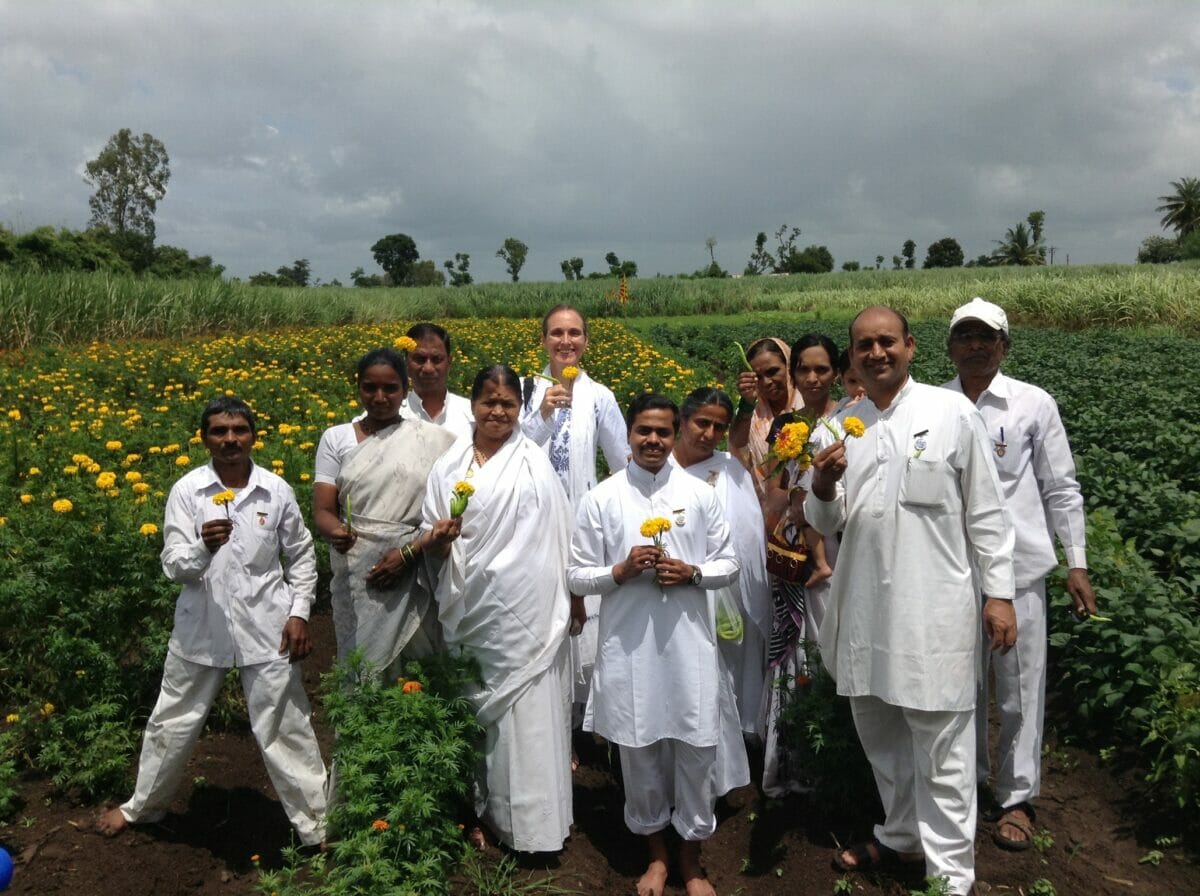 Initially unconvinced that it was effective, Rugge adopted yogic farming in 2005, and he still practices it on his 11-acre farm. “We have great biodiversity on our cultivated land, a great variety of plants and animals, earthworms,” he says. “The yield is great not just in terms of quantity but also quality…Farmers believe that organic farming results in a lower yield, but if you practice meditation alongside organic farming and add your sentiments and positive energy to the process, the yield will be much higher.”

In addition to improving crop yields and quality, the practice is believed to help increase food security, improving farmers’ self-esteem and, as a result, reducing the frequency of farmer suicides and social violence in families and villages.

One of the farmers’ wives Ramsay met during farm visits told her how yogic farming had transformed her husband, who had previously been suicidal and struggled with alcoholism. “Through this practice he stopped drinking; he started meditating; he gained a lot more courage and was much better with his children,” she says. “All of these are real tangible benefits that come with the practice.”

Although he questions the impact of yogic farming on seeds’ success, Ofstehage agrees that some aspects of the practice could yield positive results. “Meditation can be beneficial to any kind of work, including agricultural work,” he says. “It can focus the mind, open up possibilities and center us. I can’t say much about the impact of meditation itself on plant health, but, of course, a meditating farmer may be able to be more creative, mindful and thoughtful about her plants and that they be more attentive to pests, diseases and mildews as well as more creative about how to respond to them.”

The benefits of yogic farming are slowly being discovered outside of India. Piero Senatore Musini, an Italian farmer, has practiced yogic farming on a 200-hectare farm in the Perugia province since 2009, and he has since launched a line of pasta products made with the wheat, spelt and millet his farm produces. Musini’s approach involves ancient non-modified seeds that are neither hybrids nor GMOs. He explained in an issue of W-E Digest how these seeds result in lesser production in terms of quantity but yield better-tasting and more nutritious ground flour.

Giving yogic farming a try is an inexpensive proposition, and one doesn’t need to commit fully to it at first. Ramsay suggests trying the practice on a small piece of land to begin with, perhaps a quarter of an acre or so, and to continue with regular farming methods on the rest of the land. That way, you can compare results and make a gradual transition to yogic farming should it yield results. It takes between two and five years to fully transition.

And even though different practitioners of yogic farming have the same intention, Ramsay suggests everyone bring their own “flavor” to the practice. “That’s encouraged because it should be meaningful,” she says. “It can’t just be a mental exercise. The heart has to be involved.”

You can even practice yogic farming on houseplants or an indoor garden. “One doesn’t have to be a yogi or a guru in order to do this practice,” says Ramsay. “You just have to be able to harness the mind for a little while to create good thoughts. You won’t do it perfectly the first time. It’s a practice, and as you practice, you become better and better.”

When I sow daikon seeds, I repeat a short mantra before it goes into the ground. I use a heavy iron stake to make each hole for the seed. In addition, I treat each daikon seed as if it was the only one I had to plant. Once a week I nourish it with compost tea I brew with Tilapia effluent. Rain does the rest. After I harvest it, I chop, not slice, it into cubes for kimchee I will consume until the next late fall planting. Each fermented cube along with each subsequent chew nourishes my mind, spirit and… Read more »

For those of us who have never practiced meditation, it would be helpful to receive some rudimentary guidance to the practice. We can begin with our plants.
Thank you

Proposers of this type of farming should go ahead in convincing the vast/enormous number of farmers in India through Indian Council of Agricultural Research, New Delhi.

Yes tru yogic farming, cosmic farming we are used last 3 years in my farm . Whole cotton plant and cotton yeald are tremendous up to 2 to 3 times higher than control.

Meditation may very well benefit farmers; farming is a stressful business. But sitting in your corn patch and sending your ethereal energy to plants so they will grow faster and yield more seems a bit contradictory. After all, you intend to murder the plants for their seed and deprive the plant of its life and ability to reproduce. Doesn’t sound so warm and fuzzy now, does it?

You guys have reached a new high in publishing nonsense. Congrats.