Can Lobsters Get High?

And if they can, is it a more humane way of cooking them? A team of scientists tested one restaurateur's theory. 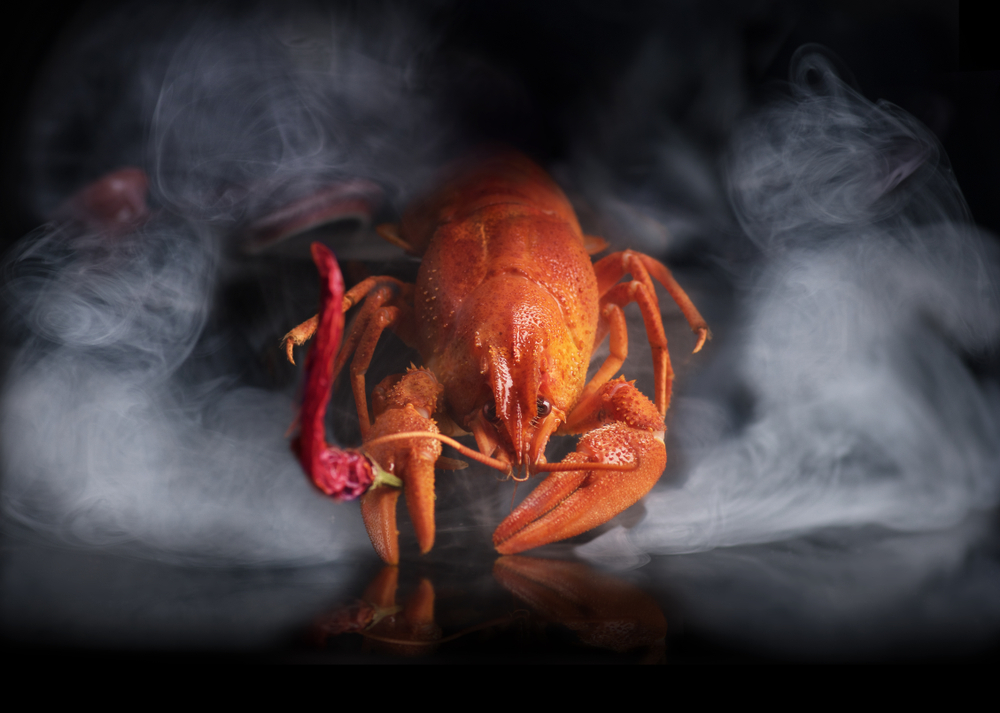 Charlotte Gill conducted smoky experiments on her lobsters in the hope of finding a more humane way to cook them.
Photography by NBB/Shutterstock
Share
Tweet
Pin
Email

How does one get a lobster high? In a tiny, lobster-sized hotbox, obviously. Or, in scientific terms, a sealed exposure chamber.

A team of scientists at the University of California San Diego have written a paper in pre-print (meaning the work has not been published or peer reviewed yet), which looks at the effects of THC, the main compound in cannabis that gets you high, on lobsters. The team tested variables such as locomotion, meaning how much and how fast the lobsters moved, after they were exposed to THC for up to an hour. They also checked to see what kind of reactions the lobsters had to temperature changes and how much THC was present in the lobster tissue after exposure.

So can lobsters get high? The short answer: sort of.

The drugs did impact the lobsters’ motion and movement, resulting in a lot of slow crustaceans. But it didn’t significantly alter their reactions to heat, like the boiling water that live lobsters are traditionally cooked in.

The scientists devoted their research hours to these questions in response to a 2018 media storm, started by restaurateur Charlotte Gill. At the time, Gill, owner of Charlotte’s Legendary Lobster Pound in Southwest Harbor, Maine, wanted to find a way to cook her lobsters more humanely. She experimented with cannabis smoke (she has a medical marijuana license), using an air mattress pump to inundate the lobsters with vapor and says she noticed immediate changes.

“We looked at tail flips and we also looked at, when we cook the lobster, is there a reaction when you put it into the boiling water? And we were seeing no reaction, or very minimal reaction,” Gill says. “Versus what you see if you don’t have any sedation, which is they’re shooting their claws off. They’re climbing over each other to try to get out of the boiling water. It was a dramatic difference.”

Gill repeated her experiments “40 or 50 times.” The lobsters that Gill experimented on were never served to customers, but both she and her father did a taste test after the fact. She says there was no noticeable THC taste and no THC showed up in an over-the-counter urine test that her father took afterwards. However, she says the meat was “sweeter and lighter, because it doesn’t have the same stress hormone or the stress hormone is so minimal.”

In 2018, Maine’s health department told Gill she couldn’t get the lobsters high anymore, due to recreational cannabis still being illegal at the federal level. Now, Gill and her team use a Valerian vapor compound on all of their lobsters, which is a federally recognized food additive. She says this works about 75 percent as well as marijuana in calming the lobsters down.

The team in California concluded that Gill may have been on the right track with her experiments, noting that “the animals also responded in a temperature-dependent manner to the immersion of tail, claw or antenna in a hot water bath.” The researchers found that exposing lobsters to cannabis “by atmospheric exposure” could “induce behavioral [effects],” supporting Gill’s claim.

But the bigger question of whether the weed makes a difference to the lobster’s state of mind? That’s still not clear. “Further experimentation would be required to fully investigate other behavioral outcomes, including anxiety-like measures,” the paper notes.

When Modern Farmer contacted Gill to go over the results of the UC San Diego tests, she was enthusiastic about their progress and had a lot of questions. What strain of weed did they use? (The paper doesn’t specify, but Gill notes that she found the best results with an indica blend.) When the lobsters were exposed to cannabis, was it a full immersion or partial? (Four ten second puffs of smoke every five minutes, as opposed to Gill’s full immersion for three to five minutes.) She even offered to join the university team to recreate the experiment and see if they could get results like the ones she witnessed.

For Gill, the question of lobster sedation is an ethical one. She says that if she can find a more painless way to cook her lobsters, it might open up doors to gentler meat consumption overall. “It sounds corny, but it’s little things that we can do to make the world a better place, to alleviate suffering or mitigate it where we can,” she says.

That might just include sparking up your lobster before the next cookout.

Charlotte Gill is legit. A truly compassionate human being.

Years ago I had a boyfriend who cooked lobsters pretty often so I would blow pot smoke into the bag where they were kept until boiling alive. I love the taste but couldn’t stand the idea that they’d have to endure horrific pain just for a few minutes of my eating pleasure. It’s good to know there are caring people out there who are testing if this will work on a larger scale.